Of all capital ships of the German Kriegsmarine, battleship Bismarck was the most famous one, despite (or maybe because of) having been lost on the first operational mission.

Bismarck was built in Hamburg, Germany. It was the first of a class of two heavy ships, (Tirpitz being the second). These Battleships were the first ones not to be restricted by the post-World War I limitations imposed by the treaty of Versailles. The new ships were to be in the 45,000-ton limit, much bigger than any other ship in service with the German Navy at the time, and featuring guns and protection of similar scale to those of the best foreign combat ships.

Bismarck was commissioned in August 1940 and spent the rest of that year running trials and continuing her outfitting. The first months of 1941 were largely devoted to training operations in the Baltic sea.

In May 1941, Bismarck was sent out to the Atlantic for her first combat mission, accompanied by the heavy cruiser Prinz Eugen. It would begin with an outstanding success. On the morning of May 24th, while west of Iceland, the German vessels encountered the British battlecruiser Hood and battleship Prince of Wales. In the ensuing Battle of the Denmark Strait, Hood blew up and sank after a very short engagement, the seriously damaged Prince of Wales was forced to retreat. Bismarck also suffered some damage resulting in fuel leaks.

Having been detected by the Royal Navy, Bismarck began a voyage toward France, where she could be repaired. In the meantime, the British developed a massive chasing operation involving no less than 7 battleships, 2 aircraft carriers and over 90 other ships. The Bismarck was found and attacked by carrier planes and surface ships, ultimately sustaining a torpedo hit in the stern that rendered her unable to steer effectively. British battleships and heavy cruisers intercepted the crippled ship on the morning of May 27th. After less than two hours of battle, shells and torpedoes had reduced Bismarck to a wreck. She capsized and sank, with the loss of all but 110 of her crew of some 2300 men. 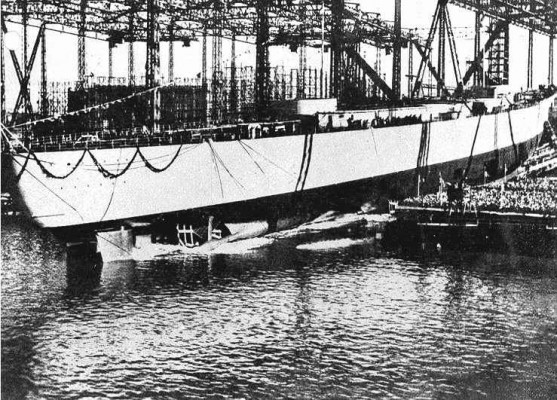 Bismarck was built by the Blohm und Voss shipyard in Hamburg. The completed hull was launched on February 14th, 1939. The launch ceremony was widely publicized by the Nazi propaganda at the time. The ship was christened by Dorothea von Loewenfeld, granddaughter of the German chancellor Otto von Bismarck. 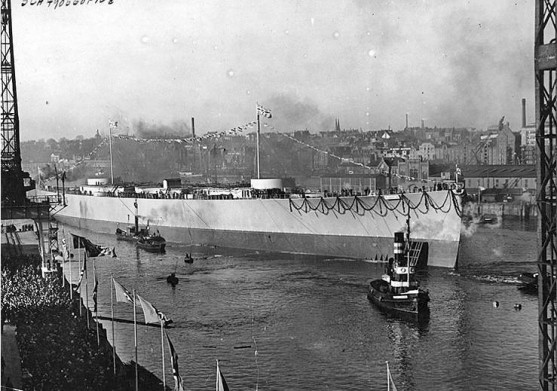 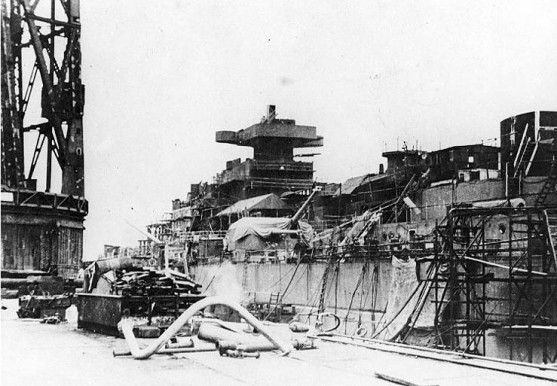 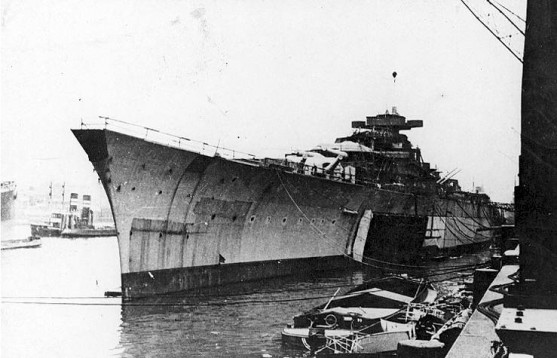 Fitting out at the Blohm und Voss shipyard. This view shows the extent of the ship’s side armor and the newly-installed ”Atlantic” bow – compare it with the short bow visible on the previous photos. 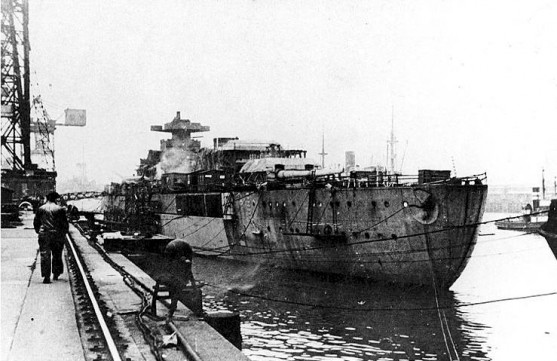 Another photo taken at the shipyard in late-1939, this one shows details of her stern and the extent of her belt armor aft. 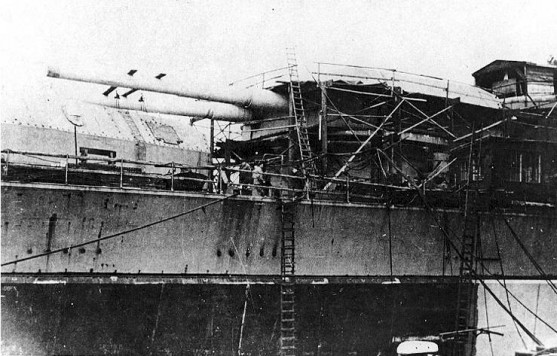 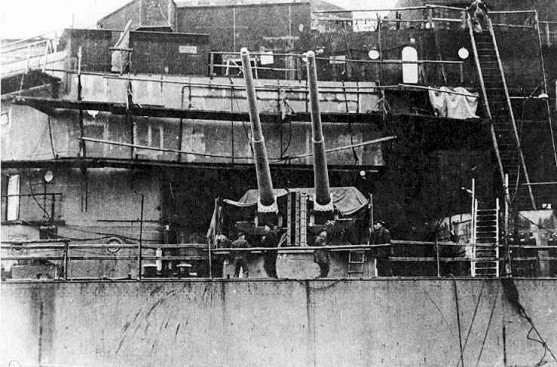 Port forward 150mm twin gun turret in the process of installation, with the ship’s forward superstructure behind. 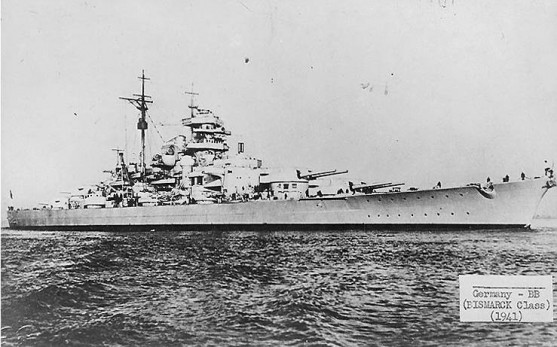 Photographed around August 1940, when Bismarck was first completed.

Rangefinders atop her tower and conning tower have not yet been installed.

Leaving the shipyard the bettleship was painted in light grey overall, with superstructure in pale grey or white. 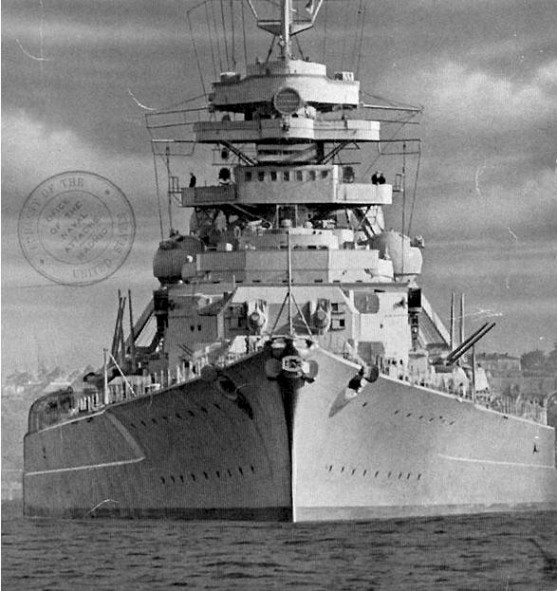 A most spectacular view of the Bismarck taken for the press around August 1940, still prior to installation of the rangefinders atop her tower and conning tower. This photo shows to advantage details of the superstructure. Note also the prominent contour of the armor belt on the hull.

This particular image appeared in a Spanish publication, circa 1941, and was forwarded to the US by the U.S. Naval Attache, Madrid, whose stamp appears at left. 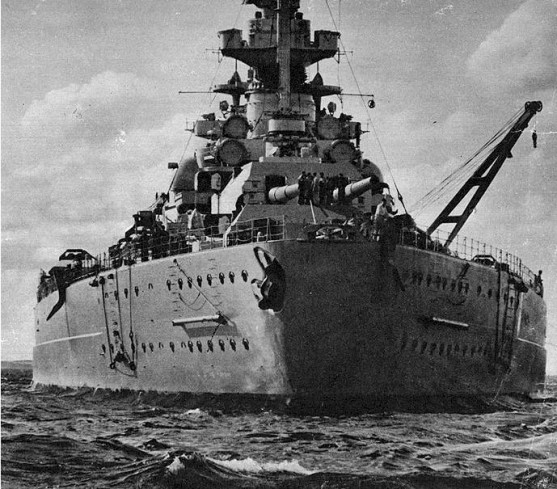 Bismarck photographed from astern, showing stern anchor in its recessed well, folding propeller guards, armor belt and other details of hull and superstructure.

Another copy from the contemporary press, this time German magazine. This photograph too is believed to be taken around August 1940, and the rangefinders are missing also in this view. 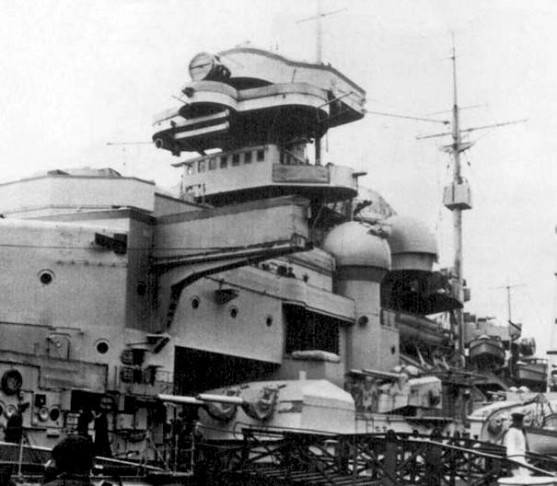 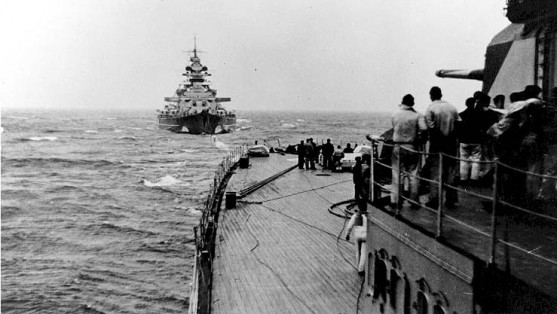 Bismarck seen from the heavy cruiser Prinz Eugen as the two ships practice towing and refueling by trailing hose in the Baltic, April-May 1941. 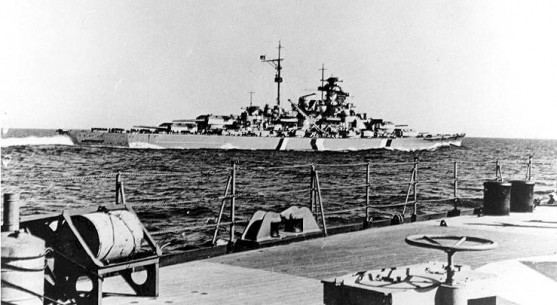 One of the better photographs of Bismarck in her operational guise, it shows her at sea en route to Norway, circa 19-20 May 1941, prior to her Atlantic sortie. It shows the camouflage pattern applied on top of the original grey scheme, including the false bow and stern intended to conceal the true size of the ship. The deck visible in the front belongs to Prinz Eugen. 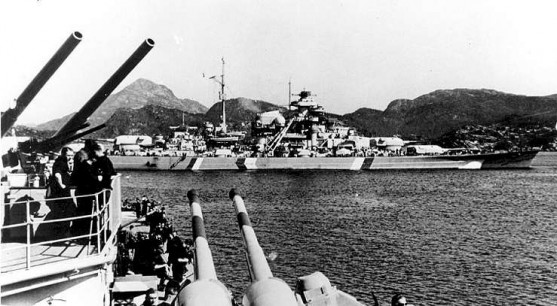 Bismarck and Prinz Eugen took a temporary stop in Norway enroute to the Atlantic. Here they are in a Norwegian fjord Grimstadfjord, south of Bergen, on 21 May 1941.

It is claimed that Bismarck’s camouflage was painted over before she departed the area. 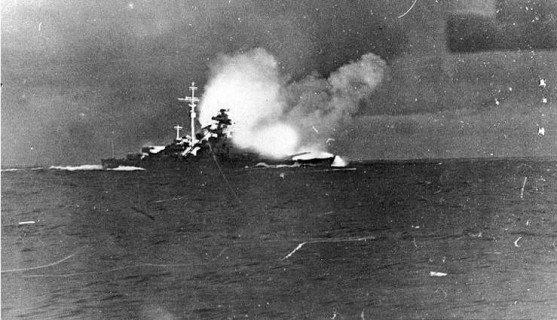 Bismarck in action against HMS Hood and HMS Prince of Wales during the Battle of the Denmark Strait, 24 May 1941. 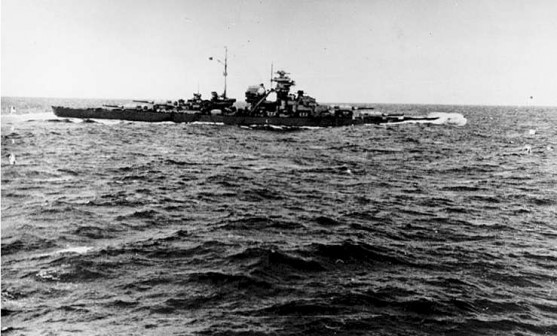 Photographed from the heavy cruiser Prinz Eugen on 24 May 1941, following the Battle of the Denmark Strait and before the two German ships separated, this is the next to last photograph of the Bismarck ever taken by the Germans. It shows that Bismarck is somewhat down by the bow, the result of hits received in her engagement with HMS Prince of Wales and HMS Hood earlier in the day. It has been for this reason Admiral Günther Lütjens decided to seek the nearest harbor on the French Atlantic coast.

Note that the prominent black-and white camouflage stripes seen on the previous photos are not present on this picture – the evidence that Bismarck was repainted during its stop in Norway.