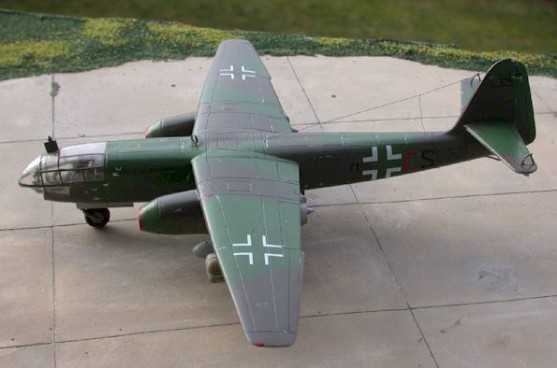 Well, I’m no Experte, I do not possess a vast reference library, so I will cut my remarks short.

The Arado 234 was a revolutionary airplane, the first operational twin-engine jet bomber. Its development was rather protracted, not unlike that of Me 262, yet hampered additionally by low priority in engine deliveries. The design was submitted to the RLM in 1941, yet the first flight was only in 1943. Emphasis was laid on an aerodynamically clean shape, and this aircraft sure is a looker.

But as in other cases, there was some peculiarity of the design that ate up much of the good things in it. Just take the obsession for dive bombing that plagued amongst others the Heinkel He 177. In this case, it was the undercarriage. Primarily it was planned not to use a conventional undercarriage; instead the designers relied on a jettisonable start cart and a landing skid à la Me 163; this formed problems of its own when the start cart did not separate properly or the landing skids did not work as desired; moreover somebody finally noticed that the freshly landed Ar 234s, immobile as they were, would block their airfields and be easy targets for enemy fighter-bombers.

So the design had to be revised in 1943. The wheeled version, its fuselage widened and its fuel tanks enlarged, became the B-model. It was only in the spring of 1944 that the serial production could commence. The Ar 234 B was produced in recon, bomber fighter and night fighter versions; as a bomber, it could carry a big SC 1400 bomb of 1400 kg under the fuselage plus two bombs of 500 kg under the wing hardpoints, although these were rather used for auxiliary fuel tanks, the bomb load limited to 1500 kg. At full load, the thrust of the Jumo 004 engines was not really sufficient, so Walter hydrogen peroxide rocket assisted take-off pods were installed. Later on, the C-series was built with four BMW jet engines to overcome this weakness.

With its superior speed, the Arado couldn’t be easily intercepted; it was vulnerable mainly during take-off and landing. Ar 234´s were helpful for the Germans as bombers and reconnaissance planes as well, yet on the whole it was a matter of too little too late. The plane was introduced with the Luftwaffe only in the final phase of World War II with imminent fuel shortages and growing Allied air dominance. The Ar 234´s destruction of the bridge at Remagen in March 1945 is the most memorable combat use of this plane, but beside bombing, the few recon Arados helped German commanders gather information about allied moves that could not be obtained with conventional aircraft.

The remaining Ar 234´s were of course highly sought by the Allies, a number of them were flight-tested and surely gave impulses towards post-war bomber development. At least one is preserved at the National Air and Space Museum, Washington, DC. 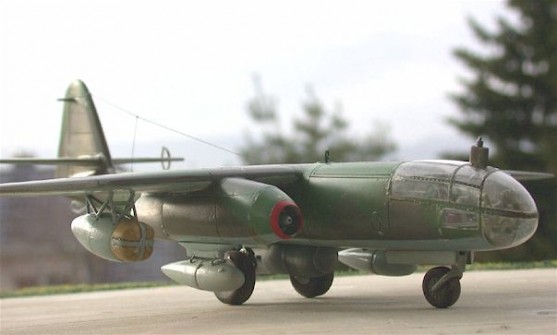 Well, as I already mentioned, I had been warned, and by no one less than by your editor Martin Waligorski. He had kindly suggested not to build this kit, but rather the new issue by Hasegawa. Too late, Martin! I had bought this kit back in 1996 and now it was too late. I had no inclinations to trash it or try to sell it, so I opened the box and began.

Well, it was my first Hobbycraft kit, and I had read many rather disrespectable words on the products of this company. What I found was a sturdy box with a real lid, no Revell &§$%§/& end-opener. Inside were the various sprues of the basic kit, plus extra sprues for the night fighter version that had been produced in 1945 and used by the Kommando Bonow operationally to a limited extent. Decals are for a plane from Kommando Bonow in night fighter camouflage of RLM 76 overall with mottling of ”RLM 74 or 75” per instructions. This plane is marked only with its Werknummer. Additional decals are for a plane from Kommando Sperling with ventral gun pack. This plane is coded T9+EH and painted RLM 81/82 over 76.

I have read that the kit is correct in size and outline, 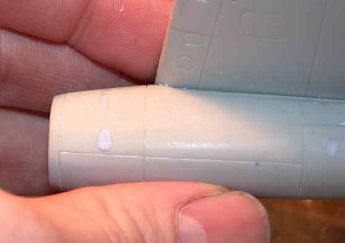 and it sure depicts what is important. You get a BIG bomb, two auxiliary fuel tanks and two RATO units (RATO = Rocket Assisted Take Off). These Walter HWK 500 R-Geräte were used to provide additional on take off. The inclusion of the ventral gun pack and the additional parts for the night fighter is a nice thing, too. What is missing is the camera installation and the rearward firing guns that were implemented early in the series, but with what is in the box, you can build a wide array of planes.

On the down side comes the overall simplified layout of the parts, but on the other hand, this is not a new Wunderkit, so try to measure it by appropriate standards. What really annoyed me were the numerous sink marks and the overall lacklustre fit. Now this was kit to use quite some amount of putty on, and I didn’t get away with wax as often before. The panel lines are recessed , yet they are deep. The clear parts are a bit thick, and mine did not fit nice at all. The tyres are rather crude and have no tread marks at all.

Working through the kit

So I set myself to work, building subassemblies as was possible. 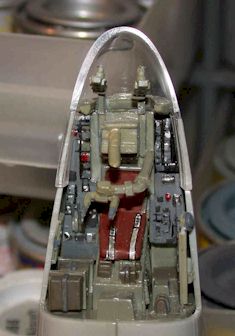 The cockpit is a nice affair, and I added aluminium foil to the decal seatbelts to give them some body. The fit of the cockpit assembly wasn’t good, and I had some trouble with the front gear housing that fits under the pilot’s seat. The cockpit was sprayed RLM 02, the seat was painted Siena, bits and pieces were picked out with black, red and silver. I added some weight to prevent my plane from tail-sitting and glued the fuselage. I made a mistake with the engines in not gluing the exhaust cones before mating the halves. So I had to cut the crossed parts of the exhaust cones to make them fit into the exhaust opening. The wings were a nice fit.

I had glued the canopy before beginning cleaning up the seams, and had tried to overlook its poor fit. Finally, I faced it and ordered a Squadron vac replacement. Well, it was my first attempt, and I might have chosen a simpler thing. The vac was in two halves as the kit part, yet also required sawing off a part of the front fuselage. I wrestled with this thing for quite some days, I must have glued it six or seven times, with white glue and super glue. In the end, I somehow managed it to fit, especially between the two halves (glue this thin SOB together, holy Moses!) and swore I’d immediately trash the model if anything came loose again. Oh, did I mention I broke off one of the foot pedals and had to make a new one and that I fought with the instrument panel like mad? I did.

I sat down one evening and put the decals for the canopy framing in place. 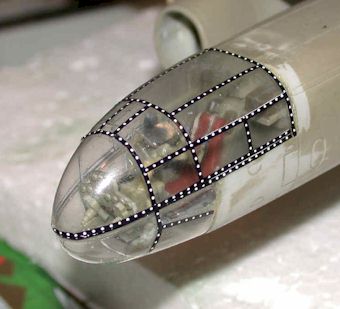 Having done this, I Futured the canopy and masked it with Parafilm M, quite gently cutting the framing with a fresh X-Acto blade, always with breath held and getting slightly blue in the face. Since the framing was in black, I wanted some overspray of the camouflage to have it better looking. The Aeromaster decal sheet I had bought had decals for the rivets of the canopy framing only, and I didn’t use those as I needed the black decal material for cover-up purposes.

Having won the fight with the canopy and cleaned up everything, I added the various fiddly bits (mass balances for the control surfaces – hey, I lost and had to recast just one – crazy putty and dental resin) and the RDF antenna. The landing gear was left off until later. Next, I primed the plane with some greyish-brown enamel, checked for flaws and touched them up.

Next, I sprayed the entire thing Model Master aluminium metalizer and buffed it lightly. Then it was time for the camouflage. I used Xtracolor gloss enamels and sprayed the plane first RLM 76 over the undersides, plus the RATO´s and fuel tanks which were separate at that stage. Next came masking the undersides using Parafilm and Maskol. When that was finished, I sprayed the plane overall RLM 83, waited to dry and then did the splinter camouflage per instructions using post-it notes cut to fit individually. That part was just a breeze and took a happy 45 minutes or so.

The plane was now sprayed clear gloss in preparation of the decals. I had bought an Aeromaster sheet (which I will use again for my next Hasegawa Arado, as it contains full markings for three planes) and made a plane of KG 76 of Remagen fame, F1+CS, as it had the most colourful paint scheme with red intake rings. The decals worked just fine and made no problems whatever. I left off the Swastikas as they are illegal in Germany. The decals were sealed with more gloss coat, and then the plane was sprayed with flat coat to achieve the desired irregular semi-gloss sheen. Before completing this, I had installed the landing gear, the fuel tanks and the RATO´s.

I did some weathering, following these thoughts: Although the operational history of these planes was only short, they were used in winter and probably without due maintenance. I therefore assume they would look worn off sooner than in former years of the war. I therefore had already done some pre-shading before spraying the camouflage, and weathered the plane with a wash with diluted artists’ oil paint, did some very limited paint chipping at areas prone to wear such as the surroundings of the fuel tank caps and the intakes. BTW: I have sprayed the rear part of the engines Model Master steel metalizer, although I have read that a dark grey would be more appropriate. Well, I thought it looked cooler anyway and figured out that paint would probably burn off the heated exhausts. Correct me if you know better.

With the wash and some paint chipping down to the metalizer underneath, the plane looked sufficiently used. I only added some dirt with pastel chalks on the wheels (the tyres had been sprayed Model Master rubber) and on some parts of the underside where I supposed that mud would be splashed to.

Then I removed the masks from the canopy and was extremely happy when they loosened well without ripping away the canopy.

Finally, I made aerials from thin stretched black sprue. They were glued with cyanoacrylate glue, tightened with a heated waxing instrument, the isolators were made from beads of super glue painted grey.

In the end, I had won. There have been many moments when I was on the brink of trashing this model, but finally I persevered. It doesn’t look perfect (none of my stuff ever does), but it looks like a Ar 234 and I like looking at it from a distance 😉 Having so many decals, I will sure build another 234 some day, but this time giving the Hasegawa offering a try, or perhaps the new Revell AG. But stop, that one has four engines! OK, so be it, Hasegawa will receive my Euros.

All in all, this kit, if you could get it cheap, would surely be an alternative to the newer offering, but only if you are willing to invest some work into it… 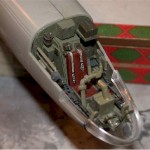 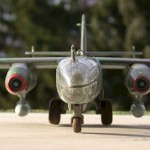 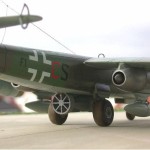 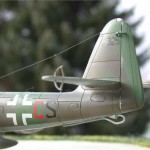 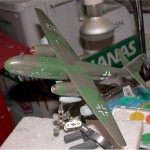