Hoppa till innehåll
Hem » Artiklar » On Holidays in the UK

I am a happy Anglophile, and a large part of the attraction of Great Britain (apart from the chance to have fried bacon, fried eggs, fried sausages, fried tomatoes and fried potatoes for breakfast) is the hobbyist-friendly nature of the land and its inhabitants. So in the summer I, my son Alvin and my friend Harald set out for England and a week of aircraft, trains and rusty bridges. We travelled some 800 km by train, which is the way I think one should travel through England and, since we qualified for a family rail card, also quite cheap.

Our first stop was Duxford. The Imperial War Museum has several branches, the main one being in Lambeth in London, the other branches being HMS Belfast, the cruiser moored to the Southwark quay in London, the Cabinet War Rooms in London, the IWM North in Trafford in northern England and IWM Duxford. Duxford is the physically largest and definitely the busiest. Duxford has been an RAF airfield since 1918 and during the Battle of Britain was home for Douglas Bader’s Duxford Wing and from 1943 the USAAF 78th Fighter Group was based here.

In the post-war period Duxford was gradually wound down and was all but closed down in the 1960s, but rose to new life, partially inspired by the filming of The Battle of Britain at the site in 1968. IWM and the Duxford Aviation Society opened on the site in 1977.

The fantastic thing with Duxford is that not only is the IWM on site, but also the Duxford Aviation Society with museum aircraft of their own, The Fighter Collection and The Old Flying Machine Company with flying warbirds, and other private operators, so Duxford is always a hive of activity and one is more likely than not to see at least one ancient aircraft in the air during a visit. At the far end of the airfield is the Land Warfare Hall for those who are interested in machines that make noise on the ground. Full listings of the collections can be found here.

During the summer season there is a regular programme of airshows at Duxford and we were there for the Flying Legends Airshow. 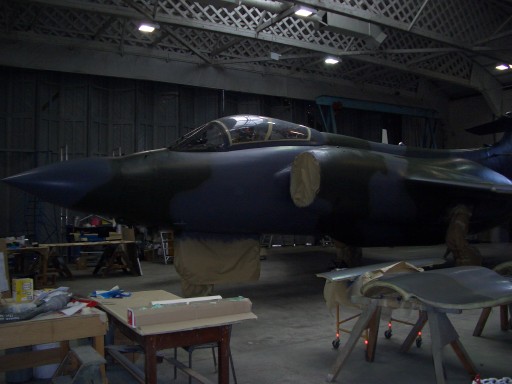 There is constant restoration work at Duxford. Here is a just-painted Buccaneer in one of the hangars.

Flying Legends is one of the largest, if not the largest conglomeration of flying warbirds. The airshow takes place over a weekend in midsummer and all roads leading to the airfield are clogged with the cars of the visitors, but once they get there, the organisation is very efficient and one quickly gets inside.

For a modest additional fee, one can get up by the flight line close to the aircraft, for a bit more, inside some of them, and for quite a bit more, you can get a flight on others.

In the course of a day, all the planes go up, sometimes solo, but more often on formation flights. The grand finale is the massed formation flight of all aircraft – it seems they have to turn around all Hertfordshire to get all planes in line. 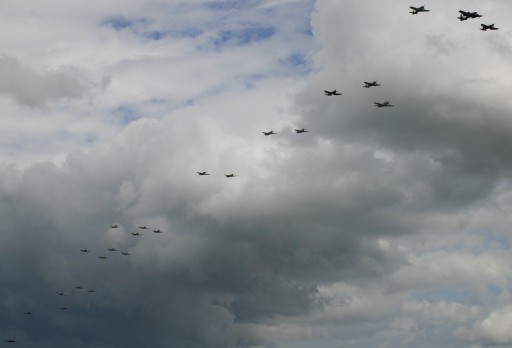 You would need a very wide-angle lens to capture all of the Balbo formation.

The Grumman Tigercat is a very narrow-bodied aircraft.

If you need to rest your neck a bit, you can wander the shop street, with any number of hawkers selling books, paintings, models, flight gear, more books, toy aircraft, kites, even more books, lots of paintings, memorabilia, videos and whatever else you might wish for. (The one complaint might be that the food opportunities are not that great, there are hamburger stalls and the museum restaurant, but the choices are fairly limited – a picknick basket might be indicated.) 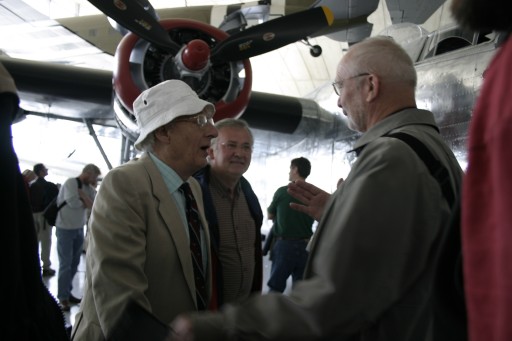 A de Havilland Dragon Rapide, one of six in the air.

Getting to and staying in Duxford

The best way to get to Duxford is probably to fly into Stansted airport, take the train to Cambridge and stay at one of the nice Bed & Breakfasts and take bus C7 out to Duxford and spend one or two full days there. (Cambridge in itself is also worth a spot of touristing.) Note that during airshow season it is quite difficult to find lodging in the area, so book well in advance.

Here we are, looking at the bizarrely offset nose landing gear of the Hawker Siddeley Trident. Behind it a Dutch Neptune. On the side some of the school children visiting the museum are having lunch.

The RAFM also has several sites. I expect most have been to the one in Hendon in London, but there is also one at RAF Cosford. Cosford is an active base and in fact one has to walk a couple of kilometres from the entrance through the base to get to the museum. The special features of RAFM Cosford are for one part a large collection of civilian aircraft in British Airways livery, a collection of test aircraft, lots of models of British aircraft, and then various other aircraft. There is also a separate aerial photo museum.

The experimental aircraft hall, with a TSR 2 left of centre. The Fairey Delta 2 pokes out its nose at the left.

One of the larger civilian aircraft, a Bristol Britannia.

There are occasionally airshows at Cosford as well, but the day of our visit was a quiet day, with only two or three school classes visiting the museum. We foreign-speaking people were apparently very exotic to the school children.

Cosford has its own railway station inside the base which is the recommended way to get there. There is not very much in the way of accommodation around Cosford itself; we stayed in Albrighton, which is within (European) walking distance of Cosford, but one might choose to stay in Wolverhampton or Telford. Telford is of course the site of the Scale Modelworld, the IPMS UK Nationals, so a visit to the museum in combination with a visit to the Nationals is easily arranged.

And now for something completely different: A museum railway in Wales.

At Machynlleth one can get on the train to Aberysthwyth. The train will wind its way along the shores of Cardigan Bay, quite often on a shelf just above the waves. Every now and then it stops at one of the popular Welsh holiday resorts and at one point it passes Royal Aerospace Establishment Llanbedr where, if you are really lucky, you might see a Jindivik target drone take off and fly out over the sea to a rendez-vous with a waiting fighter aircraft. 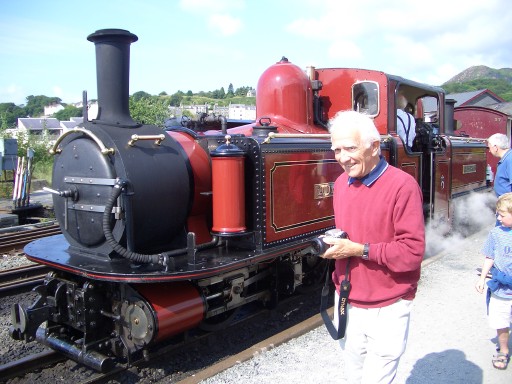 David Lloyd George, one of the unique double-ended Fairlie patent locomotives on the Ffestiniog Railway at Porthmadog station. Train spotters get very happy when photographing these.

Porthmadog [port ma’doc] is one of these picturesque little towns by the bay, but in the early 20th Century it was a very busy harbour. Thanks to this it is now the endpoint for no less than two museum railways. The one we came there for was the Ffestiniog Railway, which is a narrow-gauge steam railway which was used to transport slate from the slate quarries in Blaenau Ffestiniog down to Porthmadog harbour, but after the slate industry collapsed in the 1920s it was moribund for several decades. The railway was saved by the museum society in the 1950s and is doing very well these days. On our early morning ride all seats were full on the train, with happy families out for an exciting trip. 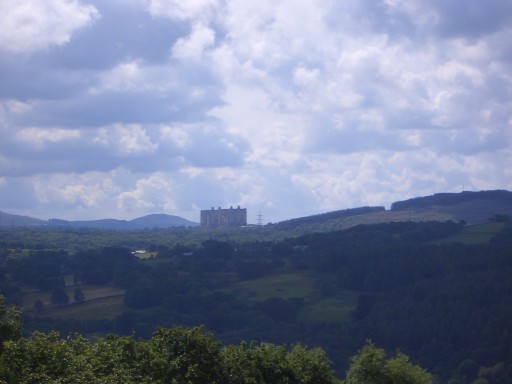 The Welsh mountains. In the distance you can see the romantic silhouette of the nuclear power plant in Trawsfynydd.

The track meanders up the side of the breathtakingly beautiful river valley to Blaenau Ffestiniog. There are several stations along the way and it is an excellent idea to stop off at one of these and then continue with the next train – in the summer the trains run quite often… 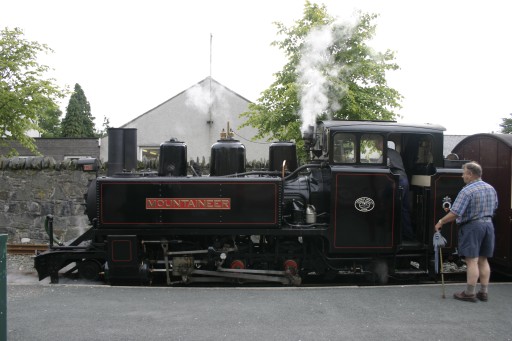 Some locomotives are single-ended. This is photographed at Blaenau Ffestiniog station.

There turns out to be a unexpectedly good hobby shop in Blaenau Ffestiniog, so one can spend the stop-over there before going down again. (I didn’t write down the address, but there is only one large street in the town, so you can’t miss it.) 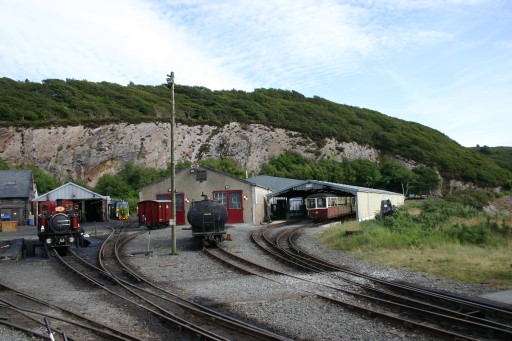 Some more of the rolling stock of the Ffestiniog railway.

There is a war cemetery in Porthmadog, with memories of the some of the many pilots who underwent training in Wales during WWII and later.

We stayed in Porthmadog, which has a decent selection of hotels and Bed & Breakfasts, but an alternative might be to stay in Blaenau Ffestiniog instead. The normal-gauge train runs north from there and one might consider a visit to Bangor, where there also is an aviation museum. 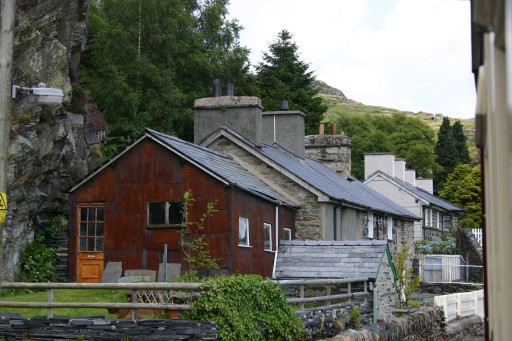 A challenge for the weatherers – that’s rust on that house. 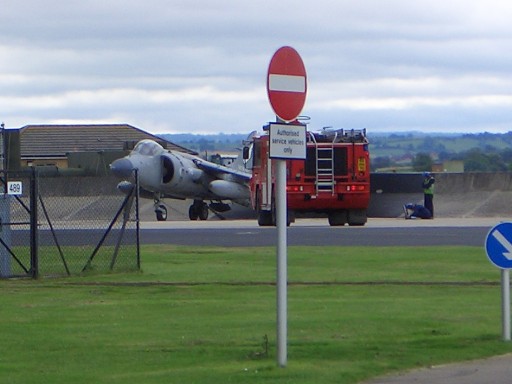 When we arrived at the museum some mechanics were running engine tests on a Sea Harrier. They kept doing this all morning. 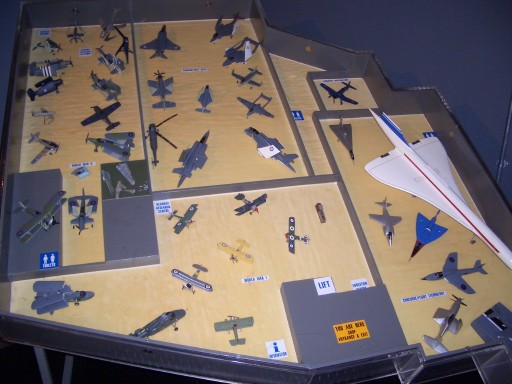 A nice touch: the orientation board for the museum is composed of 1/72 models.

Royal Naval Air Station Yeovilton is also an active airbase and there is constant activity both on the apron and the runway. While the museum is mainly oriented towards naval aircraft, the Concorde hall contains a Concorde prototype and several test aircraft related to Concorde development.

The Concorde Hall. We can see the top of a Harrier Trainer; the blue aircraft is the BAC 221 and behind it is a Hawker Kestrel. At the lower left you can see me photographing. 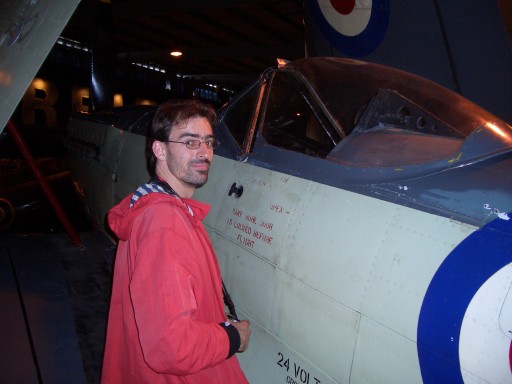 There are no barriers in the museum, Harald gets up and close with a Seafire.

A very special attraction is The Carrier Experience: The visitors step inside a Westland Wessex helicopter (the Westland factories are located right outside Yeovil) and after some minutes of noise and shaking one can exit on the other side, finding oneself on the deck of a British aircraft carrier with examples of all the post-WWII carrier aircraft used by the Royal Navy. A Phantom standing to a side is prepared for take-off by animatronic dolls and moving parts and right at the moment of take-off the spotlights are switched off and a film of a starting Phantom is projected on the wall. After a while, a Buccaneer comes in for landing as a film on the opposite wall. One can then continue ”inside” the carrier, which contains reconstructions of (some of) the important parts of a carrier, briefing rooms, mess, ops room, bridge, etc.

The carrier deck. The Phantom is off the right side of the picture.

As in all other British museums, there are scores of school children visiting every day. Here are the five coaches that brought school classes. The museum playground was temporarily closed while being renovated, but the children on lunch break managed to enjoy themselves anyway.

Yeovil is the large town closest to Yeovilton. Getting there by rail is something of an adventure, as both railway stations are outside the town proper. Yeovil Pen Mill station is within walking distance of the town centre, but Yeovil Junction, which is the most suitable connection to London, is a short taxi trip away. Do not miss the opportunity to have a snack and a chat with Millie in Millie’s buffet at Yeovil Junction station.