In the heady days after the Second World War, experimentation with jet engines and new wing configurations was rife and lots of futuristic designs were tested and even more proposed. Fairey started experimenting with delta aircraft with the Fairey Delta 1 in 1950. The experiences from this was used in the development of the more advanced Fairey Delta 2 which was first flown in 1954. The first prototype was serialled WG774.

A second F.D.2 prototype, serialled WG777, was first flown in 1956. Both aircraft were used for test flights through the rest of the 1950s.

Meanwhile, development work on the BAC/Sud Concord(e) had begun and BAC received permission to modify WG774 to test the untried ”ogive” wing. WG774 was transferred to BAC in 1960 and a rebuilding program started, giving the aircraft the new wing, a longer body and taller landing gear, so it was with good reason that the new aircraft had been renamed the BAC 221 when it was reflown in 1964. However, by this time construction of the Concorde was already well underway, so the BAC 221 was too late to really give any input to the wing design process. Still it was used for other tests until it was finally retired in 1973.

Today Fairey Delta 2 WG777 resides in the Royal Air Force Museum Cosford and BAC 221 WG774 in the Fleet Air Arm Museum in Yeovilton. This is also where the following pictures were taken. 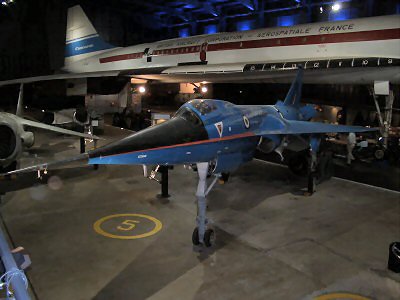 The BAC 221. As befits a speed-record aircraft it is very glossy in a pretty blue colour. Note the black and white stripe over the back – the colours are reversed on the other side – and the very prominent ejection seat warning triangle. Under the wing the Rolls Royce Avon engine is exhibited. Behind the aircraft we can see the somewhat shabbier Hawker P.1127.

The pitot head with angle-of-attack indicators. Note the non-glossy tip. 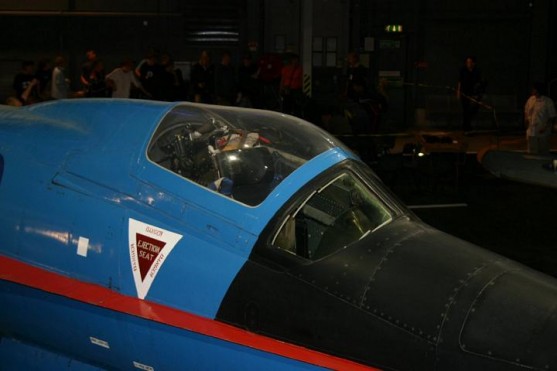 The cockpit was very difficult to get a decent picture of due to hood glare, this was the best we could do.

The BAC 221 already in its F.D.2 incarnation had a ”droop snoot”, just like the Concorde, and we can make out the joint behind the cockpit, but the seam, as all others, is so carefully made as to be all but invisible. 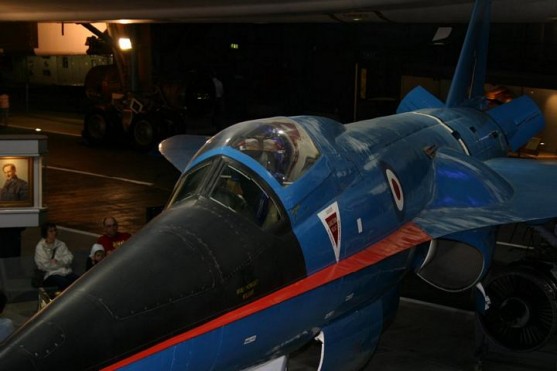 Another angle, also showing the bulges for the engine air. 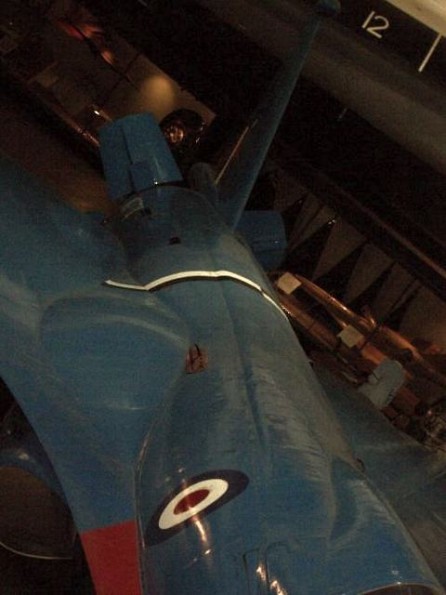 Moving up a bit, unfortunately a bit dark. The black-and-white field over the spine and its colour reversal is clearly visible. The somewhat rusty ”handles” on each side of the fuselage hint that the aircraft probably has been displayed suspended from the ceiling at some point, possibly during its period at the Museum of Flight at East Fortune. 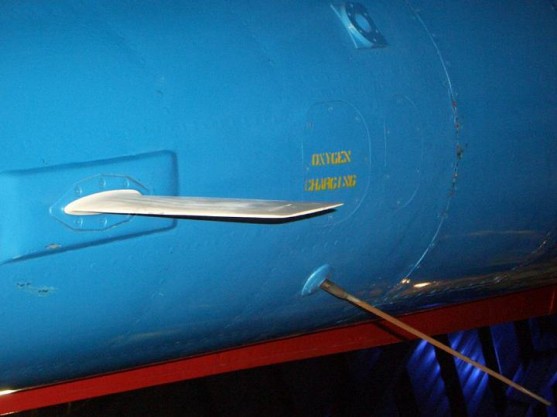 Some antennas under the nose (the red strake visible in the background can help with orientation). 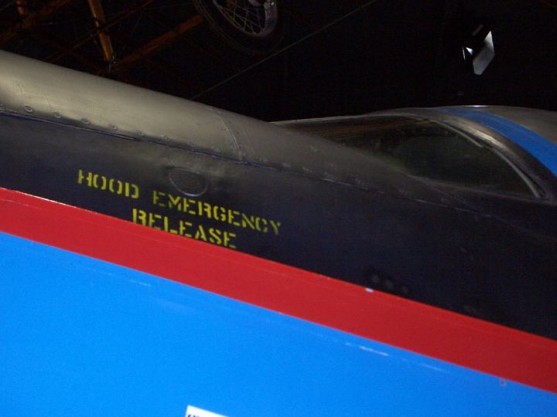 Raising our eyes a bit towards the cockpit. 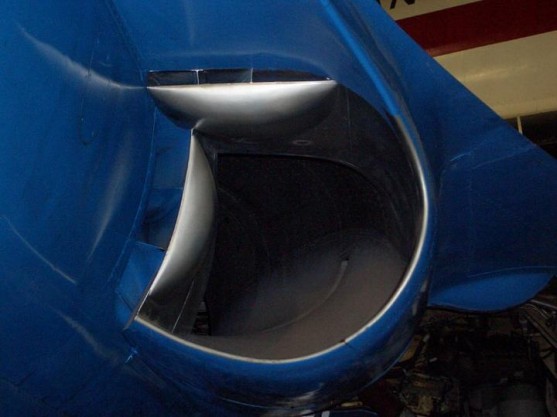 Turning right towards the port air intake. The air path is highly curved, so you would not see much of the engine even was it still inside. 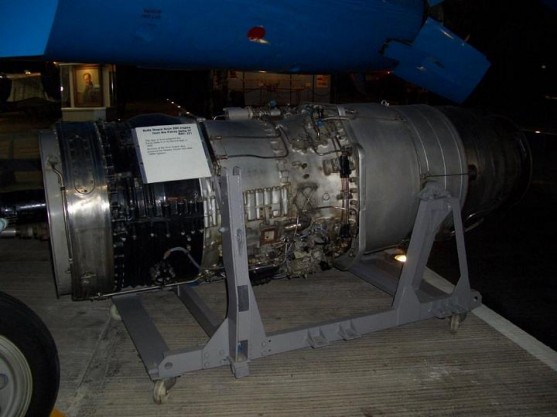 Here is the engine, a Rolls-Royce Avon 28R. 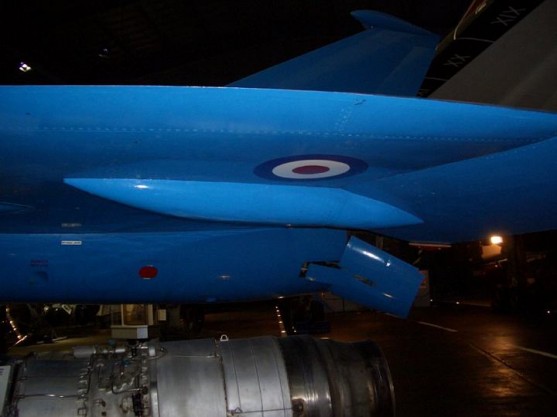 The port wing. Note how the tail end part of the elevon actuator fairing slides in almost completely seamlessly into the front part. 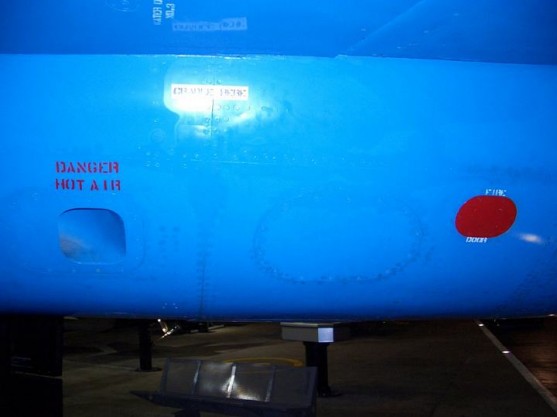 Moving in under the wing, some hatches and exhausts. They are mirrored on the starboard side. 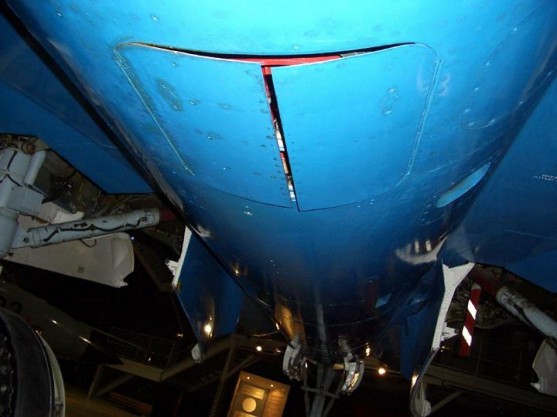 Just behind and below those hot air exhausts is a mysterious hatch, just hinting at something interesting inside. This picture also gives a good view of the landing gear arrangement. 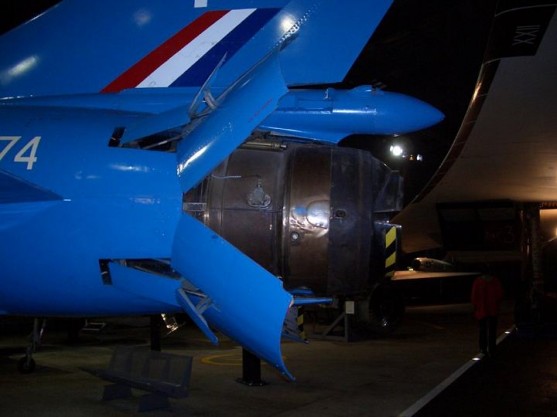 The jet exhaust and air brakes. The exhaust has variable area but I believe it does not reverse. The bullet above contains the braking parachute. 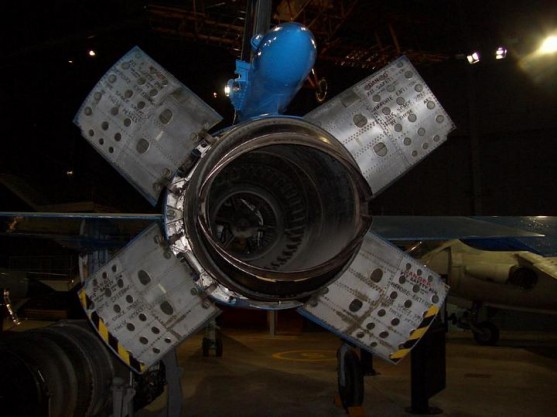 A very impressive view from the rear – the air brakes seem very capable of doing their job. Note the stencilling:

The black-and-yellow tapes are warnings added at the museum. My guess is that the things sticking out from the port side of the parachute fairing are related to an anti-spin parachute added (probably) in 1965. 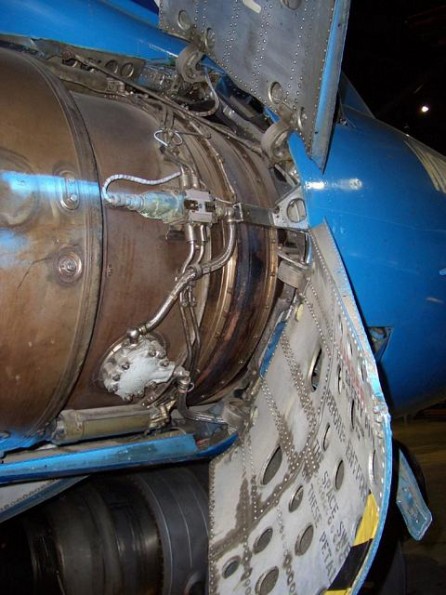 A close look on the air brake mechanism. Here, too, we see evidence of paint having blown in through cracks when the aircraft was painted… 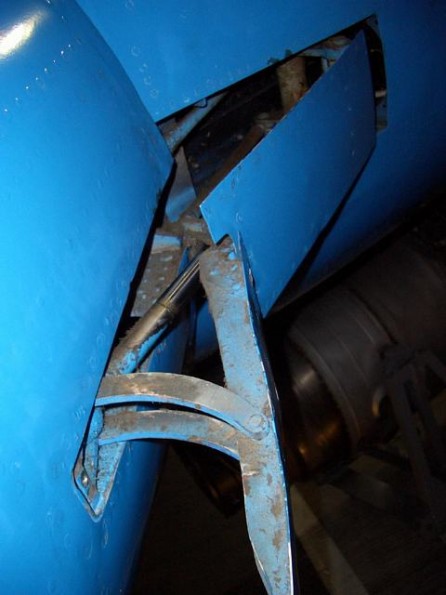 The air brake actuators. The pistons look fairly scuffed and worn, but it seems a fair part of the discolourations visible in the interior is simply museum dust! 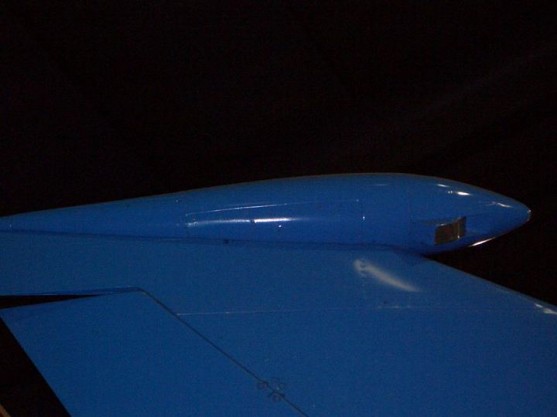 The top of the fin from the starboard side. The bullet contains a cine camera for recording air flow over the wings, the window for which can be seen underneath the front part. Note that it is offset to this side. 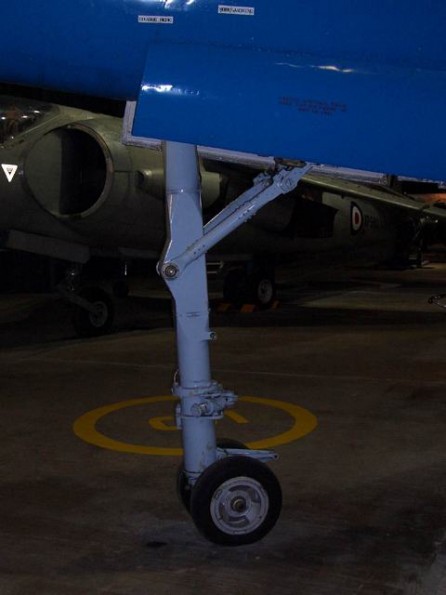 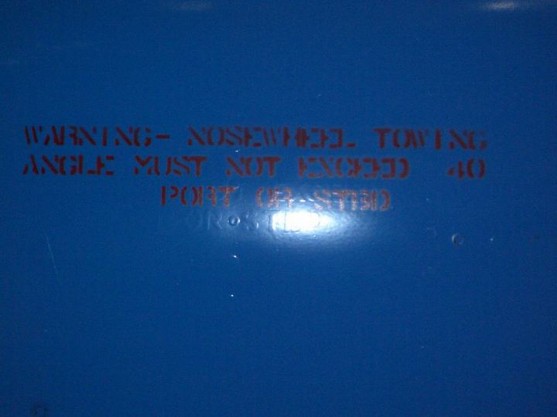 Moving in to have a look at that stencil on the undercarriage cover. The flash reflection is not so elegant, but it brings out a very interesting detail: the earlier application of the same stencil text, but slightly offset. Possibly this is from the F.D.2 period, when the plane was finished in unpainted metal. 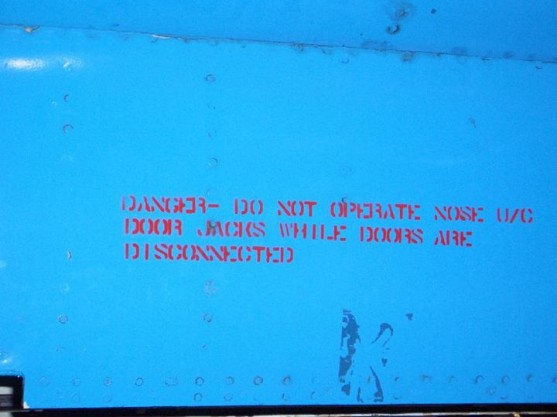 This is the stencilling on the second set of nose gear covers, tailwards of the first we saw. The BAC 221 rebuild necessitated a considerably taller undercarriage than earlier. 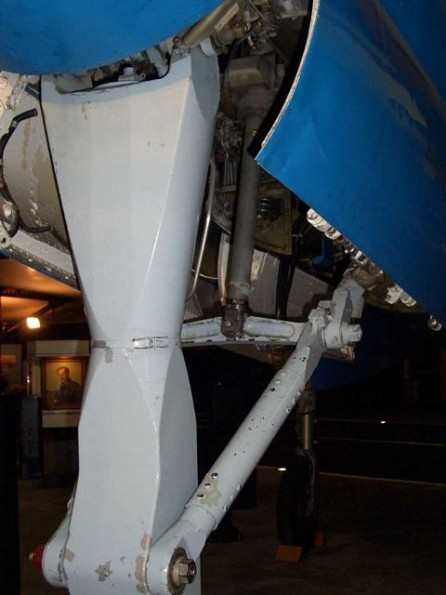 A three-quarter view of the nose gear. It is a very sturdy construction of high-tensile steel. It has been painted in light grey, but there has been a bit of paint chipping around the joints. We can also see parts of the rather complex retraction mechanism. The gear well covers appear to be painted in the same light grey on the inside surfaces and are also scuffed here and there. 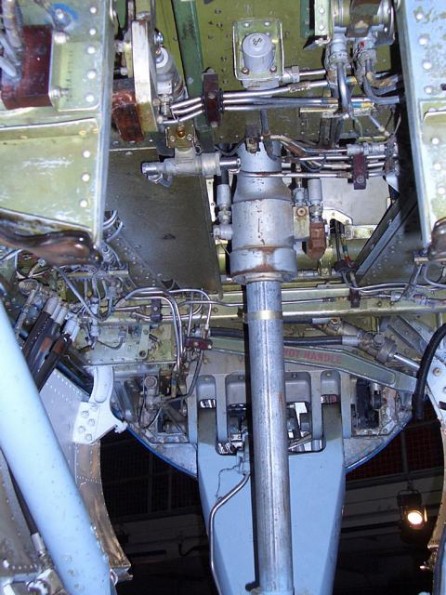 Standing inside the nose gear bay, looking towards the nose of the aircraft. 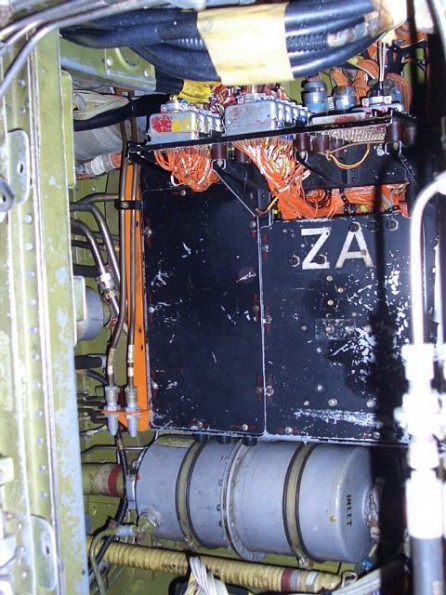 Still in the nose gear bay, now looking upwards. Avionics equipment is accessible from here and have a rather worn appearance, suggesting frequent poking with screwdrivers. 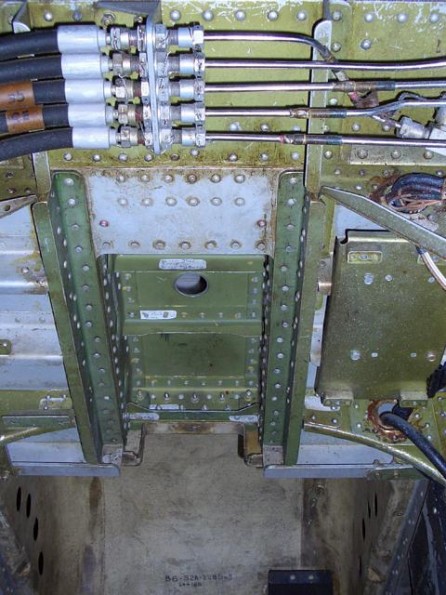 Completing the turn, now looking towards the tail of the aircraft. Still a bit of tubing and stuff, but the actual nose wheel bay seems empty enough, though a bit grubby. Note the hydraulics at the top of the picture. 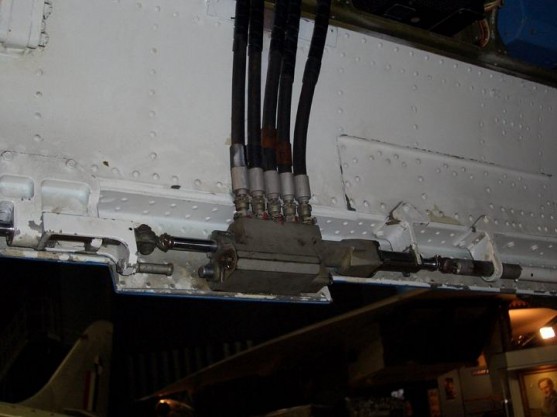 This is where those five hydraulic pipes lead: the starboard side rear nose gear cover. They presumably drive the locking mechanism. These rear covers were normally closed except during actual retraction/extension. 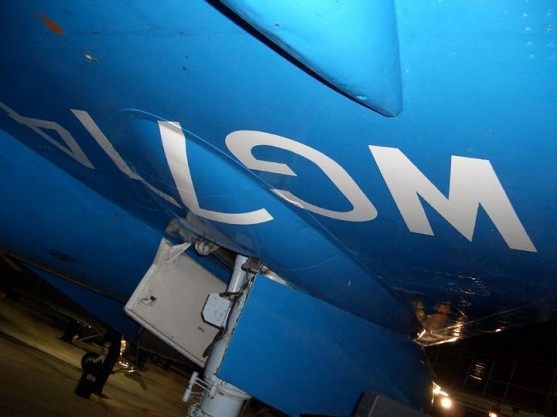 Moving on to the main gear. This view of the starboard main landing gear is from three-quarters behind. Note that the ”WG774” serial is not repeated on the port wing, nor on the wing top surface. It is however painted on both sides of the rear fuselage. 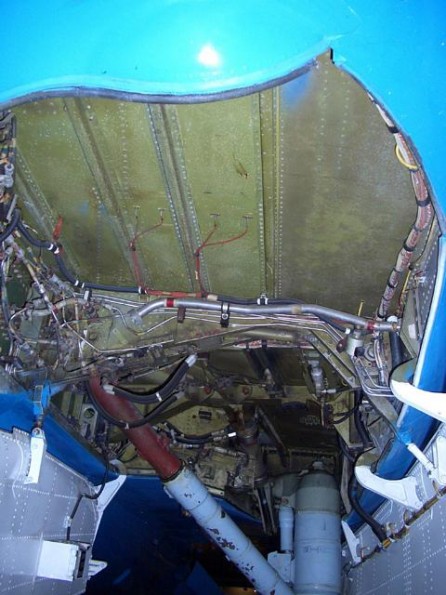 Inside the port main gear well, looking towards the tail of the aircraft. Note here too how the area where the wheel ends up is kept clean of plumbing. 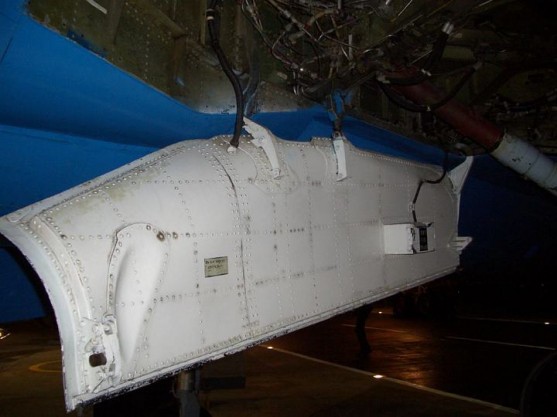 The port side inner gear well cover. Things to note are the recess in front to fit the wheel and the ”EXT I/C PLUG” box for communication with the ground crew. There has clearly been some overspray inside the well when the aircraft was painted – one wonders whether this was done with the wheels up and the covers weren’t 100% tight. 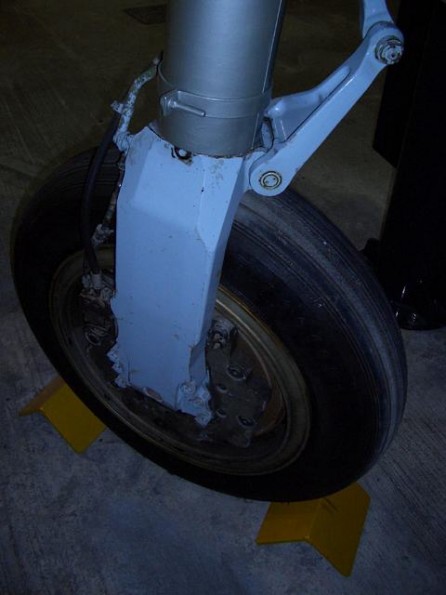 Extremely narrow wheels are necessary for retraction into the thin wings.

There are currently no models of the BAC 221 in production. Maintrack has produced a model in 1/72 scale and Frog produced a 1/72 model of the Fairey Delta 2 in the 1960s. The latter kit has been recently re-released by Maquette. Should one get hold of either, both will require considerable effort to build into something good.