I returned to aircraft modelling a few years ago, having built a lot of Airfix kits in my teens, first without paint and always with some parts inexplicably left over, then with paint and mostly complete, but most of them ending by firecrackers in their fuselages or (air-)gunfire on a friend´s attic. Now, I´m building quite a few as far as my time allows in a more thorough way and I´m trying to improve – who doesn´t? One of my attempts is this Nakajima Ki-84 Hayate (Frank). 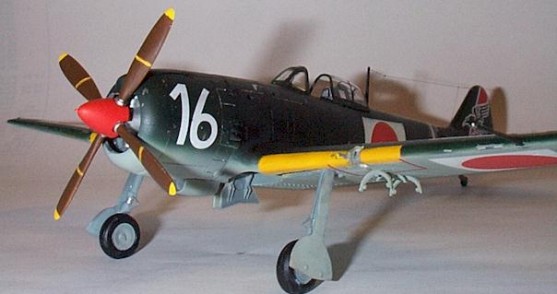 Appearing relatively late in the War, the Ki-84 was one of more prevalent IJAAF planes in the air from 1944 onward. It design specifications were in response to the need for a fast, armored and heavily armed fighter which could compete with Allied fighters on equal terms. The plane was extremely fast, it could outstrip even the Mustang at low altitudes. It was well armed, plus it incorporated more protection for the pilot and vital components than any earlier Japanese design. The plane retained much of the excellent manoeuvrability seen in almost all Japanese fighters throughout the war.

In theory the Ki-84 was one of the most impressive designs of World War II. However by the time the Hayate made its appearance the Japanese Aircraft Industry was beginning to show the strain. The Ki-84, along with many other planes produced by Japan in the late war years, had glaring production problems. The engines, which ranged from about 1800-1990hp depending on type, were plagued with problems due to declining production standards. The planes landing gear assembly was weak, resulting in many planes being ”written off” after the landing gear collapsed on landing. The Ki-84 undoubtedly suffered from a low ”service availability” rate.

However when the Ki-84 actually made it into the air it proved a formidable antagonist to Allied Fighters, quickly gaining the respect of its opponents.

The overall fit was good, I just had to do some filling at the wing roots. The brass parts improve the cockpit quite a lot, especially since Tamiya decided to mould the control panel split, each half moulded integrally in the respective fuselage half. That calls for something to put in front of it. The Eduard panel with the slide film glued behind it and painted white from its back (so that you can see the dials) looks quite convincing to me.

Apart from that, I built the kit from the box, just thinning out some parts, especially the wheel covers.

Prior to painting, I brushed Gunze Sangyo´s Mr.Metal silver paint on strategic parts of the plane and airbrushed the panel lines black. 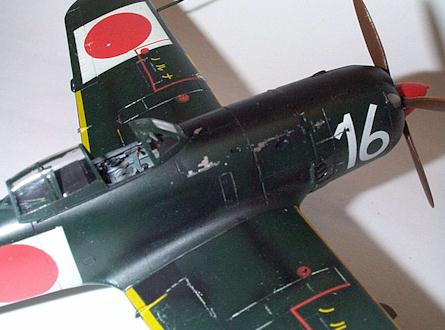 After having sprayed the plane in its actual colors and giving it a gloss coat (a must with AeroMaster), I applied the decals. The AeroMaster sheet has some nice late-war schemes, all in IJAAF dark green, but with colorful geometric markings. As always, I used MicroSol to let the decals work their way into the surface.

After spraying a matt coat and drying, I worked with an X-acto knife, toothpicks, sticky tape and the like to produce ”worn-off-paint-areas”. I have found no better way so far to achieve this worn-off look.

Finally, the antenna was done from very thin stretched sprue, tightened with a heated instrument held close to it. I put some drops of superglue at the ends representing the tightening devices/isolators and carefully painted it silver metal.

Building mostly in a just-for-fun way, I can´t say anything about the dimensional accuracy of the kit, but to me, it captures the Frank´s looks as I know them from pictures. I had fun building it anyway.