by Martin Waligorski
Photos courtesy of US Navy, Library of Congress, US Air Force

This is the third and last part in the reference series about interior finishes of US-produced aircraft of the World War II era. Please refer to part one for general information on the development and the variety of finishes used. Part two covered interiour finishes of the US Army Air Corps / Air Force aircraft. This part three is devoted to Navy aircraft types. – Ed. 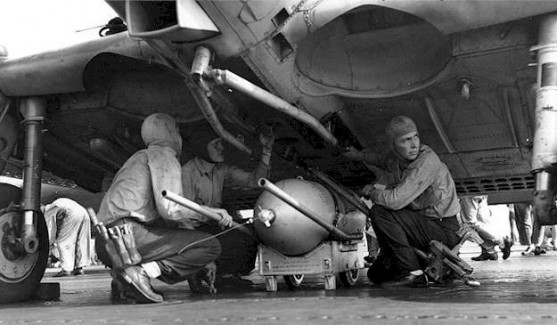 Mating a bomb to an SBD onboard USS Enterprise during the Guadalcanal Invasion, August 1942. The usual Navy practice of painting the wheel wells in the same colour as the underside of the airplane is well evident on this picture. What is really interesting about this photo is the undercarriage itself, the left and right legs being painted in two very different colours. The starboard (dark) one is apparently a spare.

In the first (Interior Colours of US Aircraft, 1941-45 – Part I) and second (Interior Colours of US Aircraft, 1941-45 – Part II) parts of this feature we have discussed the protective finishes used in US aircraft production of the immediate pre-war and World War II period, and the evolution of colour shades and specifications used in that production.

In this installment we will go more specifically into interiour finishes of selected US Navy aircraft, using a few popular aircraft types as examples.

Please note tha most of the quoted colour names (such as Grumman Grey or Salmon) have been described in the first part of the series.

In the immediate pre-war period, many Navy aircraft, e.g. F2A, F4F, SBD, TBD show silver cockpits in photos, most probably Aluminium lacquer. Sometimes, silver cockpits were carried over to the initial weeks of the conflict.

Later US Navy aircraft of the World War II had the interiors painted in Interior Green. Interior Green was initially a Navy colour and when the ANA series of paints was adopted in 1943 the colour agreed upon for tinted zinc chromate was Interior Green.

Also in general, naval aircraft of the period had their undercarriage and wheel bays painted the same colour as the bottom of the aircraft.

In the later part of 1944, the Navy issued modified paint specifications for cockpit interiors. The new specification called out for instrument panels to be painted black together with all side consoles and sidewall surfaces above the bottom edge of the instrument panel. Cockpit surfaces below that line were to the painted Interior Green.

On the other hand, Interior Green was almost never used for the inside of engine cowlings of WW2 Navy aircraft. The most popular shades in this area are believed to be Non-Specular Light Grey or Black. However, Interior Green was standardised upon after the war.

Like with all regulations and practices you can expect to find exceptions.

The British Model 339 manual doesn’t specify the colours, but other evidence suggests the colour was matching the British Interior Green. 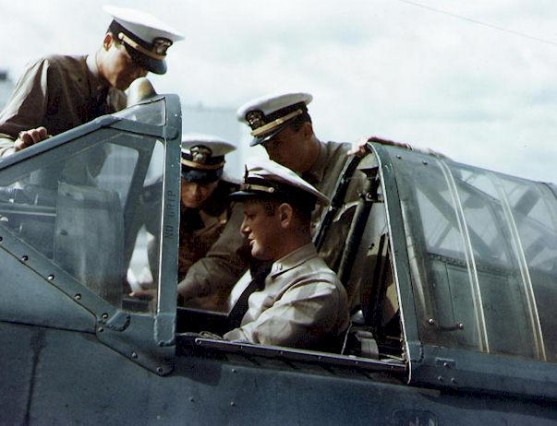 Close view of a cockpit of an unidentified Brewster Buffalo at Naval Air Station, Miami, Florida in April 1943. This F2A was used as a training aircraft. The photo shows Zinc Chromate Green details behind the pilots’s head. Interestingly, the rollover cage beneath the rear canopy is painted in some other colour. The instrument panel decking below the windscreen is matt black.

Curtiss has reportedly used its own Curtiss Cockpit Green shade, being a variant of Zinc Chromate Green.

While some sources state that this was just their trade name for the standard Interior Green, ANA 611, others suggest that it was, in fact, a different colour, being lighter and more brown in shade.

The bomb bay, gear wells and landing gear struts were all Interior Green, even on late-production Helldivers, differing from the usual Navy practice of having wheel wells and doors follow the underside colour.

Early production yellow-wing F4Fs are believed to be painted Aluminium lacquer on all internal surfaces including that of the cockpit.

According to factory Erection & Maintenance Instructions, cockpit interiors of F4F-3 to F4F-4s were painted in Bronze Green. Later F4F-4’s may have been painted Interior Green. Some sources attribute Bronze Green for Grumman built Wildcats and Interior Green for Eastern built ones.

An interesting thing is that Tom Cheek, the famous pilot of the VF-42 at USS Yorktown at the time of the Battle of Midway reportedly said that he had his cockpit painted red to keep him alert!

It would appear that other internal areas of the Wildcat – fuselage interior, inside of the engine cowling, the area beneath the cockpit floor and main undercarriage bay were painted in a light grey shade called Grumman Grey. 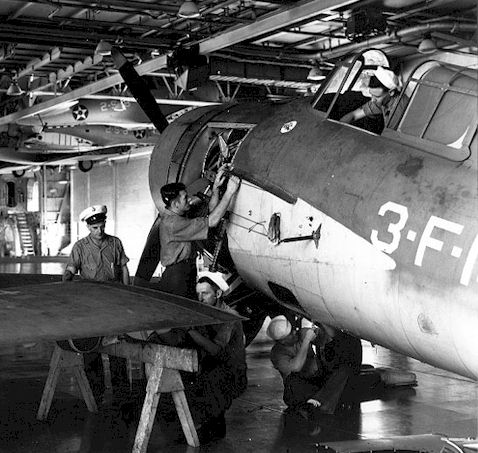 Evidence of a light ”Grumman Grey” primer being used on early Wildcats. This F4F-3 has been photographed in the hangar of USS Enterprise on 28 October 1941.

The landing gear struts of the Wildcat were Grumman Grey with black in the lower portions protruding beyond the fuselage. This is true for aircraft right out the factory, but it was not uncommon that these were repainted in the same colour as the adjacent camouflage colour – either light grey for two tone camouflage Wildcats or Insignia White for three-tone schemes.

The depressions for the wheels in the fuselage as well as the wheels were painted at the factory in the adjacent camouflage colour. 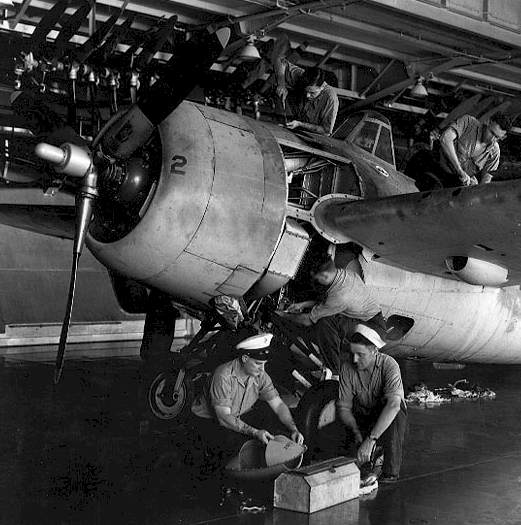 General Motors-produced FM-1 and FM-2s had a standardised interior finish of Interior Green from the inside of the cowling all the way back, including the undercarriage struts.

By the time Hellcat entered mass production, Grumman had made the decision to adopt Interior Green in place of Bronze Green for cockpits, and possibly also to adopt Zinc Chromate primer in place of its own Grumman Grey. However, older paints were to be used as long as their stocks were available. 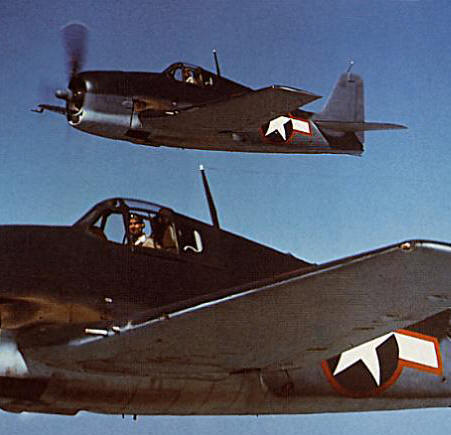 An enlarged portion of a well-known photo of newly produced F6F-3s on Grumman publicity flight. The factory-applied red surrounds to the national insignia should indicate a June – September 1943 time frame. What is interesting is the colour of the headrest inside the cockpit, which looks markedly unlike Interior Green. The actual colour could have been Bronze Green, but this statement is non-conclusive.

In common with the general Navy practice the wheel bays and undercarriage legs were finished in the lower surface colour. However, the area ahead of the main spar in the wheel well was left in Interior Green. Also, some photos of operational Hellcats show wheel hubs and legs in Aluminium finish, possibly applied during overhauls at field maintenance depots. 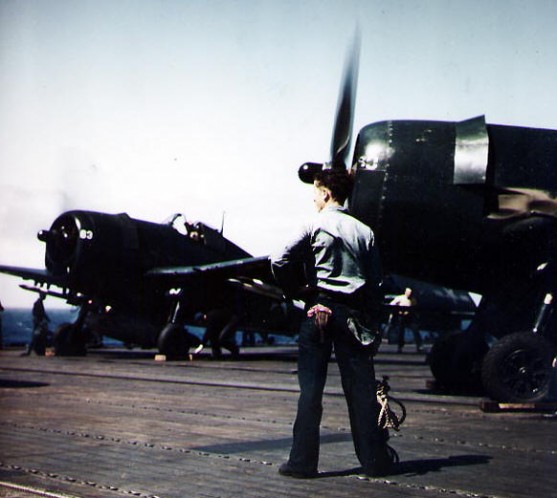 Late-war production F6F-5 show the overall Glossy Sea Blue colour being carried over to undercarriage legs, boths sides of covers and wheel hubs. The wheel well interiors were also painted this way. The phot has been taken aboard USS Bennington, ca. May 1945.

According to the late-war standards, F7Fs had their cockpits painted Interior Green, with the upper areas above the consoles painted flat black. All other internal areas including the rear cockpit – where present – were Zinc Chromate Yellow with black upper areas.

Interior Green was also used for the remaining internal surfaces of the airframe including wheel wells. Undercarriage legs, wheels and covers were painted Glossy Sea Blue to match the underside of the aircraft.

In keeping with the by-then standard Grumman practice, wheel wells of the F8F were Glossy Sea Blue, together with undercarriage legs and covers. The cockpit was Interior Green up to the lower edge of the instrument panel, with flat black above that line. The seat was black.

Inside of the cowling was Interior Green or possibly flat black.

In earlier production models TBF-1 and TBF-1C, the crew compartment was finished in two colours – Bronze Green forward from the bulkhead in front of the turret with Interior Green for the rear crew areas. Grumman Grey was used inside the cowling.

In a later set of Erection & Maintenance manuals, Dull Dark Green replaced the Bronze Green in the cockpit.

The TBM-1C and TBM-3 series aircraft built by the Eastern Aircraft Division of General Motors had everything from the inside of the cowling all the way back painted Interior Green.

In common with the general Navy practice the wheel bays, undercarriage legs, wheel hubs, landing flap bays, etc. were all finished in the lower surface colour throughout the Avenger production.

Sorting out the interior colours of the Corsair is particularly tricky. For the F4U-1 Birdcage Corsairs, photos taken at the time show the cockpits being a very dark colour, most probably black. Analysis of some crashed examples of F4U-1s indicates black, while the factory Erection & Maintenance Instructions called for Dull Dark Green.

As mentioned before, early production Corsairs had their interior surfaces in areas other than the cockpit covered with Salmon primer. This colour mixture was used relatively long into Corsair production. It would seem that all F4U-1s and a number of early F4U-1As were finished this way.

Somewhere during the production of F4U-1A model Vought discontinued the use of Salmon primers and switched to Zinc Chromate Yellow with cockpits in Interior Green.

In the engine cowling area, Vought adhered to the practice of painting its inner surface the same colour as the underside, ANA 602 Sky Gray on early F4U-1s, ANA 601 Insignia White on F4U-1As.

The wheel wells of early model Corsairs deserve closer inspection. Like the cowlings, the main wheel wells, undercarriage legs and boths ides of well covers were painted in the underside camouflage colour, ANA 602 Non-specular Sky Gray. Wheel hubs were silver. However, the smaller forward area of the wheel to which the leg itself retracted was left in the factory primer finish, Salmon. Some aircraft had also Salmon inner surfaces of the small covers attached to the undercarriage legs.

The canvas covers in the wells were probably drab -coloured.

With the advent of the tri-colour camouflage on F4U-1A the same principle was applied with white replacing the Sky Gray with ANA 601 Non-specular Insignia White, and the However, the undercarriage legs remained grey throughout the production of this model, possibly due to the failure or indifference to notify a subcontractor about changed colour specifications. For the record, some photos of -1As seem to show silver undercarriage legs, but it could not be established to what extent such finish was applied. One theory is that Aluminium lacquer was applied on these assemblies during field depot overhauls.

In October 1944 the new factory instructions for the F4U production called for application of Interior Green on all internal surfaces including the cockpit. As an anti-glare measure, all cockpit panels above the lower edge of the instrument panel were to be painted matt black. Curiously, the new directive did not explicitly state what was to happen with the cowling’s inner surface. Thus, subsequent machines showed either Zinc Chromate or Interior Green cowlings, until the last standardisation of colour post-war whereupon black was introduced in this area.

During that period, the wheel wells were also painted Interior Green. Undercarriage legs were initially still finished in light grey, but as existing stocks of parts were used up at the factory, the overall Glossy Sea Blue finish was carried over to the undercarriage legs and wheel hubs.

In production from mid-1939 to1944, the SBD was another long-runner in the US Navy inventory. Not much appears to be known for certain about its interior finishes. Some sources state the SBD-1s most probably had Aluminium lacquer interiors, while others claim some Mixed Green/Interior Green with Zinc Chromate for the remaining airframe. Camouflaged mid-production SBD-2 through SBD-5 series almost certainly had Interior Green cockpits.

In common with the general Navy practice the wheel bays, undercarriage legs and wheel hubs were finished in the lower surface colour.

The dive flap bays and inner surfaces were painted Insignia Red, giving the effect of high contrast indicator when the flaps were deployed. However, the centre dive flap and its bay interior was finished in Aluminium lacquer.

This article was originally published in IPMS Stockholm Magazine in May 2004.