The Mig-19 (NATO code Farmer) was the first mass-produced supersonic fighter of the Soviet Air Force. The prototype first flew in 1953, the aircraft entering production in 1955. Farmer was the primary fighter of the Russian air force during late fifties to the early sixties, about 2500 aircraft being produced in total.

Although it proved to be a capable and sturdy combat aircraft – and a competent dogfighter, it appears now to be mostly remembered as an interim step between the Mig-15/17 first generation jets and the incredibly successful Mig-21 Fishbed. In its configuration, it is a direct descendant of Mig-15 with fixed engine air intakes in the blunt nose and swept wings – although the sweep has been increased to 55 degrees.

The presented MiG-19S was photographed by me in 1995 at Technical Museum in Brno, Czech Republic. The MiG-19S (Farmer C) was a basic fighter-bomber version without all-weather capability.

I’d like to thank Mr. Brinek from the museum who allowed me to take the pictures. Unfortunately he didn’t have a crank for manual canopy opening, so pictures of the cockpit interior couldn’t be taken.

In retrospective, the quality of some photos is far from excellent, but since there are not so many Mig-19 pictures on net so far, I hope that you will find them useful.

The entire airframe has suffered from many years of exposure to the elements in the open. The sorry effects show – especially for the steel components, which rust heavily. As for the paint finish, I believe it to be original, although both the natural metal and painted surfaces are heavily worn with large amounts of paint flaking off.

There are 22 pictures in all, divided in two sections: 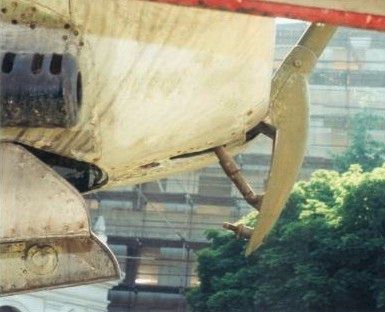 Apologies for the lack of initial overall view of the aircraft, but at the time of the photo session I was interested exclusively in details! So we jump straight into close-ups: this is lower part of the very nose of the aircraft with the tip of the 30mm cannon barrel visible to the right. The nose probe is tilted up on its swiveling mount, possibly a feature to prevent damage to the probe during ground handling. 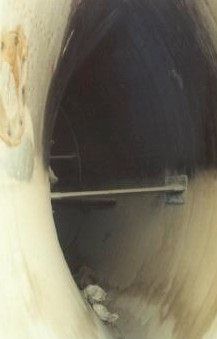 The nose intake configuration of Mig-19 followed the tried but simple fixed-flow solution of Mig-15/17 series with the massive split-plate inside the blunt nose. A peek into the port nose intake reveals some streamlined bracing inside. 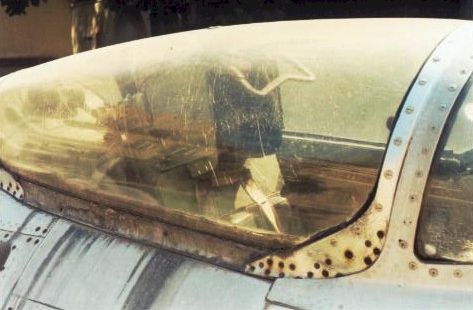 I managed to climb up on the wing to take this picture of the canopy. Note the tight fit of its moveable part. The ejection seat is barely visible inside. 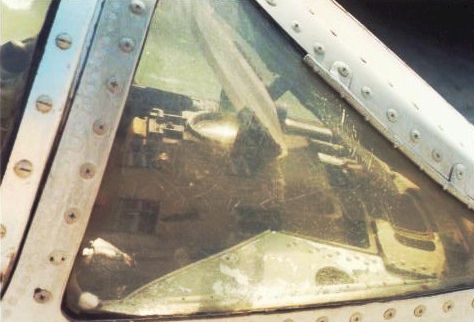 No, this is not an early version of head-up display, but rather a classic reflector gunsight.
The Mig-19 was primarily designed as a dogfighter!

An interesting technology detail is the curious mixture of Philips-type and traditional screws used in the airframe construction, as visible on the canopy rim. 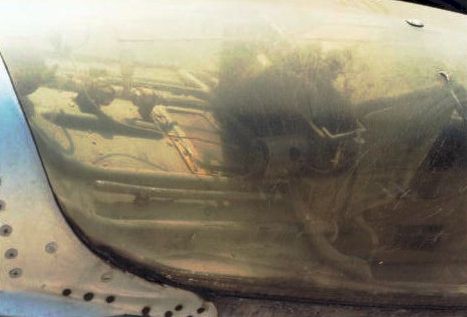 Not a best quality photo, this one shows detail of the rear cockpit decking behind the pilot’s seat. 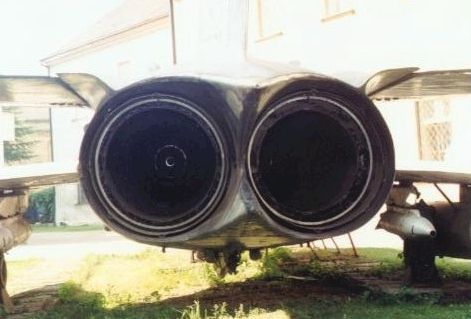 Contrary to the usual Soviet preference of single-engine configuration for fighter aircraft, the Mig-19 needed two engines to achieve the performance requirements. These were the Tumansky RD-9 turbojets, each with 3040 kg of thrust. 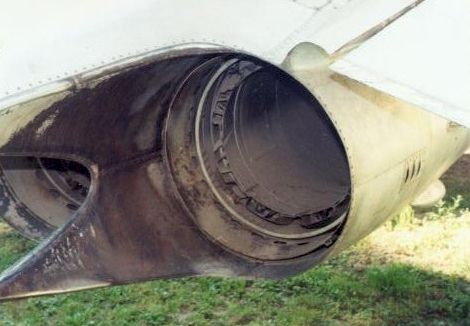 Engine exhaust pipes were separated with the characteristic curved ”double” tail (to the left of the photo) – a distinctive feature of Mig-19. 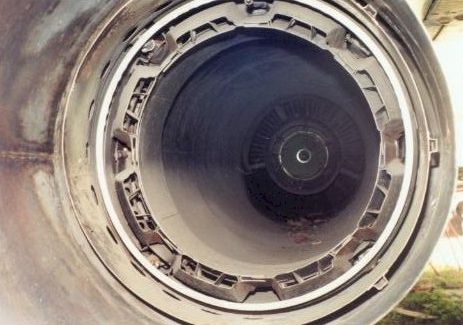 A look into exhaust pipe of the starboard engine 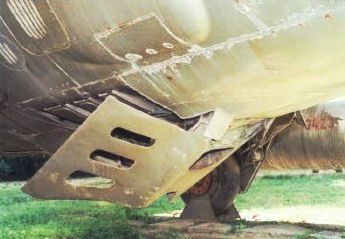 Perforated ventral air brake in half-open position – this due to lack of hydraulic pressure in the preserved aircraft. 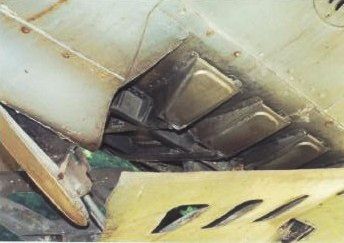 ..and its complex internal detail. As can be seen the pressed metal formers on the inside provided for the smooth outer skin surface with brake in the closed position. 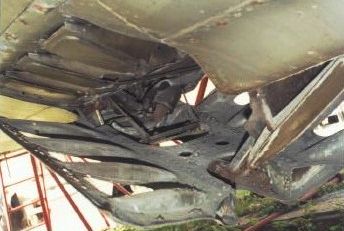 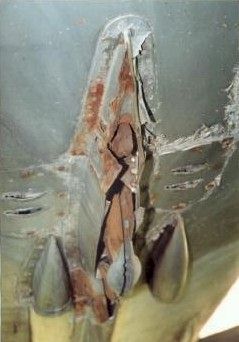 This strange shape is a tail parachute attachment point. 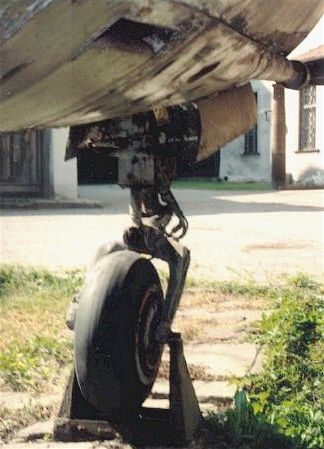 Front undercarriage leg with the cannon protruding from the lower starboard fuselage. Note shell ejector chute in the foreground.

The sorry state of the airframe is especially visible on its lower parts. 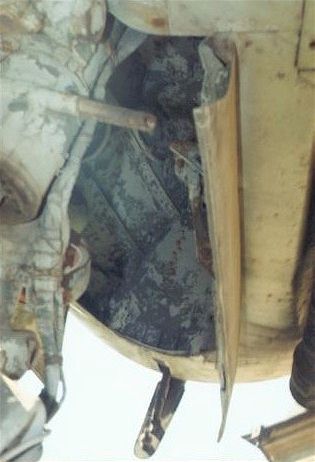 A look into the front wheel well shows a very worn painted surface.There are two shades of grey, but I don’t know which was the primer and which was the top color here. 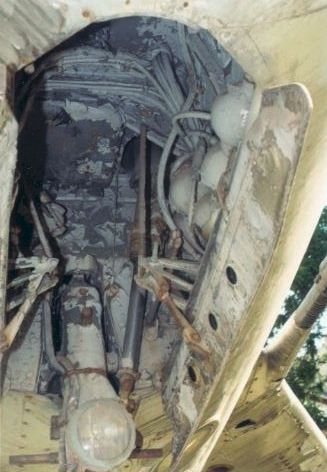 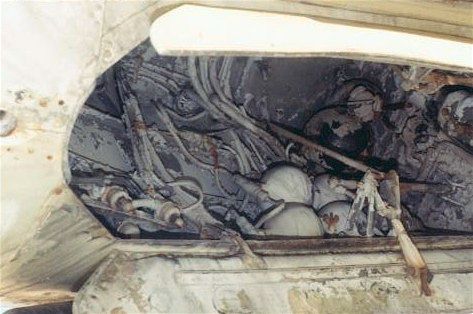 I think that the spherical objects visible here are oxygen bottles… 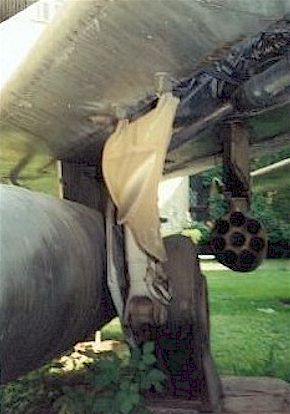 Starboard main undercarriage seen directly from the front. On the armament pylon there is an rocket launcher for unguided ground-attack missiles. The outer pylon carries extra fuel tank (note how close the undercarriage cover comes to it). The ”hanging” sheet in the front is in fact a third undercarriage cover, bent and deformed on this aircraft. 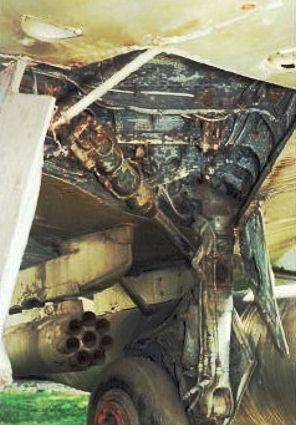 A better view of the opposite undercarriage leg. 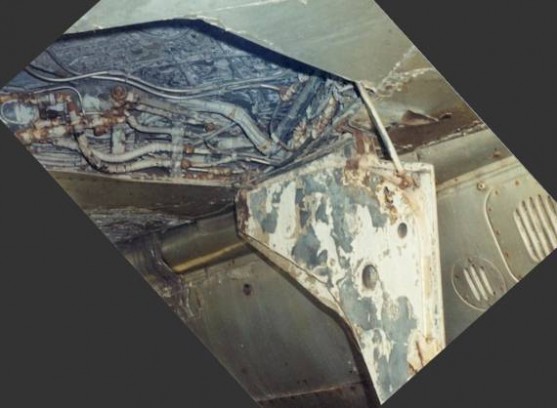 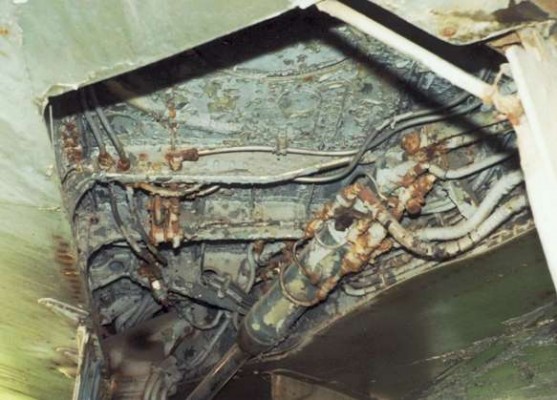 Details of the hydraulic plumbing. Starboard side, looking aft. 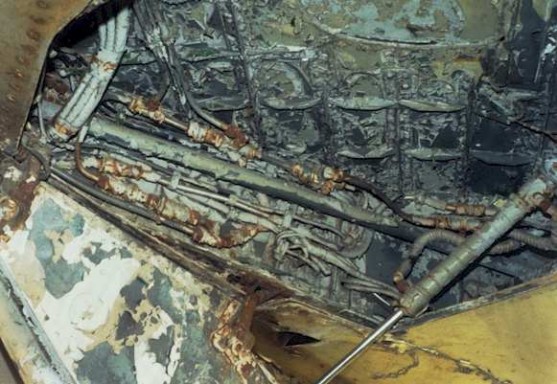 Inner sidewall detail side of the starboard wheel well, looking towards the centerline (aircraft’s nose is to the right on this photo) 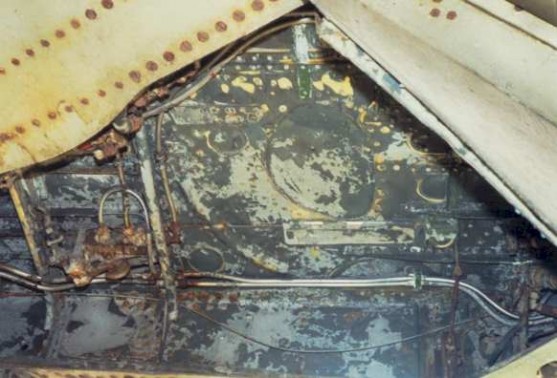