Hoppa till innehåll
Hem » Artiklar » Can it be Easier than This?

This article has been first published at www.hyperscale.com. Reproduced here with author’s permission.

Following the end of the war, blueprints for many advanced German aircraft designs ended

up in Russia where they were thoroughly examined and evaluated. One of the most promising designs was the Focke-Wulf Ta 183 jet fighter. Featuring a 40 degree swept wing and high T-tail, with an estimated max speed of Mach 0.9 and a service ceiling over 10,000 meters it no doubt would have been a formidable fighter had it entered service.

The Russians completed six Ta 183 prototypes and the first flight was on July 2, 1947. Some unpleasant low-speed flying characteristics were discovered, calling for a few design changes. The new refined prototype, designated S-01, then flew for the first time on December 30, 1947. It was powered by a RD-45F turbojet engine with centrifugal compressor, this engine being a copy of the British Rolls-Royce Nene supplied to the Russians just after the war. Despite this rather primitive engine the prototype was capable of achieving Mach 0.9 in level flight and Mach 0.92 in a dive. This proved the soundness of the design & in May ’48 the aircraft entered production as the MiG-15.

Shortly afterwards a few more problems were encountered and this led to the improved version, the MiG-15bis, entering service. Amongst other things this latter featured an improved VK-1 engine with enlarged combustion chambers, turbine blades and tailpipe to handle a greater flow of air, raising static thrust and improving reliability. Hydraulic ailerons and ”revolver” type auto-cannons with greater ammunition capacity were also fitted. Although the three auto-cannons had a rather slow rate of fire their large-caliber ammunition made them deadly, especially against four-engined bombers. The autocannons were mounted on a separate platform under the nose; this platform was attached by four steel cables and could be manually lowered, thereby greatly simplifying routine maintenance and allowing for rapid rearming. 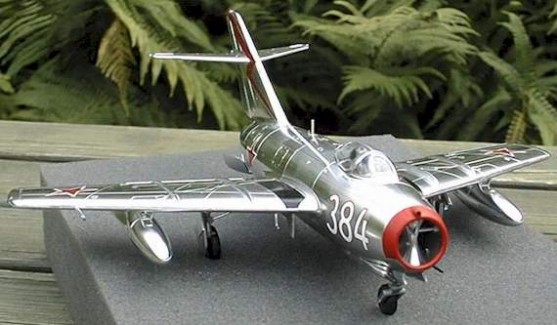 During the Korean War the MiG-15 was used extensively and on November 8, 1950, 1st Lt. Russell Brown, flying a F-80 shot down a MiG-15 in the first all-jet dogfight in history.

Despite the good performance of the ’Fagot’ (as the MiG-15 was designated by NATO) many aircraft were lost due to the professional and more aggressive flight behavior of the US pilots.

About 16,000 MiG-15s of all types have been built in the former Soviet Union, Poland, former Czechoslovakia and under license in China. Nearly 40 countries used this sturdy aircraft and according to some sources some examples might actually still be in (limited) use.

This kit is actually a re-release of the original Tamiya MiG-15 model (it is numbered 89535, the old one is numbered 61043). The difference is that the plastic parts of this kit are silver/chrome plated, so in a way you could say that the kit itself is bis, i.e. improved!

You get a total of two main chromed sprues (each packed in its own protective plastic bag; it is a good idea to keep the sprues in these bags until you will use them since it is quite easy to scratch the rather delicate chromed surface), a small clear sprue, a cylindrical metal nose weight and an impressive decal sheet. The decals are about the thinnest I have seen but they never the less have a very high color density. Unfortunately they tear rather easily if you mess around with them too much after removing them from the backing sheet; try to get the decal in the right spot at once and all will be fine, though. Decals for a total of four different aircraft are supplied. In fact, the contents of this kit is identical to the older one (no.61043) save for a small sheet explaining how to cement and maintain/repair the chrome plated parts.

When I bought this model I had actually planned on building it as a camouflaged Chinese aircraft (I was unaware of the chrome plating of the kit at that time), but that would really have been a total waste of the chrome plated parts. Besides it could be fun to build a model straight from-the-box, so… what else to do but complete the model as a highly polished air show jet in mint condition? 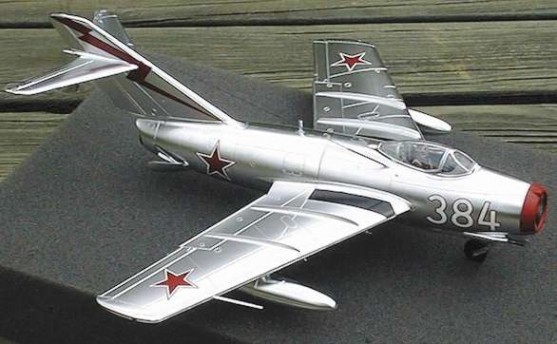 As usual I began with the cockpit. This is actually not very good, at least not when considering the quality of the rest of the kit. Both the integrated side consoles and the ejection seat lack detail and the main instrument panel look a bit over-simplified. Fortunately the pilot figure is quite well done; if you choose to have him seated and keep the canopy closed the lack of detail in the cockpit won’t be that obvious. Otherwise you really should use an aftermarket set or be prepared for some serious scratchbuilding.

After the cockpit was completed the forward fuselage halves were cemented together, trapping the cockpit and the air intake splitter in between. At this point I painted the rear inner parts of the forward fuselage flat black; this was to limit visual access through the front air intake (the silver chroming make the model very easily ”lit up” on the inside). To prevent the nose weight from moving around I cemented it in place and then the gun platform was inserted. Note that there should be a rather prominent panel line around this platform; on the real aircraft it could be manually lowered by four cables for easy maintenance and quick reloading of the guns. The rear part of the front fuselage is sealed off with a firewall where the engine is to be mounted. Even if you plan on leaving the engine off (as I did) it is a good idea to cement this firewall in place since it helps aligning/supporting the wings and the rear fuselage part later. The gun barrels were left off for now.

Worth noting is the extremely good fit of parts; I didn’t have to use putty anywhere and for the most part this ”bird” almost went together on its own! Actually, considering the chrome plating of the parts, this is more important than ever since it is near to impossible to make a puttied/smoothed join disappear. Very small areas (as the cut-off sprue connectors) can be just silver painted, but if you have to repair larger areas the best way might be to cover the entire airframe panel surrounding the damaged spot with metal foil.

The wings were completed and then attached to the forward fuselage part. Before cementing the wings be sure to check that you have opened the correct holes for the drop tanks to be used. Two type of tanks are supplied, the older 800 liter ”slipper” tanks and the larger conventional 1140 liter underwing tanks which I used. Note that these tanks require three mounting holes to be opened. The flaps can be cemented in the down position which is what I did. Be careful so they don’t interfere with the tail of the underwing drop tanks; I ran into some troubles here but it was most probably not a fault of the kit, more likely a consequence of me not paying attention earlier, only opening two of the required three mounting holes for the tanks and thereby upsetting the aligning. The undercarriage goes together easily but look rather complicated when completed. All wheels were sanded down on the underside in order to get a ”weighted” look.

The rear fuselage is a very simple affair consisting of no more than eight parts, including the tailplanes and the positionable air brakes. If the air brakes are closed they will almost ”disappear” into the fuselage, fit is really that good! I chose to have them extended, though. The kit also includes a complete Klimov VK-1A turbojet engine, this is meant to be cemented to the front fuselage firewall and then the rear fuselage can be slid over it. If you wish to display the model with the rear section removed it can be placed on a simple wheeled dolly stand. Since I wanted to display the engine separately I had to build a new exhaust nozzle extending slightly from the rear fuselage. This was made from a piece of plastic tubing sanded into shape and attached by plastic bars inside the rear fuselage.

The kit supplied engine is almost a little model in itself. The VK-1 turbojet

of the MiG-15 was a development of the original RD-45F turbojet which in itself was a copy of the British Rolls-Royce Nene. Featuring a centrifugal compressor and separate combustion chambers this rather primitive jet engine was not very well suited for high-speed flying but at the time it was the best engine available. Tamiya’s engine look dimensionally correct but it only has eight combustion chambers while I believe the real VK-1 had nine. This nitpick aside it certainly is a nice looking item; I fixed it up with some general wiring and plumbing and then mounted it on the dolly stand.

Finally the front and rear fuselage halves were mated, fit is very good and even if you choose not to cement the halves together (in order to be able to remove the rear fuselage to show the engine) they will be rather firmly held together by the rear part of the wings. All remaining details were then added (guns, lenses, antenna, pitot tube and canopy). The canopy is working just like the real thing and if not cemented it can be slid back into the open position.

Because of the chrome plated parts painting was kept to a minimum. The cockpit, landing gear bays and the inside of the air brakes were painted in a light blue-grey colour; according to my references the inside of most MiG-15s are painted in different shades of light grey and/or blue. I used Humbrol 140 which I thought was a fair match. The instruments in the cockpit were painted black and some levers and knobs were picked out in silver. The pilot figure was painted according to Tamiya’s instructions. The nose ring around the air intake was finished in red while the gun blast panel on the underside and the landing gear received a coat of metallic steel grey. The guns, engine exhaust nozzle, wheel hubs and the inside of the flaps were painted flat black and then heavily brushed with grafite powder to give them a metallic look.

Then it was time for the decals. As mentioned before they are very, very thin; I didn’t use any setting solution or anything but when dry the decals never the less look almost painted on. The only drawback is that they tear rather easily if you move them around to much on the model; I had some trouble especially with the lightning arrows on the fin.

Since I wanted to depict a polished and well maintained aircraft weathering was kept to a minimum; only some very subtle soot streaks behind the shell ejection chutes and around the exhaust nozzle. Afraid of destroying the beautiful gloss surface of the chrome I decided not to seal the model with clear varnish, instead I just left it as it was. The last addition was an aerial made from a piece of very thin stretched sprue. 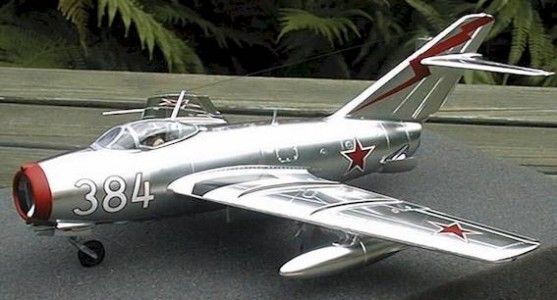 A very easy and fun model to build! The fit of parts of this kit is outstanding and the decals are really great. The silver chrome plating is a nice variation and make for a beautiful all metal appearance of the completed model. The functional canopy and the positionable flaps and air brakes (and of course the complete engine!) make for a lot of possibilities if using the model in a diorama. Detailing and scale accuracy is up to Tamiya’s usual high standards. The only real drawback of the model is the rather poor cockpit, a strange thing since the rest of the model is really great. This can however rather easily be rectified by an aftermarket set or some scratchbuilding.