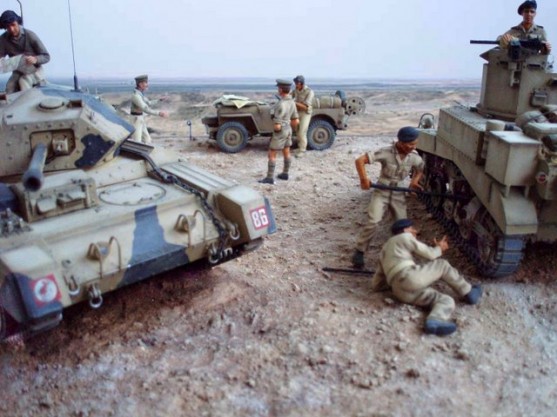 My interest in modelling/collecting 1/35 scale military miniatures has, over the years, included the creation of vignettes and small dioramas depicting the various theatres in which the British Army fought during World War II. I must emphasise the word “small” in relation to my dioramas.

I prefer the small bases of vignettes and dioramas, partly because of storage space limitations but also because I simply find it more enjoyable to create a model in a small area. I like to think of myself as an average modeller; I do not have the talent to be otherwise So I respect and admire all those modellers who have the skills to produce the beautiful models which regularly appear in this webzine.

The Model I believe the title of the diorama is self-explanatory. It is 22nd October 1942, the day before the start of the second battle of El Alamein. A Crusader Mk III of the 4th Armoured Brigade, 7th Armoured Division and a Stuart Mk I of the same Division stand ready, while various crew members carry out last minute checks. Three officers stand between the tanks and discuss tactics while a nearby jeep of the Divisional RAOC has maps spread over the bonnet. A fairly relaxing scene which perhaps hides the tension felt at the thought of the forthcoming battle. 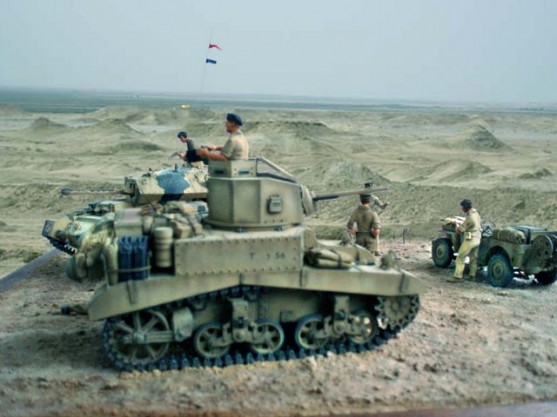 The model of the Crusader is made up from the old Italeri Mk. III kit with a few suitable additions such as equipment and stowage. The Stuart Is made from the Tamiya kit with a Verlinden turret, scratch-built sand-shields from plastic card and some added stowage. The jeep is by Italeri and converted to British configuration. The stowage on the vehicles came from the scrap box or was scratch-built from balsa wood, card and tissue. The maps on the bonnet of the jeep are actual WWII maps scaled down numerous times on a photocopier and given a slight tint with water colours to get rid of the whiteness of the paper; then they were dampened slightly with watered-down white glue, positioned on the bonnet and left to dry in situ. 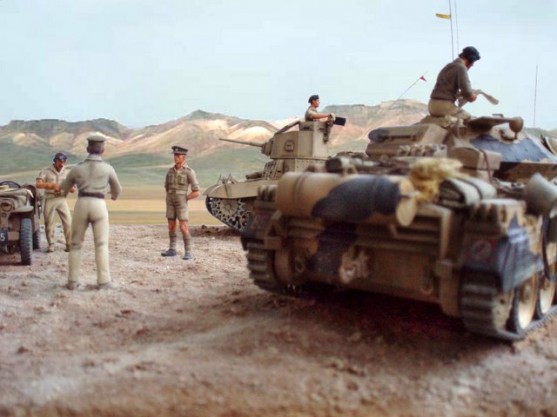 The figures were made from parts of various figures produced by Tamiya, Italeri, Esci, Hornet (heads) and Airfix (Multipose).

Vehicles and figures were brush painted using mainly Humbrol paints together with a little oil paint or water colours as appropriate. Pastels chalks were used for weathering effects. 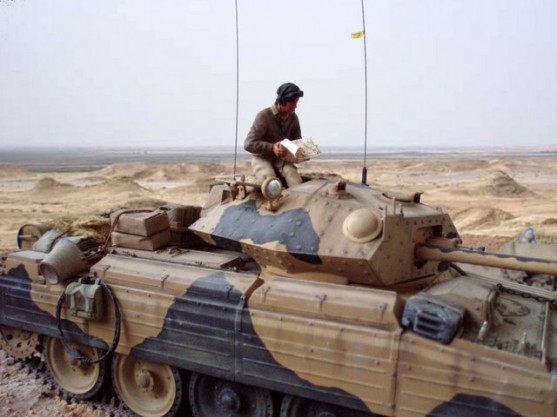 The base was made from a piece of mahogany which was cut to size and polished. Then, after masking off the edges, a mixture of cellulose filler (plaster) with some white glue added for strength was spread over the base to create a roughly flat area and a mixture of fine sand and small stones was sprinkled over while the plaster was still wet. While still fairly soft, this was pressed down with my fingers to enable it to stick as much as possible to the plaster. At the same time, the vehicles and the figures (which had metal pins inserted into the base of their shoes) were pressed down into the plaster to form slight indentations into which they would be glued when the plaster had dried and had been painted. The groundwork was then painted with thinned down Humbrol paints. (It should be pointed out the base was prepared when the figures and the vehicle were only undercoated and had not yet been painted, in order to avoid damaging or staining the paint.) When the groundwork was fully dry, the tanks, jeep and figures were glued into position and an application of powdered pastel chalks was dusted over the lower parts of the vehicles and shoes of the figures and over the ground in order to tie the vehicles, figures and the base together. Finally, a title, made from a brass plate and rub-down letters, was glued to the front edge of the diorama. 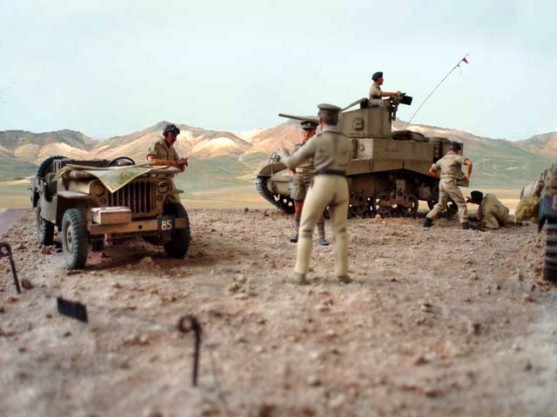 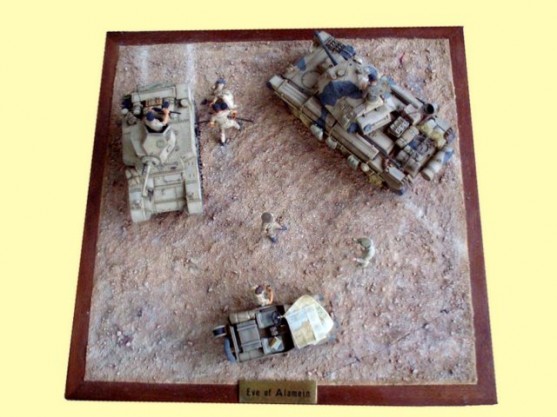