2008 will see my first book released. Coincidentally, it is on nose-turreted versions of the Consolidated B-24 Liberator in USAAF service. In response to the announcement by Hasegawa of their B-24J ’Cocktail Hour’, I thought I should share with you the details of this B-24J obtained through my research. The following information is provided to you as a basis by which you can give the kit a fair and honest review. This information was provided to DragonUSA in early March and was reportedly passed on to Hasegawa so that they could make some corrections to their kit prior to release.

B-24Js differed markedly from one another depending upon who manufactured them. Judging from the above drawing, Hasegawa seems to have combined the characteristics of several different manufacturers and blocks, sadly failing to provide modifications that were done to the basic B-24 based on theatre of operations and the Air Force it flew with.

The following drawings and information are from my forthcoming book, Consolidated Mess: Recognition Guide #1 – The Illustrated Guide to Nose-turreted B-24 Production Variants in USAAF Combat Service. This book will have a great deal of hitherto unpublished information about the B-24 nose-turreted versions gathered from government documents, photos, manuals, and other researchers. “Consolidated Mess” will enable anyone knowing a model, block number and/or serial number to determine what was the external appearance of the aircraft, including type of turrets, etc. 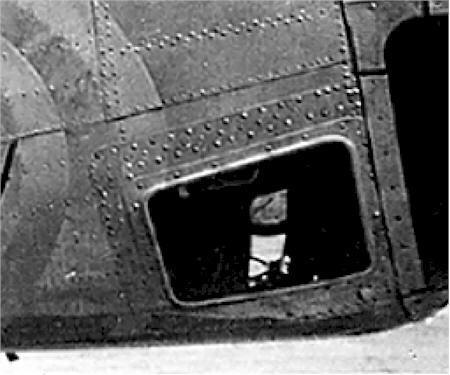 Example of bombardier observation window such as that found on ”Cocktail Hour”. Note the heavy riveting. This window was added post-production at a stateside modification centre. Later, factory-installed observation windows would be flush with the fuselage.

One modification that occurred to nearly every B-24 in the Pacific regardless of Air Force was the replacement of the tail skid with a tail wheel of several different variations.

The modifications specific to the 5th Air Force were:

For detailed photos, drawings and information about all of the above I’d have to direct the reader to my book. In the meantime, the following drawings show Hasegawa’s potential errors and the correct configuration of “Cocktail Hour”. This is also shown in the photo of “Cocktail Hour” at the bottom. 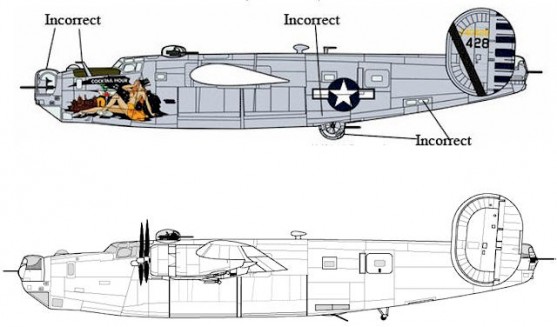 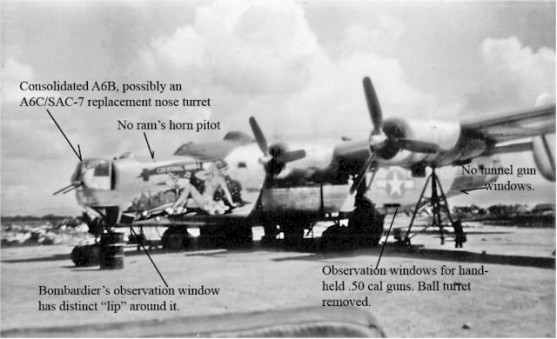