…is the author of this action-packed diorama where German troops of an anti-tank unit are trying to get the Pak 40 gun rolling. Mats entitled it Regroup! Normandy 1944

The visual axis of the composition is formed by the vehicle and the gun, and it is with these models that the project started. 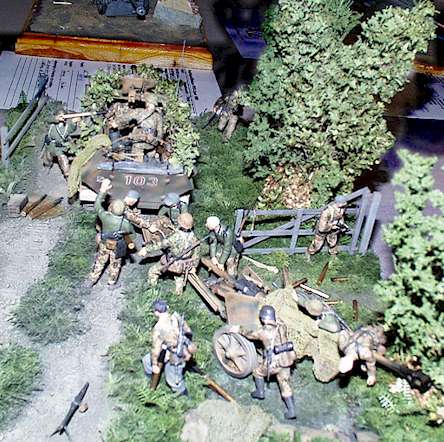 The transporter is an SdKfz 251/10 Ausf. D equipped with a main armament of 2.8 cm sPzB 41. This required a conversion from the Tamiya SdKfz 251/1 kit.. The basic kit was of very good quality, so the required modifications were limited to the change of armament. One of the seats in the fighting compartment was removed to give room for the ammunition. Then the kit’s machine gun was replaced with Dragon’s German 2.8 cm sPzB 41 AT Gun. Extra equipment in the fighting compartment was picked from the spares box. Some ”soft” details like belts, handles etc. have been fabricated from lead foil and copper wire.

The PaK 40 cannon also comes from a Tamiya kit. It has been assembled ”outtadabox”. Both models were then airbrush-painted and weathered accordingly.

Mats built up the base from Oasis (spongy material used as a base for floral compositions). It was easier to cut and form than styrofoam. The low foliage has then been built up from various sorts of fibre, Static Grass and custom-made scale plants. Some plants were photo-etched, some other fashioned from metal foil.

The fences were produced from pieces of scrap wood. The gate’s hinges were fashioned from copper wire. 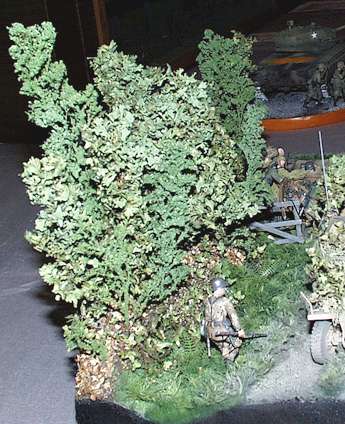 There is a total of fourteen figures in the scene, all of which, with only exception of the vehicle’s driver, were modified. The improved heads came mostly from Warrior, Jaguar and Hornet. So many figures add a lot of life to the scene and allowed Mats to show multiple threads of the same basic story.

The SdKfz 251 has a driver, which is being helped by an officer behind. He lifts his hand, showing the driver to hold on. Attaching the gun to be towed is a teamwork, and a focal point of the scene. Four people are struggling with the PaK’s coupling trying to lift and align it properly. They are assisted by a soldier who jumped on the barrel at the gun’s opposite end, thus creating an effective counterweight. His helmet fell to the ground. Two more are helping to push by the gun’s wheels. 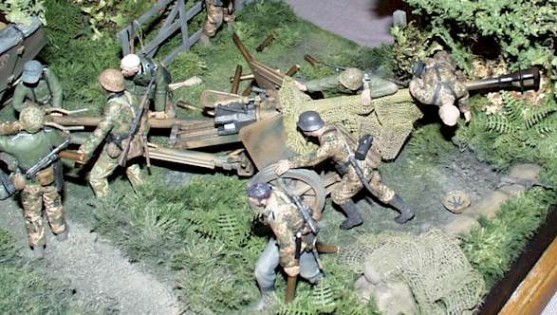 While this is going on, ammunition shells are being hastily packed onto the transporter. A soldier in the fighting compartment of the vehicle receives the ammunition from another one standing on the ground. Yet another soldier carries two more shells collected from the grass.

The whole operation has signs of a hasty withdrawal. Two guards were put

on duty to watch for any incoming threats. One of them holds his post by the gate at the rear. Another one can be seen returning by the bushes behind the SdKfz.

It’s soon time for everybody to go!

Juts to give an impression of a number of kits involved in the project, here´s the list of sources for all soldiers in the diorama: 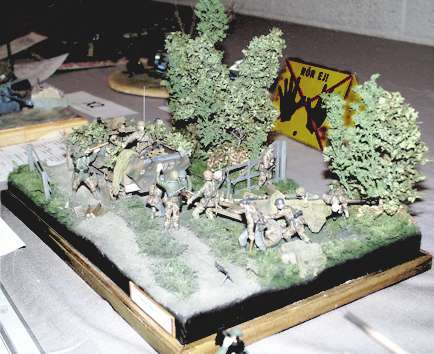 As you can see, this diorama was a major undertaking. The lifelike scenario, careful composition and attention to detail were all equally important components of the project.

The result can be judged from the pictures. I think it is excellent!