JAS 39 Gripen is arguably the most modern lightweight multi-role

aircraft in the world. The Gripen is now operational with the Swedish air force. Flygvapnet has purchased 204 Gripens, to equip 12 squadrons when all aircraft have been delivered.

The anticipations for the new Revell/Italeri kit of the Gripen are high among the Swedish modelling community. No matter how good it will be, the kit will surely better the old Revell 1/32 offering, which has so many faults that it

The story behind the old kit is an interesting one. Moulds were developed at the time when only the prototype JAS 39 was flying. Revell approached SAAB for the drawings of the type. The Swedes deliberately sent fictional drawings to Revell causing the kit to have many faults both in shape and detail. The resulting model -still available – is a sad affair bearing only a slight resemblance of the real thing.

This notwithstanding, in a later press release, SAAB have expressed their concern for the kit being… too close to the classified design! This, of course, must have been only a part of a de-information campaign.

The Gripen is now a common sight on air shows, which allows for much better research work for all interested in scale models. Here’s our contribution.

With a little help…

This article has really been a team work. I’d like to thank SAAB Aerospace and Björn Ringholm for photographs. Also many thanks to Sten Ekedahl, Erik Gutsatvsson, Stefan Eriksson, Dan Kut, Hugis and Niklas Knutzén for research data.

This is our largest walkaround photo collection yet.

A set of over sixty photographs has been divided into sections below.

JAS 39A on public display during a summer Air Show at Bromma airport in Stockholm. Björn Ringholm took the camera and brought back many of the detail shots presented in this feature. Photo: Björn Ringholm 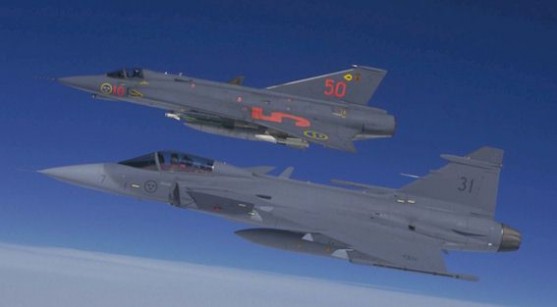 The family resemblance to J 35 Draken is evident on this photo. SAAB Aerospace have kindly permitted us to use their excellent photo collection, and you will see many photographs form this source here. Photo: SAAB

The JAS 39 A weights only 60% of the Viggen while still being able to carry the same amount of ordnance. Still it can take-off within 400 m and land in only 500 m. Photo: SAAB 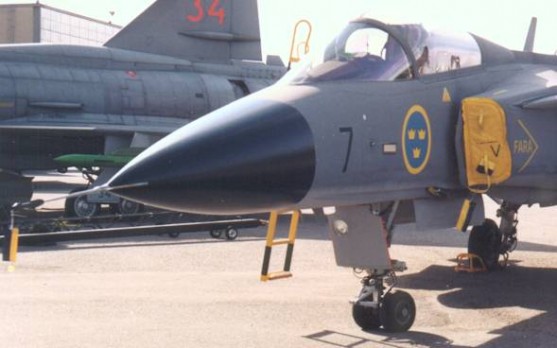 General view of the nose cone and the pitot tube. Photo: Björn Ringholm 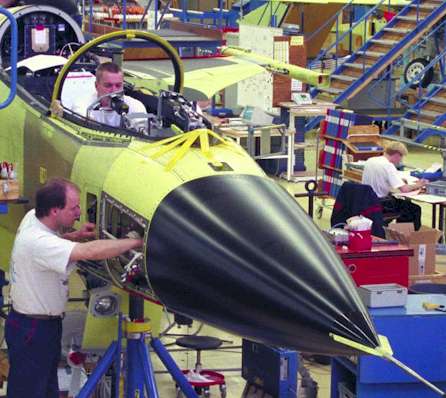 This photo was taken at SAAB’s production facility in Linköping and shows many interesting details. Note the horizontal plate surrounding the very tip of the nose. 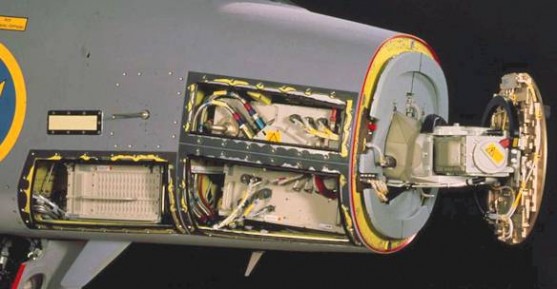 Radar installation for the Gripen is entirely new, developed by Ericsson. Reportedly it is unique by supporting fighter-, attack- and reconnaissance missions in a single unit. Naturally, technical details are difficult to come by, but here’s how it looks! Photo: SAAB

Stencils, Blisters and Other Small Things

This picture offers a good view of the nose detail with prominent colorful stencils. The <FARA mark means Danger as is commonly seen on all jet types of the Swedish Air Force. Note that it is a… decal: you can see the edges of the carrier film! Photo: SAAB 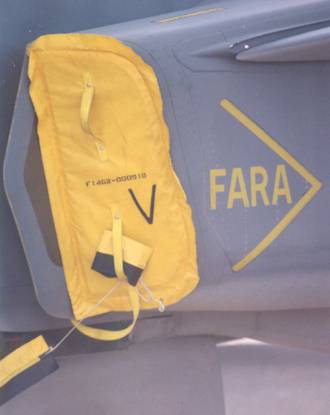 Close-up of the jet intake on the port side with FOD (Foreign Object Damage) cover in place. 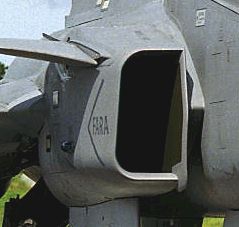 A better view of the intake’s aerodynamic design. Note the <FARA mark in the newer low-visibility form (this one appears to be painted).

The canard wing on parked aircraft can most often be seen just in the position shown – slightly dropped. Check other photos on this page! 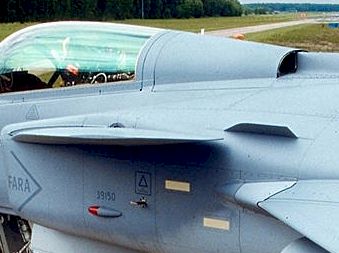 Port side of the front fuselage looks quite busy with the canard wing and several smaller details below, most prominent being formation flying lights in form of white rectangles, and a position light (red on port side, green on starboard).

The twin air outlets behind the cockpit lead out the used air from the cockpit air conditioning and cooling system for electronics.

Note also the bare metal plate at the wing root. 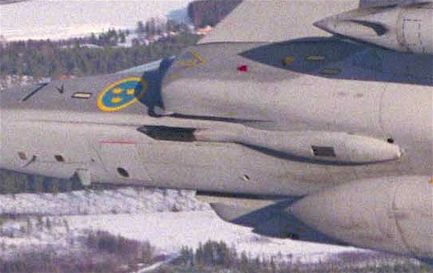 A grainy photograph… nevertheless an important one, as it shows the installation of Mauser BK27 27 mm calibre cannon in a fairing under the port side of the fuselage. The opening in the middle is a spent cartridge chute.

Of other things, the round opening behind the blade antenna is a landing light integrated into the undercarriage cover – more about it later. 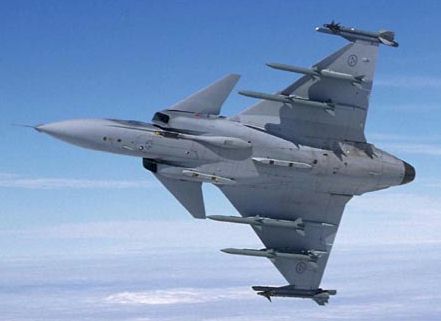 Another, more recent photo shows the same BK27 cannon fairing and everything else on the fuselage underside. An interesting detail is the armament pylon under the starboard jet intake, not present on the previous photograph. Most recent photographs of operational machines show this pylon. 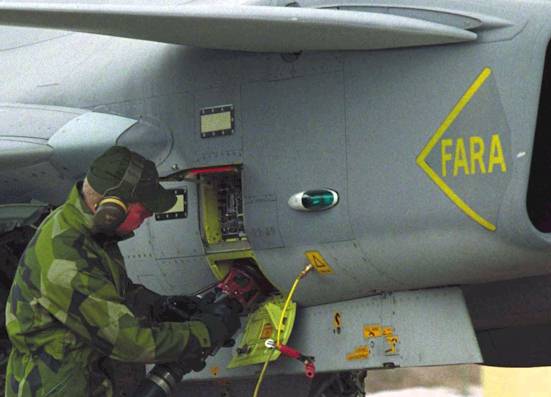 This photo again shows much of the detail mentioned before: <FARA mark as a decal, formation flying lights, green position light, and an armament pylon under the jet intake.

The ground crew member is attaching (or detaching) a fuel hose. The open hatch above the fuel port contains fuel control panel. Should you plan to make a re-fuelling diorama, don’t forget the yellow cable in the front… it is a electrical ground cable which prevents an unpleasant surprise of static discharge during the process.

As can be seen, all interior surfaces are covered with the same yellow-green primer. Photo: SAAB 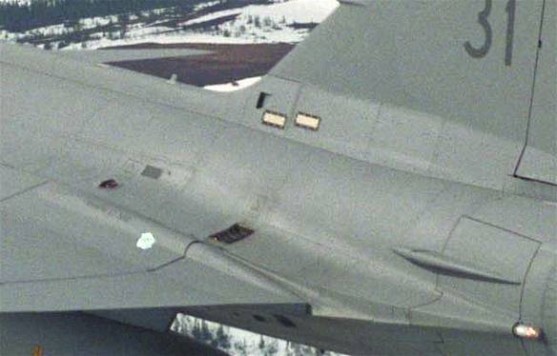 A nice close-up of the Gripen in flight shows the mid-rear part of the fuselage and wing root. 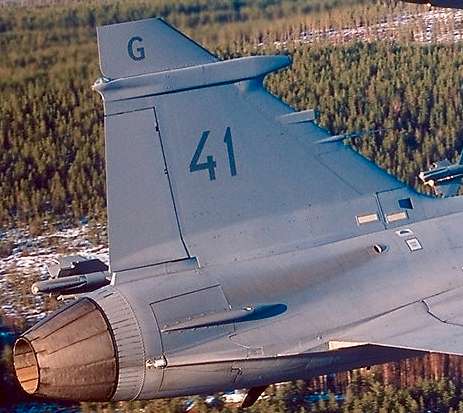 Another in-flight photo shows the characteristic stain developing behind the APU (Auxiliary Power Unit) outlet on the upper starboard side of rear fuselage. Although operational Gripens are generally held in pristine condition, this stain is a common occurrence. Photo: SAAB 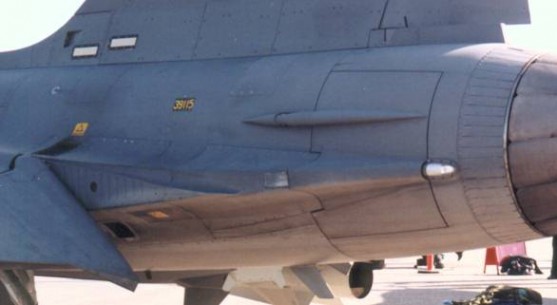 Still better view of the rear air brake. The brake plate itself is nicely faired into the rear wing fillet, with a hydraulic actuator hidden inside. The second hinge is covered by the narrow fairing above. Photo: Björn Ringholm 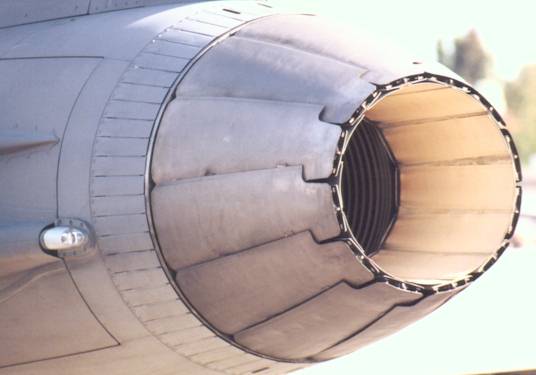 Nice view of the blast tube of Volvo Flygmotor RM12 engine (modified General Electric F404J) . Interestingly the inside of it is… magnolia pink in shade. Photo: Björn Ringholm 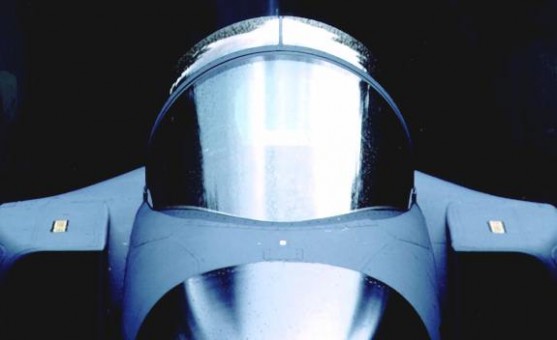 This SAAB’s publicity photo gives a good idea about curvature of the windscreen. Note also the curved shape of the rim at it’s lower edge. Photo: SAAB 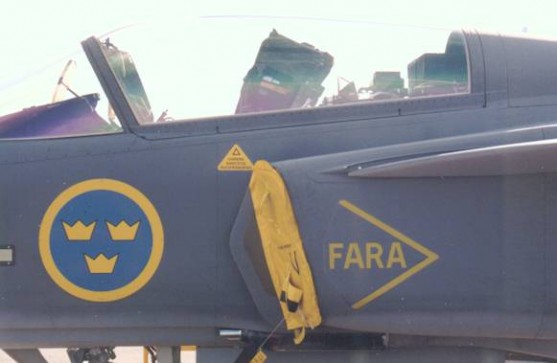 The shelf behind pilot’s seat is full of equipment. Unfortunately we didn’t come across any good photos of it, but these two views should give a general idea about what’s inside. The ejection seat is Martin Baker Mk.10LS.

The canopy is hinged, opening to port side. Photo: SAAB 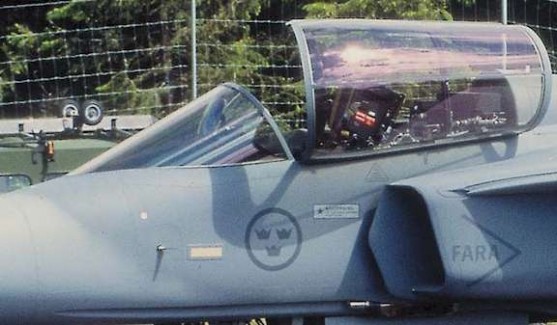 Two officially released photos of the instrument panel. This one depicts the training simulator…

The panel is dominated by three computer displays, which can show different things depending on the pilot’s choice. The picture shows a standard setup with flight instruments to the left, tactical map in the middle and radar display to the right.

The glass plate up front is of course a HUD (Head-Up Display), with a systems control panel below. Photo: SAAB 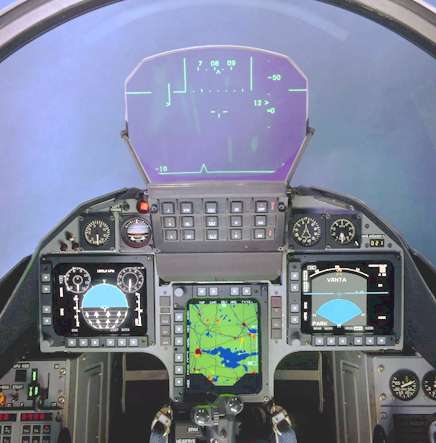 …this photo, on the other hand, appears to show a real thing. As can be seen, the displays are monochrome. According to Erik Gustavsson, the picture was taken when the plane was standing on SAABs airfield in Linköping, heading north-west. You can see the faint contours of lake Vättern on the map screen. Photo: SAAB 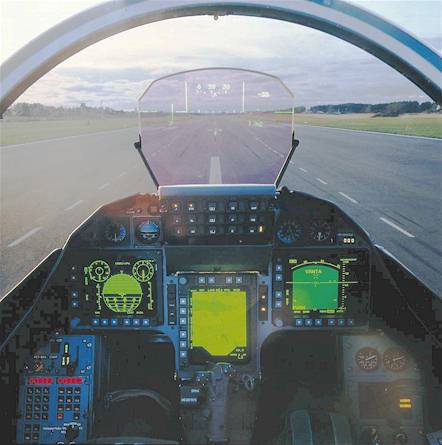 Aircraft of the planned 3rd production series JAS 39C will have all the analog instruments removed and color data displays. This is how it will look like.

Note the same position on the map! Photo: SAAB 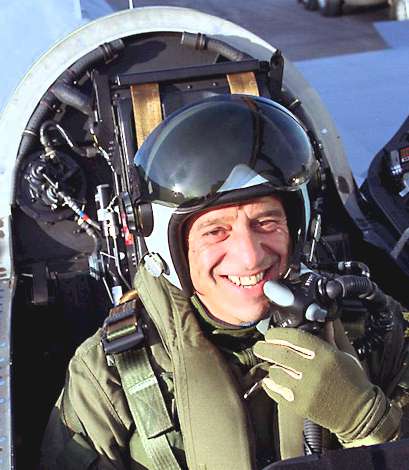 The smiling guy is Chief Commander of the Czech Air Force, Lieutenant General Ladislav Klima, one of the Czech pilots flying JAS 39 during the official visit to Sweden in October 1997.

Behind him there’s a cockpit rear wall with lots of plumbing. Photo: SAAB

This article was originally published in IPMS Stockholm Magazine in April 2000.