de Havilland had a hit with the D.H. 60 Moth, a cheap, sturdy two-seater with pleasant flying characteristics, first flown in 1925. Flying clubs, private individuals and air forces all bought Moths to use for flight training or just pleasure flights. The Moth and its successors proved their worth by a number of record-breaking flights in the 1920s and -30s. Several other constructions from de Havilland also had “Moth” names, such as the Fox Moth, Puss Moth, Leopard Moth and Giant Moth (and, in a sense, even the Mosquito), but these were completely different aircraft. Direct descendants of the original Moth construction were the D.H. 60G Gipsy Moth, powered by de Havilland’s own Gipsy engine; the D.H. 60GIII Moth Major with larger engine and the D.H. 60M Moth with steel fuselage structure which was developed into the D.H. 60T Moth Trainer. The last was a strictly military version intended for basic training and was used not only by the RAF, but also several other air forces around the world, including the Swedish Air Force who had ten Moth Trainers under the Sk 9 designation as well as two Gipsy Moths known as the Sk 7. A number of Moths were license manufactured abroad with the type designation D.H. 60X, e g in Finland by Valtion Lentokonetehdas for use in the Finnish Air Force.

Based on the experiences from the Moth Trainer, an improved version, known as the D.H. 82 Tiger Moth, was developed and first flown in 1931. The most visible difference was the swept-back wings, a consequence of moving forward the centre wing struts so that the occupant of the front seat could bale out by parachute without having to squeeze out between the struts. The D.H. 82 had a 90 kW (120 hp) Gipsy III engine, but was soon supplanted by the D.H. 82A Tiger Moth II with a 100 kW (130 hp) Gipsy Major I and the top of the fuselage skinned with plywood rather than fabric. Other subversions were the D.H. 82B Queen Bee, a radio-controlled version used for gunnery practice, and D.H. 82C, a “winterized” version produced by de Havilland Canada.

The initial production went almost exclusively to the military market and not until 1938 did a trickle get onto the civilian market, but most were soon requisitioned by the Air Force at the beginning of the war. Like the Moth, many air forces apart from the RAF used the Tiger Moth, and a considerable number were also license manufactured. Three were built in Sweden by ASJA, but in total 16+20 of the two subversions were used by the Swedish Air Force as the Sk 11 and Sk 11A. One, escaped from Norway during the German invasion, was used by the Finnish Air Force. Over 7000 (9000, according to some sources) Tiger Moths were built in total.

When air forces began decommissioning Tiger Moths after the war (many were still in use by 1950), an eager civilian market bought them and they were ubiquitous in flying clubs all over Europe. Many are still flying.

The subject for our walkaround is D.H. 82A T6818 at the Royal Air Force Museum in Hendon.

Originally, RAF trainers were aluminium-doped all over, just like fighters, but from July 1936 they were painted all yellow. During the Munich crisis in 1938 all RAF aircraft were camouflaged but the trainers retained yellow on their undersides. Originally the yellow underside extended some distance up along the sides – officially three-fourths, but to my eyes it usually looks more like half-way up – but in November 1940 the order was given to extend the camouflage all the way down the fuselage sides. In combination with the A1 type roundels (with equal width circles of yellow, blue, white, red), which in mid-1942 were to be changed to C1 roundels (with a narrow white circle), we see that this plane is painted as it would have looked in 1941 and the beginning of 1942. The aircraft serial is painted in black underneath the wings and on the back of the fuselage as per regulations. The identity number “91” is in white; yellow and Sky were other common colours. The propeller is black with yellow tips, the spinner tip is in blue.

The camouflage colours are the usual Dark Earth and Dark Green of the Temperate Land Scheme, but on biplanes the upper surfaces of the lower wings were to be countershaded in Light Earth and Light Green. However, there is no obvious difference in shades on the wings of this plane. 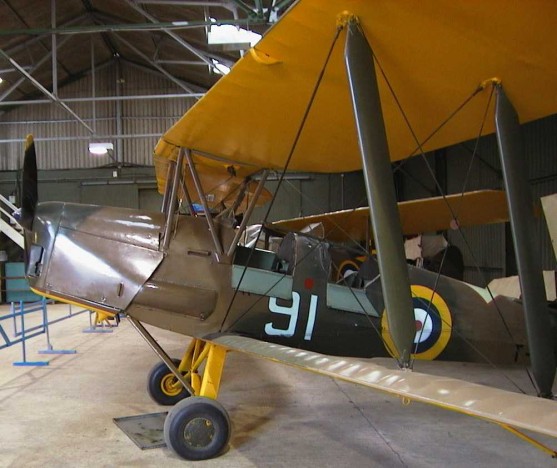 Closer up. Note the tie-down ring below the wing. 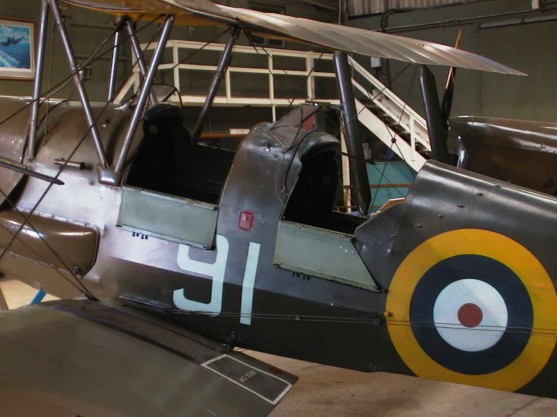 Close-up of the cockpits. As we can see, all struts are ahead of the front cockpit, giving easier access to it. The little entrance hatches on the cockpits (there are similar hatches on the opposite side) show off the Interior Green to good effect, unfortunately the actual interior of the cockpits is too dark for us to see details and the JPG compression has not left anything for image enhancement.

The rear cockpit has attachment points for a blind-flying hood which are clearly visible in this picture. We can also see the padding in greenish leather above the instrument panels.

The rudder cables run on the outside of the fuselage. 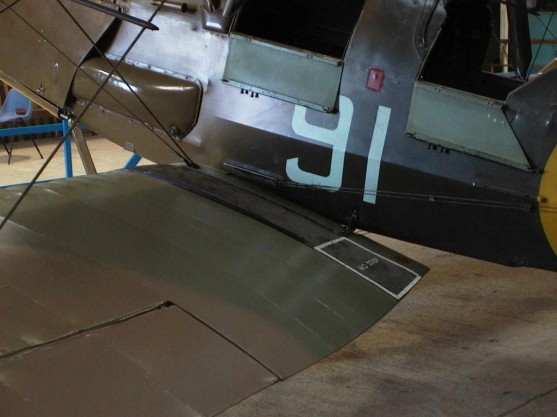 Looking down a bit we see the wing walk area of plywood over the fabric wing, there is an identical area on the other wing. From this angle we also see the size of the outlet for engine cooling air. 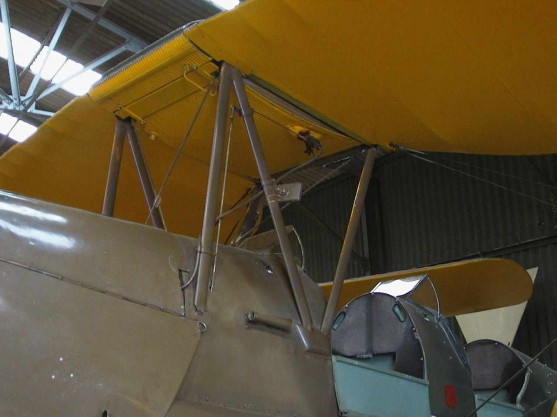 Some more cockpit area details. The short length of pipe in front of the cockpit is a venturi tube for airspeed measurement. The rear-view mirror is an interesting feature – presumably not intended to check for enemy fighters but rather for eye-contact between pilot/teacher and passenger/pupil. The back rests are fabric or possibly leather, apparently attached to the cockpit interior with press studs or rivets. The fuel line from the overhead tank is very simply just passed through a cut-out in the engine cowling. 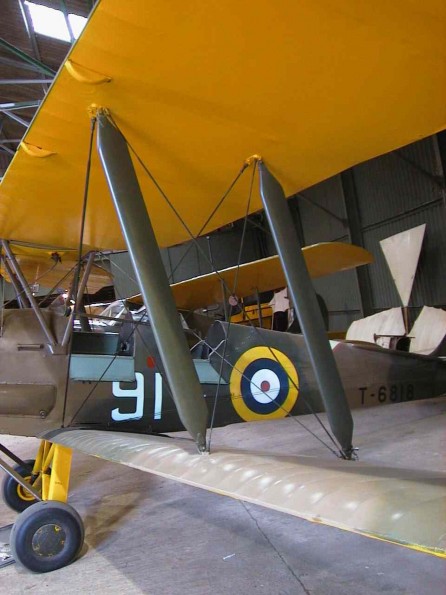 A close-up of the wingstruts, note the narrow attachment points to the wings and the spreader bar for the wires (somewhat difficult to distinguish in this picture, though). In the background we can also see a square shape on top of the rear fuselage. This is probably a gas detection marking, these were common on second-line aircraft in 1940–42 – exposure to poison gas is supposed to turn the surface black. Note that the surface is a very pale green rather than pure white. 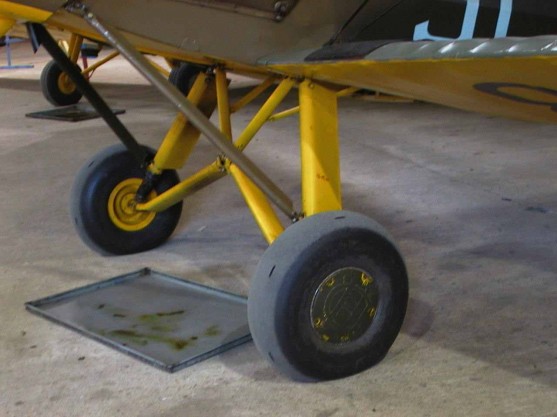 Landing gear. Note the DH logo on the wheel hub. 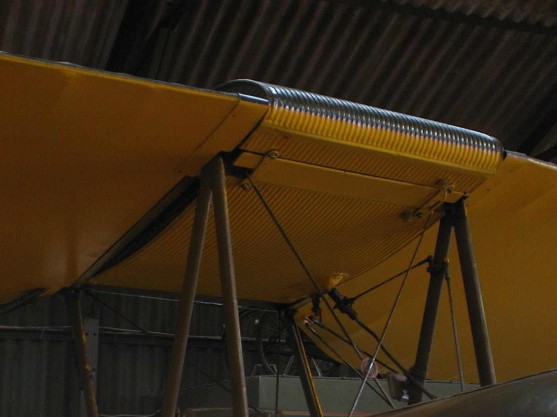 Another characteristic feature of the Tiger Moth: the fuel tank in corrugated metal in the midwing. [] 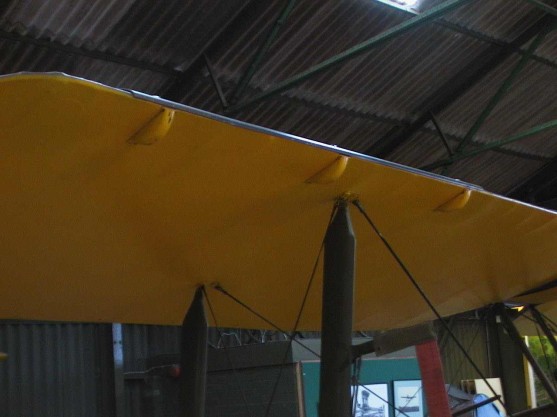 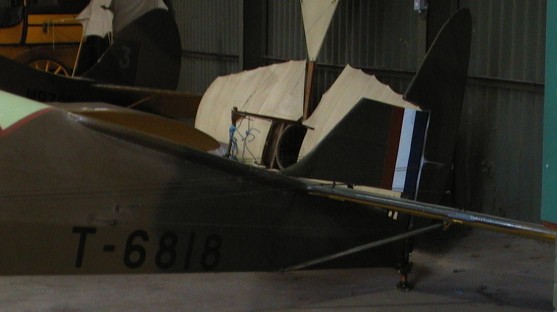 A somewhat dark picture of the tail end. We see the elevator cables coming out of the fuselage below the rudder cables. Note the separation between tail fin and stabilizer. The “strake” in front of the stabilizer improves [] spinning characteristics, I have been told.

Considering the importance and the elegant lines of the Tiger Moth, there are surprisingly few kits of it. Airfix and Aeroclub have produced models in 1/72, but they are both currently out of production, as is Matchbox’ offering in 1/32. Aeroclub has a Tiger Moth in 1/48 and Pavla has announced a 1/72 kit of the D.H. 82C for early 2005.  [AZ Models and Special Hobby have announced Tiger Moth kits in 1/72 and 1/48, respectively, for 2012.]

This article was originally published in IPMS Stockholm Magazine in March 2005, updated and corrected in 2012.