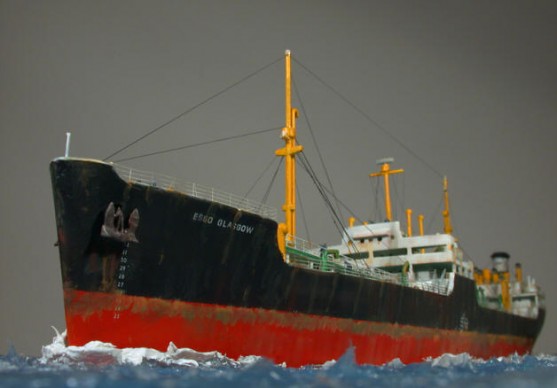 I bought this kit for a song from NNT models to enable reaching their minimum order value . I had visions of a battle of the Atlantic diorama using the tanker along with some kind of escort vessel and maybe even a U-boat. In the end, the model turned out differently.

I only used web resources in finding out more information about the T2 tankers, as the project wasn’t meant to be historically accurate but more of a training exercise using an inexpensive kit. I intended to improve it and try out weathering techniques along with an ocean base. The weird hull shape – neither full hull nor waterline – looked believable to me when used as a waterline model of an empty ship, either riding high at anchor or sailing without cargo. 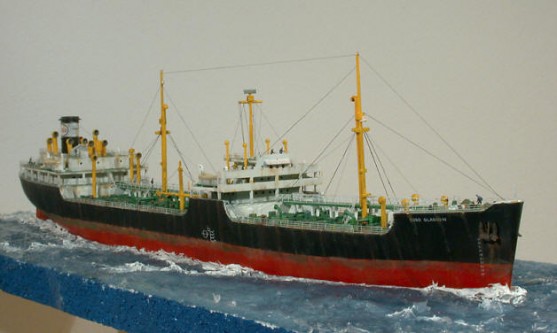 So here’s what I did…

I checked up on the Esso Glasgow and found just some meagre pictures of models. A walkaround of a T2 tanker showed some more details, but none of the area which interested me most, the large skylight on the aft superstructure. Whereas the rest of the kit looked pretty good, especially given the age of the moulds (c. 1959), the skylight looked crude and oversized. 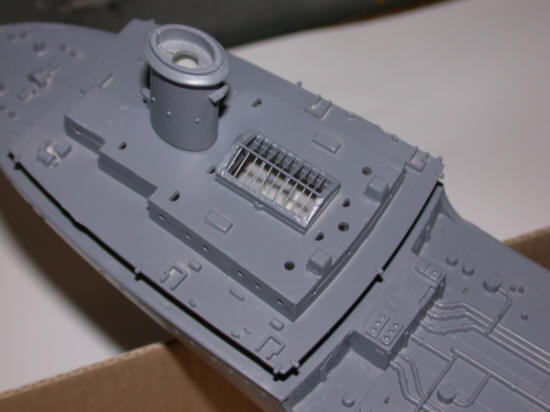 I started cutting away plastic exactly there, sawing away the framing and replacing it with scrap photoetched railing. I then investigated where I would have to replace the moulded on stairs with photoetched items. I traced the various kit deck level parts, labelling them A through G and noted where the stairs would have to be so as not to forget the locations. Removing the moulded stairs was done with a razor saw and needle files.

I also removed all the moulded-on railings around the ship, using a Dremel and the abovementioned tools. This was especially demanding on the flying bridges. I could have built them from scratch and I guess that would not have been much more work than grinding off, evening out , filling and sanding the kit parts as I did. The vertical deck supports along the bridge and aft superstructure had to be replaced from Evergreen stock, as they were designed to rest on the moulded on railings – thereby after removal of the railings ending in mid-air.

The fit of the kit parts was generally good, a pleasant surprise considering the mould’s vintage.. The only really annoying thing was the design Revell chose for reproducing the portholes. They are represented by moulding one half of the bulkhead with each deck level, leaving semicircular indentations that when joined made the porthole.

Oh, and I did I mention the“ beautiful“ seam along each bulkhead that was created, at no extra cost, with this method?….

I spent many hours filling, sanding, re-filling and re- sanding those, err, numerous seams prior to even thinking about painting the decks.

But in the end I arrived at a point where I had to decide: either toss the model against a wall or proceed from here. I did try some masking and painting as I’m not really good at brush painting and much prefer the airbrush . Well, that turned out to be even more work than masking your average aircraft … 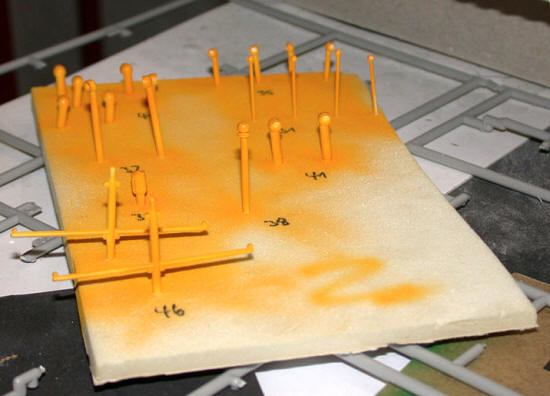 As regards the colour scheme, I skipped Revell’s instructions and painted all the decks green instead of painting some in wood colour. I assumed (and some of you out there are sure to be more knowledgeable than I, so please feel free to correct me) that expedited war construction would immediately have skipped posh wooden decks, so I did not use them either. The hull was sprayed flat black, the underwater area an appropriate shade of red that looked right to my eye. Superstructure was sprayed white, and I really tried to achieve a clean look in the beginning. The numerous vents were cleaned up and painted Lufthansa yellow, touched up on the inside faces with red.

I must at this point mention my troubles with Revell #8. The flat black, sprayed using Revell thinners in my usual fashion, WOULD NOT DRY PROPERLY. Instead, infuriating and annoying small sooty black crumbs formed all over the model’s surface…

In the end, I had to clean the entire paint-job off and start afresh using Model Master paints. This was of course after the red had been masked and painted …

I learned later that Revell of Germany has had problems not only with some of their paints but also with their glues, using a new formula that doesn’t quite work . I can second both, having thrown away glue and paint after having first blamed my own clumsiness.

Having completed basic styrene construction, I turned to photoetch. I had already decided only to use photoetched railings and stairs, along with some spare vents. The stairs and the flying bridge rails came from Saemann, whereas the longer stairs and the remaining railings are WEM material from their 1:400 extra fine railing set. These items are markedly more detailed and come with supports and water outlets, but they’re a lot more fiddly to handle . The Saemann parts, whilst great on my Zvezda Varyag, weren’t fine enough for this project, the stair handrails being decidedly hefty for 1:400 scale; so these were clipped down.

I worked my way through the photoetched components, sometimes rejoicing, sometimes cursing when my fingers again got glued a zillion times better than the etched brass ; or when I didn’t get the bending accomplished as crisply as I had wanted. But hey, it was all good practice … I painted all the photoetch prior to attaching, so only small touch-ups were needed later on. 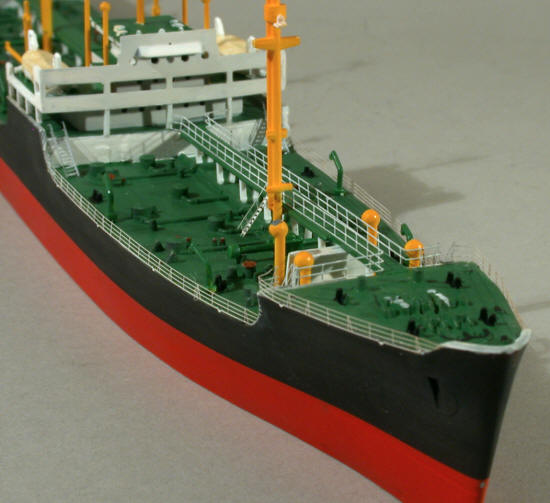 The masts were used out-of-the-box, only the flagpoles were replaced with wire. For a more colourful look masts were painted Lufthansa yellow as well.

Then I sprayed the whole ship with Future, wishing to achieve a glossy surface for decaling after which the decals were applied using Micro Sol and sealed with more Future , followed by another coat Flat Future, this being Tom Cleaver’s mix of Future with Tamiya acrylic flat base.

Next came the weathering. I had all those James Bond and other movies in mind with Derek Meddings models used, picturing in my mind hard used, battered and rust streaked hulls. So I set to work using watercolour washes and pastel chalks. Both methods appealed to me because of their potential to be corrected.

I tried my hand with both techniques, taking pictures after a while, revisiting what I had done and redoing where needed. I tried to achieve a streaky look, using black, red and ochre watercolours. I found the black useful for toning the effects down. The pastel chalks were efficient in filling out corners and in blending yet more.

The anchors were cleaned up, as I now had decided to model the ship at speed, not at anchor as originally intended. They were then painted using MM exhaust metalizer, and weathered using rust coloured pastels. I took special care to produce a rusty runoff below the anchors.

I had received some unpainted crew figures in 1:350 from Martin Kohring of IG waterline and modellversium.de.

These figures were painted blue, with black boots, flesh faces and hands plus hairs and cap added. Then they were glued to selected sites on board.

As previously mentioned, I initially wanted to model the ship at anchor. I imagined the ship floating near some abandoned pier prior to scrapping or anchored in some equivalent to Portsmouth’s rotten row. But somehow I decided against that.

I made the ocean base following German master modeller Frank Ilse´s method. As it is my first try, it still leaves a lot to be desired, but it worked anyway. I cut a piece of styrofoam to size, not having a convenient picture frame I simply painted it blue around the borders. Bear in mind this this is just a training project. I then made a template of the ship’s bottom by tracing it and cutting a template from cardboard. This template was fixed to the styrofoam with pins. I then spray painted the styrofoam in various shades of blue, using darker shades nearer to the ship and trying to bring some life into the base by varying the shades overall. I will use cheap children’s paints for my next project as they will cover the styrofoam more effectively. 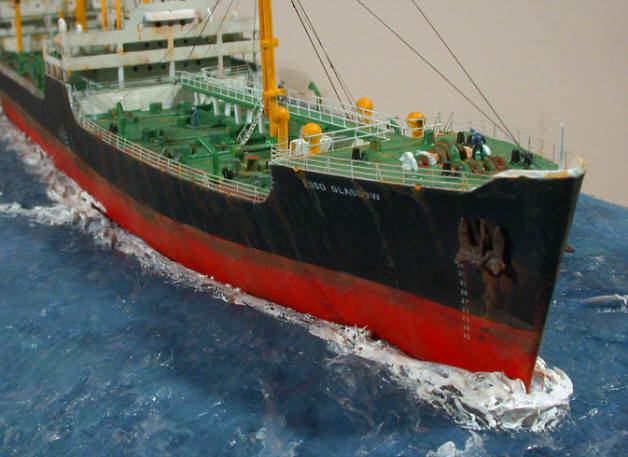 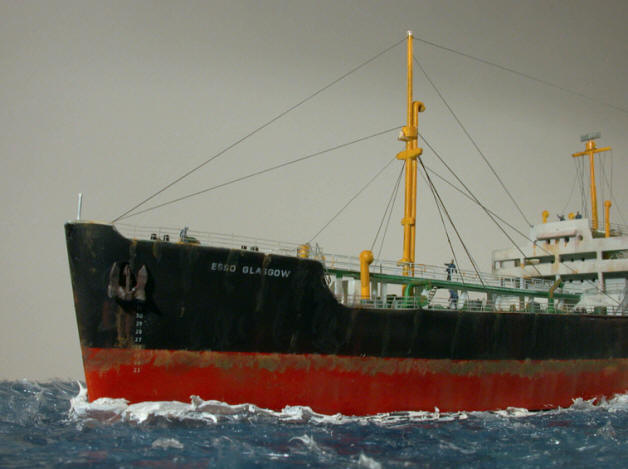 After drying I applied generous amounts of cheap clear silicone caulking to the base using a spatula from the hardware supermarket. I sculpted the material further using a spoon and a toothpick for the wake. Some retouching was necessary, along with some clipping of silicone threads. The wave tops were painted flat white after drying. 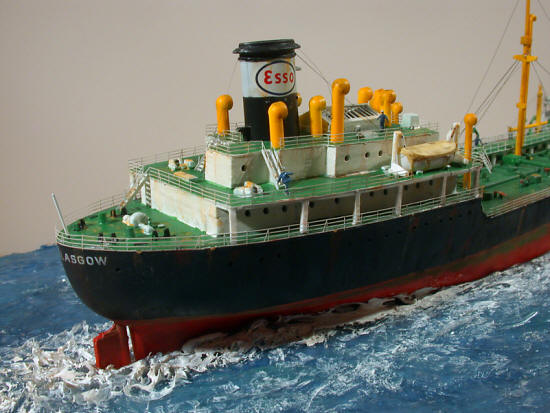 After removing the template I fitted the ship to the base. This necessitated some adjustments but was accomplished using more of the silicone caulking. The ship was glued to the base using yet more silicone.

Finally, rigging was done using black stretched sprue, attaching with liquid styrene glue. Once this was completed a flat clear coat sealed the weathering and covered my glossy glue marks.

The pictures were taken with my trusty Nikon 995, using as much depth of field as possible and custom white balance. I tried to achieve a believable perspective and get „the look“ of this old and trusty survivor from the grim battles along Britain’s lifeline. 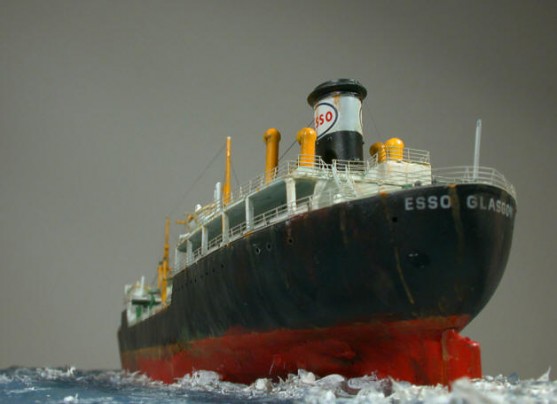 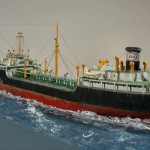 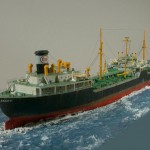 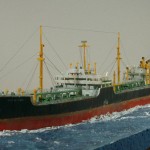 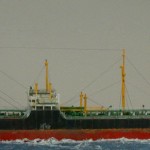 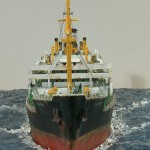