Hoppa till innehåll
Hem » Artiklar » Thunderbolt to the Rescue 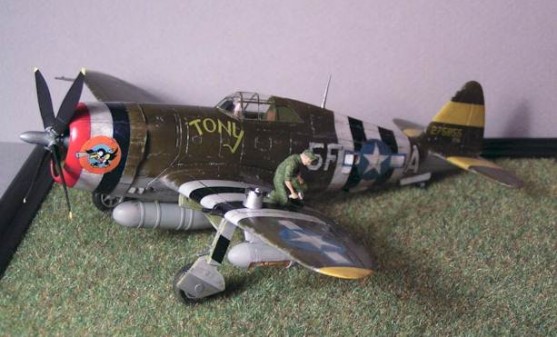 It all started with an article of an aircraft wreck found in a lake in Great Britain. It was an aircraft from the 5´th ERS (Emergency Rescue Squadron) that had been used to save pilots that landed in the water. Since I already was planning for a Spitfire ASR II that was used for the same purpose I was naturally interested. I learned that the ERS units used old war-weary fighters (distinguished by the suffix WW at the serial number on the fin). The aircraft were modified to carry rubber dinghies in the underwing containers and a smoke bomb under the fuselage that helped the rescue ships to locate the downed pilot. To reduce weight, two out of four guns in each wing were removed.

Measured from the idea to completion, this project took a looong time. Initially, I managed to find decals from Microscale for an ERS ’Bolt but than the project was shelved. A couple of years later I found an old issue of Scale Modeler where such a plane was built and my interest was renewed. I purchased the Academy 1/72 P-47D and started the search for suitable stuff to hang under the wings. But again the interest faded away. When the editor of this site and my club colleague Martin Waligorski started on his Academy P-47 and told me that it didn’t need any filler I just had to start on the kit.

I started building the interior and painted it with the new Humbrol green no.226. I added seat belts that I cut from a brown envelope and gave the interior a wash of Humbrol (33) flat black mixed with white spirit. A silver dry brush on the rudder pedals and in few other places rounded off the cockpit phase.

Subsequently I have assembled the entire airframe leaving out the landing gear, masked of the canopy with Bare Metal Foil and started painting.

I had to make the rescue equipment myself. 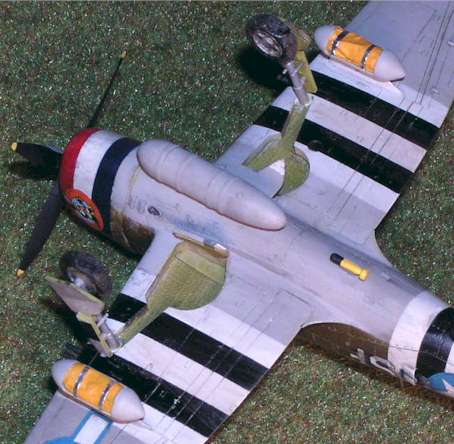 The rubber dinghy containers under the wings were made from a couple of bombs originating from Heller Messerschmitt 109 that. Each bomb was cut open and the fins removed. The dinghies were made from cigarette paper that was folded and dipped in a mix of white glue and water.

The small smoke bomb under the fuselage was picked from the Airfix Gladiator kit.

I wanted a worn look on the aircraft so I started to experiment. First I covered the whole airframe with a coat of yellow primer. I used Tamiya XF-4 Yellow Green for this. Over this I sprayed a very thin coat of Olive Drab XF-62 that I had mixed together with the X-22 Clear. I tried to let the yellow primer show through to get the worn look. 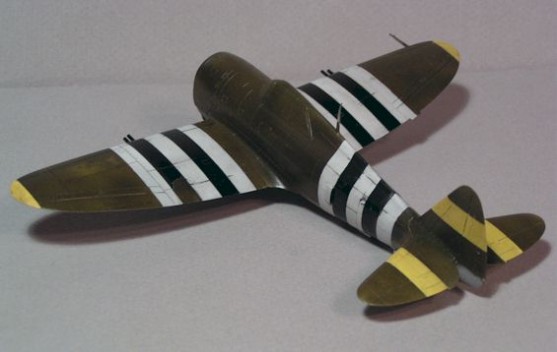 I then masked for a soft demarcation line between the top and underside colours. By tearing lengths of masking tape in your hands rather than cutting them with a knife a feathered edge can be obtained fairly easily. With masking in place I painted the underside with Tamiya XF-19 Sky Grey. I wanted the yellow underpaint to be less visible here as I thought that this the underside colour would have been more protected from the weather than the upper surfaces.

I wanted to make a plane with D-Day invasion stripes, 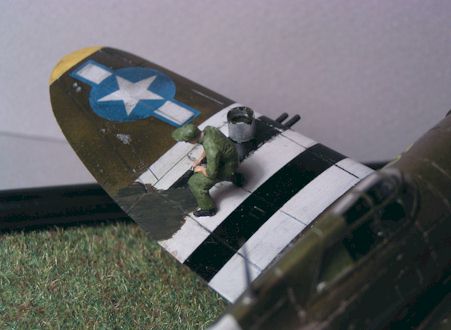 so I masked off for the stripes, painted the area white, used more masking tape and painted the black stripes. However, when I removed the tape I wasn’t happy with the result. I felt that the clean stripes looked odd on the worn plane so I added a black wash on the entire aircraft. I used a rather heavy mix that was almost covering and wiped it off lengthwise from the nose toward the tail leaving some left in the airflow direction. I should of course have put on the decals before the wash so I had to try and fix this afterwards.

Microscale had made the stars-’n-bar insignia in a lighter blue than normal to simulate fading. I do somewhat regret using them as I think that they look to light on the model.

I finished everything by doing some chipping along the panel lines. I used an old silver from Molak that has less shine than Humbrol silver.

So what is my conclusion from this project? To me it was a real luxury building an aircraft and not having to use any filler. I feel that the most boring thing in building aircraft models is to fill and sand the gap between the wings and fuselage. I didn’t have to do it this time.

The kit has recessed panel lines and two different propellers and a very nice price. I have no idea how it looks compared to the real thing, but to me it looks like a P-47.

My weathering was perhaps overdone as this was my first attempt on doing this on an aircraft so it wasn’t easy to know when to stop . But I really like this better than all the clean planes I built before and it was fun to ”play”.

It been a long time since I had so much fun building a model. 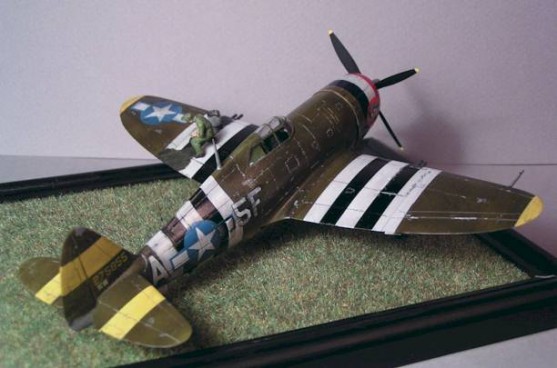 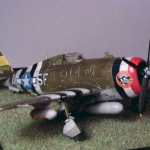 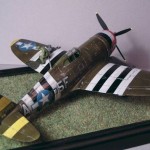 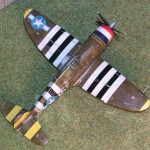 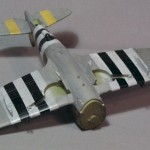