Lance Wade was one of the top US aces fighting within RAF. In early 1941 he volunteered into American Eagle Squadrons but in fact he never flew with any of them. Instead of that he was posted to Malta and later to North Africa. There he joined 33 Sqn and started his long run of victories. In November 1941 he managed to claim six kills (four individual and two shared) while flying various Hurricanes Mk I. On December 5th 1941 Wade was shot down by Flak while strafing enemy positions in Agadabia. He managed to survive and after a long walk across the lines he was picked by friendly forces.

During summer of 1942 Lance Wade added eight more kills to his total before he finished his first tour and returned to United States.

In January 1943 he joined Spitfire equipped 145 Sqn and at the end of the month he became its CO. During final stage of African campaign Wade scored 8 more kills over Tunisia. Finally he scored two more victories over Italy.

On January 12th 1944 Lance Wade was killed in flying accident when his Auster Mk III hit ground at Foggia A/F.

Totally Lance Wade scored 22 individual and 2 shared victories, all of them within RAF. 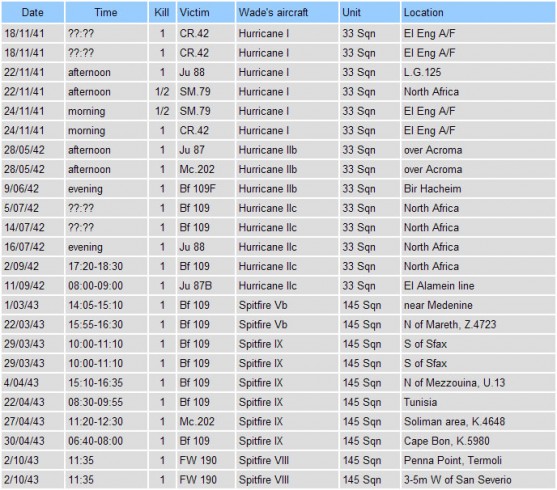 Later, when Wade switched to Spitfire IXs, the plane EN186 became his usual mount. He scored two damaged (on April 7th and July 10th) and three confirmed kills (on April 22nd, 27th, 30th) with it.

Below you can see Wade’s Spitfire Mk Vb trop ES252 ZX-E. He was shown in this very plane on the wartime film, when he lead 145th squadron on take off.