The Hawker Hart and its many derivations, the Demon, Audax, Hardy, Hind, Osprey and Hector must have been the multi-role aircraft of the 1930s. Constructed by Sydney Camm, the prototype Hart flew for the first time in 1928 with production machines reaching RAF service in 1930. A light bomber, the Hart gained its excellent reputation not only by its reliability but also through speed and maneuverability exceeding that of contemporary fighters. These Hawker biplanes represented the peak of biplane development, and they brought the Hawker company a great success, allowing it not only to sail through worldwide recession with flying colours, but also gaining considerable export markets. Overseas customers included Estonia, South Africa, Southern Rhodesia, Yugoslavia and Sweden.

Sweden acquired three Harts in 1932. At the same time license was purchased for series production in Sweden by ASJA, Götaverken and CFM. 42 machines were produced in total. In Swedish service the aircraft received a military designation B 4 and was primarily used as a dive bomber.

All Swedish B 4 Harts were powered by radial engines,

which resulted in an angular, less elegant appearance than their British Kestrel-engined counterparts. The three Hawker manufactured Harts (B 4) were fitted with Bristol Mercury VII engines of 580 hp. Aircraft produced in Sweden used the similar license-built Nohab Mercury VIIA engine and designated B 4A. There were also two Swedish-produced machines powered by Bristol Perseus XI engines of 755 hp with the designation B 4B.

Contrary to popular belief, the Harts saw first-line service during World War II. During the Winter War of 1940 between Finland and the Soviet Union, the Swedish volunteer unit F 19 operated for 62 days in the northern Finland. The unit was equipped with aircraft purchased with the money collected among the Swedish public – J8 Gloster Gladiators Mk.I and B4 Hawker Harts.

There were five Harts in F 19, of which three of them were lost in service. All of them were flown with Finnish national markings. Individual aircraft carried identification letters R, Z, Y, X and M respectively.

This month’s walkaround subject is a B 4A beautifully preserved and displayed at the Swedish Air Force Museum in Linköping, Sweden. The aircraft carries the original camouflage of F 19’s ”M”.

B 4A Hawker Hart in detail 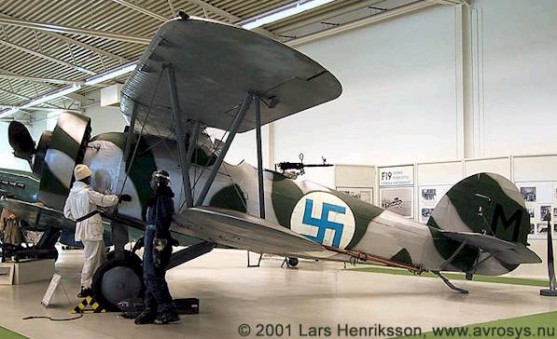 Overall view of the B 4A Hawker Hart on display in the Linköping museum. The difference in shape from the Kestrel-powered original is immediately obvious. There are also other differences which will be pointed out further in the text.

The aircraft is believed to carry a faithful reproduction of the 1940 paint scheme of the F 19’s ”M”. Camouflage colors are dark green and silver over light grey with Finnish national markings and black identification letter on the fin. Photo: Lars Henriksson 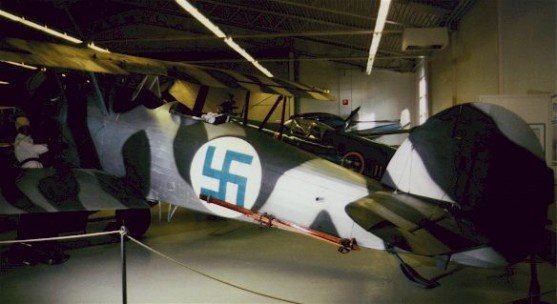 We’re sure that all but novice aviation enthusiasts will already know this: the Finnish Air Force blue swastika has no connection whatsoever with Germany or the German Luftwaffe.

Finnish air forces as well Finnish tank troops used the Swastika as their national identification symbol between 1918 and 1944. Like was the case with many other newborn air forces, the Finnish symbol originates from one pilot’s personal markings. During the Finnish Civil War of 1918, Swedish Count von Rosen donated his aircraft to Finnish government. The machine carried von Rosen’s family symbol of Blue Swastika. After The Civil War Finland’s newborn Army adopted that blue swastika as a national symbol of Finnish Air Forces. Later, tank troops also adopted that new symbol. Photo: Martin Waligorski 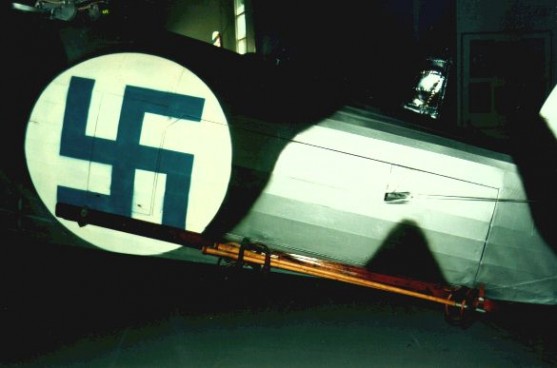 All Swedish Air Force Harts were also equipped with ski undercarriage as an alternative to conventional wheels. However, the aircraft could also carry extra winter gear for the crew – a pair of wooden skis which during normal flight could be carried strapped along the rear fuselage. Photo: Martin Waligorski 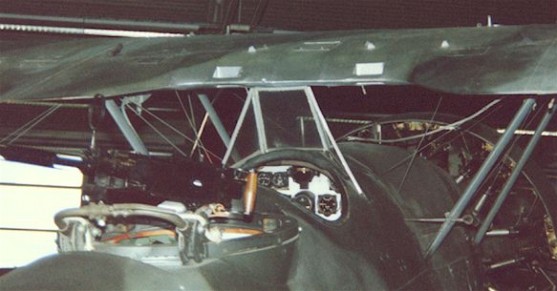 View of the cockpit section. Note the two grab handles on the trailing edge of the upper wing.
Photo: Martin Waligorski 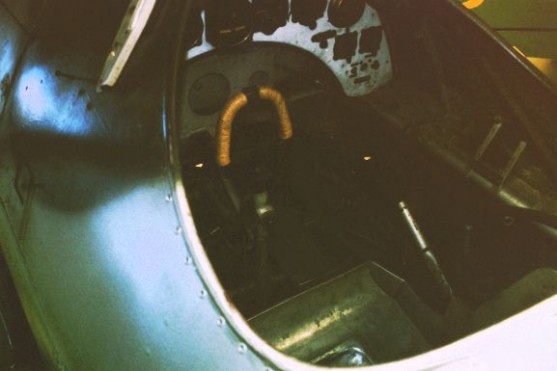 Pilot’s office. Of note is the stick with the familiar RAF-style ”spade grip”. What cannot be easily seen due to the poor exposure is that the aircraft, like many other period biplanes, has no cockpit floor. The seat and rudder pedals being mounted on convenient fuselage framework. Photo: Martin Waligorski 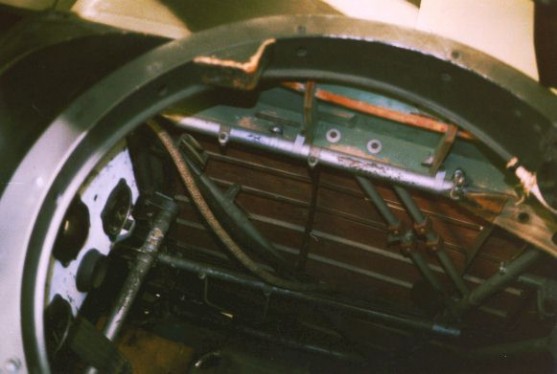 A better view of the gunners cockpit. The floor here is made of plywood. Steel tube construction can be seen to advantage, as well as fuselage longerons and the inside of fabric covering. Note how the depth of the gun ring varies around its diameter. Photo: Martin Waligorski 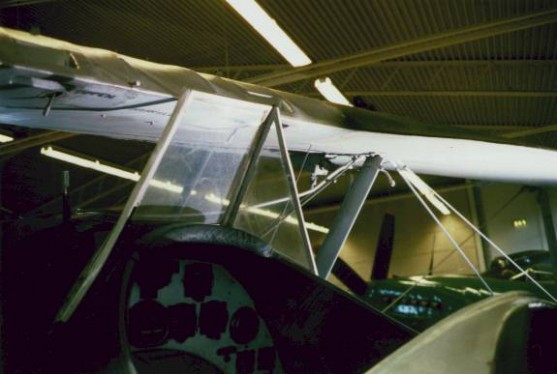 Pilot’s cockpit and windscreen. The instrument panel is silver with all dials in black. Photo: Martin Waligorski 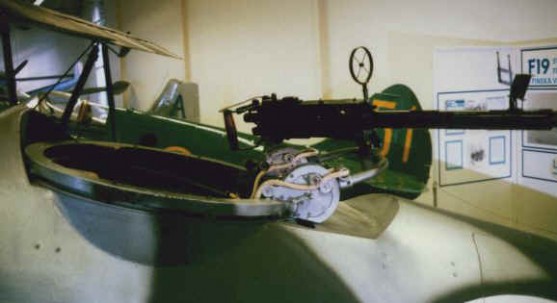 Gunners cockpit gun ring. It is of Hawker design identical to that of RAF Harts. Note the rubber bungee tensioners of the elevating mechanism. British Harts had a drum-fed Lewis gun in this position, but in Sweden a belt-fed ksp m/22 was used. Photo: Martin Waligorski 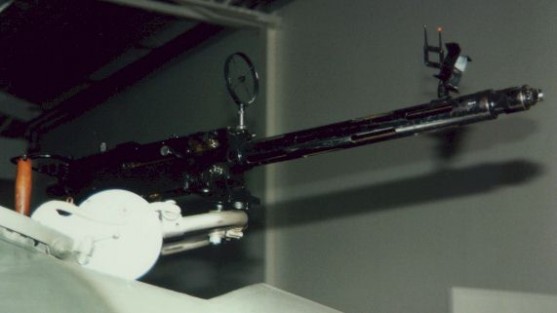 Close-up of the gun. This is the Swedish ksp m/22 of 8mm caliber. Photo: Martin Waligorski 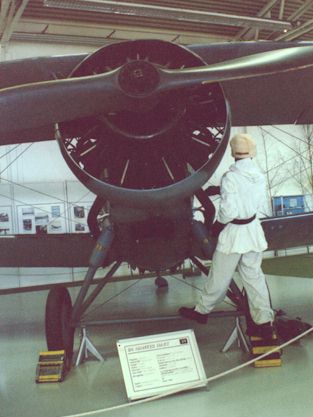 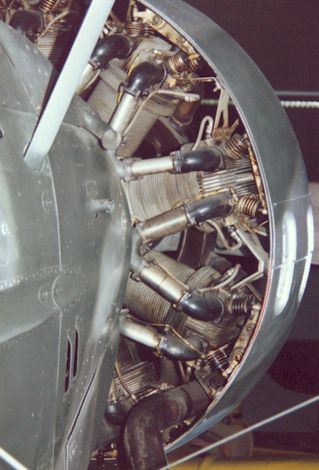 Details of the Mercury radial seen from the rear. It is interesting how much of the engine can be seen from this angle. Photo: Martin Waligorski 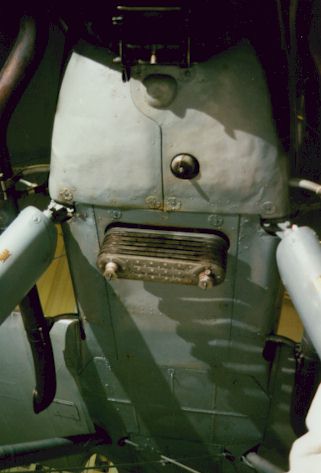 A view of the lower part of the fuselage behind the engine. Most prominent part in the middle is the engine oil cooler. This type of cooling device could be seen on all Hawker biplanes of the day. Visible in the photo are also all undercarriage attachment points – main compression struts to the front of the picture, rear member and the two bracing wires at the lower edge of the picture. Another interesting detail is the engine exhaust pipe. Photo: Martin Waligorski 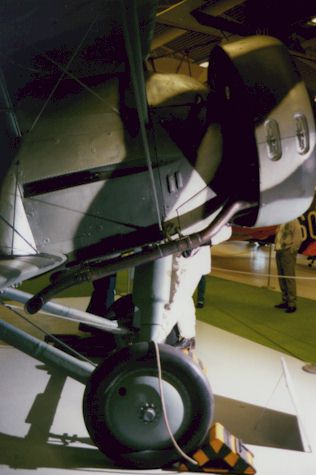 Main undercarriage wheels and another view of the engine cowling / exhaust pipe. The undercarriage, a typical Hawker design, was a simplistic construction consisting of the main compressing struts, rear bracing struts with cross-bracing wires and a cross axle. Photo: Martin Waligorski 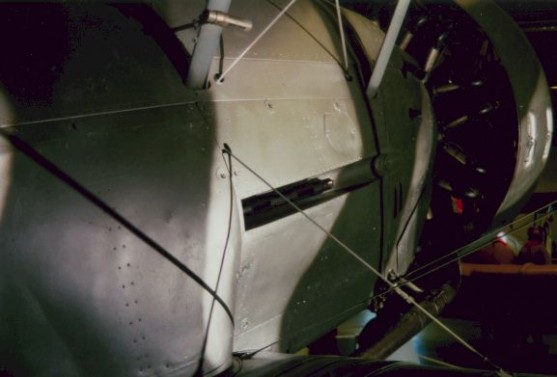 Fixed armament of the aircraft consisted of a single machine gun firing through the propeller arc. For some reason unknown to the author, Swedish B4s carried their guns on the starboard side, whereas in the original British Hart design the gun was placed on the port side. Larger breech mechanism of the Swedish gun resulted also in the prominent bulge seen here just behind the gun through. Photo: Martin Waligorski 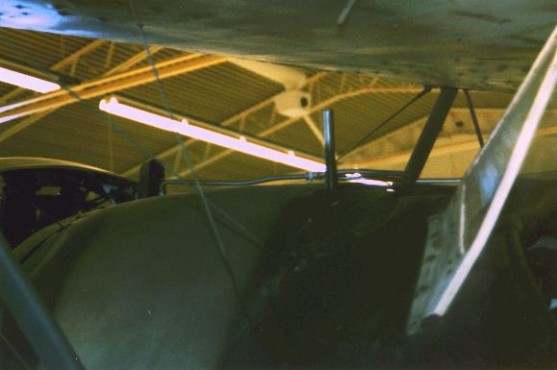 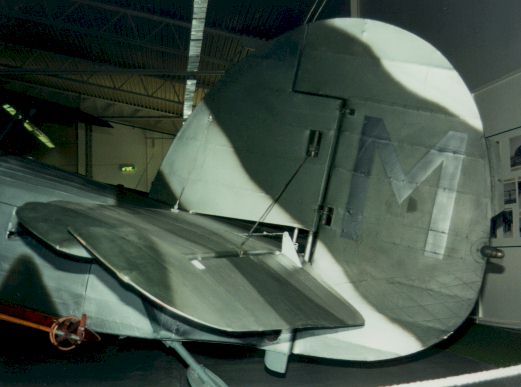 Although the tail of this Hart is larger and of different shape than for the inline-powered variants, its construction was common with all other Sydney Camm biplanes. One characteristic feature was the large gap between the fin and horizontal tailplane, allowing for the trim movement of the latter. Another one is the wooden ”heel” below the extreme rear fuselage. Yet another Hawker hallmark is the way bracing wires are attached to the fin. Photo: Martin Waligorski 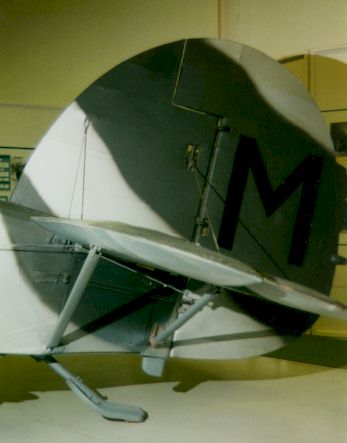 The Harts had no tail wheel – this novelty appeared first on later and much refined Hawker Hinds. Here a simple skid made all the work of the rear undercarriage unit! Photo: Martin Waligorski 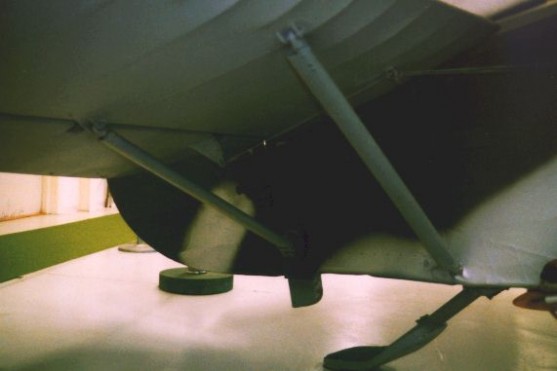 This article was originally published in IPMS Stockholm Magazine in July 2001.