One of the more successful pre-war Luftwaffe trainer aircraft was Focke-Wulf Fw 44 Stieglitz. The design was partly the work of a new chief designer at the Focke-Wulf factory – Dipl.-Ing. Kurt Tank. Tank was by then only 33-years old but had already a considerable share of experience from his previous employment at Rohrbach.

The new trainer aircraft was a two-seat biplane of classic construction, powered by a Siemens Sh 14a 7-cylinder radial engine. The prototype first flew in August 1932. Flight trials were conducted personally by Kurt Tank – a commendable habit which he maintained even with his later (and greater) aircraft despite being officially forbidden to do so.

The Fw 44 turned out to be a very successful aircraft, with fine harmony of control, great manoeuvrability and full aerobatic capabilities, which also made it famous in the contemporary aviation world. It was used in international aerial displays by pilots like Ernst Udet, Gerd Achgelis and Emil Kopf. The Fw 44 was not only used in Germany, but also in Rumania, Sweden, Finland, Argentina, Chile, Brazil, Bulgaria, Czechoslovakia, China and Turkey.

In Luftwaffe, the Stieglitz soldiered until the end of the World War II – mainly as trainer aircraft in the many Flugzeugführerschulen.

A small but interesting chapter in the history of Fw 44 is that it also served as a basis for the World’s first practical… helicopter. When Prof. Focke went on to build the first full-size prototype of the helicopter which was later to become Fw 61, he opted to rely on proven airframe. A Fw 44 was cannibalised for the purpose, lending its fuselage and power plant to a new rotor system with two large rotors on outriggers.

Contrary to what many may think, the Argentinean machines turned out to be far superior in quality to the ones built in Germany. The reason for this was lied in the nature of the Córdoba factory. At the time the Argentinean aero industry was in its infancy and the factory worked as a specialist workshop rather than have a production line. The aircraft were built almost entirely handmade, consuming many manhours of work.

While this production method somewhat unexpectedly resulted in high quality of the end product, it was also one of the reasons why the production was finally stopped due to the high cost per aircraft.

In Argentinean service, the aircraft were used for the primary pilot training in the Military Aviation. With time, surplus military machines were transferred to the various air clubs around the country for training of civil pilots.

Many of Argentinean Fw 44s grace the skies even today. The pictures below are showing the Fw 44J, registered LV-IST and LV-YZP, both operated by private owners.

At the moment of writing (spring 2003), the only game in town for modellers wanting a scale model of the Stieglitz is the 1/72 scale kit produced by Huma of Germany. 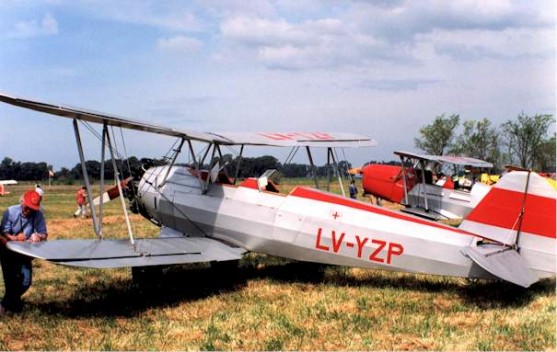 The Fw 44 was perhaps not the best-looking biplane of the 1930’s but it certainly ranked among the most pleasant to fly. Of biplane configuration, the upper and lower wings were identical in outline, and connected by metal N-struts supported by wires. Construction was wooden for the wings and metal frame for the fuselage. The entire airframe was fabric-covered, with exception of the metal-plated front fuselage and upper wing centre section which was skinned with plywood. In short, a typical biplane product of the inter-war era! 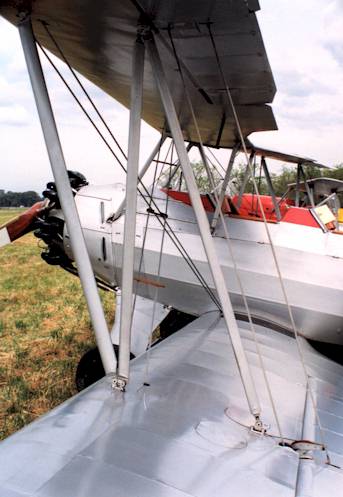 Nice view of the wing with the prominent outer N-struts

Note the two wires connecting the upper and lower ailerons. 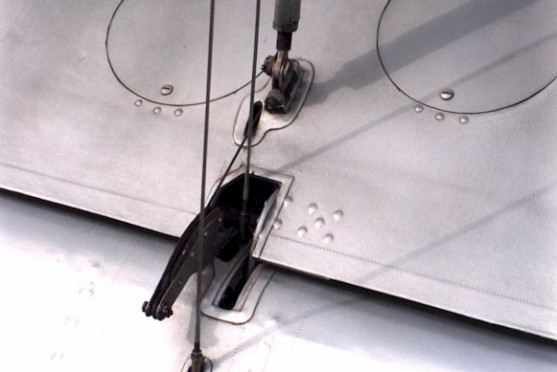 Detail of the aileron hinge and the strut attachment point. 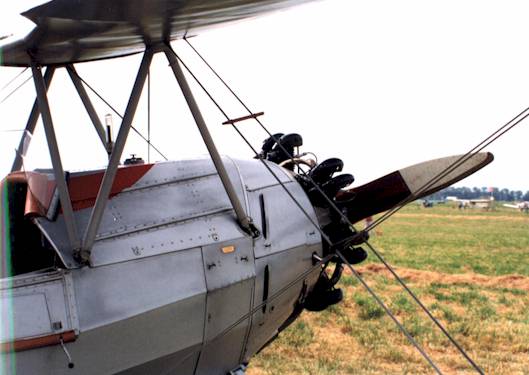 This photo offers an excellent view of the cabane struts and the forward, metal-covered section of the fuselage 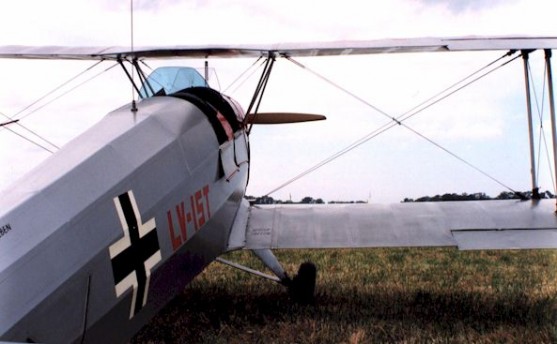 This view from the rear shows all the rigging wires on a single photo! 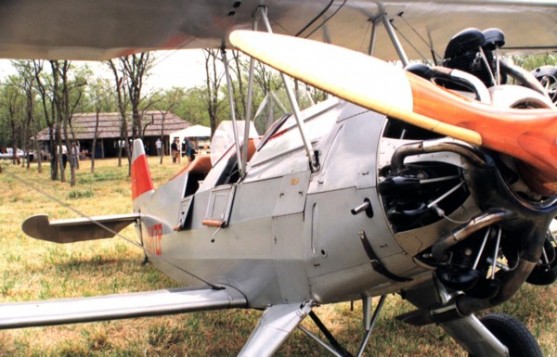 A shot from the reverse angle shows yet more details of the forward fuselage, engine and propeller. Note also cockpit access doors in open position. 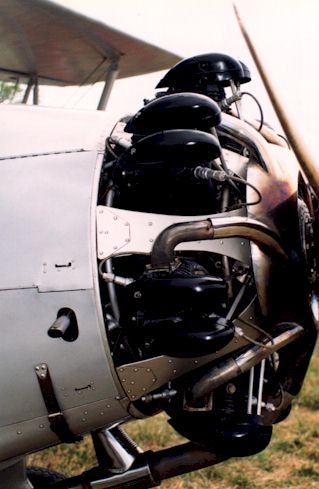 The Sh 14a engine was produced by Siemens-Flugmotorenwerk (formerly Siemens-Halske) from 1929. It was later also known under the designation Bramo 9-314. Depending on the version, the engine developed 110 to 160 HP and was a highly reliable design. 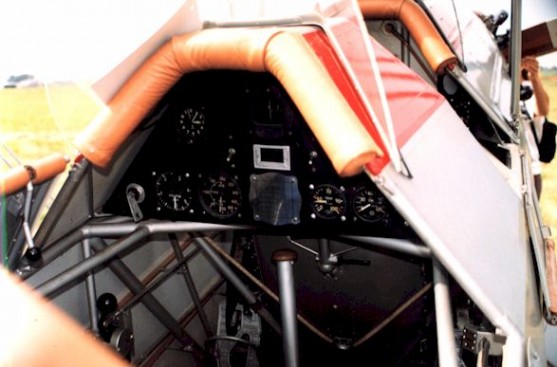 Like in most contemporary tandem aircraft, the pilot sat in the rear cockpit, shown here. The prominent cockpit rim coaming seems to be of modern variety. 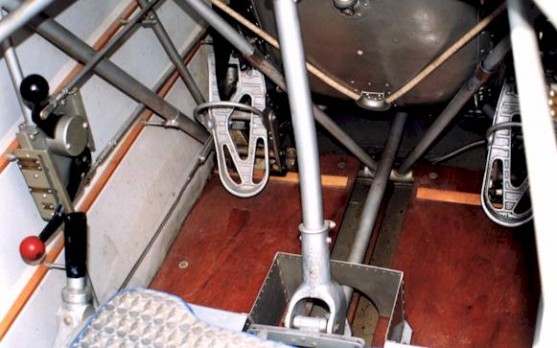 A look into the pilot’s cockpit reveals the tubular steel fuselage framework, wooden floor, and simple controls. Not that the forward seat visible between the pedals is made of sheet aluminium, and attached by means of elastic cord to provide an appropriate cushioning effect. 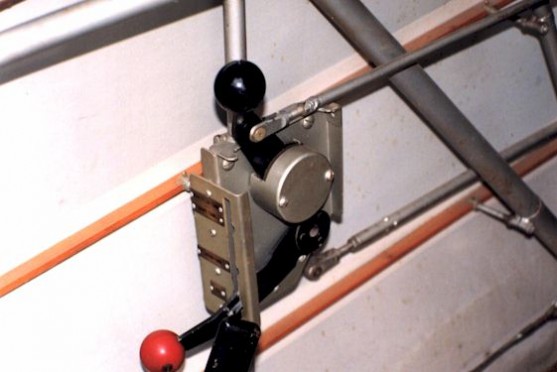 Detail of the throttle/mizture control. 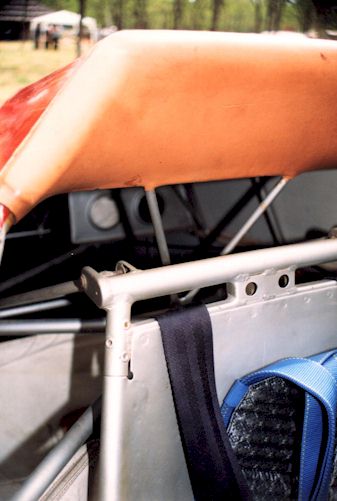 This photo shows the see-through gap behind the pilot seat. Nylon-weave seat belts and seat cushion are modern safety features. 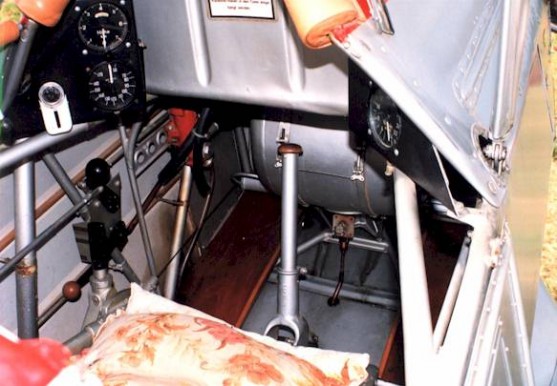 The forward cockpit has the optional dual controls, which could be ”activated” by mounting a top part of the stick and rudder pedals. As can be seen, the instrument panel ahs been limited here to a bare minimum.

Note the fuel tank protruding between the lags of the pupil/passenger .