The Hawker Hunter is a classic plane with a long and exciting history. It was designed between the close of WW II and the Korean War, the latter even hastening (and complicating) its development, in the real beginnings of the „blowtorch” era, a period when the basic features of jet fighters – many of them still valid – had to be designed. Notably of interest with the Hunter is its adaptability to different roles and hence its long service life despite the even increased pace of development.

The first prototype Hunter was aerodynamically cleaned up and reconfigured for a world speed record attempt in 1953 by installing a stronger engine with reheat, twin airbrakes and a pointed nose cone. Painted in a high gloss bright red scheme, it set a (short standing) world speed record at 709.22 mph over a 100 km course.

Basically, the Hunter was designed as an air superiority fighter. It was to be armed with the then standard four Hispano 20 mm guns, which was later changed to 30 mm Aden guns. The maiden flight of the first prototype took place on 20 July 1950, but it was only 1953 that the first production planes were introduced with RAF squadrons.

Development of the Hunter had been pressed forward under ”Super Priority” conditions following the appearance of the then superior MiG 15 jet fighter in Korea, but as it turned out, the Korean war was over before the Hunter could be deployed. As a consequence of the speed-up development, several design flaws appeared only in the production planes and had to be cured the hard way. Main problems were the very short range, a strong tendency to nose pitch-downs caused by the use of the flaps as airbrakes and several problems with the guns.

The early Hunters were retired after only five years and replaced by improved variants. The F.4 and F.5, introduced in 1955 (produced by Hawker and Armstrong-Whitworth respectively and equipped with Rolls-Royce or Armstrong powerplants) had an improved internal fuel capacity plus reinforced wings with provisions for underwing stores (fuel tanks, bombs or rockets) and the link collector blisters.

The final fighter variant was the F.6, equipped with a 10,000 lb thrust Avon engine. The higher thrust effected the necessity of several aerodynamical modifcations, outwardly most notable a redesigned wing with leading edge extensions and blast deflectors on the gun muzzles. As an interceptor, the Hunter was soon outperformed and replaced by the English Electric Lightning, which was a fully supersonic plane whereas the Hunter had to go into a dive to become supersonic.

The Hunter´s role with the RAF changed to ground attack purposes in the 1960´s. The main ground attack variant was the FGA.9 with reinforced wings until it was replaced by more advanced planes in the 70´s. Hunters were still used in various secondary roles in ever diminishing numbers well into the 80´s by the RAF and the RN plus several smaller establishments.

The Hunter was an even bigger success as an export than at home. Beginning with the Swedish Air Force in 1954, it was exported in literally dozens of countries on nearly every continent, including India, Chile and Somalia, just to mention a few of the more exotic. Several European countries license-built the Hunter at times, and Switzerland employed it as a first-line plane even far into the 90ies. Last but not least, many aerobatic teams throughout the world have used Hunter at times.

In 1954 120 Hawker Hunter Mk 50s were purchased by the Swedish Air Force. Mk 50 was the export designation for Mk 4s destined for Sweden. Swedish designation became J 34. The aircraft equipped the two wings in Stockholm, F 8 at Barkarby and F 18 at Tullinge, each of which got 60 aircraft during 1955-57.

The Hunter presented below has been preserved in Swedish Air Force museum in Linköping. 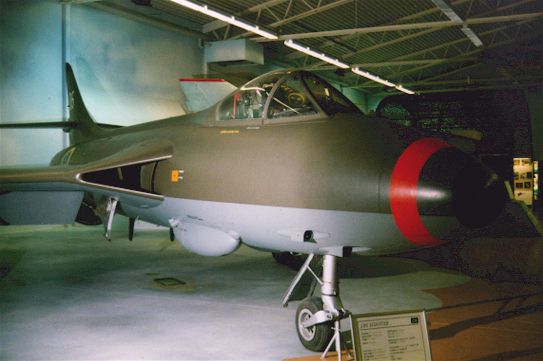 J34 on display in Linköping Swedish Air Force museum. The finish is that of Dark Green over Light Grey, typical of all Hunters in the Swedish service. 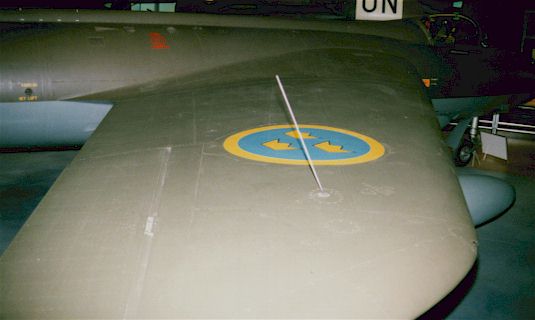 Unlike their British counterparts, the Swedish Mk.50s lacked the wing leading edge ”dogtooth”. The leading edge is completely straight from the outer end of wing root intake to the tip.

Typical for British aircraft, Hunter’s cockpit and canopy were relatively small with limited space for the pilot. Therefore an extra prominent feature of this view is the ejection seat. The type used in Hunters was Martin Baker Mk.3.

Of note is also a row of small vents behind the sliding part of the canopy. 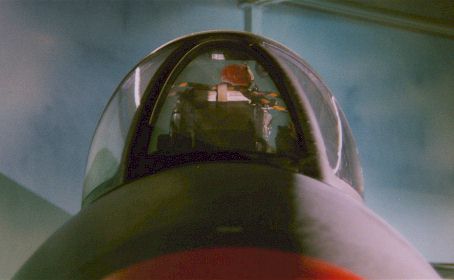 Front view of the windscreen with reflector gunsight showing through. 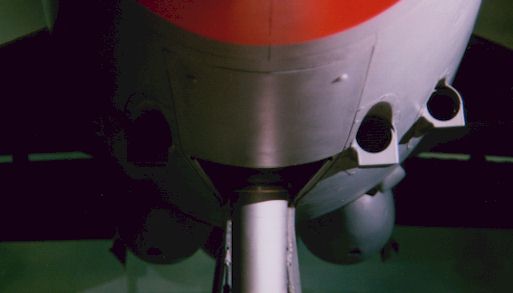 The armament of Mk.50 consisted of four 30 mm Aden cannon, concentrated in the lower part of the nose. Later the J34 could also carry two underwing missiles. 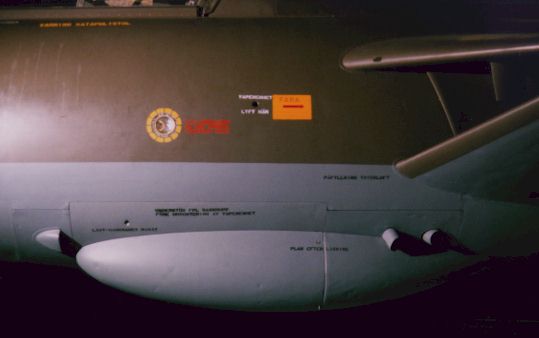 Ejection chute collector blister. Originally, it had been feared that the spent shells from the guns might damage the fuselage, but flight trials showed that it was rather the belt links that could do damage. The spent links were later collected in ventral blisters, nicknamed Sabrinas after some well-developed photo model of those days. 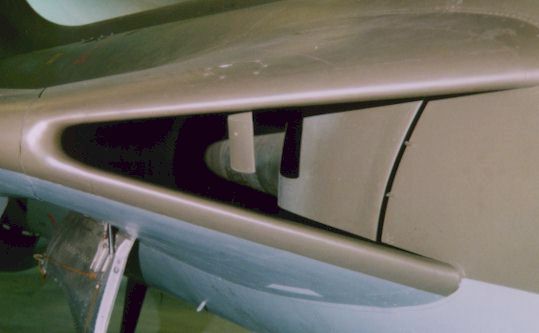 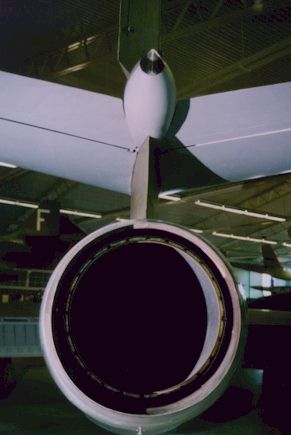 The business end of Rolls-Royce Avon.. 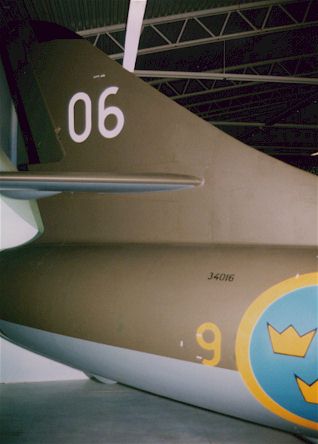 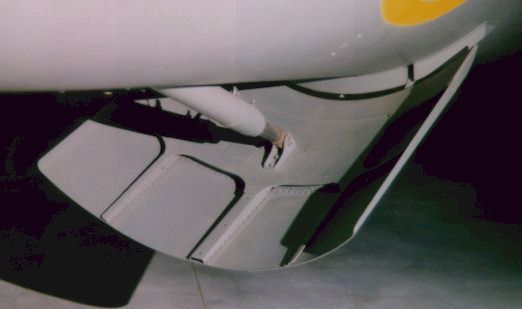 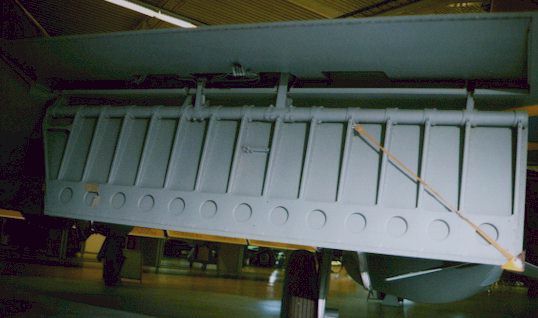 Landing flap of the starboard wing in fully lowered position. 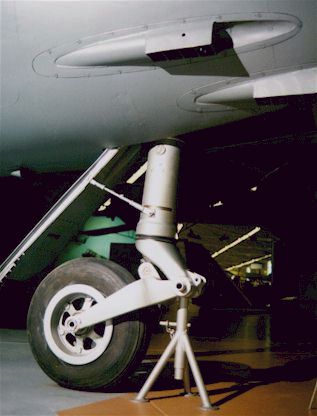 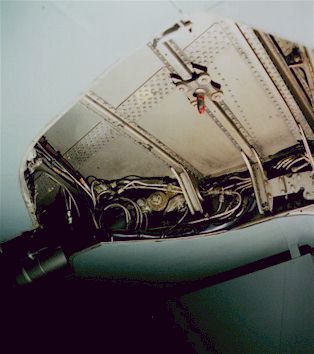 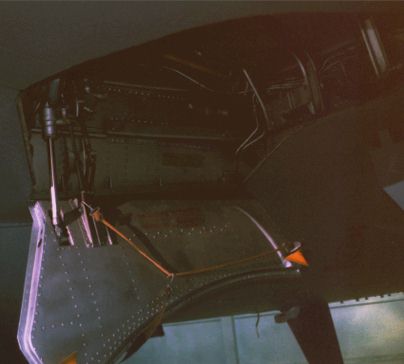 Another view of the (port) main wheel well, regrettably a poor exposure. Nevertheless it provides a good view of the inner undercarriage cover and it’s closing mechanism. 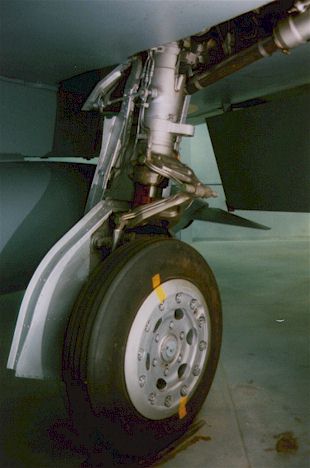 Main undercarriage leg. Of note is the ”thin” wheel, matching the depth of the wheel wells.

The Hunter has always been a thankful modelling subject, given the number of variants and their often colourful paint schemes. My second plastic model ever built was an 1/72 Airfix Hunter, molded in black which made the roundels look cool in contrast (no painting then) and with lots of external stores which I mercilessly glued under the wings, still not really understanding that there was a matter of choice involved between tanks, bombs or rockets …

The most famous new Hunter kit was presented by Revell some two years ago in 1/32 scale. Not having built it yet, I can only rely on the enthusiastic reviews I have read, and pending sufficient space, it´s a must for me. The kit depicts either an FGA. Mk 9 or the final Swiss variant, an F. Mk 58, incorporating more than 1100 modifications since the first purchase in 1958.

Summary: The Hunter is a real classic, graceful and rather clean in its construction, and I guess one should be able to produce a one-of-a-kind model using easily available references. What about a Lebanese or Somali, a Rhodesian or Kenyan Hunter, or one of the many aerobatic ones?

This article was originally published in IPMS Stockholm Magazine in October 2000.