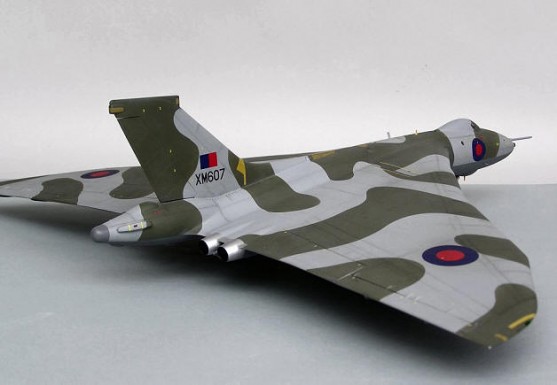 The Avro Vulcan was developed in parallel with other British bombers of the V-series and put into service in 1957. The iconic delta wing made the Vulcan to an one-of-a-kind sight in flight and gained it a nickname Tin Triangle.

When the Royal Navy took responsibility of the strategic deterrent in 1969, the Vulcans were kept flying and acted as a strategic reserve. The Vulcan was kept in front line service, and would eventually see action in the Falklands conflict.

In the seventies some aircraft were converted to perform the maritime radar reconnaissance role (MRR).

When Argentina invaded the small, desolate group of islands in the South Atlantic Ocean called Islas Malvinas in 1982, the chance for the resurrection of the Vulcan came. It was decided that bombing missions against the airport in Port Stanley was necessary and to be flown by Vulcans from Ascension way up in the Atlantic! First of all, six Vulcans were flown from Britain to Asuncion, escorted by Victor K2 tankers, each Vulcan requiring two in-flight refuelings during the flight.

On each strike mission two Vulcans were used, one as main aircraft and one as a backup and on the very first mission XM 607 were flying as the backup. As the main aircraft had to abort when a cabin window would not seal properly and the crew could not pressurize the aircraft, XM 607 took over and completed the mission. The bombs were released at 10000 feet but only one of the twenty one 1000 pound bombs hit the target. This aircraft flew one more Black Buck mission, this time releasing the bombs at 16000 feet, with no hit on the target.

This Vulcan is equipped with one ALQ-101 jamming pod and is armed with two AGM-45 Shrike anti-radar missiles.

As I am in the process of building the British air forces in the Falklands conflict the specific aircraft was easy to pick: the first Vulcan to bomb the airstrip of Port Stanley. The book Falklands, the Air War covers every individual aircraft participating in the war and describes the missions made by XM607 thoroughly.

The Airfix B.2 originates from the seventies and was released again a few years ago, so there should be no problem obtaining one and it is accurate enough to make a decent model from it. The airframe consists of a center fuselage split horizontally, upper and lower parts for outboard wing panels and forward fuselage split vertically. The detailing is not up to today’s standards; only the fin and rudder spoil the vast surface area of the delta wing, and of course miles of raised panel lines! The landing gear is very simple, but seems accurate; but the cockpit is almost nonexistent! 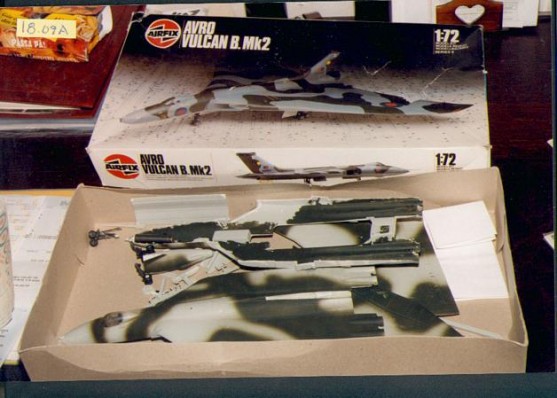 When I started this project in 1995 I could not find any kit, so a friend gave me his old already built model to try out! I started by carefully, with a razor saw, separating the whole model into its original pieces. That was fairly easy as old styrene cement makes this plastic brittle in the joins, but in the process some plastic disappeared and care had to be taken when rebuilding it. I sanded off all panel lines and scribed new after drawings and photos. The landing gear with all the wheels was a sad affair, but in the end I saved enough of all the wheels to reconstruct them and replaced the axles on the landing gears with piano wire. 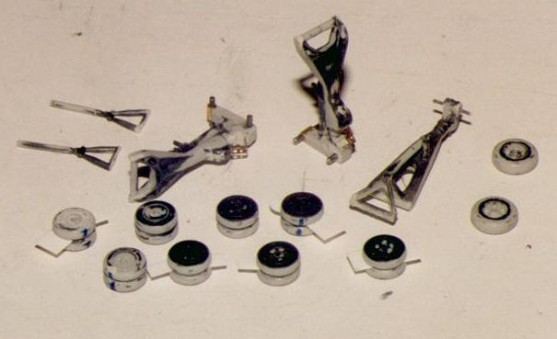 I did not make any big effort with the cockpit apart from replacing the original seats with white metal seats from Aeroclub as very little of it visible from the outside. From the lower fuselage entry hatch you are able to see the interior, so I added some interior walls and a floor, and added PP Aeropart’s delaicate access ladder. 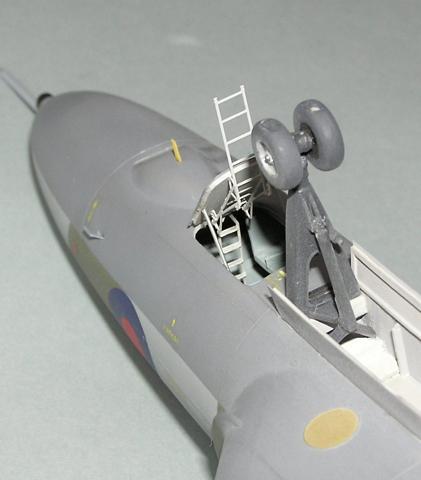 Lots of hours have been spent lining the inside on the air intakes with Plasticard to get rid of the seams and strange surfaces. 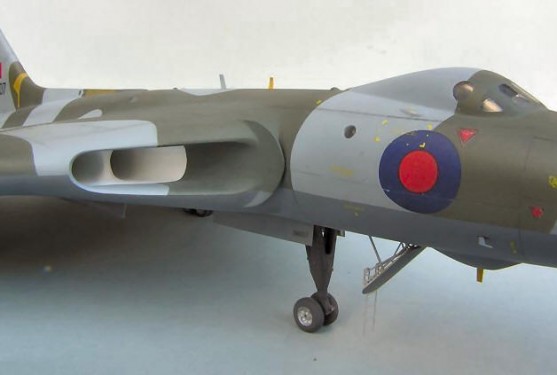 The main wheel well doors were made from thin brass plate with a Plasticard lining for the inside.

In the rear I exchanged the original exhausts with DB Resin exhausts which are better but still very simple.

As I prefer the clean lines of an airplane I build mine in “flying condition” without open hatches everywhere. With this in mind the Vulcan does not offer much in the area of detailing, I after all decided to open the bomb bay as I had some pictures and a drawing in an old magazine. 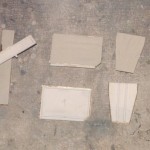 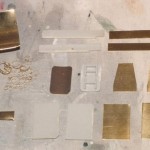 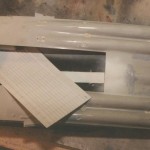 I used a large sheet of Plasticard for the upper surface, on which I attached several thin ribs at equal distances. I opened up a hole for the two bomb bay doors in the lower fuselage half, and glued the fuselage halves together. Then I inserted the bomb bay upper surface and secured it in the right position.

Now I could measure for the 13 ribs that had to be prepared individually. This operation was very rewarding and I am pleased with the result, even though I didn’t finish the work with the 21 bombs. I plan to complete them some day! 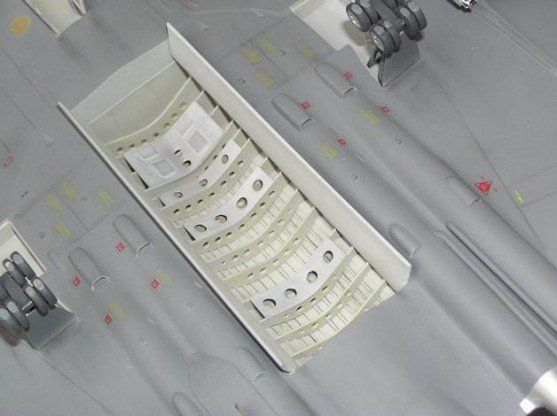 I used Xtracolor Dark Green and Medium Sea Grey for the upper side and Extra Dark Sea Grey for the lower side, white spirit and black oil color for the wash and dry pastels for the final weathering, sealed with Johnson’s Future with some Tamiya Flat Base. The decals are mainly original with some from Modeldecal’s set 71.

It was a nice experience building this old kit, and I am very pleased with the result. My Vulcan won a Commended, the Bomber Command Trophy and the British Aerospace trophy at Scale Modelworld 2003, eight years after I built it, and won it’s class in the Scottish Nationals in 2005 along with the trophy for Best British aircraft and the Airfix Trophy. It has also scored wins in Norway and Sweden. 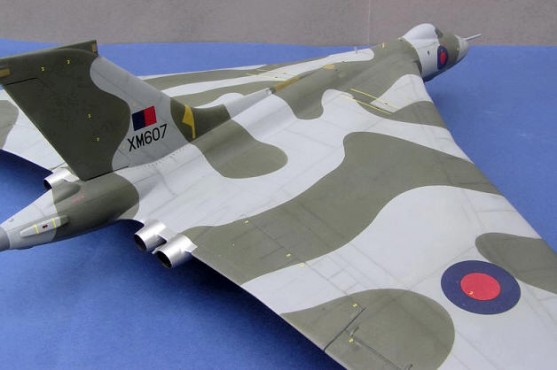 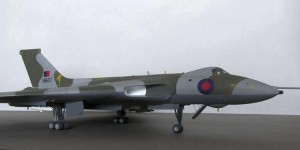 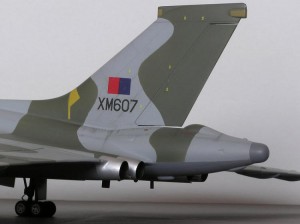 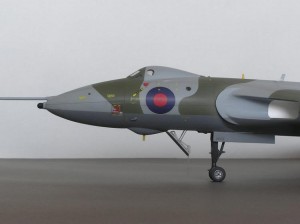 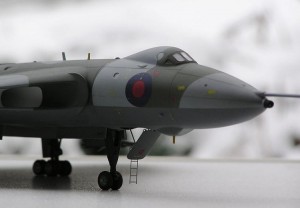