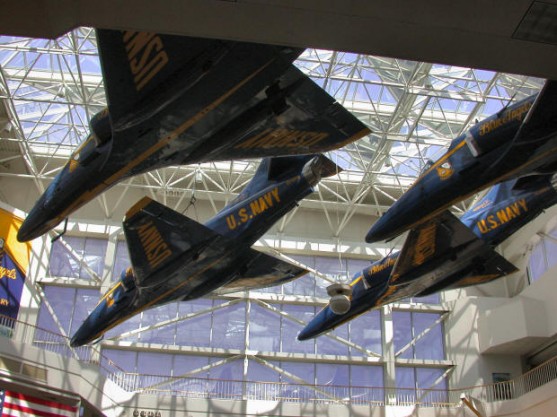 Modellers tend to put stress on priorities of their own when going on holidays. When I had the chance to see Florida this spring, I made sure I would be able to get to Pensacola in the far west of the state to see the National Museum of Naval Aviation, NMNA. Anyone interested in military or naval aviation should find this big museum a sight to see, as it documents the history of U.S. naval aviation from its beginnings to the present on a broad scale. The museum’s location right on the huge Naval Air Station Pensacola adds to the interest. NAS Pensacola is traditionally the place where US Navy aviators get their basic flight training, and it were two officers of the base who had the idea of collecting memorabilia in the first place. From humble origins in 1963, the museum has grown to its present size of 300,000 sq ft display area and a collection of 130 aircraft on display, backed by the navy and by a supportive association. And admittance is free, quite uncommon in the US! An extra treat is that Pensacola is the home of the Navy Blue Angels flight demonstrating team, and their training sessions (usually twice a week at 0830) are open to the public. I may just mention that bad weather forced the cancellation of training when we visited.

Due to several unexpected circumstances, I only had about 5 hours at the museum, but I enjoyed them and tried to take as many pictures as I could. Using the words of our friend and pilot Greg, there was just too much candy around and you simply couldn’t get it all into your system in the time given. I will try to give an overview and trust our worthy editor Martin to make a good selection of images as he always does.

First of all – getting there: Access to the museum has been changed after 9-11. The museum’s flyers and the road signs direct you to the main entrance of the Base, from where you will be turned away – friendly, but firmly. You will be handed a photocopied sheet with directions to the back entrance, a detour of about 9 miles. Driving past great beaches and the lighthouse and a Coast Guard airfield, finally you arrive at the museum. A F-14 A Tomcat and the anchor of an aircraft carrier are the gate guards. 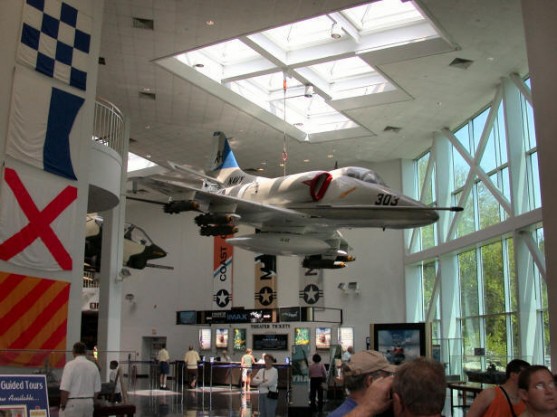 Entrance area with A-4 Skyhawk

Entering the lobby, one passes between models of all the relevant aircraft carriers, from USS Langley to the currently being built GHW Bush. Information and ticket sales for the big IMAX cinema and the flight simulator are also there. Entering the South Wing, you find yourself in between scores of aircraft, standing and hanging. The south wing houses the early and the more modern aircraft, plus the museum’s restaurant, which is a recreation of a famous pilots’ bar from NAS Cubi Point, the Philippines. There is also a section on US Prisoners of War and a Coast Guard display area. 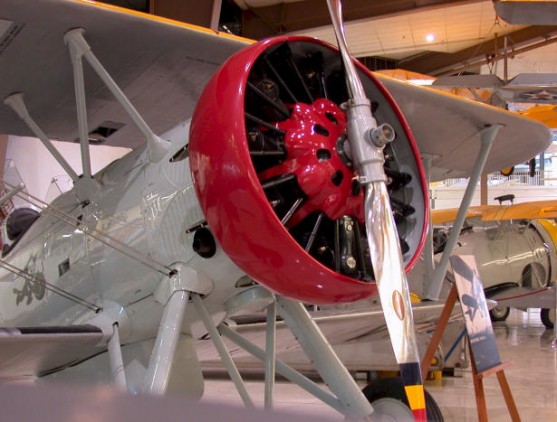 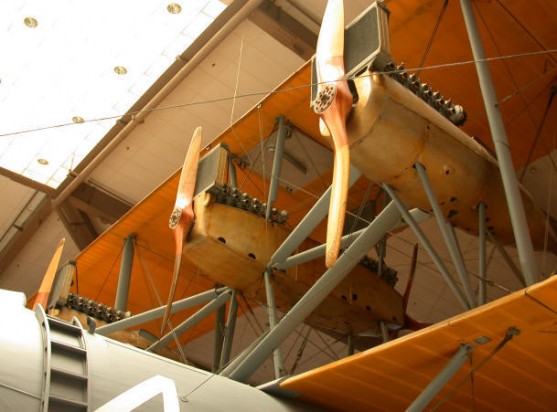 Moving on, one enters the Atrium, a big open space with an outside view. Four A-4 Skyhawks in Blue Angels livery are suspended from the ceiling, a really striking display. The place of honour outside is currently taken by the S-3 President Bush used last year for his flight to USS Abraham Lincoln. It was proudly named Navy 1 and promptly placed at the museum. When the Blue Angels training was cancelled, the pilots did an autographing session in the atrium. 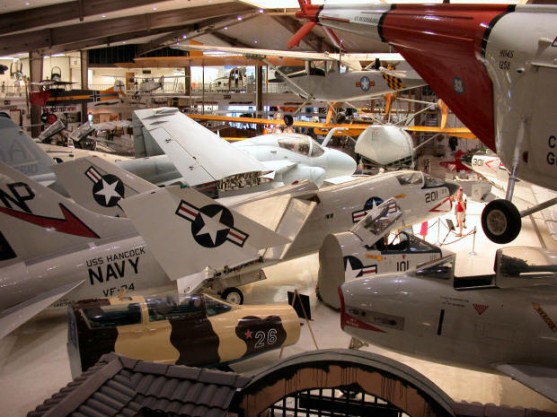 Overview of the west wing.

The West Wing’s theme display covers WW2 and Korea. Part of the space is a recreation of a light carrier’s flight deck, complete with island. Here are all the famous aircraft from that era, the Corsairs, Hellcats, Avengers, Dauntlesses and so on. Many of the museum’s aircraft have been salvaged from the bottom of the sea and painstakingly restored; a very interesting exhibition called Sunken Treasures of Lake Michigan presents some unrestored specimen, too. The USN operated training carriers on the great lakes during WW 2, and as it goes in naval aviation, quite a lot of planes went over the board in start and landing accidents. Since then, an amazing number of planes have been recovered and some restored. Close by is a small showcase with plastic models of all aircraft the museum owns, plus another one with models of the aircraft they would like to possess.

Also on the ground floor is the large museum store, where you can get all the memorabilia you might possibly want, including beautiful display models of ships and planes. I bought some T-shirts and base caps 🙂 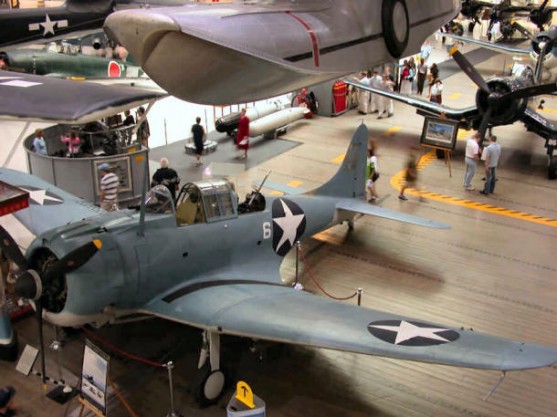 Climbing on the upper or mezzanine floor, you get a great view of the exhibited planes from above or at eye level respectively. Situated there is also the Flight adventure deck with interactive displays, a large collection of cockpits, a section for the museum’s supporters and a very nice display called Homefront 1943 depicting a small town main street during the war. There is also a section on the pacific war with a great diorama showing the rough conditions the USN and USMC fought on the islands. The next section is a very instructive recreation of a the below-deck area of a carrier, complete with hangar space, ready room and crew quarters. A stunning display on CV-6 Enterprise with a breathtaking model and a section on enlisted pilots leads to the lighter than air and to the space section. There is also the flight simulator.

The IMAX theatre shows a movie that centers on Blue Angels and has thrilling sequences, such as landing on a carrier filmed from a camera mounted under the wing of an F/A – 18. Another movie was about helicopters.

Quite many of the museum’s aircraft could not be displayed inside, so they were parked outside at the ”flight line”. Free bus tour of the flight line is available every 20 minutes or so. Next to the museum is the humble hangar where restoration workshops are situated, and adjacent to it the airfield where Blue Angels may be watched doing their magic in flight.

The aircraft collection has many highlights. Be it the many biplanes, amongst them the only left F9F Sparrowhawk, the diminutive plane used as a parasite fighter by the Navy´s airships in the early 30ies, or the many WW 2 classics, amongst them a Zero recovered from a Pacific island, the only surviving SBD Dauntless from the Battle of Midway, or a P-40 in AVG livery that was originally delivered to the British, then traded to the Soviets and crashed near Murmansk. Or the section with all the important early Navy jets, some of them reflecting design concepts developed by the Germans and tested by the Allies. And of course the classic jets, the F-4 Phantom II, the Intruder, the Corsair II. Or the helicopters, from the early HNS Hoverfly via the H-19 to the Super Cobra.

I enjoyed my visit and can only conclude with: Should you ever get to Pensacola, make sure you visit the museum!

The NMNA website www.navalaviationmuseum.org/ provides good information for visitors, plus a list of planes on display and information on special events. 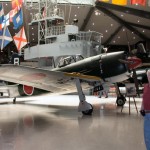 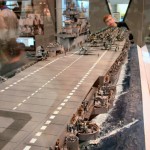 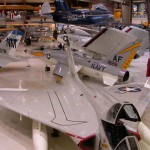 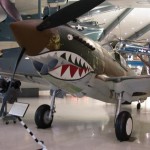