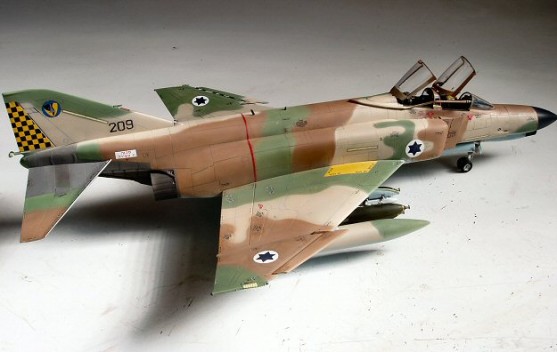 Although modern jets are not my main interest, I cannot ignore the ample opportunities to explore the home offerings by the Israeli Air Force.

About F4 Phantom in the Israeli Service

For almost 20 years, from 1960 to 1980, the McDonnell Douglas Phantom II was the top fighter of the world, against which all other combat aircraft were measured. The F-4E became the leading Phantom model, with 1,389 planes built. Compared with the earlier models, it was equipped with leading-edge manoeuvring slats, internally-mounted 20mm multibarrel gun and improved fire-control system that was optimized for dogfighting. These additions vastly improved the Phantom’s air-to-air capabilities.

The Phantom was highly regarded on the international market, with Israel being the largest foreign operator of the type.

The Israeli Air Force (IAF) expressed interest in acquiring the Phantom in 1965, when it still ranked as the most advanced service fighter in the World. The US government refused, Offering A-4 Skyhawks instead. In January 1968, after Six Days War, highest diplomatic pressure was put by the Israelis and the Americans gave a go-ahead for the sale. The ”Peace Echo” deal was signed for the provision of 44 F-4Es and 6 RF-4Es. Initially the Israelis wanted a dedicated single-seat version of the aircraft, but the idea was abandoned when it was realized that giving up the second crewman would prevent full utilization of the Phantom’s potential.

On 5th September 1969 the first quartet of Phantoms, nicknamed Kurnass (Sledgehammer) landed at Hazor IAF Base. With the War of Attrition raging along the Suez Canal, the new fighters were sent to combat almost immediately. They soon proved to be a major technological and operational leap for the IAF and with their unparalleled load capacity, long range and advanced missile weapons. 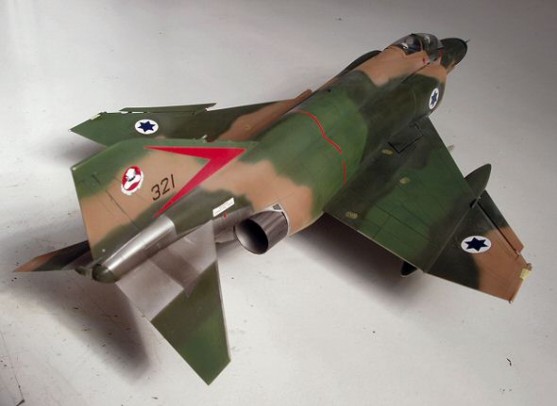 With this strength, a total of 127 Phantoms were in service with the IAF at the outbreak of the Yom-Kippur War on October 6th 1973. In the 18 days that had become known as the ”Phantom’s War”, the four F-4 squadrons bore the brunt of IAF operations, and achieved almost total aerial superiority. However, losses were also significant and in order to replenish these, yet another 36 USAF Phantoms were acquired under ”Nickel Grass”.

By 1977, the new F-15 Eagles in Israeli service had replaced the Phantom in the interceptor role and the type was now permanently shifted to attack role.

In 1980 the IAF embarked upon the initial planning phase of the project for extending service life of the aircraft. On 15 July 1987 the first prototype of the improved plane took off. It was dubbed the Kurnass 2000 and differed from the original Phantom in avionics, cockpit and radar upgrades, structural strengthening and more. Upgraded machines entered service with the Air Force in April 1989 and are still in service today. Although Kurnass 2000 look almost identical to the original F-4Es, they are practically different aircraft.

I chose three F-4Es that represent significant milestones in the history of aircraft model development in the IAF. The first is an aircraft of ”The One” squadron during 1970. It has a short cannon cover and lacks wing slats. 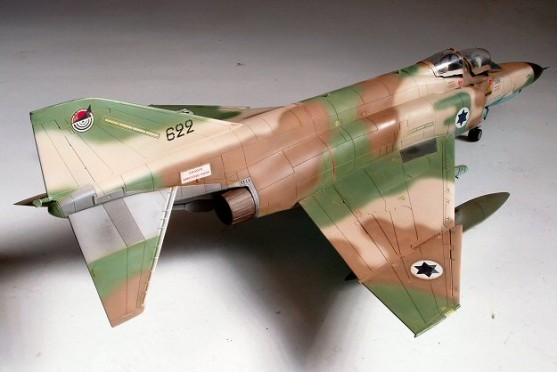 The second aircraft belongs to ”The Bat” squadron during 1973. The aircraft is painted in USAF colours and arrived during the 1973 War only to have its American national markings painted over and replaced by Israeli markings. This scheme was retained for quite a few years after the end of the war. The aircraft has wing slats, a long cannon cover and lacks formation lights. 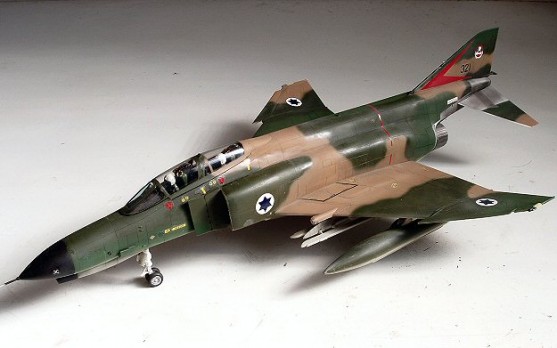 The third aircraft belongs to ”The Hammers” squadron during 1985. It has an extended fuelling rod and sports four kill markings. 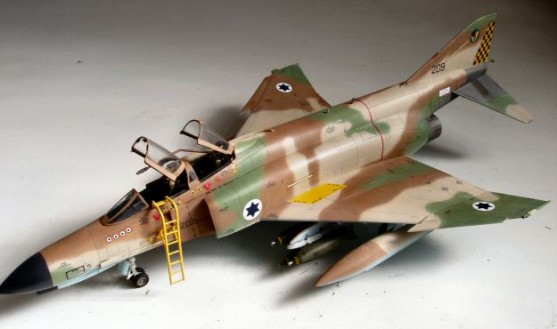 I used the Escii kit for the old F-4E and Hasegawa for the other two. The fuelling rod was scratch built and an Aires cockpit adorns the newest Phantom. Bombs and racks came from Hasegawa’s weapon kit A.

Painting was based on Humbrol enamels nos. 119, 120 and 121. These colours are spot-on with the original Israeli camouflage scheme. Other paints for the American and under surfaces were mixed and compared with references. A senior local IPMS member confirmed their accuracy. Box decals were supplemented by Sky Decals that depict squadron, Hebrew stencils for the last F-4E and national markings. I wish I could recommend the decals, but they were difficult to attach.

In all, if you have not built an Hasegawa Phantom, then this is your chance for an enjoyable modelling experience. 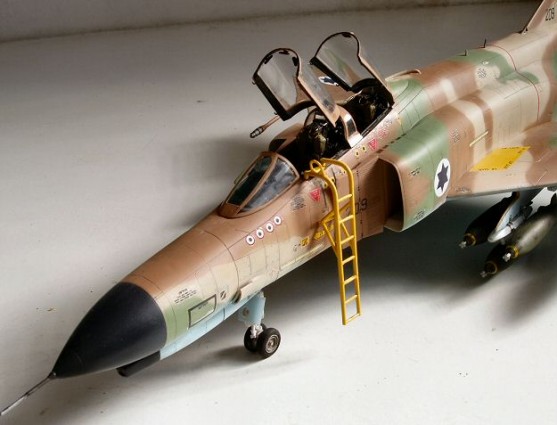