Hoppa till innehåll
Hem » Artiklar » Warhawk of the Far East

A short presentation of the P-40 diorama

This is my diorama of a Curtiss P-40E Warhawk, situated somewhere in the Far East in 1943. With its engine panels removed the aircraft receives routine maintenance from two mechanics. 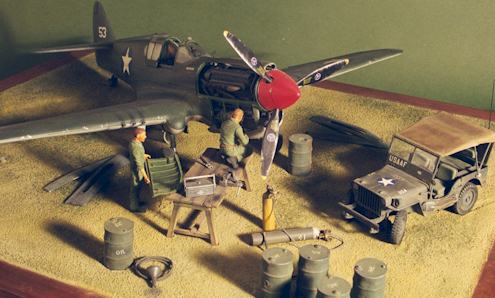 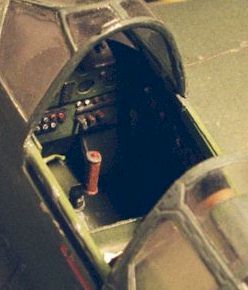 adding a new instrument panel and side wall detail from plastic sheet and rod of different sizes.

The sides of the kit seat were sanded down for a better scale appearence and it was detailed with a harness from masking tape along with Waldron photo-etched seat belts.

The engine compartment recieved a few extra details as well. Pieces of guitar string and Verlinden flexible tubing as well as lengths of stretched sprue was added to the engine. An extra panel was cut out on the lower right side and a new hatch with interior framing was scratchbuilt from plastic sheet and strips.

Although not visible in these photos the flaps were cut out and the flap wells were boxed in and detailed with sheet and strip plastic. The molded gun barrels were replaced with lengths of brass tubing, glued in place using super glue. The main landing gear struts were rebuilt using brass and plastic tubing.

Completing the rest of the kit was a bit of a struggle. A few major parts were a bit warped and the joint between the wings and fuselage produced gaps as wide as 2 to 3 millimeters! Well, my thanks go to Milliput and superglue for helping me out. I had to rescribe a few panel lines on the wings to compensate for some of the detail that was lost during the extensive filling and sanding around the wing roots.

The completed P-40 recieved a base coat of a mix of different Humbrol shades of green, resulting in a suitable olive green color. After a coat of Humbrol gloss selected markings from the kit were applied together with dry transfers from Verlinden. Everything was then sealed with Tamiya matt clear.

To weather my Warhawk I used black ink applied with a fine pen to replicate oil streaks. Humbrol aluminium was applied with a fine brush along selected panel lines and around the cockpit to simulate worn metal. I rubbed a coal pencil on a piece of coarse sanding paper and applied the powder with a brush around the gun ports and exhaust stacks. A final application of sand colored pastel dust finished the weathering process.

The base is a photo frame covered with a mix of household water-based filler and fine sand. A few foot prints as well as wheel marks were pressed into the still wet groundwork. When completely dry the entire base was painted with matt Tamiya dark yellow. Static grass was applied in random areas and painted in different shades of Humbrol green and brown. 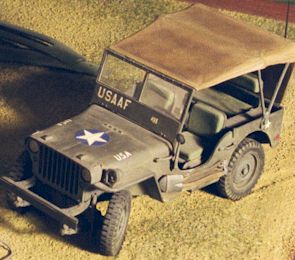 classic (when I built this diorama back in 1990 Tamiya’s old kit was the only alternative.

A few suitable markings were taken from Verlinden’s sheets of dry transfers. The USAAF-style star on top of the hood was cut out from an aircraft decal and applied using Micro Set and Sol. I have no idea wether this marking is accurate for an Air Force Jeep but I thought it looked good anyway.

The figures are taken from the Verlinden range of resin figures. The one kneeling is one of the generic mechanics (out of production) and the one standing is a german artillery crewman (also out of production) with some of the uniform details filed away and a new head added. They were painted using Humbrol colors with oil colors used for the flesh areas.

To further detail the scene I added selected items from the Italeri Field Tool Shop. The welding equipment was detailed with a few lengths of Verlinden flexible tubing. I also added a set of oil barrels from Verlinden. 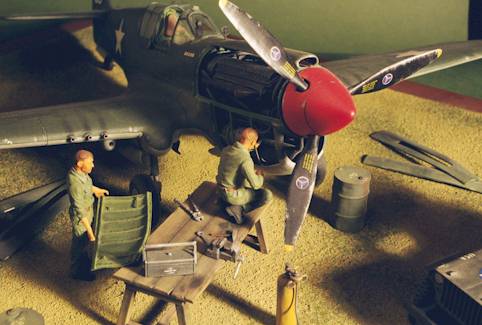