The artwork and photographs contained in this article were first published in the book ”Romanian Aeronautics in the Second World War 1941-1945” by Cristian Craciunoiu and Jean-Louis Roba, Modelism, 2004. Used here by kind permission of the publisher (Ed.) 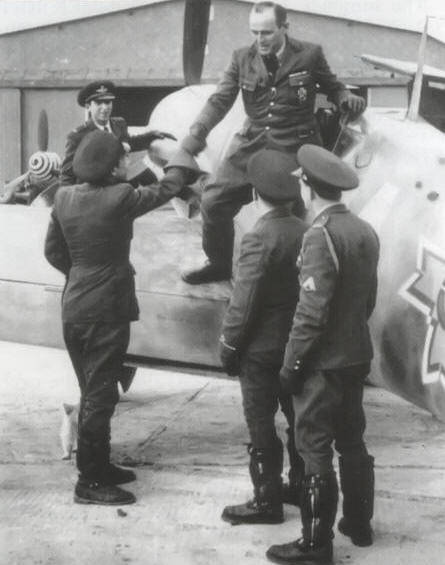 Few people know that famous World War 2 German fighter aircraft, the Messerschmitt Bf 109 was manufactured also in Romania, namely in Brasov. Also, it may come as a surprise to many that in the Romanian Air Force, these aircraft flew alongside the Hawker Hurricanes.

Romanians had also fighters of their own design, the IAR-80/81 (which by the way were often reported by the encountered American bomber crews as the Focke Wulf Fw 190s).

As far as size is concerned, Royal Romanian Air Force (FARR) was the no.3 air force of the Axis and later, starting with 24 August 1944, the no. 4 air force of the Allies. Yet its operational history has been covered for decades in almost impenetrable secrecy, unavailable to researchers and historians in Romania and abroad.

For many countries in Eastern Europe and the Balkans, the political reality of 1940 meant having to choose between the bad and the disastrous. As the French-English guarantees to the allied Balkan countries prove to be of little worth in front of Hitler’s power, the Romanian government considered itself forced to accept the alliance with Germany, in order to keep the country’s state identity.

Unknowing to the extent of Hitler’s involvement in 1940 Romania’s chop up (where about 35% of the country’s territory had been given away to the neighbouring countries: Russia, Hungary and Bulgaria), general Ion Antonescu, brought to power in September 1940, decided to adhere to the Axis. Thus he hoped at least to retake the largest of the lost territories, Bukovina and Bessarabia (amounting to roughly half of Moldova), from the Soviet Union. This had also been the main objective of Romania’s participation in the next year’s operation Barbarossa.

On June 22, 1941, Romania’s third and fourth armies, a total of thirty divisions, joined Hitler’s attack on the Soviet Union. Its forces were by far the largest and possibly the best of all the German allies on the eastern front, and included in Army Group South under the command of general Erich von Manstein.

During Russian campaign, the Romanian Air Force had a role of fighting the ground forces of the enemy and its supply lines. The Romanians fought together with the more experienced Luftwaffe, but fulfilled their role well and beyond. There were bravery and heroic acts by Romanian pilots that attracted not only the attention of public at home, but also German military authorities. Many Romanian airmen were awarded German military decorations.

The Romanian ground forces advanced with the Germans up to Odessa, Crimea and then to Stalingrad. In October 1942, they became bogged down with a German army group in front of Stalingrad. In the subsequent defeat they avoided Soviet encirclement but suffered great losses. The air force paid its tribute accordingly.

In August 1943, air war reached the Romanian soil with the first massive American bombing raid from North African airfields against the oil fields at Ploiesti. Due to the tough aerial defences put up by Romanians and Germans in the area (including massive Flak, fighters, balloons, flak train, artificial fog generators etc.) it took another 24 American raids and fierce aerial battles before Ploiesti was turned into ruins and Romanian oil production reduced to a level that seriously affected the Axis’ military capability.

In the summer of 1944 as the Red Army approached Romanian territory, Germany’s power could no longer be looked upon as a guarantee, and the depleted Romanian army could not hope to put a stand against the overwhelming Soviet forces.

On August 23rd, 1944, King Mihai I arrested Ion Antonescu, by then in the rank of a marshal. The following day, Hitler ordered 150 German bombers to attack Bucharest in an attempt to ”persuade” Romania to rejoin the war on his side. Romania then declared war on Germany, thereby entering the battle on its old Allies’ side, but also under the overwhelming Soviet rule. The Anglo-American bombing raids on Romania stopped, and the Romanian Air Force turned to fight against Germany and Hungary. The result of this second part of the war lead to recuperation of Transylvania from Hungary, the second-largest territory lost in 1940.

After the war, Romanian airmen were subjected to all kinds of repercussions by pro-Soviet communist government, being purged from the service, imprisoned, accused of treachery and espionage, forbidden to talk about the anti-Soviet war. The communist regime, of Soviet origin, put a lot of effort in hiding this page of Romanian history as unworthy and has put the pilots of that time in anonymity. Eventually their battle had been all but forgotten. This state of affairs could only be gradually restored after 1990, when the Iron Curtain disappeared. 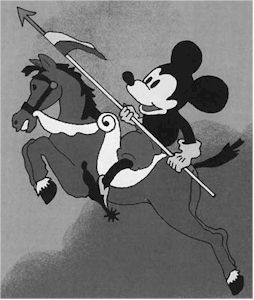 Grupul 9 adopted this Mickey Mouse emblem as their unit insignia. The emblem itself is a parody of Saint George killing the dragon. It was carried on IAR 80s and Bf 109Gs of that unit. It was also painted on lt.av. Horia Agarici’s Hurricane featured below.

Although having entered the war on Germany’s side, most Romanian pilots kept their traditional pro-American sympathies. Thus, the aircraft of the Royal Romanian Air Force (FARR) were often adorned by cartoon characters of Walt Disney: Donald Duck, Mickey Mouse, Pluto, Bambi, Pinocchio, used as personal or unit emblems. These mascots make an interesting comparison with ”true” American nose art of the period. The Romanian emblems were generally more symbolic and subtle than the artwork found on American bombers flying over Romania, dominated by images of more or less naked women.

On the eve of World War II Romania was equipped with Italian, French, Polish, German and Romanian aircraft. When war was still far from its borders, Romania managed to acquire British equipment: Bristol Blenheim bombers and then-modern fighter planes Hawker Hurricane Mk. I.

A twist of irony is that at the time when Battle of Britain raged at its height, official commisions of Britain and Germany met on a Romanian aerodrome for presentation of the Hurricane and the Messerschmitt 109 fighters to the Romanian military – still neutral at that time. According to the offcial record, all delegations behaved properly and no incidents were registered…

During the course of the war, a miscellany of captured Soviet and American aircraft types have also been put into service – one example being the B-24 Liberator!

In March 1939, Romania purchased 30 He 112Bs. The aircraft were assigned to Grupul 5, Escadrila 51 & 52. These units saw action from the first day of war, June 22nd, 1941. Flying the ”black 4”, slt.av. Teodor Moscu shot down 2 Polikarpov I-16s that day over Bulgarica. Actually, Moscu claimed three victories but the third one hadn’t been confirmed.

The Heinkels were subsequently used mainly in a ground attack role and were quite successful, but due to the lack of armour protection the rate of attrition was high. In August 1941, Escadrila 52 transferred its remaining He-112Bs to the Escadrila 51 and received IAR-80As. The 51st was assigned temporarily to home defence, but in October it was sent back to front to take part in the siege of Odessa. After Odessa’s capture on October 16th, the squadron remained there and flew tactical reconnaissance missions until July 1942, when it was brought back to Romania for aerial defense.

In early 1943, the Escadrila 51 finally converted to Bf 110s and the remaining Heinkels were relegated to advanced trainer role.

Note the Pluto emblem below the windscreen of Moscu’s aircraft.

Out of the 50 ordered Hurricanes, Romania eventually only received twelve. This aircraft, ”red 3” belonged to Escadrila 53, which in 1941 was included in the Dobruja air command. Its main mission was to defend the Constanta harbour and Cernavoda railway bridge. It also carried out bomber escort missions.

The lack of spare parts quickly became a major problem for the Romanian Hurricanes and after more IAR-80s became available in late 1942 and early 1943 they were taken out of active duty. 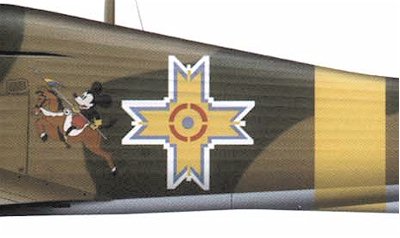 The IAR-80 was the only indigenous Romanian fighter of the era. It was an outstanding technical achievement of the Brasov works, especially considering the scarce resources at hand. The construction utilized rear fuselage and tail from the licence-built PZL P.24 and the wing of SM 79 bomber reduced in size to 50%. It proved a successful an modern design. In 1940, it was a good match for the Bf 109E, being only about 20 km/h slower and equal in climb and manoeuvrability. During the entire war, Romanian IAR-80s in all variants scored over 500 aerial victories. 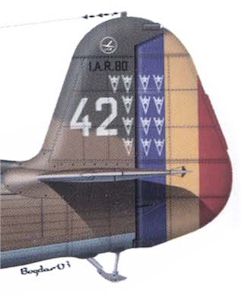 ”White 42” was flown by lt. Micu Ion during the Bessarabia liberation campaign. The white symbols on the tail denote aerial victories.

From 1942 the IAR-80 was gradually outclassed by the newest Soviet fighters. In 1943 all aircraft were relegated to home defence duties.

Romania ordered 50 Bf 109E in December 1939, of which 11 aircraft were dlivered in 1940 and the remaining 39 a year later. They equipped the newly-formed Grupul 7 Vanatoare and took part in operation Barbarossa from the very first missions.

This aircraft was mainly used by adj.av.(r) Tiberiu Vinca during the Bessarabia liberation campaign. The name Nella belonged to Vinca’s girlfriend. Another inscription Bucuresti – Moscova refers to an express train that run between Bucharest and Moscow. The 5 white stripes are a ground mission tally.

Another Bf 109E of Grupul 7 was flown by slt.av.(r) I. Dicezare and carried the name Hai Fetito (meaning a racing horse). On 18th July, 1941 this aircraft was damaged in an air battle and crash-landed near Husi.

Even the successful 1941 campaign was draining the group’s resources at a troubling pace. The group had to be replenished by 15 second-hand German Bf 109E-7s in mid-1942. It was sent back to front again just in time to join the battle of Stalingrad. The unit was surrounded by the Soviet counteroffensive and had to make a dramatic escape from encirclement, losing 8 of its aircraft. The remnants were joined with the rests of other units to form a mixed group which remained on the front until February 1943. Then the unit returned home for replenishment and later converted to Bf 109Gs.

The Bf-109G entered FARR service in March 1943. This aircraft of Grupul 9 Vanatoare belonged to the then second-best Romanian fighter ace, prince Constantin Cantacuzino (Bazu). This Bf 109 was in action against Americans on August 18th, 1944, when the unit commander and the top ace of FARR Al Serbanescu was shot down and killed by Mustangs. 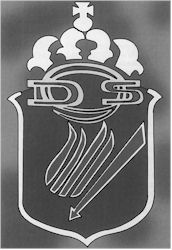 The nose insignia is the Desloch-Serbanescu coat of arms.

Only a week later, after 23 August 1944, the group was brought in to defend the capital against German air raids and scored a number of ’kills’ against Luftwaffe bombers and transports. Later on, over the front in Transylvania, Romanian Bf 109Gs met German Gustavs in combat. The unit remained in front line service until the end of the war and even managed to score a kill against a Bf-109K, the last and best model of the Messerschmitt’s fighter.

The presented aircraft, and indeed all types of planes used by the Romanian Air Force of the period are revealed in the bilingual volume Romanian Aeronautics in the Second World War by Cristian Craciunoiu and Jean-Louis Roba from which the accompanying artwork and photos are taken.

The present volume contains many previously unknown documents and photographs, of people and aircraft that have waited 60 years to appear. The text, rigorously historic, is present in Romanian and in English and describes all types of aircraft used by FARR and all the campaigns carried out in the war. It is the first such important work on the Romanian air force in WW2. 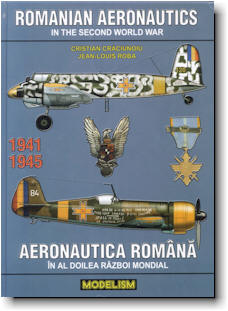 This article was originally published in IPMS Stockholms Magazine in November 2004.