This month Tomasz Gronczewski provides an in-depth colour analysis of two applications of the RLM 74/75/76 camouflage on early Focke-Wulf Fw 190s – one from the Channel front, another from the Tunisian campaign (Ed.)

Fw 190A-4 Flown by Siegfried Schnell

Both Siegfried Schnell and his Fw 190A-4 were somewhat unusual. The plane because of its oddly looking markings and its pilot because of his oddly finished career.

”Wumm” Schnell was a highly successful ace of JG 2, and a long-time commander of 9/JG 2. He flew 500 combat missions and scored 90 victories over the Channel front in 1940-1943 period. Three of the victories were scored against US heavy bombers. But in February 1944 he was posted to JG 54 fighting against Soviets, and was immediately killed by Soviet fighters having added only three kills to his credit! It was really unpleasant surprise to Jagdwaffe that such crack veteran ace fell under Soviet guns so quickly.

During his career Schnell flew Bf 109s, and scored ca. 60 kills with them, but in 1942 his Staffel switched to Fw 190s, and since then Schnell had been scoring with Würgers.

In early 1943 Siegfried Schnell was assigned with Fw-190A-4 WNr 746. This aircraft was manufactured in fall 1942 and received factory code TR+ZT. He used the plane to score his victories against USAAF bombers in spring 1943. After having finished its combat career, Fw-190A-4 WNr 756 was moved to training 4/JG 110, renumbered as blue 25 and finally lost in flying accident on October 1st 1944.

The available reference photos of Schnell’s Focke Wulf show it in quite ”unweathered” condition. Indeed, the aircraft looked like factory fresh aircraft. It carried the typical RLM 74/75/76 scheme but mottling on the sides of the fuselage was quite unusual. On the middle and rear part of fuselage the mottles were kept within narrow horizontal area and were less blurry than usually seen.

The plane carried then standard black and white crosses and swastikas, yellow ID elements, yellow 4+I, rudder victory marks and somewhat surprising unit markings. The port side was adorned with flamboyant black eagle, while the starboard cowling carried IIIrd Gruppe’s cockerel head. I believe that such asymmetric markings were fairly common in JG 2 during mid years of the war.

This port profile shows Fw-190A-4 WNr 746 carrying a distinctive black eagle badge with white outline, which was so popular within JG 2 Richthofen. Frankly I don’t know exactly if there were any rules regarding use of this badge. It could be seen on various aircraft in various periods of 1942 and 1943 within I/JG 2 and III/JG 2. Any clue appreciated…

It seems that 9/JG 2 used to paint this emblem since late 1942, on port sides of its aircraft, along with the IIIrd group badge on starboard engine cowlings. Very similar practice was popular within 8/JG 2, but that Staffel carried carried a ”hand pushing a cylinder” badge instead of the eagle design.

Yellow 4+I markings were applied with thin black outline, located in standard positions. None of the photos known to me reveals if the aircraft carried yellow nose underneath but looking at the other A-3s and A-4s of the Staffel I assumed it was the case. On the other hand, the appearance of the yellow rudder was evident on this machine.

Another intriguing detail of this Würger was a dark irregular patch around rear fuselage. I assume that it was done with RLM 02 with addition of RLM 74/75 mottling. Mr. Peter Rodeike in his excellent book suggested that the patch was done during factory codes overpainting, but it doesn’t look so. I think that it had been a result of overpainting of some colour band.

Starboard profile shows cockerel head badge on the engine cowling. Remaining elements looked exactly like those on the port side. 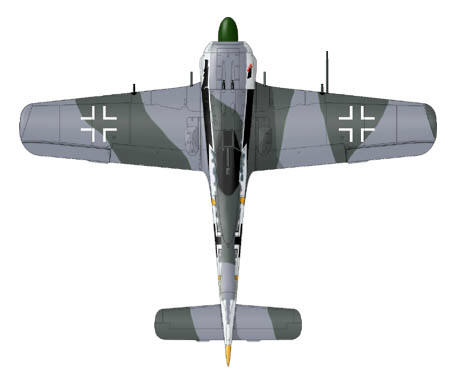 Top view is conjectural, and based on the photos of other Fw-190A-4s that had been flown by 9/JG 2 since early 1943. Note that usually black&white photos do not show correctly the contrast between RLM 74 and RLM 75. Existing, but rare colour photos have proven that these two colours were more contrasting than we used to think (as an example see articles devoted to late Luftwaffe camouflage at Hyperscale). 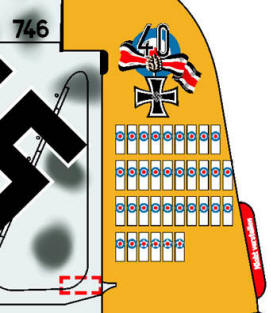 Kurt ”Bühlmann” Bühligen always wanted to be a flyer and ironically it caused that it took very long before he became fighter pilot.. He simply joined Luftwaffe before gaining any education level and was attached as a technician to JG 153 and later to KG 4 as a crew member.

In winter 1939/40 Bühligen attended pilot’s course and in June 1940 joined ErgGr/JG 2. After a few days he was moved to 2/JG 2. His first victories came during the height of Battle of Britain. On September 4th he downed an unsuspecting Hurricane and until the end of the year scored seven more kills. During 1941 he participated in Channel battles and his score rose steadily. In the meantime he was transferred from 2/JG 2 to 6/JG 2, then he became commander of 4/JG 2.

In Spring 1942 II/JG 2 started to receive its first Fw 190 fighters. Bühligen helped not only to facilitate transition, but he was sent to Rechlin to help correcting some teething problems of the aircraft.

By the end of October Kurt Bühligen had scored 30 victories, and the most brilliant period of his career was about to begin. In mid-November II/JG 2 was moved to Sicily and then to Tunisia in an attempt to regain air superiority over Africa. Between November 1942 and April 1943, the Focke Wulfs of Richthofen Geschwader managed to claim ca. 150 Allied planes destroyed. Incredibly, almost 80% of these victories was scored by the unit’s six aces, as shown in the table below.

As shown in the table, Bühligen was the leading scorer over Tunisia, and the top Fw 190 ace of the African theatre. Bühlmann’s achievement was brilliant, but the Allied opposition in the air over Africa was probably less experienced and definitely inferior in equipment compared to this over the Channel.

After the defeat of Axis forces in Africa, II/JG 2 returned to the Channel Front only to face more and more intensive American bombing raids. The American ”heavies” were extremely challenging opponents and Bühligen’s scoring ratio slowed again. By the end of 1943 he had less than 90 victories.

During spring of 1944 Thunderbolts of the 8th and 9th Air Force took heavy toll on JG 2. On March 2nd, P-47s killed JG 2’s c/o Egon Mayer, a 102 victory Experte, and on April 27 his successor Kurt Ubben, a 110 victory Experte. Bühligen took command over Richthofen Geschwader on May 1st, 1944 and his skills combined with luck allowed him to retain this rank until the end of the war.

Bühlmann as a commander did not stop fighting. On the day after D-Day he scored his 100th victory. Until the end of the war Bühligen had scored 112 kills, twenty four of them being four-engine bombers.

After war’s end, Bühligen made the biggest mistake of his fighter career. He decided to return to his home town in the Soviet Occupation Zone. He was quickly recognized as notable Luftwaffe official and spent five years in a Soviet POW camp.

In Autumn 1942 Bühligen received new this Fw 190A-4 WNr 691, which he marked with white 1+-. This is also the aircraft which followed him to Tunisia. On March 1943, this plane was lost over Kairouan, on the same day when Erich Engelbrecht was killed by Allied fighters. After the loss of his favourite mount, Bühlmann was seen in the cockpit of Fw 190A-4 white 14+-, but soon the African campaign was over.

After the return to Europe he flew various subsequent variants of the Fw 190. At the time of Normandy campaign he was flying a strangely camouflaged Fw 190A-8 with black <<-+-.

Bühligen’s Fw 190A-4 white 1+- had been manufactured by Arado Werke in Warnemünde and registered under factory code GF+OA. It had received also Werk Numer 681. Note that this machine was a lightened version of A-4 that had both outboard MG-FF guns completely removed. Even the underwing bulges were not present on this aircraft.

In Autumn 1942 II/JG 2 was moved to Sicily and then to Tunisia. Bühligen took his A-4 with him. There the markings were augmented with the white theatre bands. The band on the rear fuselage was sloped and running along the panel line separating the tail section from the fuselage. Underwing markings were non-standard, because they consisted of white bands instead of more usual white wing tips. The spinner received white tip as well.

I don’t know exactly when the change was made, but in Tunisia this Focke Wulf had fuselage crosses grayed out. According to existing photos it seems that entire Balkenkreuzen received a thin overspray of RLM 75 or perhaps RLM 02.

Overall the aircraft was only moderately weathered, sans the black areas around exhaust which displayed extensive paint chipping. 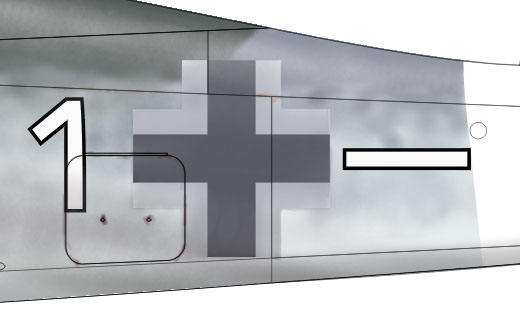 This picture shows how the cross had been grayed out. Also note that ”1” and a bar had usual black outline, but the shape of ”1” is a bit unusual. The arm was fairly long and back contour line was a little curved. 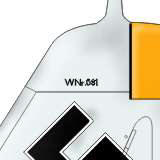 Serial number 681 written as ”W Nr. 681” was applied by hand, and was carried only on the port side of the stabilizer. The location and style was typical for Arado-manufactured aircraft. Also note that the swastika was surrounded by white outline with thin black trim.

A contrast of this picture has been very much exaggerated, but this form shows better how the underwing bands were located. They were painted from the trailing edges to the line just below leading edges. Thus the bands did not reach upper colours.

Starboard profile does not reveal any surprise. The only difference was the lack of serial number on the stabilizer. Red cross on the first aid door near the cross as well as yellow triangles with fuel grade were barely visible. They were either dirty or simply covered by side mottling. 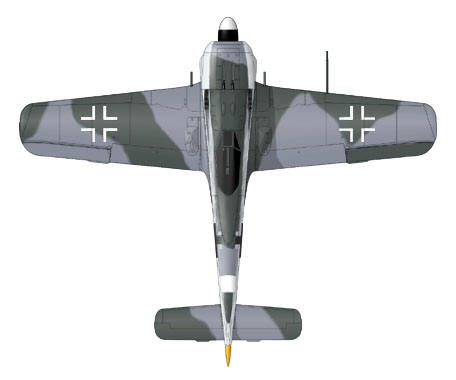 Upper view. Well… this one is tricky. I know only one photo showing upper surface of the starboard wing of the aircraft at which Bühligen was sitting at the beginning of Tunisian campaign. If it was WNr.681, then its camouflage should look like that.

Upper colours were sprayed without masks and thus colour division was fairly soft. But the most controversial issue of this view is the colour of right aileron. I approached the photo several times in order to determine if its darker colour had been caused by paint or it had been simply a result of a shadow. But the aileron was not repositioned at the time of taking photo, and now I am 95% sure that it had been painted with RLM 74.

There were some other Fw 190A-4s in other Gruppen of JG 2 which carried this confusing scheme. The purpose of such scheme seems to be obvious – just to fool chasing enemy that this aircraft is rolling counter clockwise at the moment. 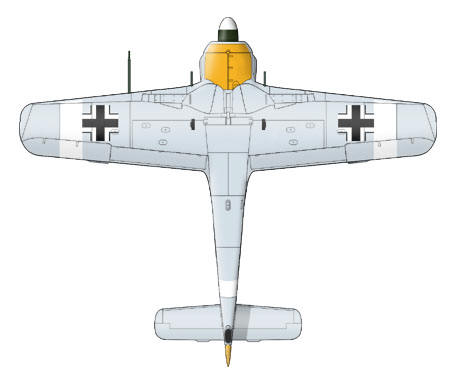 This article was originally published in IPMS Stockholms Magazine in August 2004.