Do you remember the Swordfish-marked J-35 Draken from the March Issue of our Magazine? Here is another of ”the last”. Mats Lindegren built and detailed this model from the Hasegawa kit.

The model represents a J-35 J ser.no. 35586 serving with F10 wing. The featured paint scheme was applied around 1992. This machine was a personal solo display aircraft of Capt. Ingemar Axelsson, in which he performed on a number of airshows between 1991 and 1993. However, for the 1993 season the aircraft was re-painted light grey.

35586 took part in the last operational sortie of the Drakens in service with the Swedish Air Force, together with no. 40 of the same wing. Perhaps only a coincidence, but adding the individual numbers of the two aircraft (40+62) gives 102, and 102nd Squadron wast the very last to use the J-35. 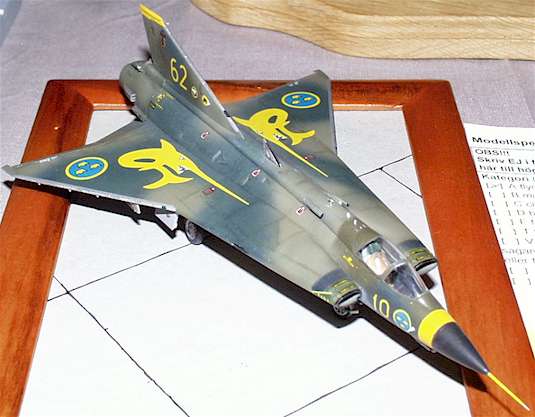 Mats used the Hasegawa 1/72 kit as a basis for this model. Extra details were added on the way: the ejection seat was replaced by a resin one from Bulgy Bits. A wealth of other extra details originate from Eduard’s photoetched sheet no. 72-180.

Draken’s flaps always tended to fall down on the parked aircraft due to the sinking hydraulic pressure. Mats cut off the kit’s flaps and repositioned them, giving the model a more life-like appearance. The brake chute covers at the rear of the fuselage were scratch-built. Even the undercarriage was modified and superdetailed.

The decals are a mixture of the ones coming with the kit and a 3rd party sheet from Flying Colors. The prominent yellow ring on the nose is also a decal, cut out from Xtradecal’s solid yellow sheet. This one required a bit of tinkering!