Roy Chadwick, chief designer of A.V. Roe, knew form the start that they had a winner. ”Oh boy, oh boy… what an aeroplane! What a piece of aeroplane!” was reportedly his comment while observing the first flight of a prototype Lancaster in January 1941.

The first Royal Air Force squadron to re-equip with the Lancaster was No. 44 Squadron based at Waddington in December 1941. The first Lancaster offensive sortie was made against Essen on the night of March 10/11, 1942

Roy Chadwick was right in his judgement. The Lancaster was undoubtedly one of the best, perhaps maybe the best of the heavy bombers used by the allies during the war, all factors counted. Rugged and reliable. A workhorse being able to carry larger bomb loads than any other bomber used in Europe. And also a pilot’s aircraft, pleasant to fly with no handling peculiarities so common to most of the other aircraft of the period. This single aircraft made possible the escalation of the night bomber offensive over Germany, and was, according to Sir Arthur Harris, Chief of Bomber Command, the ”greatest single factor in winning the war”.

The accepted number of total Lancasters produced is 7374. Of this total, 3932 aircraft were lost on operations, representing over 20 thousand aircrew either killed, captured or injured.

It is now over half the century since the Lancaster last flew operationally. The last RAF machines where withdrawn in 1956. The last users, Canadian, French Navy and Argentinean air forces retired their last Lancasters in 1964. Today about 20 identifiable airframes are known to exist in the world. Of these only two, The Battle of Britain Memorial Flight’s PA474 and the Canadian Warplane Heritage FM213 continue to fly. The remainder are by and large persevered in various locations throughout the world.

The following pictures where taken at RAF Hendon Museum. I apologise for not including the overall view of the machine, but the aircraft was simply too big to be shot with the on-camera flash in a dark surrounding. The presented machine is R5868 PO*S, nicknamed Devils of the Air, of no. 467 Bomber Squadron. The aircraft has distinguished itself by being one of the few ”Centurion” Lancasters, having flown more than 100 successful operations (in fact 136). The same aircraft flew with 83 Squadron as OL-Q during the first half of it’s career. 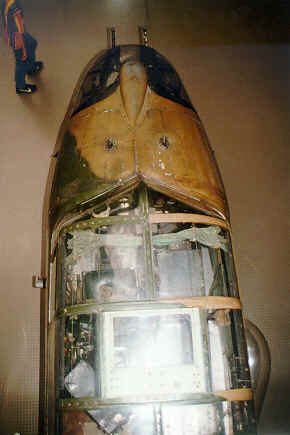 There is also another Lancaster that I utilised for this photo essay, and we start our walk-around with it. This is Imperial War Museum’s preserved nose section of the Lanc. Note that it still carries the original wartime camouflage, including the wear and tear to the paint!

This view shows the nose seen directly from above. There is a flat hatch on the top of the canopy with heavier framing placed inside of the glazing. Of note is also a rolled-up fabric sun cover visible just behind the forward frame. 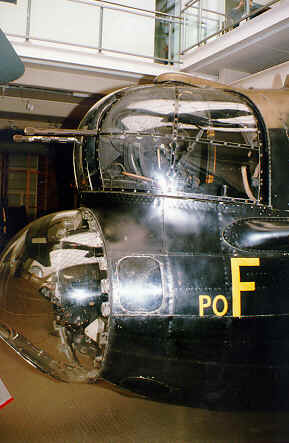 The nose of the same machine, showing the front Frazer-Nash FN-5 gun turret.

The blister below provided a bombardier with downward vision. This blister is of later production model, being larger and with a more pronounced curve. 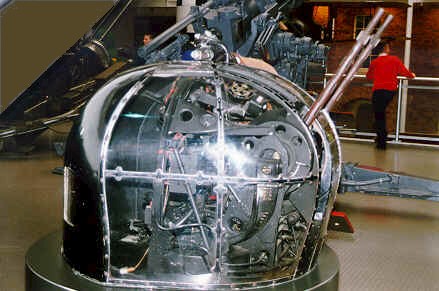 Another view of the front turret, this time extracted from the airframe, allowing internal detail to be seen. The turret was power-operated and featured two Browning 0.303 calibre machine guns. 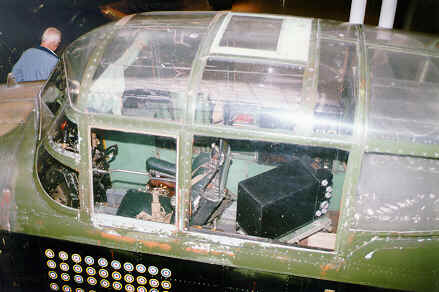 A peek inside pilot’s compartment through open side window . The interior is painted Interior Green with instrument panel and radio equipment painted black. 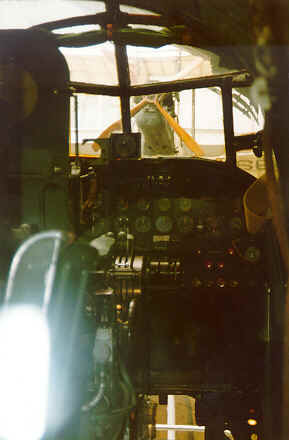 Also visible is the instrument panel with standard RAF layout and the throttle quadrant. 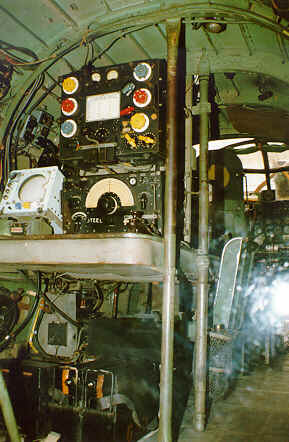 The two compartments behind the pilot was occupied by the navigator and radio operator. The radio compartment is at the front, with navigator’s seat visible just behind the two supporting pillars. 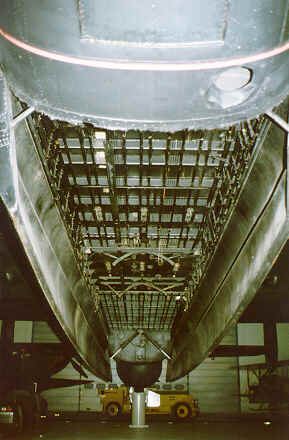 Leaving off Imperial War Museum’s pieces of the Lanc, this and the following pictures show Hendon’s Devils of the Air.

The bomb bay of the Lancaster was simply huge, compared to the other aircraft of the period. This is a view of the entire bay looking aft. Note plenty of structural detail at the bay’s roof and the smooth inner surface of the bomb doors.

The round object visible between the rear end of the bomb doors is the radar cover. 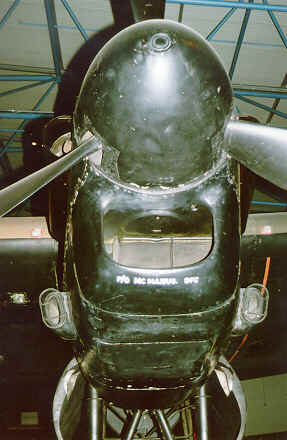 This is an inboard engine of the port wing. The view shows the shape of the propeller spinner and cooler air intake. Two smaller scoops for carburettor air can be seen at both sides of the nacelle. 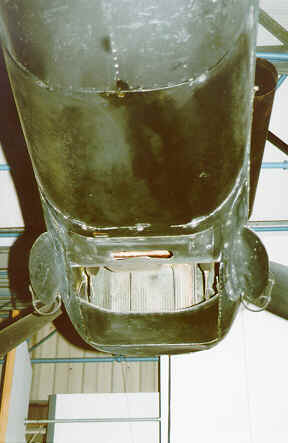 The same nacelle photographed from below. More details of the cooler can be seen. 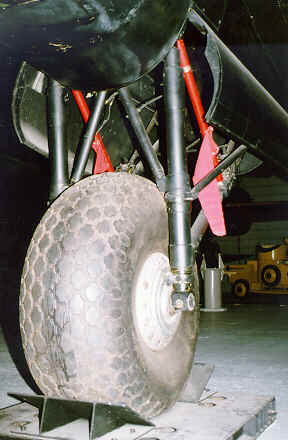 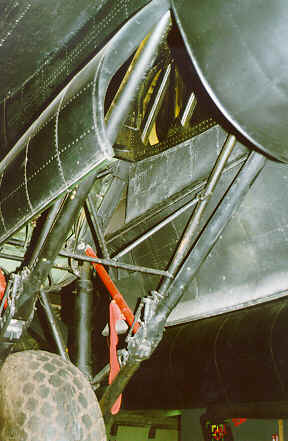 More internal detail of the wheel well can be seen on this picture, taken from the aft of the inboard nacelle. 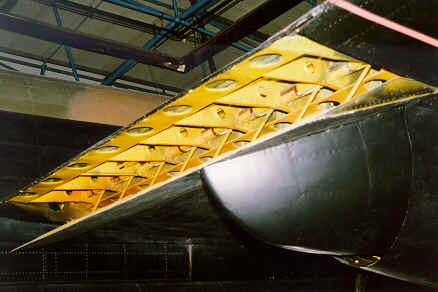 The partially open landing flap reveals the prominent rib detail. Note how the rear end of the inboard nacelle is hinged to follow the flap’s movement. 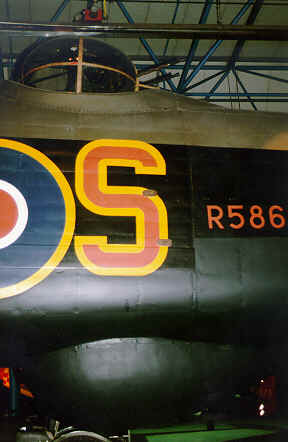 The rear section of the fuselage, just aft of bomb bay. On the top there is a dorsal Frazer-Nash FN-50 turret, it’s base surrounded by an aerodynamic fairing.

Below the fuselage there is a large teardrop blister housing H2S radar antennae. 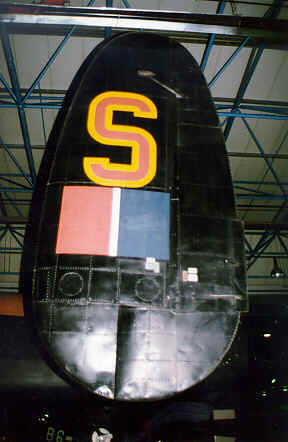 The port vertical stabiliser. Note the mass balance just above the ”S” insignia. 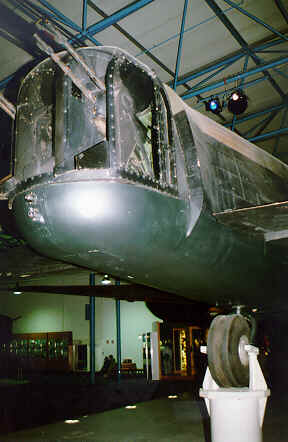 The aircraft’s tail. The rear turret featured an extra armament of four 0.303 calibre machine guns. Shell ejection chutes where a distinct feature of the rear turret and can be seen just below the gun barrels.

The turret was protected from the slipstream by means of the deflecting fairing, the rear edge of which can be seen ending the side of the fuselage. 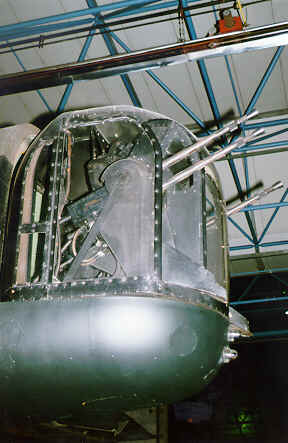 A close-up on the rear turret, showing the internal structure of the mount for quadruple Browning guns.

This article was originally published in IPMS Stockholm Magazine in January 1998.