Despite being one of the icons of post-war civilian aviation, the large, fabric-covered An-2 biplane remains firmly rooted in the 1920s.

The An-2 was designed by Oleg Antonov as an agricultural aircraft for the post-war Soviet rural economy. The requirement was issued by the Ministry of Agriculture and Forestry in May 1946 to design an aircraft to replace the the aging Polikarpov Po-2. It was the first task assigned to the newly formed formed Antonov OKB.

The prototype, carrying a designation SKh-1was first flown in August 1947. After successful trials, series production commenced in 1949. About 5000 aircraft were produced in the Soviet Union during the 1950s. It had more than proved its worth not only in as crop-spraying aircraft, but also as paratroop transport, glider tug, navigation trainer, and utility transport.

In 1960, only after the bulk of the production had ended in the country of origin, the production was transferred to PZL in Poland. It were the Poles that eventually made the An-2 to an aviation icon that we know today, turning out a whopping 11 650 additional aircraft between 1960 and 1989. It became the most numerous export product in the history of Polish aviation industry. 80% of the production went to Soviet Union, with the rest provided to Albania, Afghanistan, Bulgaria, Czechoslovakia, China, East Germany, Yugoslavia, North Korea, Rumania, Tanzania, Vietnam, Cuba and Hungary. An-2 was also produced in smaller numbers in East Germany and China.

The appearance of this biplane in 1947 was widely misread. Western intelligence deemed the An-2 as an obsolete airframe unsuitable for modern large-scale production. The reality proved them too judgemental. Undisturbed by what others might think of its looks, Antonov delivered the smallest, lightest and most efficient solution to the task at hand. The subsequent outstanding success of the An-2 can be attributed to the many virtues of his design: extremely safe (if heavy) flying characteristics, STOL, high reliability in the field, low maintenance costs and the capacious single-bay fuselage with good cargo capacity.

Looking at this hulk of a biplane is interesting in many ways. 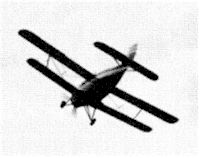 What especially catches attention are all those industry-size rivets popping out of the massive hunks of surface – bringing to mind those old Airfix kits. Also, when you see how some gallons of seeping oil have done a magnificent work of post-shadowing the already comparatively gaping panel lines. It’s a massive piece of engineering in any respect!

Frank Spahr and I have taken these photographs independently in two different locations on three different occasions. The over 30 images have been divided into three sections below to facilitate faster downloads.

Your trusty webmaster warms up hopping in front of the An-2 on display at the Army Museum in Warsaw on a cold Autumn afternon. There could hardly be any better place to shoot a walkaround of an An-2 than Poland. The bulk of its long production run was made by WSK Mielec. Many of the produced machines were, and indeed still are used by the Polish Air Force as unit hacks, light transports, parachute training or special duty aircraft. One retired Polish Air Force example is being shown here.

Configuration-wise, the An-2 still holds the record as the World’s largest single engine biplane. I don’t know of any other similar aircraft ever produced. Noorduyn Noresman and DHC Beaver come to mind, both originating in the same time frame and out of a similar need. However, these aircraft were monoplanes, and much smaller. 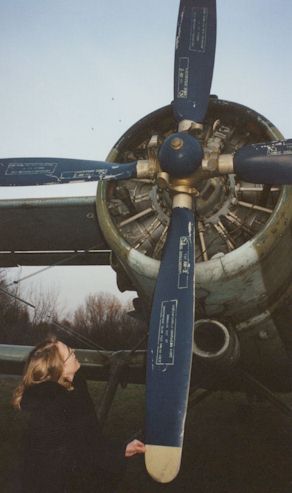 The engine of the An-2 is a 1000-horsepower single-row nine-cylinder radial Shvetsov ASh-62, driving a four-blade propeller.

The engine has a history on its own. It is in fact a direct descendant of the Wright R-1820 Cyclone, which has been licensed and produced by the Soviet Union in the 1930s to power the Polikarpov I-15 and I-16 fighters. As such, it always ranked as one of the world’s most durable aircraft engines.  A rudimentary circular oil cooler is provided below the cowling. 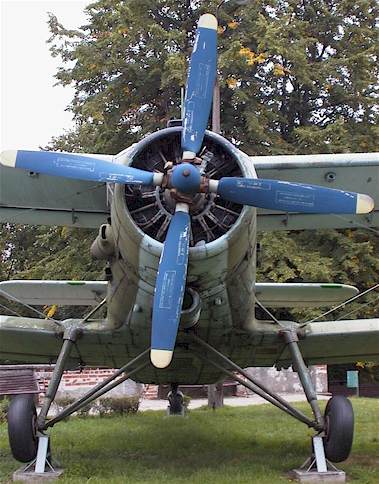 The same aircraft in full daylight showing what’s visible inside the cowling from the distance. This view also shows that the propeller is painted in a rather vivid blue colour. 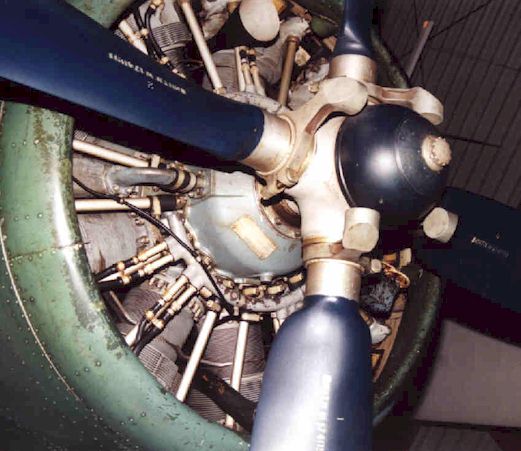 Close-up of the engine shows details of the nine-cylinder radial and the propeller hub with its characteristic pitch control mechanism. 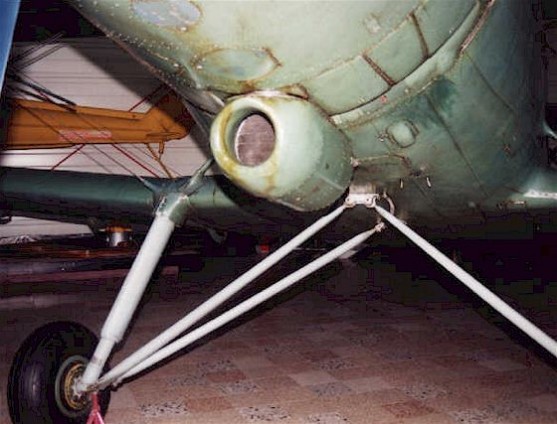 Lower forward fuselage of another An-2 from one of the German air museums shows an oil cooler of a different type.

Even though the majority of An-2 were produced in Poland, the standards of manufacturing seemed to have closely followed Soviet industrial practice in that aircraft modifications on the production line were not seen as justifying change of model designations. Therefore, one can expect to find numerous small differences between An-2 airframes of different production series. 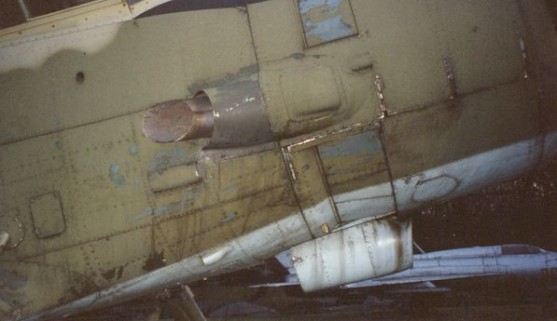 The engine has an exhaust collector ring placed behind the row of cylinders with a single exhaust pipe going out on the starboard side of the cowling. Very visible oil leaks on the entire lower forward fuselage area are another signs of the 1930s ancestry of the engine. 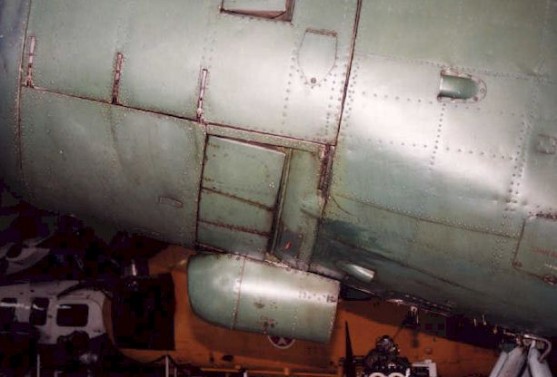 Close-up of the lower cowling showing its fasteners and the additional air scoops and access hatches in this area. 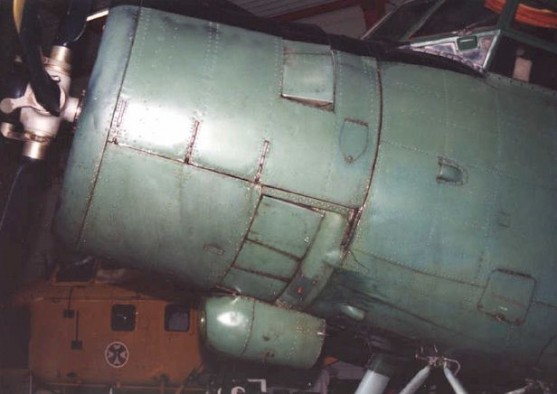 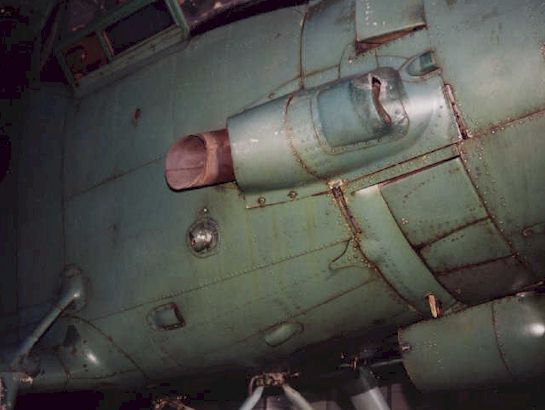 More scoops and vents of the lower right cowling. Note how the engine oil formed a brown residue collecting along and emphasizing major panel division lines. 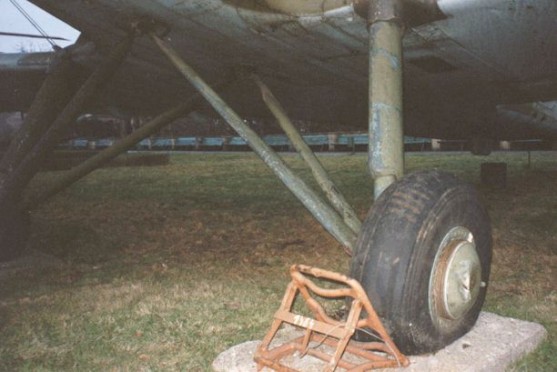 The main undercarriage shown here is a conventional 3-strut unit. 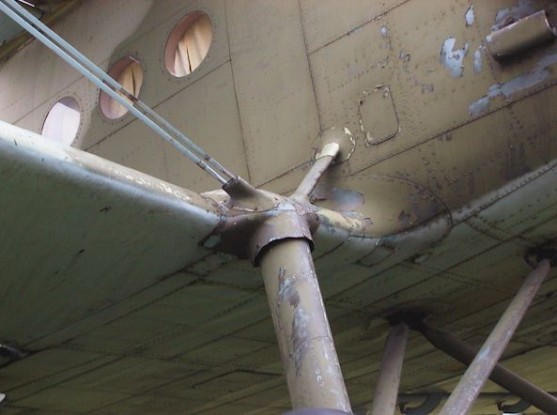 Close-up of the complex undercarriage attachment point. The small supporting strut at the lower wing root. and faired attachment points of wing rigging are details worth noting. 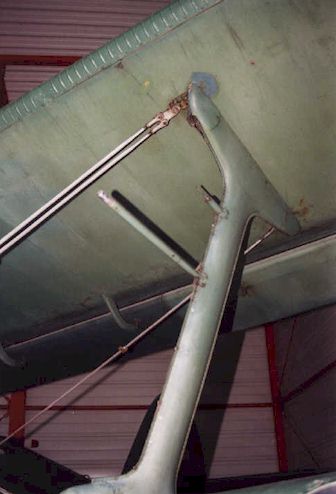 The other end of the rigging wires at the upper end of the outer wing strut. Shown to advantage is the wire attachment point. The pitot tube and another smaller probe visible here are located on port wing strut only. 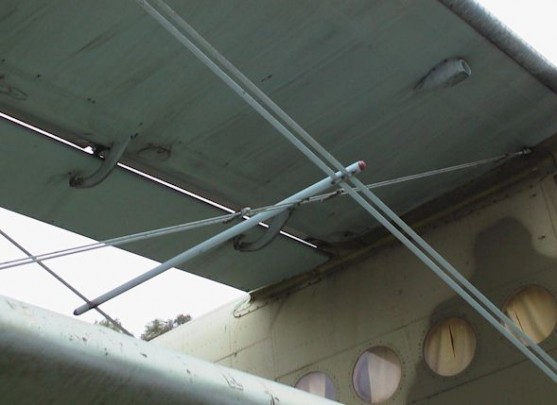 All cross-bracing wires are entirely flat in cross-section. The forward wires are doubled. 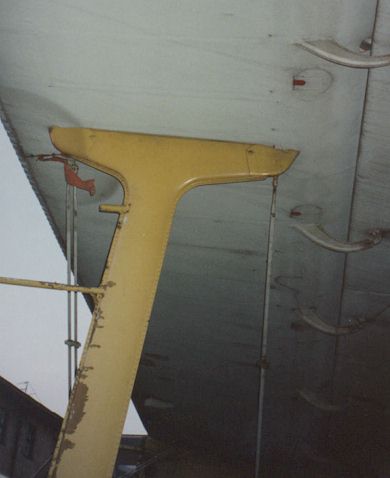 Unlike the overall feeling of the aircraft, construction of the wing struts witnesses about the An-2 being a post-war airframe. The struts are of monocoque construction made of pressed alloy formers. 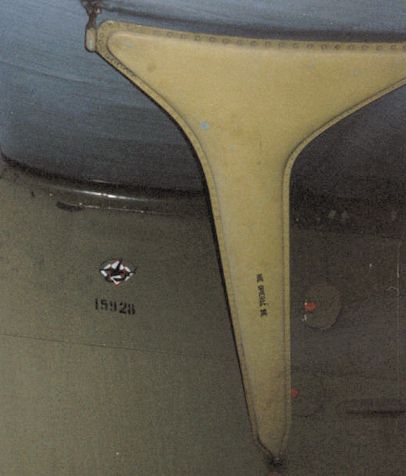 Another monocoque triangular strut supports the horizontal tailplane. This one is on the port side, with direction of flight to the left of the photo.

The wings are covered in fabric except the upper wing centre, which is covered with corrugated metal skin forward of the rear spar.

The metal skin of the upper wing wraps around its leading edge, resulting in these prominent corrugations. 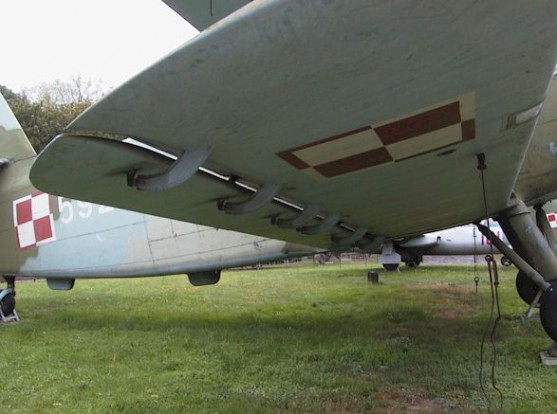 View of the lower starboard wing showing aileron configuration with its prominent hinges. Moveable control surfaces cover the entire span of both upper and lower wings, a visual sign of good slow-speed characteristics for which the An-2 is well-known. On take-off and landing, the ailerons can drop 20 degrees to compliment the flaps as high-lift devices. 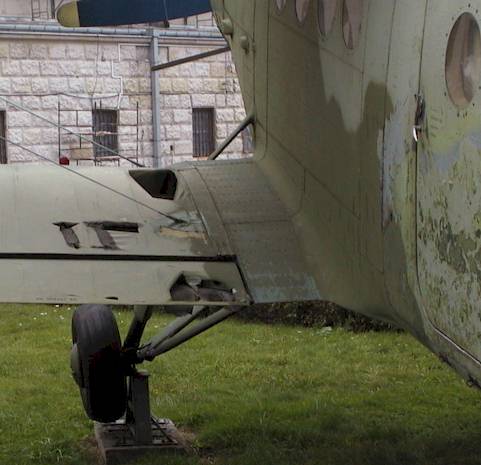 Lower wing root features a reinforced walk area. Damaged wing fabric is a sad testimony to a deteriorating state the airframe which is stored exposed to the elements in the gardens of Warsaw’s museum. 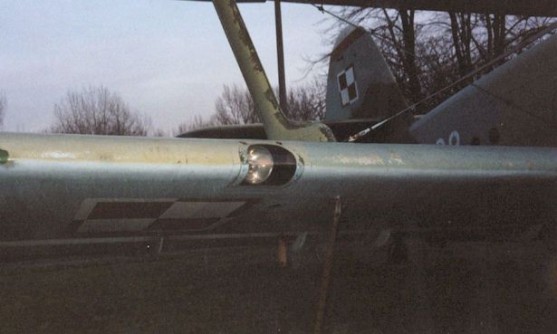 This photo shows the landing light in the lower starboard wing outboard of the wing strut. Another two identical lights reside in the similar position on the port wing . 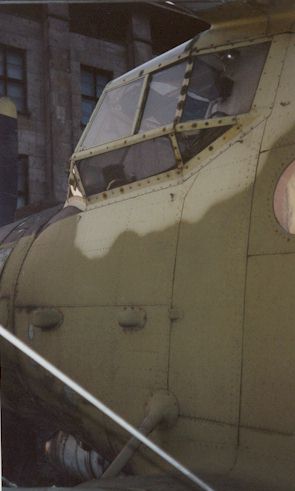 The cockpit windscreen really sits too high on the fuselage to allow photographing it from any decent angle, but I took this photo to show the principle of its construction. I can’t help thinking that it was inspired by German way of building glasshouse canopies from flat clear panels – á la Junkers Ju 52. True or not, the protruding side windows give the crew an excellent view rearwards and downwards. 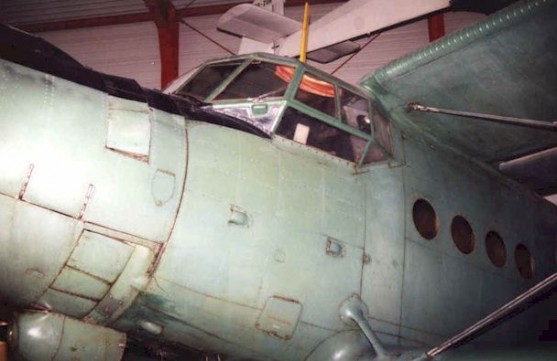 Another view of the cockpit area showing the windscreen from a different angle. The side-by-side cockpit could hose dual controls. 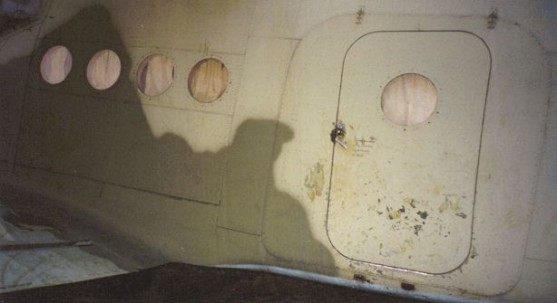 Port rear fuselage with characteristic circular cabin windows. The curtains appear to have been the standard fit, carried not only in passenger, but also military and agricultural versions.  The cabin entry door is surrounded by the larger panel which actually forms a cargo door, hinged upwards. 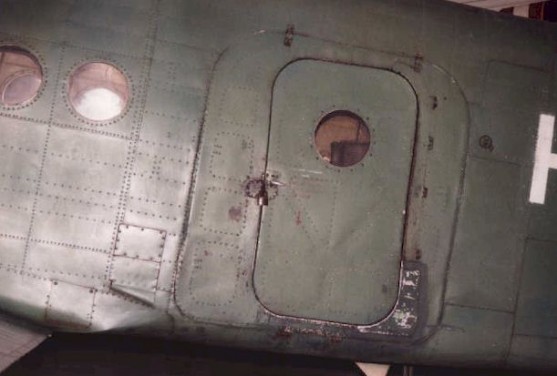 The same area on an even more battered German An-2 – I’m sure readers will not miss that padlock securing the door and traces of crude repair work at its lower right corner – a proof that ”ease of maintenance” and ”practical thinking” often go hand in hand, resulting in many interesting options for the modeller. 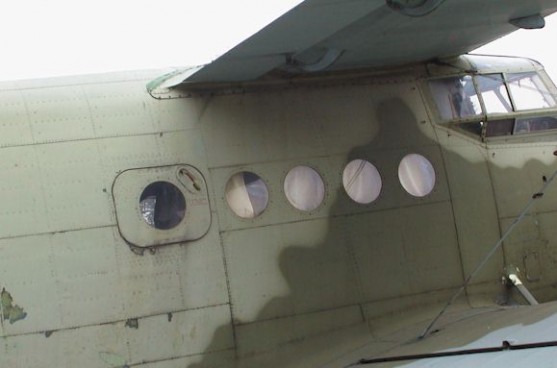 The opposite side of the fuselage features an emergency escape hatch at the rear end of the cabin. 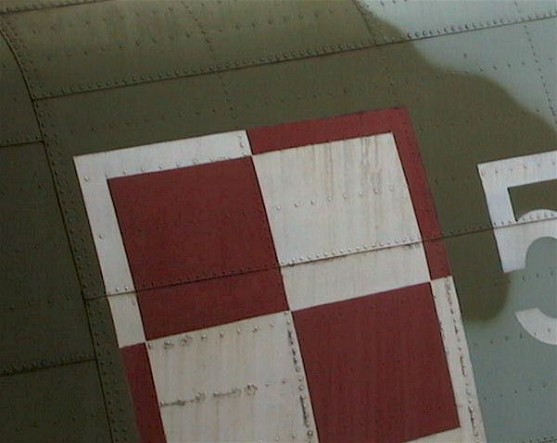 A close-up view of those rivets at the rear starboard fuselage. 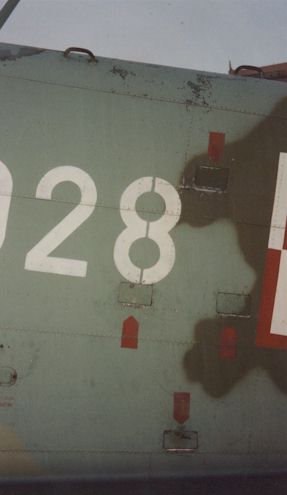 Detail of the access steps and handles allowing ground crew to climb a top the fuselage. Each step is faired with a spring-loaded cover and clearly marked with a red arrow stencil. 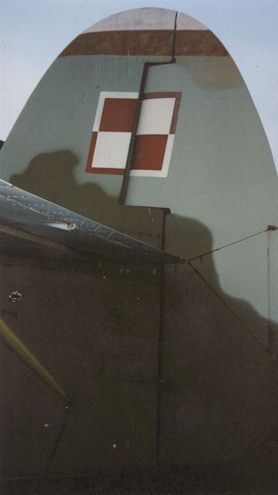 The elliptical vertical tail features a large, aerodynamically-balanced rudder shown here. The Polish national insignia has been split between the fixed and moveable surfaces, its contour emphasizing the rounded leading edge of the rudder.

Due the general naming practice in the Soviet industry, sorting out all the variant designations, their precedence on the production line, and the detailed configuration differences between them is a mammoth task which lies far beyond my research possibilities for this article. The source of the difficulty lies in that the Soviets have been using subtype designations to describe the intended purpose of the aircraft rather than technical configuration of the airframe.

In determining versions of the An-2, one is not aided by any significant visual differences. No airplane in history has been in continuous production essentially unchanged as long as the An-2. The only two ”major” An-2 airframe changes over half a century were the introduction of squared-off vertical tail on the An-2M and the enghine change in the An-3 resulting in a new nose. Both changes did not survive long on the production line.

This article was originally published in IPMS Stockholm Magazine in October 2003.