What better way to introduce the Islander than lift a quote from Britten Norman’s website?

“The ubiquitous Islander is the best-selling commercial aircraft produced in Western Europe. Adaptable, versatile and durable, it has an unsurpassed record of solving transportation problems simply and economically in some of the world’s harshest environments.

Ten seats, twin engines and a design driven by the requirement for ease of operation provide exceptional levels of utilisation. Constant refinement ensures that the Islander continues to excel in modern-day roles including environmental protection, transportation, air ambulance, fisheries protection, photo surveying, policing and parachuting to name but a few.” 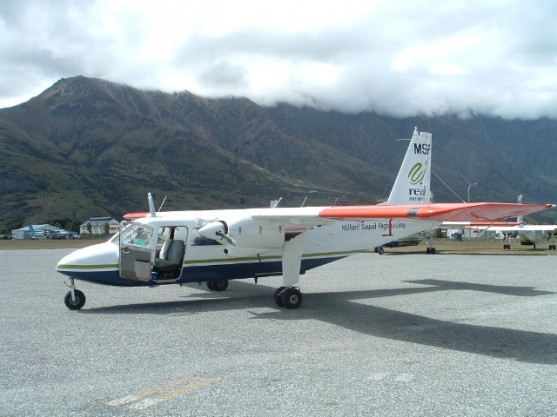 Certainly the Islander is a popular aircraft in my country, New Zealand, where it has proven ideally suited in a number of tourism operations. When I got the re-release of the Airfix kit I was pleasantly surprised to see that it included attractive decals for an aircraft operated by Real Journeys ( www.realjourneys.co.nz ), a company based near my parents’ home town where it is used for mountain sight seeing in the Milford Sound Area of Fiordland. As such it formed a good choice for my first Kiwi modelling subject after over 90 previous builds. 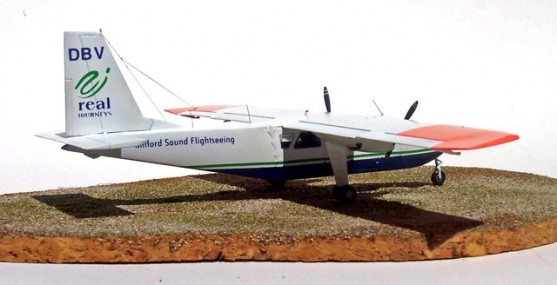 The Airfix kit is quite good for an early 1970’s offering, but is spoiled by thousands of rivets and over-stated external fuselage reinforcing. On another slightly critical note, I feel it would have been better to have moulded all three cabin doors shut, rather than offer less than perfect fitting separate ones. These things said, the kit is simple, has adequate internal detail for a closed cabin, and captures the lines of the Islander well.

I got in touch with Real Journeys and they were very helpful in forwarding a number of images of some of their aircraft to me. This soon revealed that I needed to add an additional rear window on each side of the fuselage, and that the aircraft needed to look smooth. To be honest removing the rivets was the hardest part of construction, although I barely found room for weights to prevent tail sitting: A thin lead sheet was placed under the cabin floor, plus the nose and engine nacelles were crammed with lead shot. 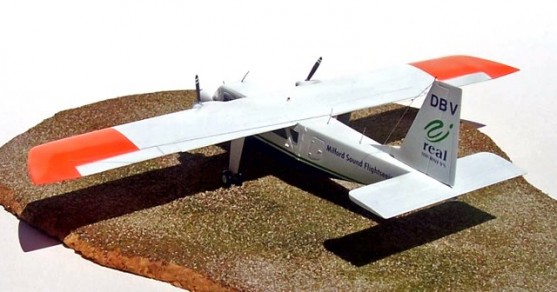 Painting should have been straightforward, but I failed to use a matt white undercoat which led to problems with coverage in gloss white. Other than that it was a simple build, and I can recommend this kit to anyone who fancies adding this significant, if basic, aircraft to their collection.