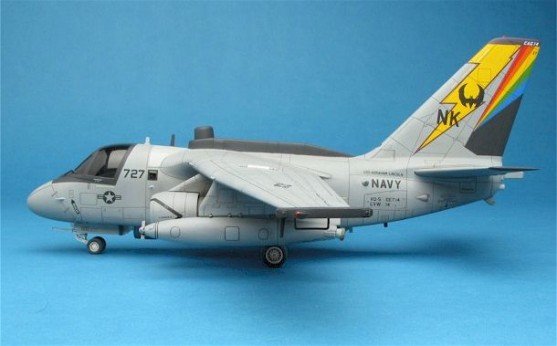 The Lockheed ES-3A Shadow was the short-lived (1991-1999) electronic warfare and reconnaissance variant of the venerable S-3 Viking anti-submarine aircraft. It was developed in the 1980s to replace the retiring EA-3 ’Whale’ as the carrier-based electronic warfare and reconnaissance platform. The ES-3A Shadow’s role was to extend the carrier battle group’s horizon of tactical awareness well beyond the physical horizon, and its core missions involved collecting electronic intelligence (Elint), communications intelligence (Comint), and signal intelligence (Sigint).

Sigint missions take advantage of the Shadow’s passive sensors to determine the precise locations and intentions of hostile missile sites, anti-aircraft sites, and ground-control radars. Comint does the same, but focuses on monitoring communications. In the Anti-Air Warfare mission role, Shadows use their sensors to passively develop an accurate assessment of enemy air defences and geo-locating threat air platforms.

In addition to these core roles, the airframe could carry a buddy store for carrier-based refueling services. A total of 16 ES-3A aircraft were created by converting existing S-3A airframes. All anti-submarine warfare components were removed, including the sonobuoy launchers, the magnetic anomaly detector, and associated avionics. The torpedo bay was replaced with an electronics bay. Most obviously, more than 60 additional antennas were added, including the dorsal and ventral ”canoe” housings and dome antennas. Inside, the flight controls for the front right seat were removed as this seat was occupied by a non-flight officer, the ”Electronic Warfare Combat Co-ordinator.” The rear two seats were occupied by Electronic Warfare operators and cryptologic tacticians.

Due to budgetary constraints, the Navy decided in the late nineties to terminate the ES-3A program. As of 2002, the Navy had no carrier-based aircraft dedicated to the combined Elint, Comint, and Sigint missions, although it is hoped that a variant of the F/A-18 platform may serve these functions in the future. 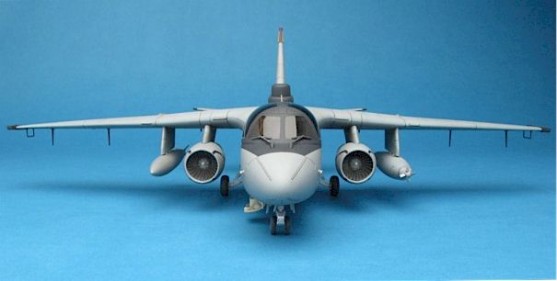 This AMT/ERTL kit, based upon its S-3A kit, is well-known for its excellent, crisp, recessed panel lines and its excellent fit. It was therefore a pleasure to construct it completely out of the box. The only disappointment is the poorly detailed and incorrect cockpit. Thankfully, the darkly tinted canopy all but hides this fact as the interior can only be seen with direct, bright illumination.

The only potential construction difficulties arise from placing some of the covers on the bottom of the aircraft, in particular the electronics bay covers which replace the torpedo bay doors of the S-3. To install these correctly with the vents on the sides of aircraft, a significant amount of filling and sanding is needed to fill the gaps.

After thinning the wing and tail trailing edges and rescribing the ends of some panel lines lost during assembly, the model was ready for its painting and markings.

Model Master enamels were used with a base coat of FS 36375 Light Ghost Gray with slightly lightened flat black for the wingtips, horizontal stabilizer tips, and dorsal ”canoe” housing. The purple on the top of the vertical stabilizer was hand mixed and matched to the purple outline of the lightning bolt decal. 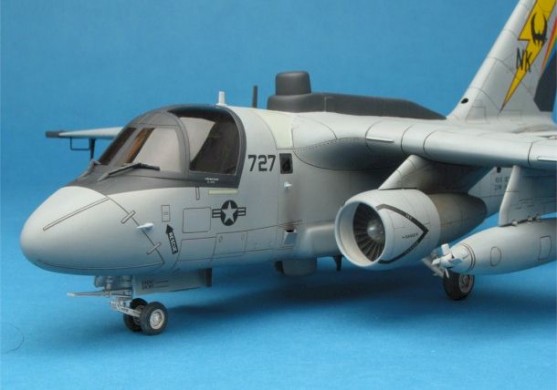 The canopy was sanded with progressively finer grains of Micromesh polishing pads, finished with a rub-down with a cotton T-shirt dipped in plastic polishing solution, and dipped in Future floor wax. The entire model was sprayed with Testers Glosscote to prepare it for the application of decals.

The markings for this aircraft have been produced by both SuperScale and CAM Decals. The original SuperScale sheet had some mistakes some of which are corrected with a small decal sheet the company will supply at no charge upon request. Unfortunately, even with these corrections there are still some small errors and omissions — most notably the lack of a bat insignia for the nose, ”slime” lights, and wing walkway markings. The CAM Decals sheet provides all of these markings as well as including the entire purple vertical stabilizer tip, eliminating the need to hand-mix this colour. I would recommend using the CAM Decals sheet if given a choice between the two.

Before weathering, the decals were sealed with Testor’s Glosscote. The panel lines were then highlighted with a wash of a dilute mixture of black and brown ”The Detailer” acrylics. Excess was removed with a damp cloth or cotton swab. Following the panel-line wash, the entire aircraft was sprayed with Testor’s Dullcote to flatten the finish and to give it some ”tooth” for the final weathering, which was done with pastel chalk. Exhaust staining around the engines was applied gradually as a series of very light coats of very thin solutions of brown and black Model Master enamels. 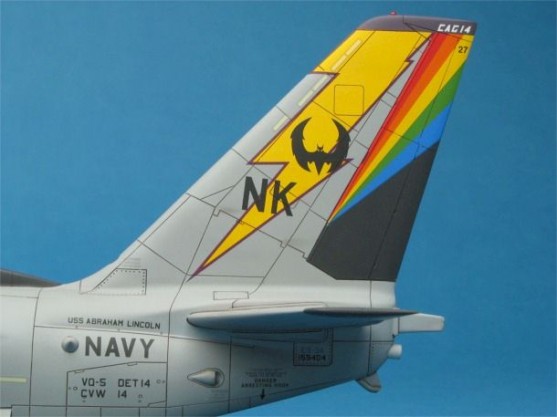 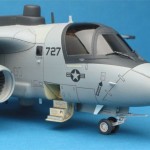 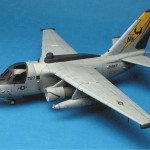 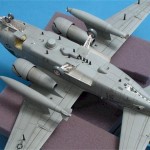