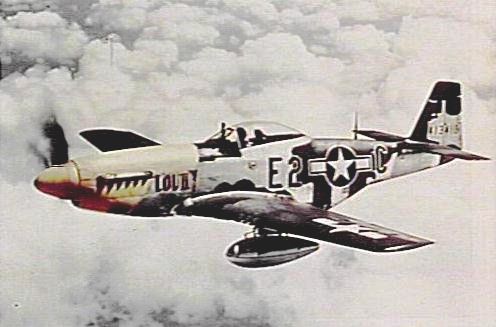 In May 1998, this Magazine published A Story About Lou IV, a debate about blue – or green – or mixed – P-51s of 375th Fighter Squadron of the 361st Fighter Group based in England. I find all the discussion about the Blue or Olive controversy to be very interesting, so I would like to add my little bit.

Some years ago I owned four Stinson L-5 aircraft. I purchased these planes from an old crop dusting service in California.

The planes had been used as spare parts sources for a fleet of heavily modified L-5’s used in northern California for crop dusting.

The L-5’s I owned had not been converted, but had been dismantled and put into storage. The planes ranged from WW2 colors, to post war U.S. Airforce silver dope. There were a number of parts that had come from a military repair depot in the mid-west; I don’t remember exactly where. In any case, some of the parts, such as control surfaces, were finished in the original WW 2 style colors.

What this is all leading up to, is the impression of the colors. As you may well know, aircraft painted with the traditional Olive Drab upper, and Neutral Gray lower surfaces, also had, in many cases, a dark, or Medium Green irregular pattern around the periphery of the flying surfaces. This was the case for the control surfaces I had. I must also be mentioned, that the pattern of the green was consistent, and quite the same, for all similar surfaces; so this was not some sort of touch up (I also have all the factory drawings for the L-5, on microfilm, and the painting instructions show that same pattern).

In any case, this green, particularly when viewed in the sun, had a very distinctive blue green cast, as compared to the Olive Drab color. The components I owned were very old, but they had been in un-lit storage, for many years, and out side of color drift, due to ageing, they were very clean, and distinctive. Now, this green was also used as an anti-glare color, and was also used as a field applied camouflage, as seen on the top surfaces of some Martin B-26 aircraft.

With out getting into an argument, maybe this is the color that is seen on Lou IV. 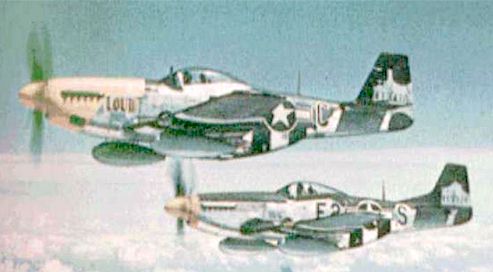 I must also add…

The job I had was a ”Radio Relay Team Chief”, and I had a 2-1/2 ton truck, with a radio hut on the back, as my primary piece of equipment. We were almost continuously in the field, and did our own maintenance on all our equipment. One of the tasks of maintenance was to ”spot paint” any scratches, or dents to prevent rust.

I remember one our the trucks in my unit was painted a very glossy black green. The crew of that truck had found some paint in a supply depot, and had started to spot paint the truck. The paint turned out to be Helmet Liner paint, which was a glossy dark green color, so they decided to paint the whole truck…with brushes, by the way. If I was to model that GMC 2-1/2 ton truck, from the 124th Sig. Bn, 4th Inf Div.; every modeler who saw it would tell me no truck ever looked like that, I have no photos, as that was the last thing on my mind, but I can still picture that truck.