My Misadventures in 1/24th Scale-Land

I’ve been building WWII fighter and bomber kits since I was a kid. When I was young, I liked big kits, but I usually rushed through the assembly, leaving glue seams un-sanded, tires at incorrect angles to the strut, wings and stabilizers oft askew. Then I’d slap on some paint (either Pactra or Testors enamels, since those were the only ones available at my local hobby shop) and stick the kit up on a shelf to collect dust (until inevitably destroyed by our maid, who thought it her duty to dust the models—usually into a million pieces!)

When I re-discovered the hobby at college, I began to realize the intricacies and craft of building a quality kit. My first kit was the excellent Hasagawa 1/72nd Scale B-17G Flying Fortress, which went together like a dream. Since that time, I have preferred to build in 1/72nd and 1/48th scale, since I have limited space in my apartment, and it’s possible to fit five or more 1/72nd scale aircraft on one bookshelf. The profusion of excellent, detailed kits available from Hasagawa, Academy, Revell, Monogram, Airfix, Heller, Frog and even obscure planes from Planet Hobbies and Special Hobby make it possible to model even the most obscure WWII aircraft in 1/72nd scale. Add an Eduards, Extra-Tech or Airwaves detailing kit, some SuperScale or Aero Master decals, a clear Squadron canopy, and you can produce a kit so realistic, it feels like you could shrink yourself down, crank over the motor and take to the sky.

That said, I have to ask myself, looking back, why I decided to leave the comfortable confines of 1/72nd scale and attempt to build the formidable Airfix 1/24th scale Supermarine Spitfire Mark 1A kit (this is a misnomer. The kit provided is for two version of a Spitfire Mark I, not a Mark IA)? As a ”Battle of Britain” and Spitfire enthusiast, I have built several 1/72nd scale Spits, including the excellent Hasagawa Mark VIII in SEAC markings, an Airfix Mark IX, which, despite the lack of cockpit details was easy to build and looks excellent on my RAF shelf, and the new Revell Pro-Modeller Mark Vb. So, I figured, why not build the biggest Spit kit available? Lured by the appeal of a truly detailed cockpit, a sliding canopy, detailed Rolls-Royce Merlin engine, movable flaps and tail plane, and retractable landing gear, I plunked down my forty some-odd bucks and dove in…only to find the pool filled with quicksand!

The kit looked terrific in the box, and although the instruction sheet was only visual instructions provided, and made reference to the Humbrol color chart (I don’t happen to own one, so I used several Spitfire references, including Osprey’s ”Late Marque Spitfire Aces” and ”Wings Of Fame” Magazine # 9 as guides), I figured I’d have no trouble cobbling together a terrific-looking, big scale Spitfire in ”Battle of Britain” markings. WRONG!!

The moment I began the first sub-assembly, the Merlin engine, I encountered parts fit problems galore (N.B.—I have been told by other modelers that the difficulties encountered with this kit may be because it was taken from a 1970’s mold, and older kits, available at kit shows, do not exhibit these problems. I will not argue this point, since I bought a ”current” version of the kit, and can only judge from the kit I built—or, rather, attempted to build!). The two main engine halves, (parts # 3 and 4) did not fit well together. The alignment pins were off, and had to be redrilled using my pin vise. Part # 1 did not have the tab indicated in the drawing, and even with putty, did not fit well to part # 2.

All of the second subassembly went well, but positioning of part # 9 was very difficult, since part # 33 required a lot of sanding to make it fit firmly on top of the engine. The oil cooler assembly (parts # 14, 15, 16 and 17) also did not fit well, and required considerable sanding, puttying and modification to fit onto the engine block. In the fourth subassembly, the cockpit galls, clear part # 21 did not fit into the holes in part # 29, and required a lot of sanding and re-drilling before it would fit. Once painted, however, and given a wash of gray enamel, the instrument panel looked nice and realistic. I painted the lower half of clear part 27, the reflector gunsight flat black, leaving only the sight and the reflective surface clear.

When I reached subassembly five, the pilot’s seat and throttle levers, the real fun began nightmare. The pins on parts 32 and 33 were so badly mis-aligned that I ended up cutting them off with my X-Acto blade and gluing them directly to the sides of the chair (Part # 30). All of the parts fit well in subassembly 6, and since I prefer to build my planes without pilot figures, I skipped subassembly # 7. Subassembly # 8 went smoothly, as did # 9, but the next section proved very difficult. The harness, which held the massive Merlin engine and kept it from shaking in flight, was very difficult to attach to the firewall (part 51), since the holes were the wrong size, and the horseshoe shaped center section must be positioned at a slight angle, despite the close up drawing of the installed harness in subassembly 11. Both parts # 50 and 52 came off about ten times while I tried to glue the harness into place using white glue. Due to their obscure location on the parts spurs, I lost parts # 54 and 55, but was able to easily craft new parts using Evergreen Styrene strips (.040 x .125″(1/8). 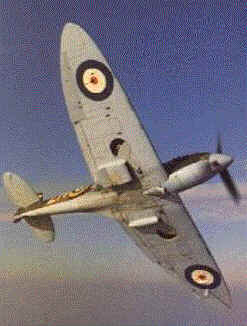 The two fuselage halves did not fit well, and getting the Merlin engine into the correct position so that the exhaust valves could later be glued into place was a major headache. Again, the other half of the engine harness, parts 52 and 53 did not fit well, and came off several times during test-fitting of the fuselage halves. I had a difficult time gluing the fuselage together, but finally succeeded by using Tenax-7R adhesive and masking tape. Once together, the fuselage did look impressive, and I skipped ahead to subassembly 18 and added the ailerons. The went in without trouble, but required some sanding at the roots for a tight fit.

The next few steps, or rather the difficulty of subassemblies 13, 14, 15, 16 and 17 finally forced me to abandon the kit. Let me explain my reasoning. First of all, the machine guns (parts 74-81) are ALL too short, and none of them fit properly into the wing. All of the other parts fit fairly well in subassembly 13. The ammunition boxes (parts 85-94) were so crummy looking that even after shaving off the HUGE central mold lines, I decided to discard them. The oil filter (part # 100) and air cooler (part # 104) do not fit flush with the sockets on the underside of the wing, and must be puttied and sanded. As for the landing gear covers, parts 110 and 111—forget it! They simply did not fit into either the underwing slots or onto the pins (again, mis-aligned) on the landing gear struts. I tried redoing this step about ten times, to no avail.

I completed subassemblies 18, 19 and 20, but could not fix the problems with the wing. This morning, with a heavy sigh, I put the completed fuselage and incomplete wing back into the box, closed the lid with its enticing cover artwork, and consigned the kit to my linen closet. Perhaps, some day, when I’m feeling particularly brave (or masochistic), I’ll pull the 90% complete kit out and give that damned wing section another try, but I doubt it will be any time soon. All in all, I wasted about 20 hours of my precious time on this kit. Needless to say, I do not recommend it, even to the most advance modelers. Save your money and your time!

This experience has, however, taught me a valuable (albeit expensive) lesson. From now on, despite the box art, I’m sticking to 1/72nd and 1/48th scale kits!

(Ed.) Jeff’s submission of the above article was augmented by the following comment: ”Of course, this article is only meant to reflect my personal experiences building the Airfix kit, and not as a put down of Airfix kits in general. I’ve built several excellent 1/72nd scale Airfix kits. It’s just that this one was a nightmare…for me. I’ve heard from other modelers that the older MPC kit upon which this was based is very good, but where do you find old kits these days? Now the Academy 1/48th scale Spitfire Mark XIVC was a joy to build, and looks terrific. I consider it one of my ”flagship” models. Truly a delight.”

This article was originally published in IPMS Stockholm Magazine in May 1998.