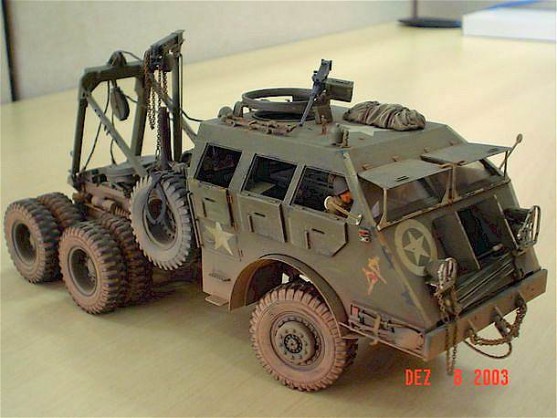 Early combat experience of the US Army in land campaigns in Africa and Italy showed a need for an off-road tank retriever capable of coping with the new heavy tank designs. The M26 6×6 Armoured Tank Recovery Vehicle (also known as the ”Dragon Wagon”) was devised to provide this capability.

The design of the vehicle was comissioned to the Knuckey Truck Company of San Francisco. This company had been specializing in mining and quarry truck designs, and the resulting tractor was of gragantuan proportions, boasting a loading capacity of 40 tons. The first tractors were turned over to the Army in late 1943. 1,270 were completed during a 5-year production run. Operational vehicles were often used also for other tasks than tank transport, such as ferrying boats for river crossing operations.

Because Knuckey could not meet production demands, the production was also commenced by Pacific Car and Foundry Company, which eventually ended up manufacturing most of the tractors.

The first production M26 model was armored for battlefield recoveries. By 1944, a second unarmored model M26A1 with a canvas cab roof took the place on the production lines.

Despite my general preference for modern vehicles, this truck is simply amazing in its looks and I think everyone who like to build military kits must have felt a temptation to build the Tamiya 1/35 kit.

Compared to what you have probably heard about Tamiya kits, specialty this ”new generation”, there is nothing special to to talk about . The parts almost fall together. In my opinion, the version of the markings with two pinups ”Somewhere in Germany, 1944 or 1945” is the best of those provided in the kit.

I built the model ”out of the box” and I did not encounter any problem during the construction work. The assembly instructions were very clear, as usual with Tamiya, but assembly required constant attention due to the many difficult subassemblies.

I started with the cab interior. I painted it with a little darker shade of Olive Drab to reflect the fact that the interior does not get get exposed to all the sun, rain and dust that exterior surfaces do. 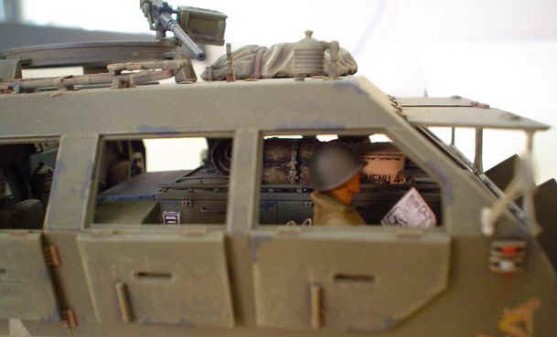 After finishing the interior with a wash of artist’s acrylics and dry-brushing wit h Testor’s enamels, I closed the front cab and completed the assembly without any problems.

The excellent tires provided with the kit were treated with coarse sandpaper for a used look.

I assembled, painted and finished the crane set separately of the chassis and cab. It was much easier than putting everything together and doing all the detail paint job later. 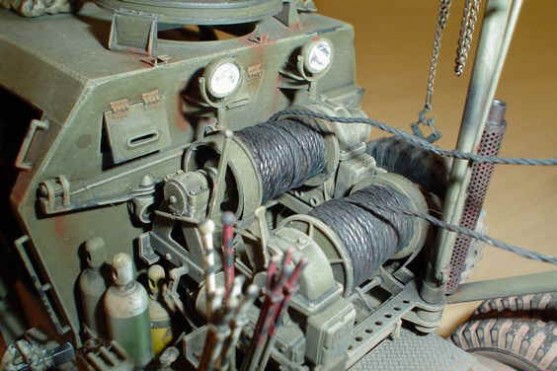 I like to use automotive paints to paint my models. These paints provide a very good finish as they are really fine and do not conceal even the tiniest details of the model. This kind of paint also sets really fast. No more that five minutes after a spray job the surface is dry to the touch. Thinning can be done with any suitable thinner from the automotive paint shop.

Mixing proper colours shades is like a hobby in a hobby. I have originally purchased only black, white, blue, yellow and red automotive paints; when I need some colour I mix these basic tones to obtain it.

Another advantage with automotive paint is that the mixed shades can be stored. You just need to use a hermetic glass jar. I made my Olive Drab paint 7 months ago and it does not show any signs of deterioration.

So, I first sprayed a coat of acrylic primer to prepare and protect the plastic surface. I then used the airbrush to apply two or three layers of the Olive Drab mixture.

The decals could be applied directly without a clear undercoat, because the automotive paint dires to a high-gloss surface which works great with even the largest decals. After the decals were completely set, I applied two layers of the excellent Testors flat varnish and the model was ready to receive the final weathering.. 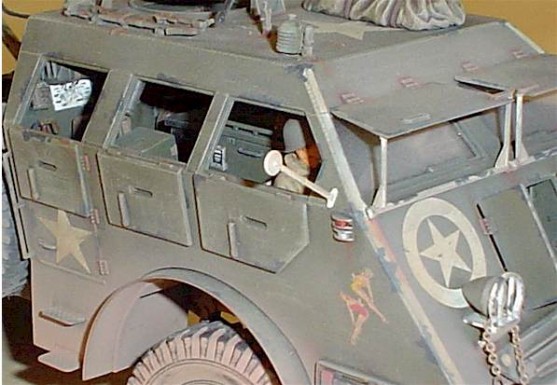 I use a very thin mix of Raw Umber artist’s acrylic, flat black Tamiya acrylic paint and water to apply washes to my models. The mixture is good because it can be applied over the entire surface, not only crevices giving the model a good ”faded” look. If you’d like to try this technique, use a soft flat brush and apply the wash over the entire model. Let it dry and check the result. If you want more shade in some areas, just apply one more layer.

For highlighting the contours thorugh dry-brushing, I like to use three or four different tones of model enamels. I start with the same basic colour that has been used to paint the model and then proceed to lighter shades up to a really light beige, like a desert sand or israeli sand gray. Of course the choice of colours may vary depending on the base color of the model.

Applying mud and stains (my son hates me doing it!) was done using a mixture of Tamiya Flat Earth, Red Brown, a touch of Flat Red and some Flat Base. This was liberally applied on the lower surfaces and tires with some overspray simulated on the cabin and upper portion of chassis.

After this I have additionally emphasized the chains with a metallic tone and dry-brushed the tires with dark gray enamel. 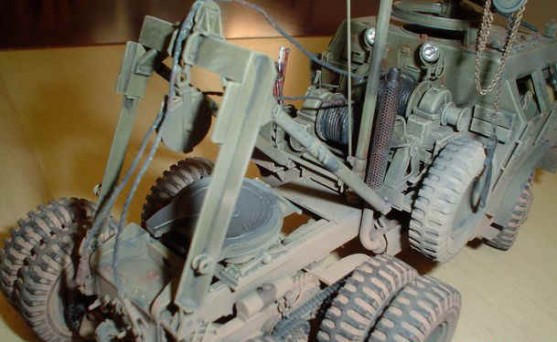 Despite the excellent engineering of the kit, building it was a big challenge for me. I prevailed, and I hope you’ll like the model. I definitely do!