For a change from the Academy’s modern mainstream offering described in my other article this month, here’s something completely different.

I have had little success in finding information in English on the Letov S.139. I have however managed to find several photos and some excellent plans that show it was part of a family of civil light sporting planes featuring parasol wings with fixed leading edge slats, and a variety of small engines. These were designated the S.39, S.139 and S.239. Air cooled engines used included 2-cylinder horizontally opposed, 3-cylinder (Walther Polaris I think), 4 or 6-cylinder inline, and a 5-cylinder geared radial that looks like a Podjoy.

I soon as I saw the Letov S.139 on the Modelimex on-line shop I knew I had to buy one. Such a strange and quirky looking aircraft with the passenger in front of the parasol wing and the pilot behind it, plus fixed leading edge slats and plank-like fin and rudder proved irresistible to me. This was because of several reasons – I like Golden Age civil aircraft, I wish to increase the Czech subjects in my collection as an acknowledgement of a strong email friendship I have with a Czech aviation and model enthusiast, and I love “clunky” looking planes. A bonus was the attractive colour scheme (which by the way seems to have been of this family of Letov aircraft). 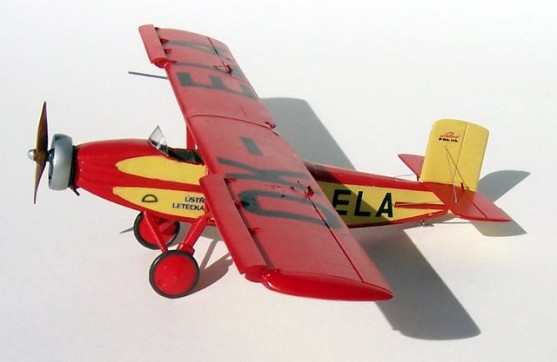 The Legato kit is quite simple with a limited number of resin parts, a comprehensive Photo-Etch (PE) fret, and small acetate sheet with instruments and windscreen outlines, plus decals. The instructions are very small and basic, with plans on their reverse. The photo-copy quality of the plans is not that good. It is apparent that the same kit is the basis for all three versions mentioned above, as it is engineered to have different noses and engines forward of the front cockpit.

There are few pinholes, but several of the smaller the struts are generally too thick. In hindsight I wish I had replaced the cabane struts with styrene like I did for some of the undercarriage and wing strut components. The PE fret provides seat belts, instrument panel, eight fiddley mounts for the leading edge slats, boarding step surrounds, control horns and one or two other items. I can’t say how many times I broke the slat mounts off, but I finally lost one permanently and replaced it with 5 thou plasticard. Getting all of the struts right was a bit of a challenge as they are complex and model is quite small. At some stage I lost the acetate film, so I had to make my own windscreens which was no great challenge given their simple shape. I also made my own exhaust pipes after loosing the resin one on the floor somewhere.

Painting was a bit tricky, not least because all you have to go is the box-art profile. Fortunately I found two or three photos of the actual plane featured in the kit that provided a good guide for demarcation areas between colours. I painted and masked the red first, followed by the cream. Decals were a bit fragile and brittle, and despite going on over a good Humbrol gloss they silvered badly on the wing registrations. and this took some fixing. In hindsight I should have floated them on with Future, but at the time they seemed to go on very well.

This was not the best resin kit I have made, but it was quite reasonable quality overall with generally good fit. At 19 Euros plus postage it landed in New Zealand for 38 Kiwi Dollars. So whilst certainly not cheap, it was worth the price for the unusual subject. I have heard Legato is moving away from resin kits to focus on producing AZ Models multi-media injected kits, so I would recommend anyone who likes the subject and has some experience with resin kits buy one before they possibly cease to be available.