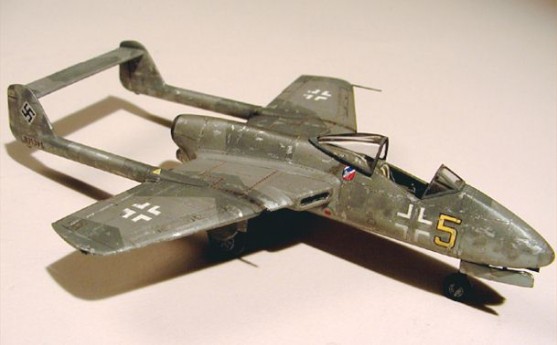 Having read the call on IPMS Stockholm’s site for new modelling articles, I thought I’ll give it a try. Here are the pictures of my Focke-Wulf project VII Flitzer. The Flitzer was a study for a single-seat, jet powered fighter with performance superior to that of the Me 262.

The 1/72 kit of the type is manufactured by Revell company. Revell should be commended for bringing an entire series of Luft’46 aircraft into mainstream modelling. Among all the speculative German aircraft designs, Focke-Wulf Flitzer should take prime space because it progressed beyond the ”paper” stage, full-size mock-up and elements of the prototype aircraft being ready at the time of German surrender.

The design featured a twin-boom short-fuselage configuration used (independently) also on the deHavilland Vampire. A novel feature was the intended use of mixed jet and rocket power, later dropped in favour of a single Heinkel He S 011A turbojet. The intended armament included two 30mm in the lower nose plus two 20mm cannon in the wings. 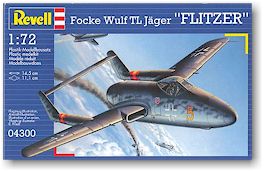 Curious about the Revell kit is that it depicts the initial dual-powered version of the Flitzer with the rocket engine tube placed below that of a turbojet.

The kit comes on 2 sprues of light grey plastic with engraved panel lines and a wealth of detail. The quality of the moulding is perfect! The cockpit is detailed with instrument panel, rear bulkhead, seat, stick and side consoles. Typically for Revell, the canopy is thick but clear. 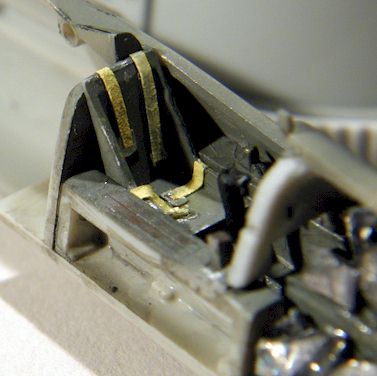 The only missing details in the cockpit were seat belts.
I added mine from strips of masking tape.

The construction was simplicity itself and went quickly. I recollect only one little problem during the work: weight in the nose of plane. There is only a very little place available for it. I had to cut the lead shot to little pieces and stuff every millimetre of the available space with it, then fix everything with epoxy glue.

A decal set is included with one set of markings, but are complete with finely printed stencils. See the photo: 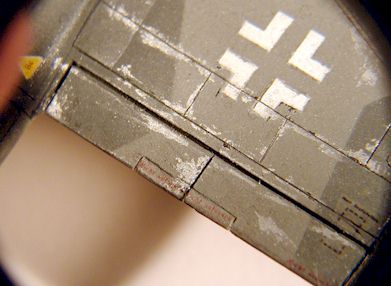 I airbrushed the surface and then applied weathering with a brush. The colour scheme is open for imagination. I have decided to do the Luftwaffe fighter colour scheme of RLM 74 (Humbrol 27) and RLM 75 (Humbrol 140) with RLM76 for bottom surfaces (Humbrol 87 and 34, 1:1).

Areas of chipped paint were simulated using silver paint – Humbrol 11. I assumed the real aircraft would be built from metal. I couldn’t find a conclusive information about this, but the Luft’46 site mentions the Flitzer project being cancelled in 1945 due to the excessive use of metal in the airframe. 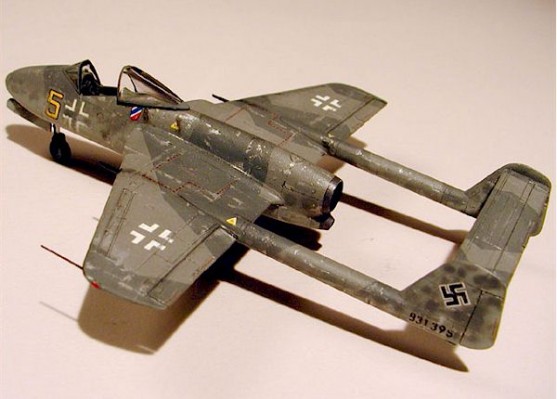 All the pictures were taken with Olympus 2100 UltraZoom digital camera. I used a sheet of standard white photo background paper and two spotlights. The close-up shots were taken with a magnifying glass placed between the camera lens and the model! 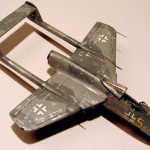 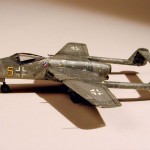 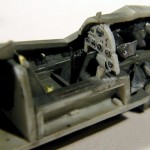 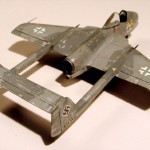 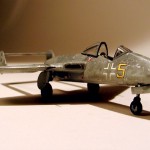 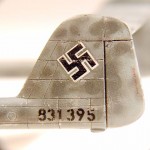