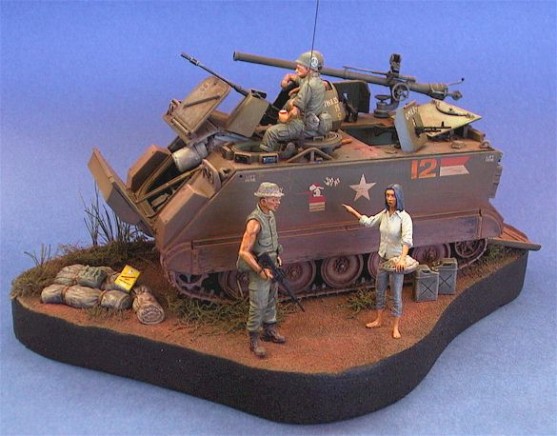 The M113 ranks as the most widely-produced armoured tracked vehicle ever, with over 80,000 units manufactured in more than 40 different variants. Despite its initial introduction as far back as 1960, the M113 is is still in service today. Upgraded, reconfigured, and introduced as new systems, it is also likely to remain in the inventory of many armed forces including US Army for the initial part of the 21st century.

The M113 Armored Personnel Carrier was the first modern ”battle taxi”, developed to transport infantry forces on the fully mechanized battlefield. As such it became one of the icons of the Vietnam war.

The vehicle was fitted with a 2-stroke six-cylinder Detroit diesel engine providing power through a 3-speed automatic gearbox and steering differential. A novel feature was that the body was built of aircraft quality aluminum alloy, giving strength comparable to that of conventional steel armour but with much smaller weight. This distinct weight advantage allowed the M113 to utilize a relatively small engine, carry a large payload cross-country and even swim through smaller streams and lakes.

The main armament was devised as a single .50-calibre machine gun plus secondary .30-calibre gun, but with the operational deployment the range of the carried weapons quickly expanded.

Academy has produced this detailed kit of the M113 in 1993. At the time it was one of the most competent armour klits around and a commendable attempt on Academy’s side to produce a kit that included ”everything”. Over ten years later it still is of good quality and an excellent value for money. The kit provides a choice between rubber and link-to-link tracks. Details include things like separate suspension arms, interior of the driver’s compartment, engine and transmission. There are also five figures included. Academy’s kits are definitely still the best 1/35 M113s available at this time, superior to the Tamiya and Italeri offerings.

The original Academy release represented the M113A1 armed with two M60 guns, a .50-calibre gun and a 106mm recoilles gun. In fact you can choose between 4 different vehicles: a US M113A1 ACAV, South Korean M113, Australian M113 or a US flamethrower version. Should you want something more out of the ordinary, there is an array of conversion possibilities, for example from AFV Club or Firestorm Models.

My model has been built 100% out-of-the-box. The kit was fun to put together with many detailed parts including the engine and positionable hatches. There were a few fit/alignment problems underway but nothing really serious.

Figures included in the kit (that of the Vietnamese woman was among them!) and all the extra equipment were arranged into a simple engine breakdown diorama. The only additions I made to kit contents were the jerrycans, a pack of rolled blankets and the strap of the M16 carried by the soldier beside the vehicle. I entitled the scene ”Waiting for Assistance”.

Having recently talked with aircraft builders on a club meeting I have made modifications to my usual painting process particularly regarding preparation for decals and washes. Previously I have not fully appreciated how much a gloss surface means for the outcome of these steps.

With decals applied and sealed it was time for the weathering to begin!

I am very pleased with the way this model turned out. Particularly the decals look prefectly. Contrary to what people say about Academy decals, I wouldn’t be afraid to use them again in another project. This is because I could learn from modellers specializing in other areas than my own, and then snap up and adopt one or two of their techniques. Invaluable! 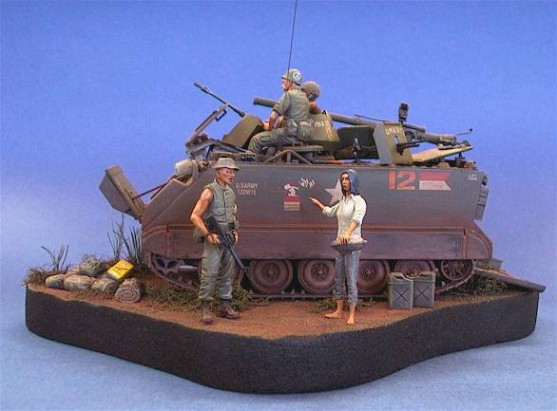 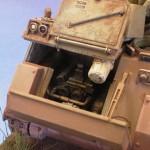 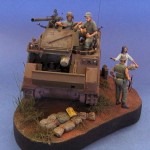 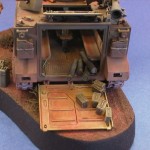