Bo Genvad’s modelling interests circulate around an area as specialised (or wide if you prefer) as US Navy experimental aircraft. Here are some samples of Bo’s growing collection of 1/72 models.

The period of 1940s to 1950s was the golden age of aviation experiments. Among it’s heritage there are many different and unorthodox aircraft. US Navy was a driving force behind many daring concepts. Bo’s collection shows a sample of unusual experimental fighter aircraft.

More often than not, the idea behind the aircraft seemed a good one at the beginning, but the technical and political development would have made it obsolescent before it could be put into practical use.

An extraordinary example of this was Convair Pogo which was conceived as a ship-borne fighter aircraft perfectly suited for the protection of convoys. The plane proved extremely sensitive to wind conditions and could only land safely when no wind was present. This property is easily understandable once you look at the aircraft in an upright position. However, this was apparently not obvious for the design team, which additionally placed the cockpit so that the ground visibility for the landing pilot dropped to near-zero. It was first after the initial flight trials that the constructors became aware of the weather conditions at sea… 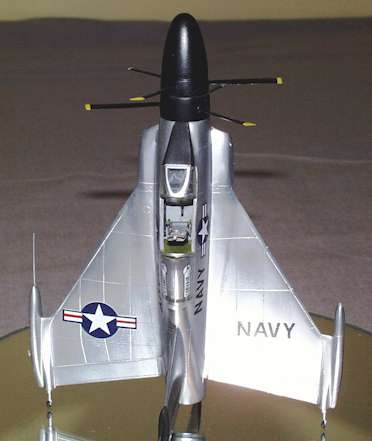 The Convair XFY-1 Pogo was built in 1954 as a fighter with vertical take-off and landing capability. Only one specimen was flown. The flight trials lasted only until June 1955, after which the project was abandoned.

Grumman XF5F Skyrocket was the first twin-engined Grumman deck fighter. Built in 1940, it was looking impressive with the engines protruding far in front of the aircraft. It proved not to be a pilot’s aeroplane mostly due to the directional instability. Later in the project the fuselage was lengthened to remedy this, giving this stubby aircraft a more orthodox appearance. This didn’t help the project to survive. Only one Skyrocket was ever built. A few years later Grumman designers succeeded with a completely different twin-engine design, the Tigercat.

Convair XF2Y-1 Sea Dart first flew in April 1953. Surely it was unique: a supersonic flying boat fighter! It had a delta wing, water ski landing gear and a boat-shaped bottom. The engines were recessed in the top of the fuselage. The engines never reached their expected power, and there were problems with severe vibrations of the skis. As could have been expected, the requirement for such an aircraft soon vaporised. Convair managed to build four before the cancellation time.