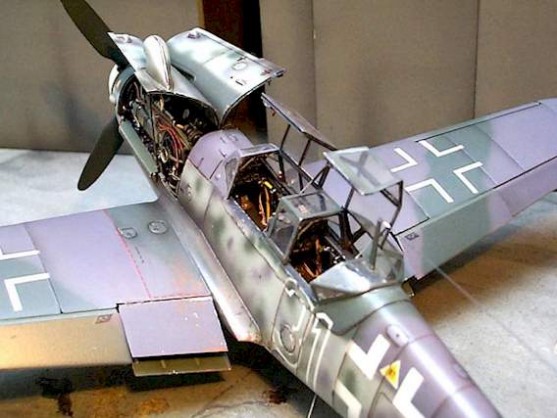 The trainer version was a makeshift construct born in early 1944 out of a growing need to speed up young pilots’ transition from school to combat aircraft. With dangerously short training schedules, the extra instructor seat in the 109 was direly needed, even more so considering the vicious handling characteristics of the DB 605-powered Gustavs during landing and take-off.

The G-12 was not to be built new, but rather rebuilt from components of earlier war-weary airframes. The conversion work was therefore based on a variety of combat subtypes like G-2, G-3, G-4 and G-6. Selected maintenance depots were assigned the task of production. 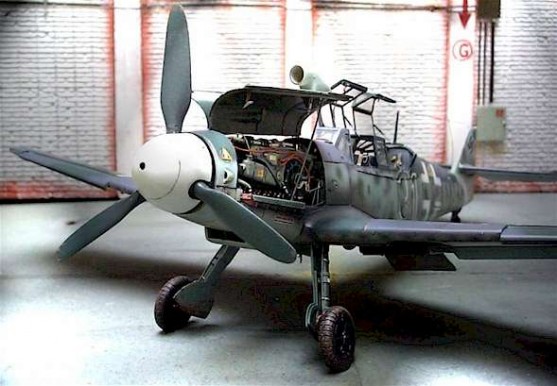 The conversion comprised installation of the second cockpit behind the ordinary pilot’s office. The new cockpit was even smaller that the original one and was covered by a new, heavily framed canopy. Being built into the fuselage spine, the canopy didn’t nearly provide an adequate view for the instructor. To improve things, the canopy sides were bulged to allow at least some degree of forward vision.

Due to the installation of the rear cockpit, the main fuselage fuel tank was also reduced from 400 to 240 litres. It would seem the natural choice to operate the aircraft with external 300 litre tank attached, but many photographs of the period show the G-12s without this tank.

After the war, the G-12 concept was relived by Avia. During the S-99/199 production batch, twenty-seven single-seaters were converted to double-seaters. On the later Jumo-powered CS-199, Avia even solved the canopy problem, providing rearwards-sliding clear canopies for both pupil and instructor.

Hasegawa is rightfully recognized as ”king of Bf 109”, so the choice of kit was easy. Their Bf-109G-2 kit no. JT106 is not entirely new (produced in mid-1990s), but is still excellent. Five sprues of medium grey plastic provide crisp engraved panel lines, and typically for Hasegawa, somewhat limited interior detail.

The kit was completed with resin DB 603 engine from Aires. The rear cockpit would have to be scratchbuilt. 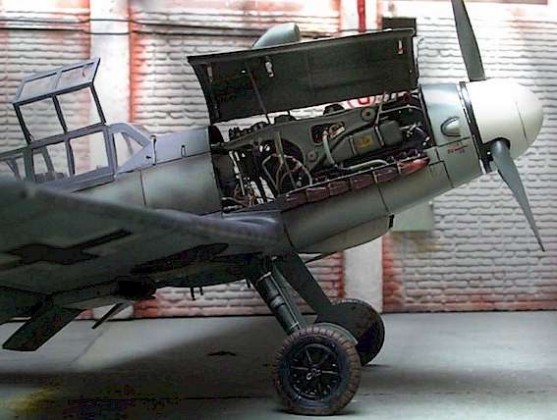 For the open engine compartment, I used the resin Aires kit of DB 603 as platform. The resin kit represents the bare engine ”block”, so proper installation in the airframe had to be resolved by scratchbuilding. I started with re-creating main engine bearings from plastic sheet and copper wire. Water and oil tanks and supports for the armament were scratch-built.

Exhaust stacks were provided from white metal. Using the widely available references, I then added piping and smaller accessories to the engine area to give more life to it.

A common misconception among modellers is to paint aero engines in a uniform color like black or dark grey. In reality, engines were complex machines made from a variety of assemblies which often arrived ready-painted from the subcontractors. Various sorts of metals were used. Color-coding was used already in the 1930s for plumbing and cabling. Summarizing, the engine room could look both busy and colorful, and this has been replicated on my model by some careful painting and shading. 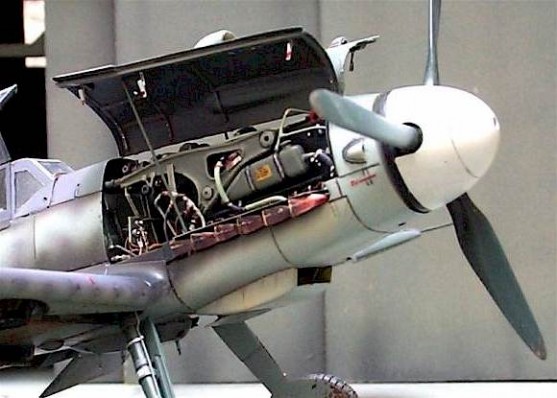 The engine cowling is provided in the kit as separate parts, but these were discarded. New covers were moulded in plastic sheet to emulate the scale thickness. The internal rib structure was added from fine aluminium wire and plasticard.

Following the drawings of the aircraft the first step was to cut the fuselage to include to the second cockpit. This step was made with the aid of a disc cutter mounted in the Dremel tool. The cutting itself is easy but care must be taken to avoid overdoing the job. Always take the blade thickness into consideration and proceed with a steady hand.

Moving on to the construction of cockpit interior, the front position is practically indentical to one used on frontline G model, but the rear one had to be made entirely from scratch. To be honest this did not offer many challenges, since several elements and equipment were common to both cockpits. The familiar items were the seat, rudder pedals, trim wheels, oxygene regulator, throttle control unit and the control stick. These items were promptly duplicated or reused from the scrap box.

The rear instrument panel on the other hand was completely different, being smaller and with only the basic set of flight instruments. The panel was cut out from plasticard, and filed to shape with a needle file. The dials were shaved off from another Bf 109 instrument panel I found among my spares and glued to the panel. I completed it with cables and the rectangular fuel level indicator.

Work on the cockpits was finished by adding seat belts, handles and what have you.

Now we approach the biggest challenge of this project, producing a new canopy. 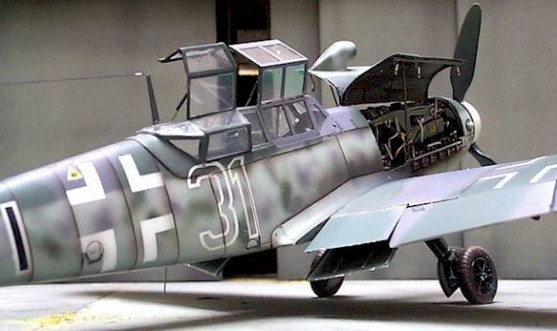 Due to the wrap-around shape of the rear glazed section the traditional male-female moulding was not possible. After some thinking I resorted to producing separate masters for the forward and rear portions of the canopy and vaccum-forming the parts in clear acetate sheet. Making the rear part separate made removal from the mould easier. The forward master was actually a kit canopy sanded down to allow for the thickness of the acetate sheet, and filled with epoxy putty to help lead out the heat. The rear master was carved and sanded from epoxy putty.

This way I become a happy owner of a closed twin canopy, but I wanted an open one. I very carefully cut out the opening parts using a brand new hobby knife and a steady hand.

Due to the very heavy framing typical for the Gustav I decided to replicate it in full rather than only by painting. A layer of aluminium sheet served as a material for external framing. Internal frame supports were also added using copper wire.

The work goes on

After having completed the fuselage, the rest of the project proceeded just like any other – or at least any other superdetailed one… Assembling the model is pretty straightforward and the Hasegawa’s reputation for ease of fit holds throughout the assembly sequence. Everything snaps into place where it is supposed to.

The kit provides separate slats and flaps, but not the ailerons. I cut off the ailerons and replaced them in a more ”relaxed” position. Landing flaps were attached in down position.

Baffle plates of the radiators were replaced with new items made from aluminium sheet, because I thought that the kit parts were too crude. Further detail was added in form of internal ribs made of sheet plastic

Final added exterior details were navigation lights. These were fabricated from transparent sprue. A suitable recess was made to each wing tip and the two lights carefully glued into place. Once dry these were filed flush with the wing contour with the file and finally polished to full transparency using a cotton rag.

As the spindly undercarriage of the 109 was so simple, the kit items were accepted with only a few cosmetic additions. The wheel brakes were replaced with ones of homemade construction. Hydraulic lines were fashioned from lengths of copper wire and then attached to the legs with tiny aluminium bands, that’s about all. 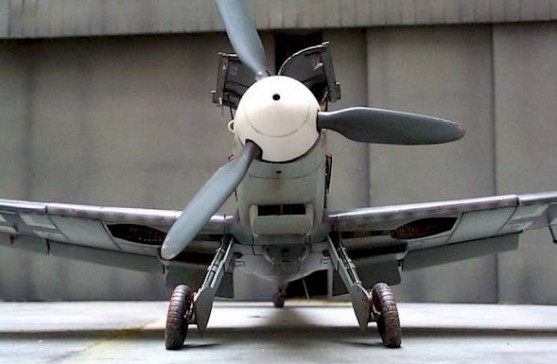 Reference for the camouflage scheme and markings was provided by an article in IPMS USA Quarterly Vol. 21, No. 4 by Richard Lutz. The depicted aircraft, hollow 31, comes from an unidentified training unit.

For the camouflage shceme, I used Xtracolor enamels. The three basic colors of RLM 74 & 75 upper and RLM 76 lower surfaces are available as ready-mixed shades in the Xtracolor range.

Markings were a combination of decals and painting. Kit decals were used for all smaller stencils, fuel triangles and factory markings. The Balkenkreutze and the hollow number ”31” on both sides of the fuselage were airbrushed on with the help of self-adhesive masks.

As stated before, the engine compartment was painted with enamels, and aged with Tamiya acrylic X19 Smoke, a very useful weathering agent suitable for many applications. I also used it to accentuate selected wing and fuselage panels.

After the painting was finished, the wash was applied to provide nice depth of detail. With underlying coat of enamel paint, acrylics was a suitable medium for the wash. Several drops of dark brown color were liberately diluted with water. Then the wash mixture was applied to all external crevices, panel lines etc. The excess liquid was wiped out with a moistened rag. Applied in stages, the washing process is easy and provides perfectly controllable results.

The final step was varnishing the model with Testors Clear Satin acrylic finish.

Summarizing, this was a moderately difficult conversion project, but one that took a good deal of detailing work to complete. The final model makes a nice companion for my previously described Fw 190, and I like it a lot. The ”hi-tech” level in current kits and accessory products is really amazing, but as you can see, a degree of own skill and some scratchbuilding is still a necessary ingredient of the ultimate modelling pleasure. 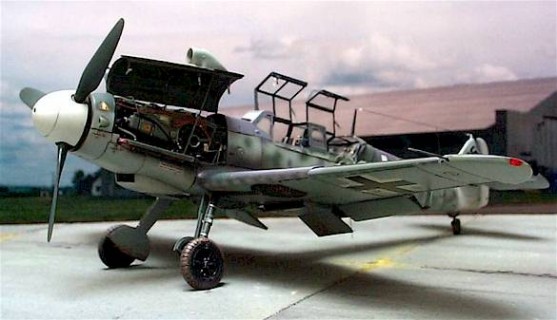 This article was originally published in IPMS Stockholm Magazine in March 2002.