It was just about time that someone had the courage to make an injection-moulded kit of this very elegant aircraft. The first impression is favourable with thin, recessed panel-lines. It is hard to believe that this model comes from the same company that made the SAAB Sk60 a few years ago.

There is a lot of parts in the kit and room between them is sparse in the same manner as the Sk60. Care is needed not to damage some of the parts. A commendable policy from Marivox is their habit of cramming in as many as possible versions of the same aircraft in their kits. There was probably not a B17 built that can’t be made from this kit. There is a choice of wheels, skis and floats as wells as parts for the target-tug version.

Parts fit very well, in some places even perfectly. The only area that needed a little filler was between wing and fuselage.

Cockpit detail is a little sparse and I can’t confirm that it is perfectly accurate. I was content with adding seatbelts from masking-tape but there is plenty more to do for the super-detail enthusiast. The navigator / tail gunner’s machine gun looks a little big but it is nicely detailed. I didn’t use the spent-cartridge chute that should be fitted to the gun. It is so large that it looks ridiculous, it actually fills half the navigators compartment. 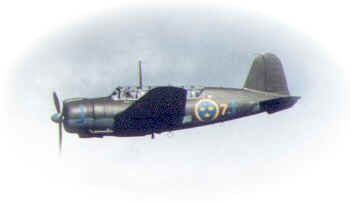 The canopy is very thin and clear and it is possible to leave the rear part open. In some kits, the canopy has been very ”foggy”. This is due to release agent from the moulds and is easily cured with soap, water and an old soft toothbrush.

The drawing is a little vague on certain aspects of the construction. For instance, the positioning of the navigators seat. Another missing piece of information is that the target tugs were unarmed, to build one of these, one have to remove the guns from the wings.

The bomb-doors are made as separate pieces which is peculiar since there isn’t any interior parts for the bomb-compartment. Anyway, the doors fit well so they are easy to fix in the closed position. 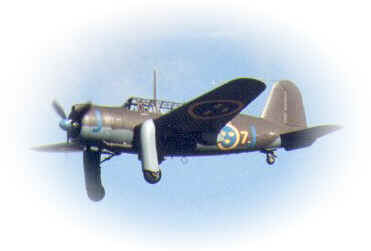 After the fuselage, the time has come to construct and install the engine. I decided to build a B17A with P&W Twin Wasp engine. The kit is simplified on this point. The B17 was built with three different radial engines, the A-version with the Twin Wasp, the B with Bristol Mercury and the C with an Italian Piaggio engine. The P&W in the kit doubles as a Piaggio for the B17C. The cowling for the B17C looks a bit funny, it’s too ”square” in the front and the diameter of the opening is slightly too small. These faults which can easily be adjusted by some careful sanding. Also, the engine protrudes far too much forward, this can be corrected by filing down the protrusion used to mount the engine.

The main gear doesn’t cause any trouble, apart from the wheels which lack the typical coarse thread pattern. Skis and floats fit very well.

Compared to Björn Karlströms drawings, the model looks very good except for the tail-length, which is supposed to be about five millimetres too long. On the other hand, compared to photos the model looks perfect and the drawings look strange so I vote for the model! Karlström’s drawings have never been known for being absolutely correct so beware!

This kit also includes what must be a record decal sheet! 16 different aircraft can be built from it, including Finnish, Austrian, Danish and Ethiopian machines. The majority are of course Swedish, on skis, wheels and floats and with the different engines. This is not a model for the one who can’t make up his mind… 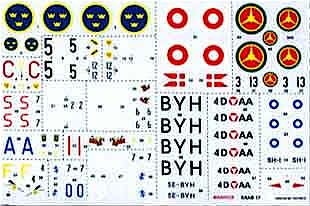 The quality of decals is excellent. Even the Swedish national insignias, which often are of dubious colour, size and appearance, are very good. One thing that is missing is stencilling which would be very useful since it is more or less impossible to get from other sources.

Conclusion: A lovely kit that needs some references for that final touch. I must admit that I fell the urge to build at least two more.

Ed: The photos in this article have been bublished by kind permission of Urban Fredriksson, the copyright owner. Urban’s Swedish Military Aviation Page contains more reference photos and material on B17 which might be of use for the modeller.

This article was originally published in IPMS Stockholm Magazine in September 1997.