In my opinion the Viggen is still one of the most 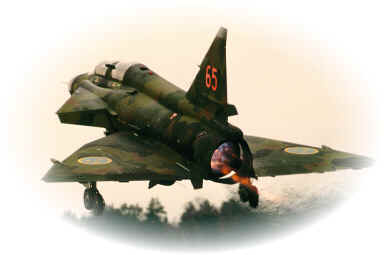 I remember one spring evening waiting for at Ronneby airport in southern Sweden for my regional flight back to Stockholm. The capacious runway is shared between civil aircraft and military division F17. The air was perfectly clear and it was just getting dark after sunset. We’ve been small-talking with a colleague standing by the fence and looking towards the airfield. Then we saw Viggens taxiing on a perimeter track. We counted eight aircraft. They rolled slowly toward the near end of the runway, and then took off, on after another.

We stood really close, and I can tell you – when these babies take off on full afterburner, the ground is trembling. The name Viggen means The Thunderbolt in Swedish, and SAAB could hardly find a better name for it’s handsome piece of equipment.

Staying in service for over 25 years, the Viggen is through constant upgrades still modern and still possesses some truly unique features. For example, it was initially constructed to operate from runways just 500 m long. To provide this capability, SAAB built-in the most powerful fighter jet engine then in existence.

AJS 37 version shown here, is the most modern of the upgrades. 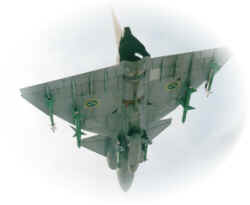 AJS stands for ”Attack, Fighter, Reconnaissance” and adds true multi-role capability. The version entered service in 1992, and 115 AJ, SF and SH 37 Viggens are planned to be upgraded in total. AJS 37 will probably remain in service after the year 2000.

The pictures have been taken during the late summer of 1998 at the military stand at Stockholm Water Festival (a huge beer party, lasting for a week, traditionally held in August every year).

Since there are many photographs, the walkaround has been divided into sections presented below. 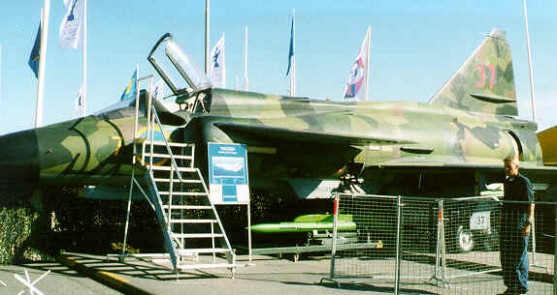 General view of the aircraft on public display at the outskirts of the Old Town in Stockholm. This machine is the instructional airframe, and although the low-level camouflage pattern is real, the numerical markings 7*37 are fictional. 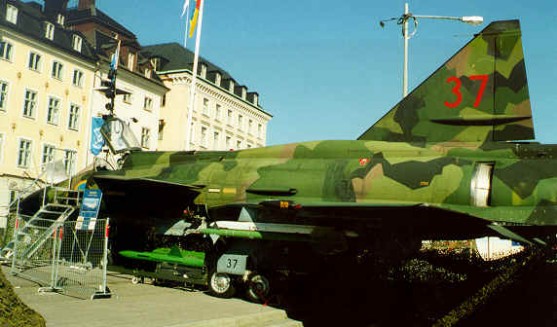 The camouflage has for many become synonymous with the Viggen, but it is actually used on other aircraft for low-level missions. The pattern is very strictly regulated, and identical on every airframe. 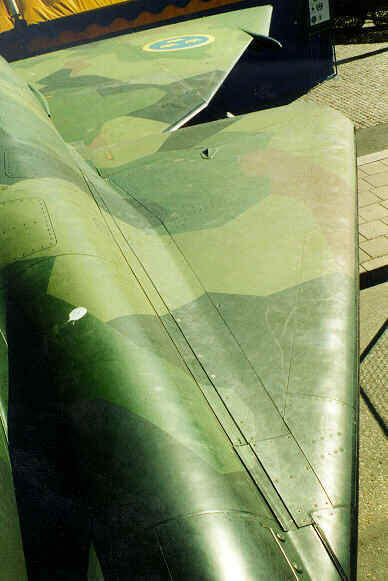 More of the camouflage can be seen here on the aircraft’s port flying surfaces. The colors are black green, dark green, light green and sand brown. The mix of these colors gives an effective concealment against terrain background, which in Sweden is often covered with forest. 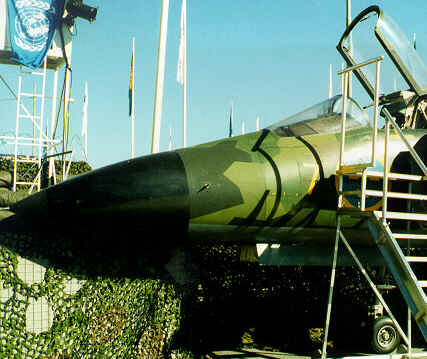 The large nose radome is painted black.This is a standard ”fighter” radome. Some AJS Viggens upgraded from earlier reconnaissance versions have different radome with forward-looking camera window underneath. 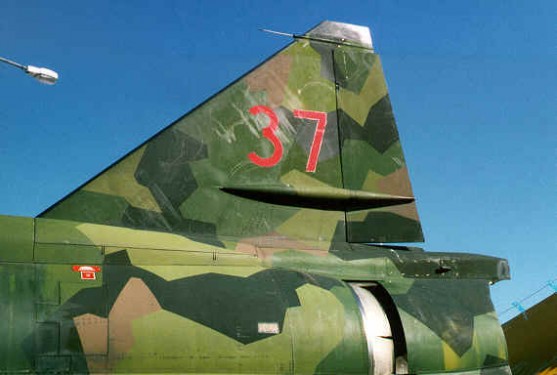 The aircraft’s fin. This view shows clearly that the camouflage is completely matt. 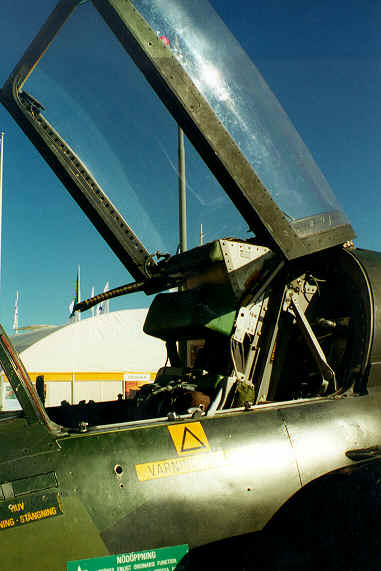 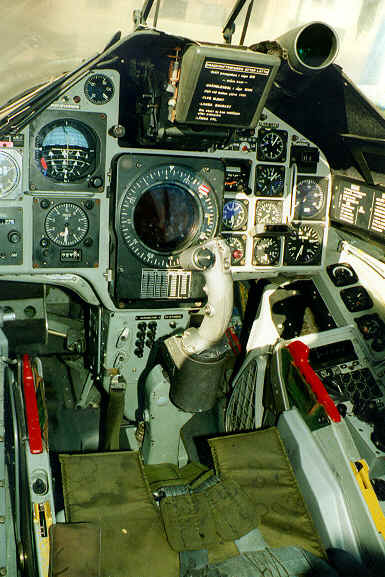 The pilot’s office as seen from the seat. 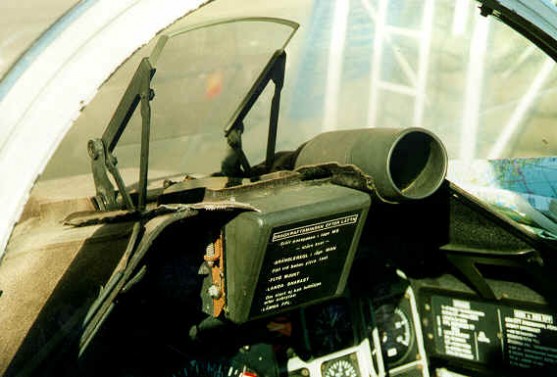 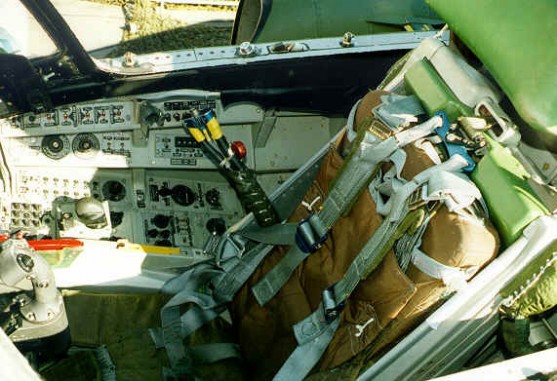 This photo shows detail of the cockpit’s starboard side panel and ejection seat.

The long fuselage spine features a number of small 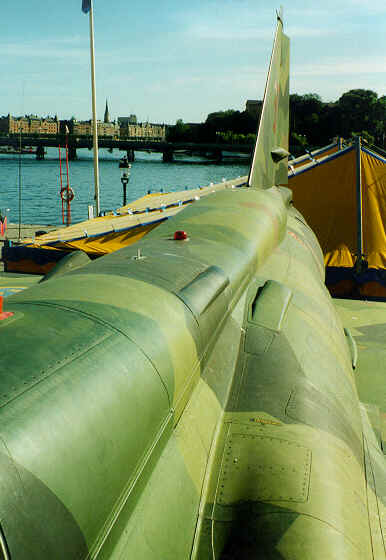 outlets. A navigation light can be seen about halfway down the fuselage. 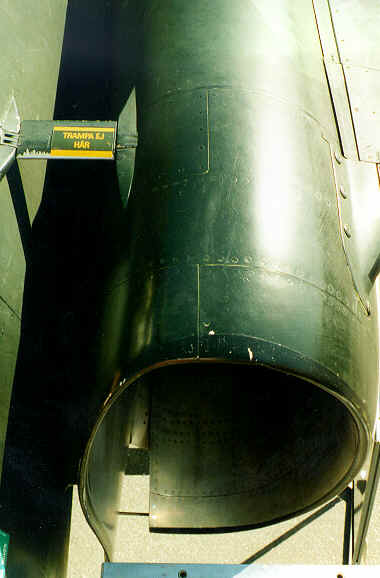 Looking from the top step of access ladder below, this is a good view of the port air intake. Interesting features are the gap in the lower lip of the intake and a supporting brace in the upper part with yellow stencil which reads TRAMPA EJ HÄR (no step here) 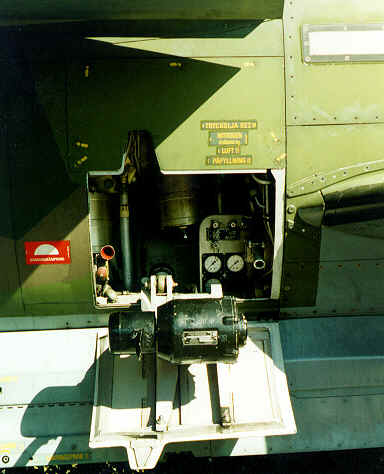 The retractable auxiliary power generator is displayed here in the open position. The hatch is situated on the port side of the fuselage immediately in front of the wing root.

Looking below the fuselage, there is an air intake immediately in front of the centerline pylon. 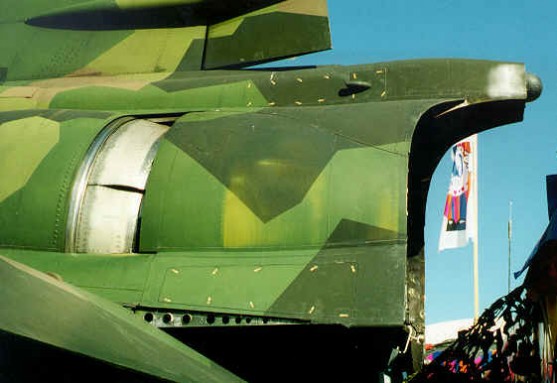 More detail of the massive engine outlet and tail. 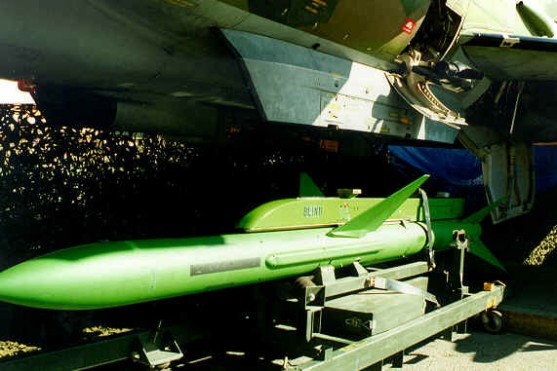 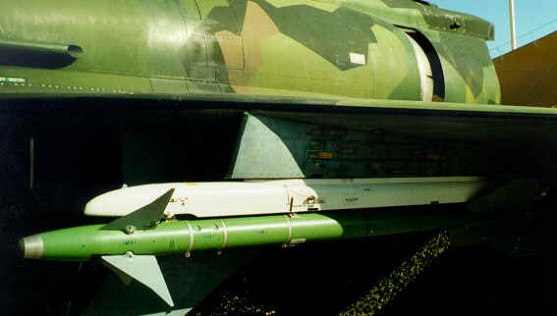 The wing-tip probe is black and carries the yellow stencil AKTAS (caution), which, strangely, is repeated upside down. 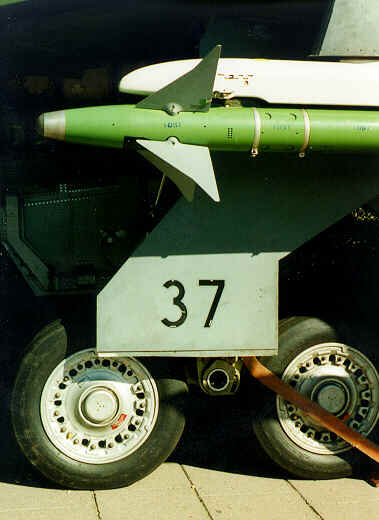 The port main undercarriage wheels and cover seen from outside. 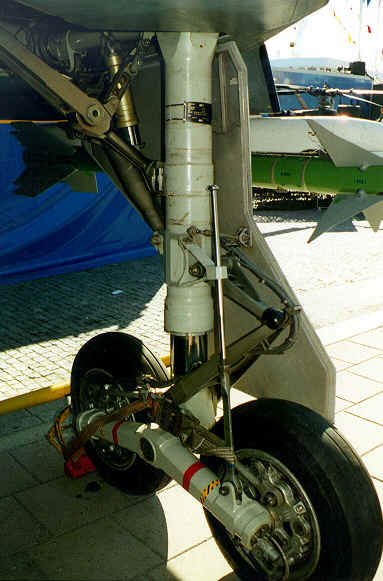 The same undercarriage leg seen from the inside. The bicycle arrangement of the main wheels is unique for the Viggen and has been used to fit the undercarriage into Viggen’s thin wing when retracted. 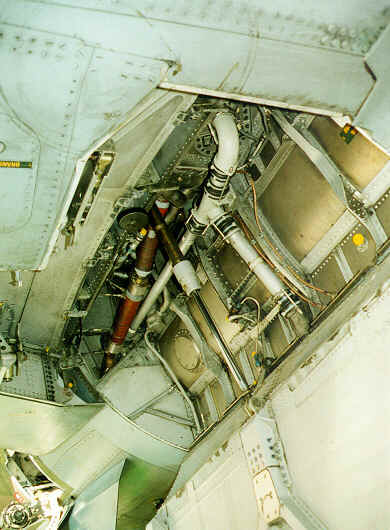 Consequently, the wheel well is really small. This is the view of the internal structure and plumbing of the port wheel well looking forward. The inner face of the inner undercarriage cover can be seen in the bottom of this picture. 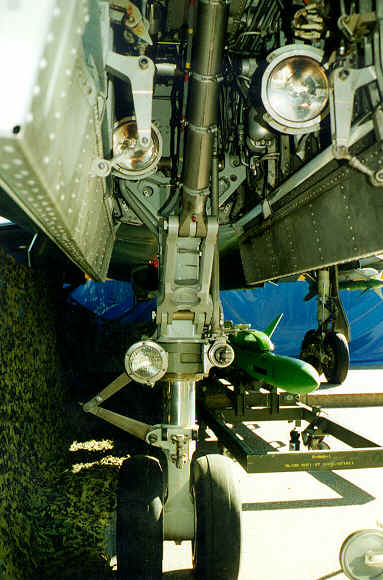 The from wheel well looks even more sophisticated, with a multitude of landing lights being a prominent feature. The front leg has a conventional twin-wheel arrangement.

This article was originally published in IPMS Stockholm Magazine in April 1998.