Affectionately nicknamed Jug, the P-47 was one of the most famous fighter planes of the World War II. Did you ever wonder why the first production version of the Thunderbolt was designated P-47B instead of -A? Well, funny enough, the massive P-47 originated from an Army requirement of 1940 calling for a… lightweight interceptor, armed by only two guns, and powered by 1,150hp inline engine. Lessons learned from the raging war in Europe soon revised required features as completely inadequate and the initial P-47 design was scrapped. Alexander Kartveli was then allowed to design an entirely new fighter of completely different proportions, allowing it to accommodate the 2,000hp R-2800 Double Wasp engine with complex turbocharging system. Same designation P-47 was retained, but the -A version remained forever connected to original ”paper” design.

The most-produced version of Thunderbolt was P-47D. Machines of early production block numbers differed only slightly from the initial production versions -B and -C, incorporating more extensive armour protection for the pilot, slight modifications of the turbocharger ducting and water-injection system for the R-2800-21 or -59. However, evolutionary improvements were incorporated through the entire production programme.

These included first wing strengthening and provision for the external underwing pylons. Later, machines from the high block numbers received an all-round vision bubble canopy and the rear fuselage spine was lowered, thus permanently removing the characteristic ”razorback” appearance of early Thunderbolts. Still later, a dorsal fin was added to offset the loss of keel surface which resulted from the above change.

Other modifications include introduction of R-2800-63 engine and a paddle-blade propeller, and further increase of internal fuel capacity.

P-47D served with distinction on all theatres of war, starting with US 8th Air Force in Europe, and 384th Fighter Group in the Pacific (which both received their first -D’s in the end of 1943), and ending well after the VJ-day. P-47D was also supplied under Lend-Lease to RAF, and a substantial number was sent to the Soviet Union.

Many pilots became aces while flying the Thunderbolt. Outstanding among these was Col. Francis S. ”Gabby” Gabreski (31 kills, the highest-scoring Thunderbolt pilot), and highest scoring USAF pilot in Europe. Other aces include pilots of the high-scoring 56th Fighter Group, Capt. Robert S. Johnson (28 kills) and Col. Hubert Zemke (20 kills). Zemke’s 56th Fighter Group became the highest scoring group in the ETO, destroying 1006 German aircraft against a loss of 128 Thunderbolts. A ratio of nearly eight to one!

The machine featured here is a preserved example of late-series P-47D as displayed in Duxford, England. 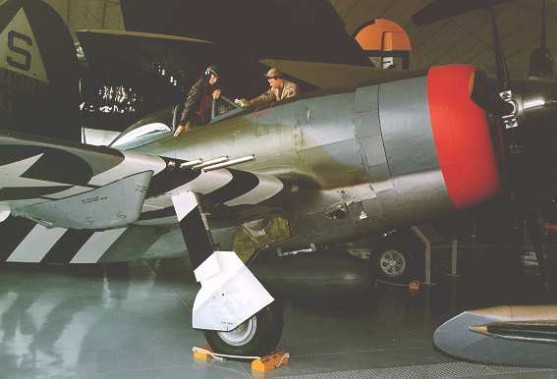 General view of this beautifully preserved Thunderbolt shows some external features characteristic for the late-production D model. These include underwing pylons, bubble canopy, but still retaining Hamilton Standard propeller (without cuffs). This, in author’s opinion, places the displayed specimen somewhere in the P-47D-25RE to P-47D-27RE range, but perhaps somebody knows better and would like to verify this… Photo: Magnus Fridsell 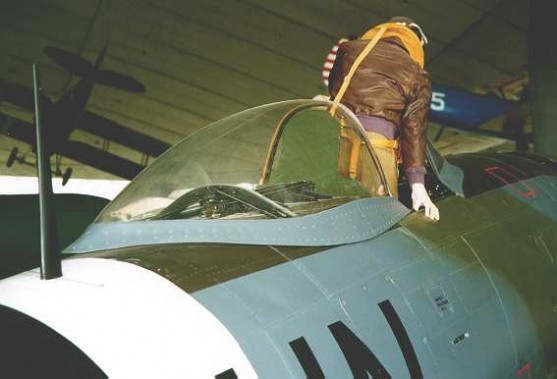 Details of the bubble canopy and the sliding mechanism. Republic based it’s construction on that used on the British Hawker Typhoon fighter. Photo: Magnus Fridsell 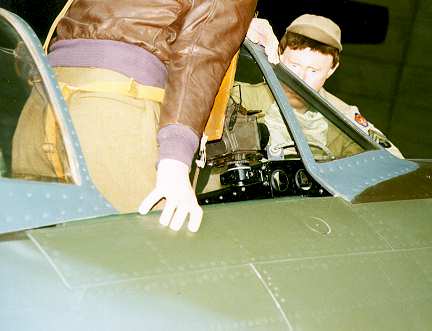 A close-up from the same angle shows detail of the armoured windscreen and a prominent reflection gunsight behind it. 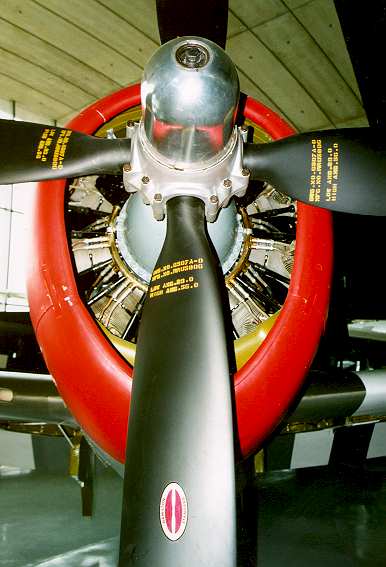 To utilize the engine’s power, Thunderbolts we equipped with several different types of propellers, but all of them of huge 3,7m diameter. This one is a Hamilton Standard paddle-blade type with rounded hub.

The oval Hamilton-Standard logo can be seen in the middle of the lower blade.

This view also shows front detail of the R-2800 engine 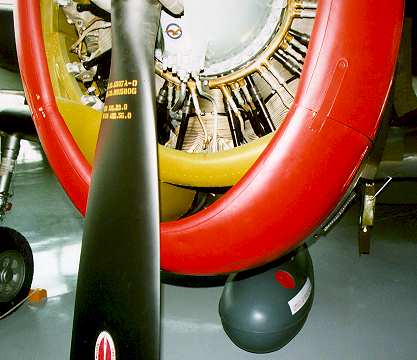 Lowering the line of sight, this is a main air intake for the turbocharger integrated into the lower cowling.

Of note is also centerline fuel tank visible below the fuselage, and a red-colored filler cap on it’s starboard side.
Photo: Magnus Fridsell 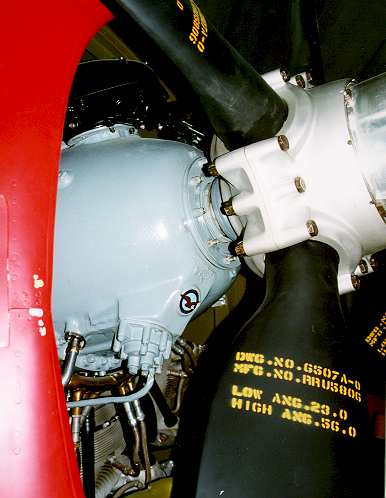 Another close-up of engine crankcase and propeller variable-pitch gear.

This shot from behind of the cowling reveals 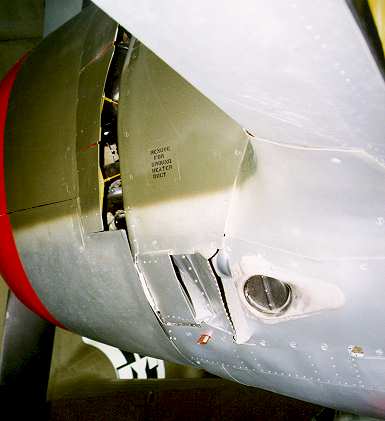 detail of the cowling gills.

The round outlet below front wing root is a valve used to dispose of excessive exhaust pressure from the turbocharger system. 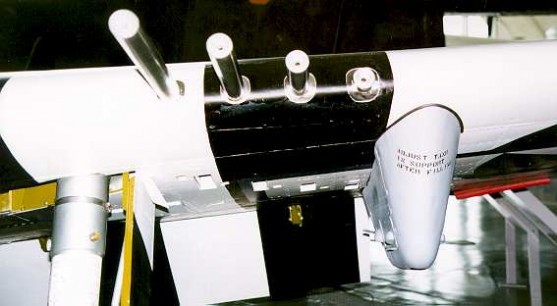 The ”sting” of P-47 consisted of eight 0.5″ machine guns. This shot reveals the placement of gun barrels – as can be seen, they form a straight line parallel to the ground, and not to the wing’s leading edge. Misplaced gun barrels are common, albeit fro many modellers unimportant, error among many scale kits of the Jug. But, beware of those contest judges… 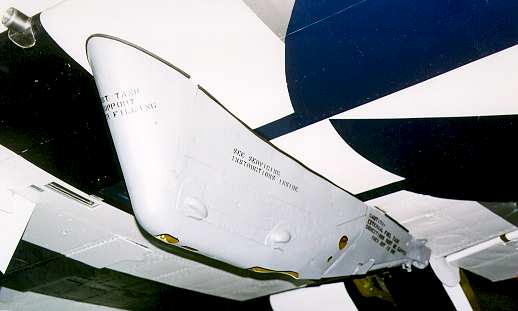 The underwing pylon could be used to carry bombs, rocket pods or external fuel tanks. This particular example lacks the braces used to hold the equipment in place, these used to protrude from the two openings visible in the lower part of the fairing. Photo: Magnus Fridsell 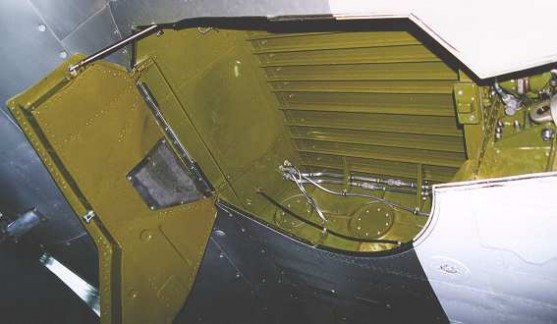 Wheel well of the aircraft were exceptionally tidy in layout, with only a minimal amount of plumbing.
Photo: Magnus Fridsell

To allow for the propeller clearance during take-off 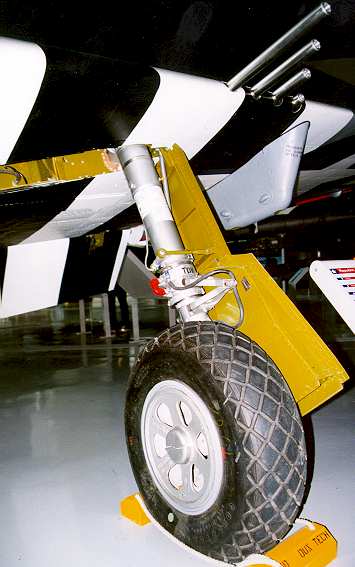 and landing, Republic designed an undercarriage with very long legs.

These in turn wouldn’t fit into the wing, so a special oleo-pneumatic gear was employed which actually shortened the legs during retraction process.

The starboard leg visible here is at it’s shortest length – of course, the museum example lacks hydraulic pressure! Still, even period photos show that in-service Thunderbolts also tended to ”sink” down when parked.