An Afternoon Kit from Tamiya 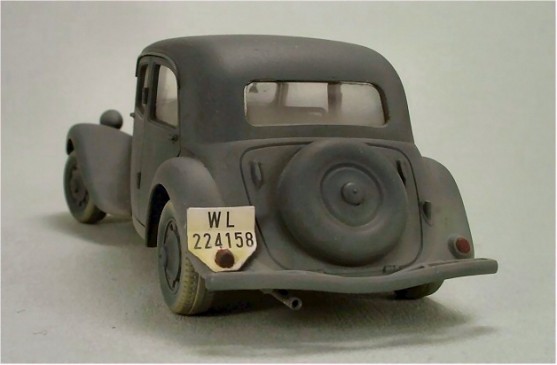 Like most modellers I was initially surprised to see Tamiya releasing a series of AFVs and softskins in 1/48th scale, together with figure sets and diorama equipment. All the more surprising was Tamiya’s decision to produce subjects that were not just scaled-down versions of their 1/35th scale series. So it was a nice to see the Citroën 11CV being released, as it caters for diorama possibilities geared towards both vehicle and aircraft subjects.

As I acquired my Citroën a simple scene involving the car, an aircraft and some personnel was just what I had in mind. As the aircraft of my simple scene was going to be built out of the box, I decided to go along the same lines with the Citroën. No modifications or extra detailing would be carried out.

Tamiya provides four options for painting and marking your Citroën; two of them are French, a civilian vehicle and one used by the French Army. The other two are German cars from either Wehrmacht or Luftwaffe. Alternate parts only go as far as choosing between two different headlight styles for the German and French versions. Other than the headlights the main difference of the various versions is the colour of the body and the amount of chrome. The civilian car has the full chrome treatment while in the other end of is the Wehrmacht example with an all-grey affair that has all chrome details painted over. I went with the Luftwaffe version, which meant that just a little chrome around the windshield and the grill would have be painted. 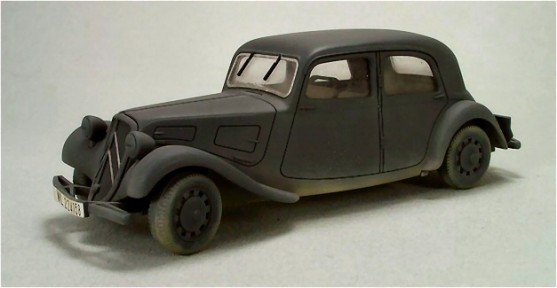 Considering the small number of parts and limited options my story on construction is really not that exciting. This model practically builds itself. My knowledge on the real car is very limited but Tamiya has – as usual – done an excellent job on the engineering overall quality of the kit components. The only complaints I have are the doors being moulded shut and the absence of a simple rear view mirror on the drivers side.

The only modifications made was turning the front wheels, which simply required turning them when they were glued to their axles, and drilling out the end of the exhaust pipe.

I had the model ready for painting in less than 1,5 hours, a new record for me when it comes to building a 1/48th scale model. If there is such a thing as the ”weekend kit”, this one qualifies in the ”afternoon” class!

To make painting easier I kept the model in three basic components: chassis, front fenders with instrument panel and finally the body. 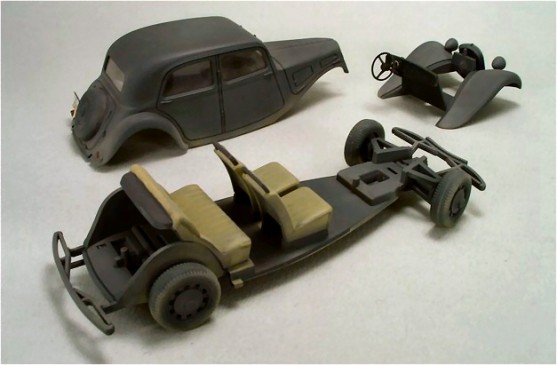 The entire model was airbrushed with a base coat of Tamiyas XF-63 German Grey. As this is a car model I mixed in a few drops of X-22 Clear to give the body an ever so slightly satin finish. I finished off by misting a darkened mix of the base coat over the entire model to give some tonal variation.

The seats were then painted in XF-57 Buff and once dry a thin wash of a suitable Vallejo brown was applied to get away from the single, solid colour. The steering wheel and dash board were hand painted in Vallejo 057 Black. The decal for the instrument panel was applied and the interior was ready.

After hand painting exterior details using various Vallejo colours I applied the decals for the registration plates and called this stage done.

For this project I decided to limit weathering to a light layer of dust and mud as typically seen during summertime. An application of heavily thinned Tamiya XF-57 Buff did the job. 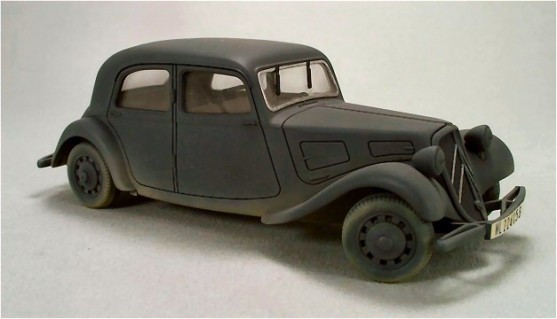 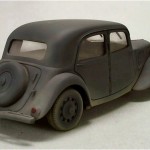 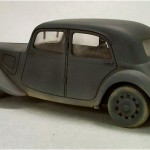 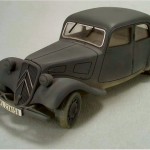