artwork and photos by Ricardo Dacoba
text by Martin Waligorski

For a brief moment in the early 1950s, Argentina stood at the forefront of aviation development. The Pulqui series of jet fighters was a result of a bold undertaking envisioned to push the Argentinean industry into a completely new era. Alas, it was not to materialize.

The name Pulqui (meaning Arrow in the local Mapuche language) was actually used for two different aircraft, which had absolutely nothing in common except for the jet propulsion. Here’s a brief history of these two projects.

Immediately after the end of World War II, the Argentinean government opted for a rapid expansion programme of its Air Force. Under the government initiative, the Fábrica Militar de Aviones in Córdoba (then called Instituto Aerotécnico) was encouraged to seek foreign contacts for the planned development of domestic jet aircraft.

In 1946, the factory commissioned the famous French aircraft designer Émile Dewoitine (the same who gave his name to the French Dewoitine factory, and escaped from France to South America due to the German invasion). Dewoitine designed the first ever Latin American jet fighter, the IAe27 Pulqui I. The development progressed quickly and the prototype aircraft took off for the first time on August 9th, 1947 in the hands of Captain Osvaldo Weiss.

The single IAe.27 Pulqui I was finished in overall brilliant red colour.
The aircraft carried no markings except for the Argentinean roundels in six positions
and a small fin flash.

It soon turned that Dewoitine’s unquestionably wide experience with aircraft construction was not quite enough for the revolutionary new propulsion and the new aerodynamic challenges. His fighter was an all-metal tricycle-gear construction, but of conventional straight-wing design adorned by the unmistakably Dewoitine-shape fin that seemed a bit out of place on the high-speed airframe. Power was provided by a single rear-mounted Rolls-Royce Derwent engine.

During test flights the aircraft proved severely underpowered and had low overall performance. Coupled with complexity of maintenance and operation, the programme was abandoned and Dewoitine returned to Europe.

The Argentina’s Air Force was not put off by this misfortune but continued to seek for another aircraft. 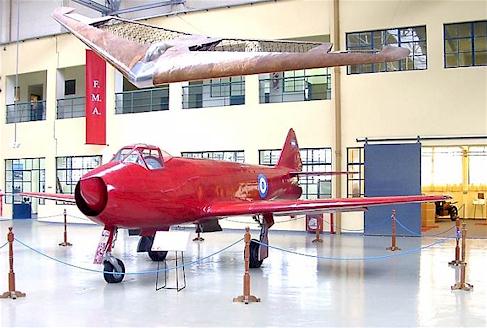 Pulqui I preserved in the Argentinean Air Force museum in Buenos Aires.
Of note is also Horten flying-wing glider suspended from the ceiling..

In the post-war world, many qualified German personnel found their way to Argentina. The Argentinean government was quick to approach the arguably most talented of all German aircraft constructors, Dipl. Ing. Kurt Tank. Famous for the immortal Focke-Wulf Fw 190 / Ta 152 series of fighters, Tank was not slow to pick the chance of starting his professional life again. He managed to collect a large team originating from the Focke Wulf design bureau and established himself in Córdoba in 1947.

Kurt Tank’s assignment was to design a far better airplane than the Pulqui I. It had been decided from the beginning that the new fighter would be named the Pulqui II. For that Tank was very well prepared for the job. From the late 1944, his team had been working on a 2nd generation jet fighter for the Luftwaffe under the designation Ta 183 Huckebein. It was an advanced jet, extraordinarily compact in size and aerodynamically clean, sporting a 32º swept wing, and accomodating a Heinkel He S011A jet engine which would bring it to calculated maximum speed of 967 km/h at an altitude of 7000 meters.

Equipped with the invaluable aerodynamic research data from this project, all Tank had to do was to finalize his ideas and produce a prototype aircraft. What Tank didn’t know was that the very same data were simultaneously worked upon in the Soviet Union for development of an aircraft that would eventually become MiG-15.

Like the MiG-15, the chosen powerplant for the Pulqui II was Rolls Royce Nene II. The Nene was more powerful than the He S011A but required a redesigned new fuselage with a larger cross-section due to it having a centrifugal rather than axial compressor. The resulting product was the IAe.33 Pulqui II.

The new fighter was a real beauty. The high-mounted negative-incidence wings were swept back 40º, even more than the Ta 183. The long fuselage was perfectly circular in section with the engine buried inside right at the center of gravity. The airframe was finished off with a graceful swept-back T-shaped tail. The pilot sat in a pressurized cockpit under a teardrop canopy. Armament would include four fuselage-mounted 20mm cannon. Contrary to the previous Dewoitine design, many elements incorporated into the Pulqui II were totally new in the fields of aeronautical construction, placing the Argentinean aero industry amongst the most advanced during those years.

Nothing can better emphasize the technological difference between the Dewoitine and Kurt Tank designs than these two cockpit photos. Pulqui I to the left, Pulqui II to the right.

The first prototype – IAe.33 Pulqui II nº 1 – was actually an engineless glider, with the purpose of studying the aerodynamic behaviour of the airframe. Like all of his previous designs, it was Kurt Tank himself who test-flew the glider. After a series of tests, Tank arrived to the conclusion that the airframe showed no design flaws, and the construction of the powered prototype was ordered.

The first flight of the IAe.33 Pulqui II nº 2 took place on 16 June, 1950 with Osvaldo Weiss at the controls. The second flight which took place three days later was entrusted to ex-Focke Wulf test pilot Behrens. Kurt Tank also completed a good number of the test flights undertaken during the following weeks. The new aircraft proved successful in most respects, but like its ”cousin” the MiG-15 it displayed some handling difficulties at the extremes of the flight envelope. Lack of operational range was another problem which wasn’t solved until the fifth prototype.

Unlike the earlier prototypes which are believed to be painted silver with red trim, the nº 5 was white overall white with red arrow along the fuselage. The red colour also extended to wingtips, top of the fin and the entire horizontal plane. This aircraft had a modified wing as described in text.

While the testing program with nº 2 was taking place, 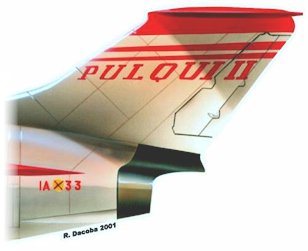 two other prototypes were built, the Pulqui II nº 3 and nº 4, which were incorporated into the flight testing program in 1952. Disaster struck during a visit to the Cordoba factory by president Juan Domingo Peron, when Behrens crashed in the nº 3 during a demonstration flight and was instantly killed.

The last prototype, nº 5, was a modified version to increase the operational range and wore a designation Pulqui IIe. It featured a reinforced ”wet” wing containing two integral fuel tanks.

Meanwhile, the economic crisis that hit Argentina beginning in 1953 forced the slowing down of armament development programs. The high-cost high-profile Pulqui II project was halted, first temporarily, but the fall of Peron administration in 1955 meant it was never to recover. Kurt Tank moved on to another projects, first trying to return to Germany but then moving on to India. Most of his team ended up leaving Argentina to find work in the United States and other countries. Kurt Tank himself was not to return to his life and work in Germany until 1970s, where he died in 1983.

Today, the sole Pulqui I and the Pulqui II nº 5 are preserved at the Argentinean Air Force’s Museum in Buenos Aires. 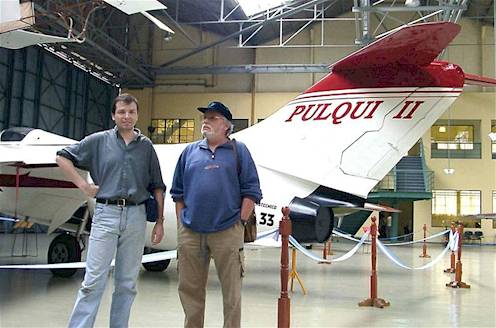