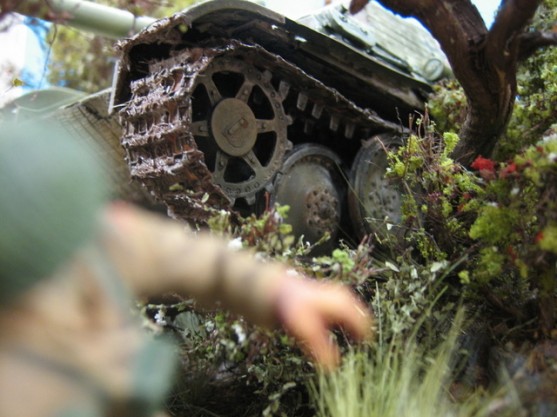 The SdKfz 173 Jagdpanther was probably the most formidable tank destroyer of the war. Built on the Panther tank chassis, it combined heavy armour, low silhouette and the hard-hitting 88 mm Pak 43 gun. This combination enabled it to engage and destroy any type of Allied tank.

Around 392 Jagdpanthers were produced in 1944 and 1945. They equipped heavy antitank battalions and served mainly on the Eastern Front, although significant numbers were concentrated in the West for the Ardennes Offensive. They were first encountered in the west in very small numbers late in the Battle of Normandy, where the German 654th Heavy Antitank Battalion (schwere Panzerjäger-Abteilung) deployed about 12 Jagdpanthers against British units.

My 1/35 diorama shows a Jagdpanther of the 654th Heavy antitank battalion in Normandy, 30 July 1944. The Jagdpanther is moving at speed through a bocage occupied by reconnaissance troops of the British 2nd Army only minutes before the encounter with the 6th Guards tank brigade. 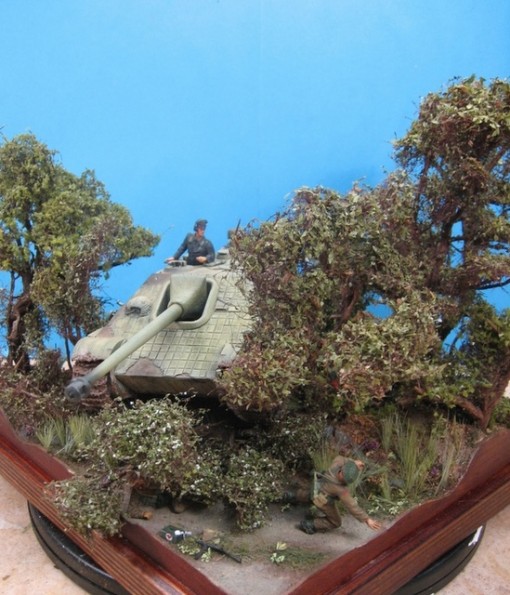 A few words about the background of this scene. Operation Bluecoat was an attack by British Second Army conducted between from 30 July 1944 to 7 August 1944. The geographical objectives of the attack were to secure the key road junction of Vire and the high ground of Mont Pinçon. Strategically, the attack was made to support the American exploitation of their breakout on the western flank of the Normandy beachhead. 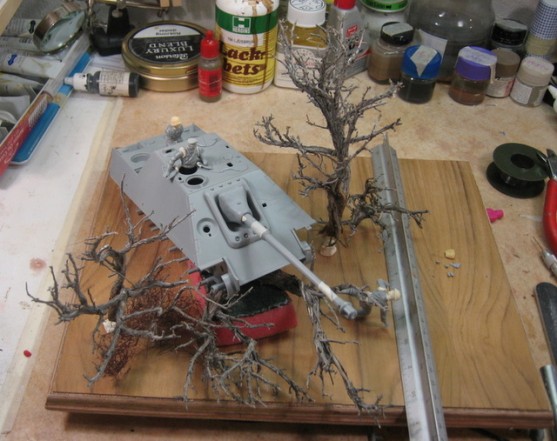 I always begin my diorama projects with a mock-up, which I prefer to sketching on paper. Being three-dimensional, the mock-up allows to assess the composition as seen from different angles. It also allows to a degree of interaction, experimenting freely with positioning and angles of the various elements. Note how the tank commander’s body leans to the left. This movement is balanced by his right arm being straightened over the hatch. The figure of escaping English soldier is intentionally positioned rather extremely off-balance to create the sense of urgency and movement. What a nightmare would be to stumble and fall in such moment! 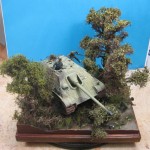 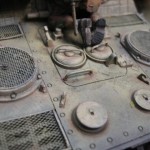 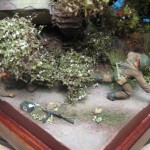 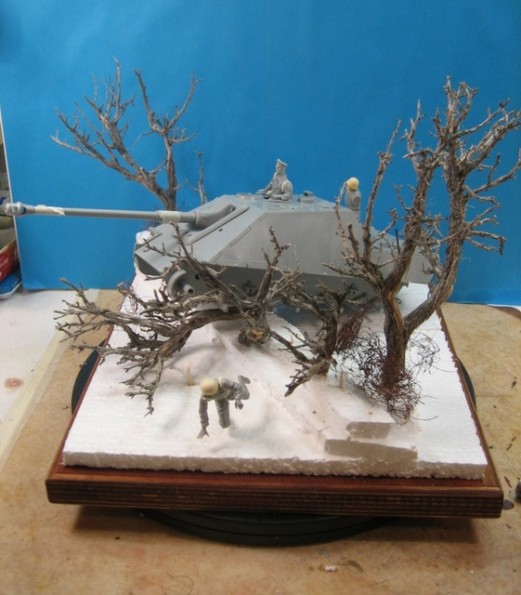 Construction begins with styrofoam. The trees are ready items from Sweetwater Scenery. 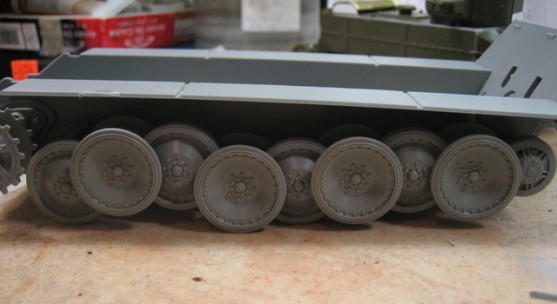 The next logical step was adjusting the suspension of the Jagdpanther to the shape of the terrain. I have simply drilled the holes in the hull where the torsion bars should be, and affixed axles from steel wires in blobs of Milliput. The result was very good and steady. 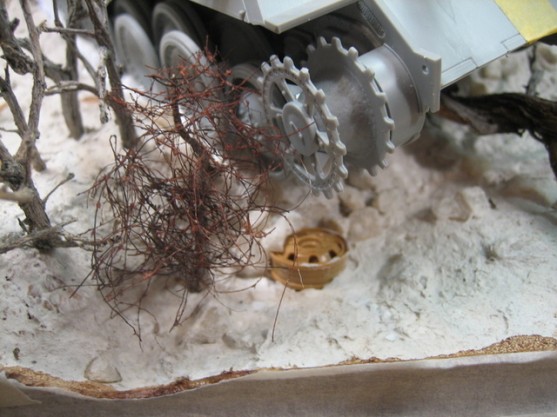 I continued shaping the base with plaster of Paris, papier-mâché, stones and sand. In French Bocage Country, the core of the hedgerows is often a stone wall. This had to be added, with stones and debris evident under the drive wheels of the Jagdpanther. 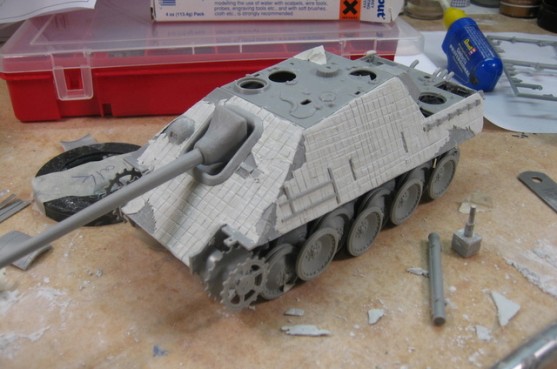 Now was the time for a layer of Zimmerit on the Jagdpanther, followed by individual track links. A time-consuming and not particularly entertaining part of the project. The excessive wear and tear to the Zimmerit coat will witness that this Jagdpanther previously passed more than one Bocage … Also, the groundwork received its base coat of red-brown at this stage. 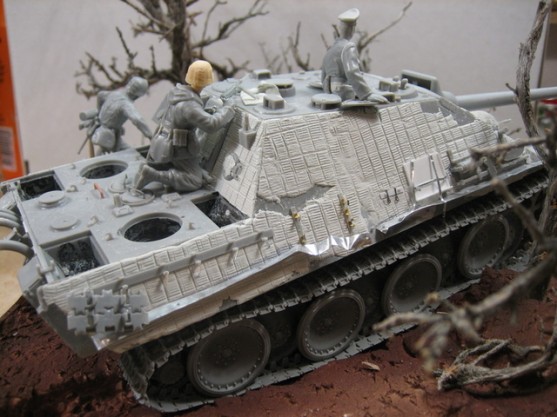 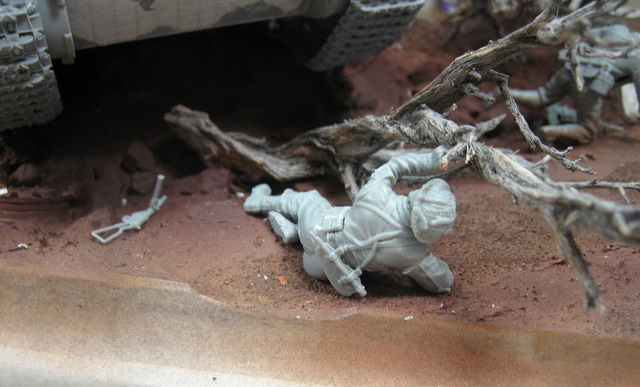 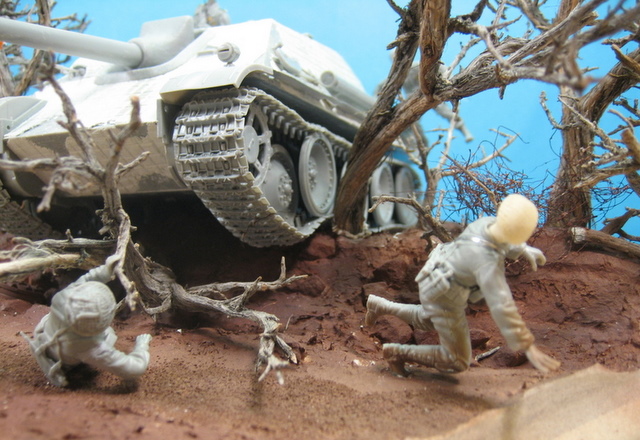 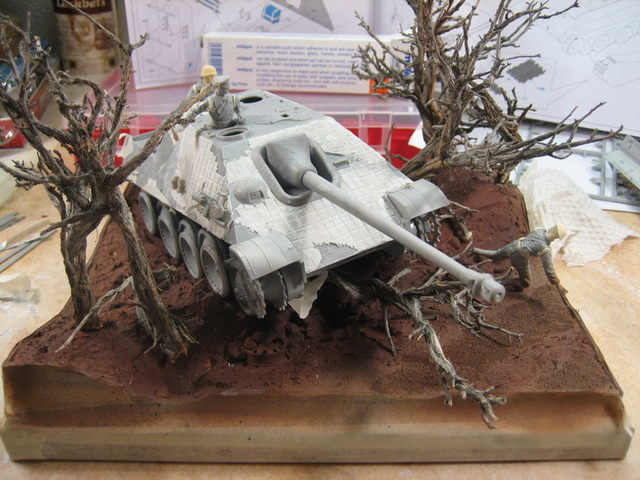 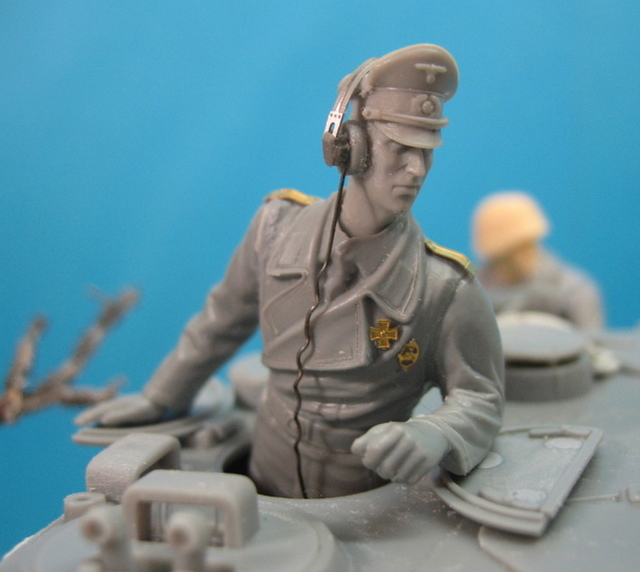 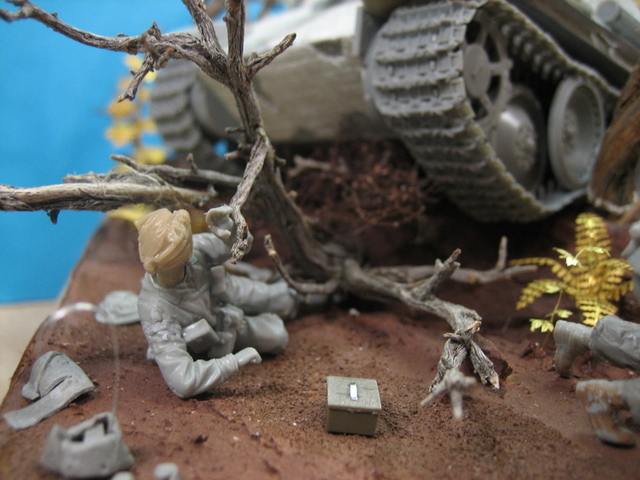 In the next step I finished forming and detailing the figures. Note that additional figures have appeared since the first mock-up, both to strengthen the sense of action and to incorporate multiple stories in the scene for added interest. At this stage some final adjustments have been made. The lying British infantryman will be pinned under the tree branch. His helmed was thrown aside, the head wrapped with bandage and his personal gear spread around. 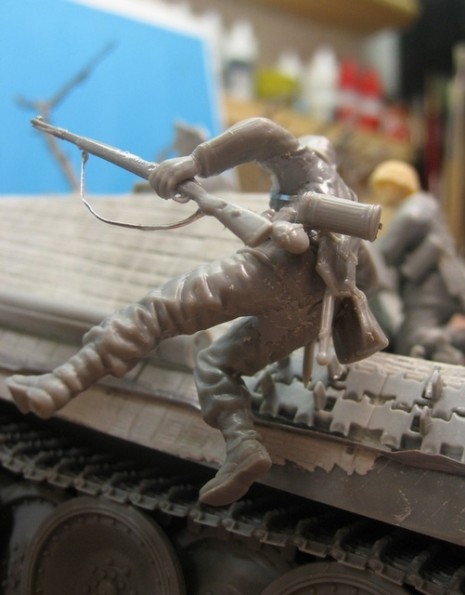 The jumping German got more ”wind” in his clothing. To get the movement of this figure right, my wife gave me the demonstration jumping from the coffee table with handbag on the shoulder. A wonderful source of inspiration! 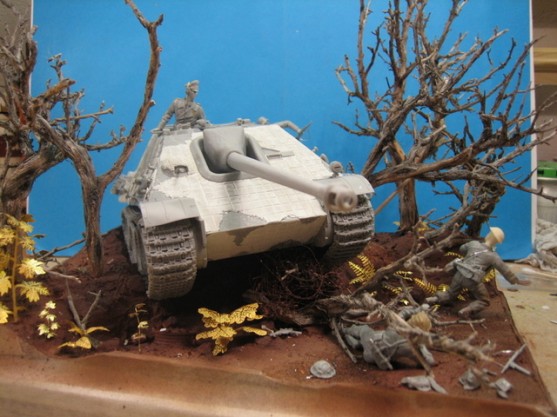 The photoetched ferns and other ground foliage added next came from Scale Link and look very realistic indeed, especially the smaller ones. The large plants are so obviously flat that they will have to be filled for more bodily appearance. 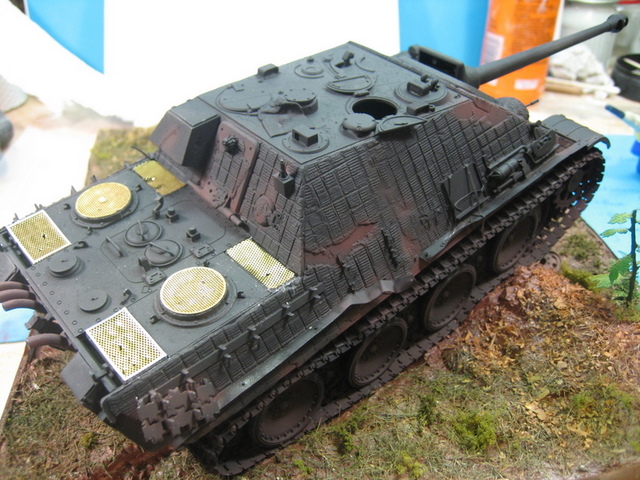 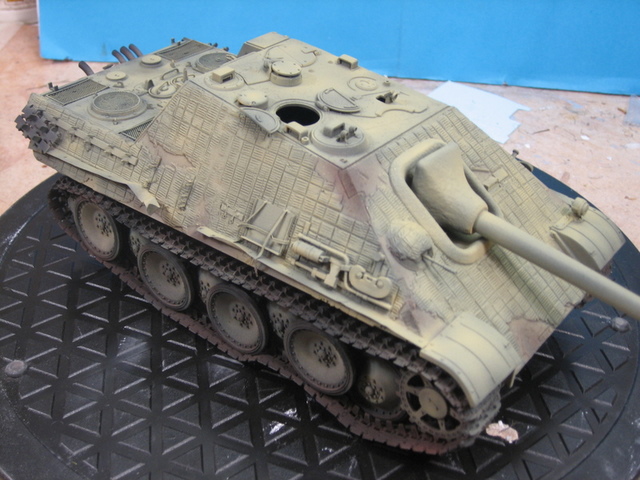 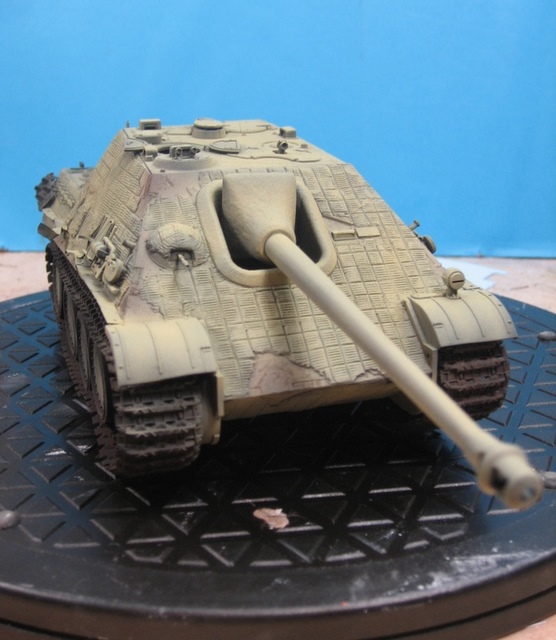 More airbrushing of the vehicle and the ground followed. Also, the figures received their basic colours at this stage. 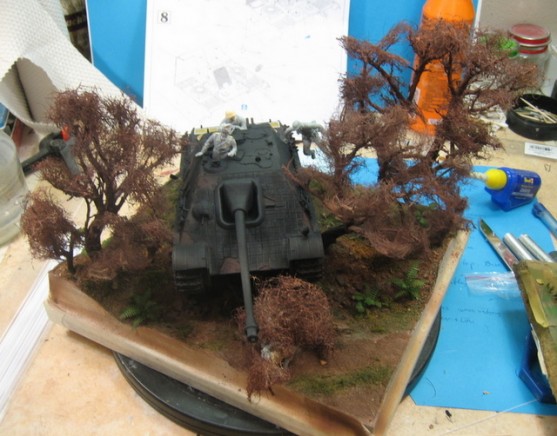 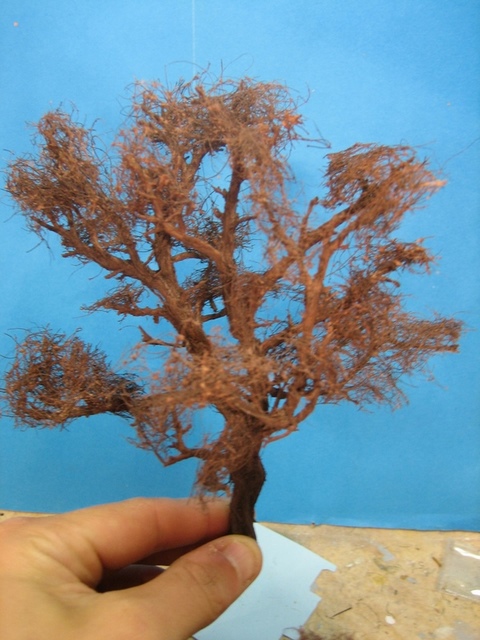 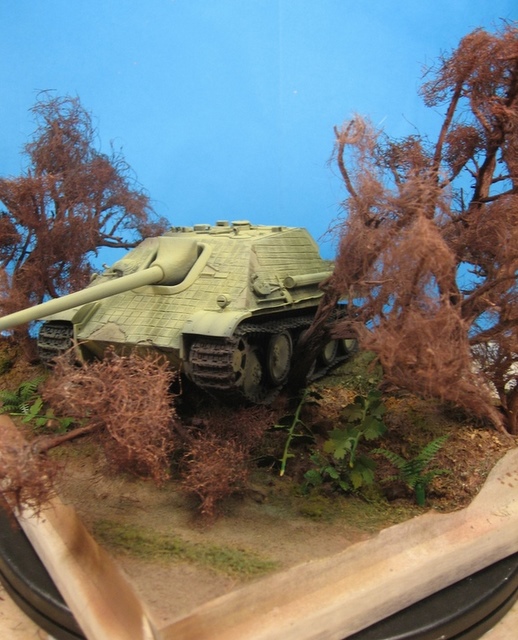 The trees are always tricky to get convincing. Here they are, with ”rubberized horse hair” acting as smaller branches. Painting began with pre-shading with black followed by brown primary coat, paying attention to leave darker shades closer to the ground and roots. The trees were later dry-brushed. 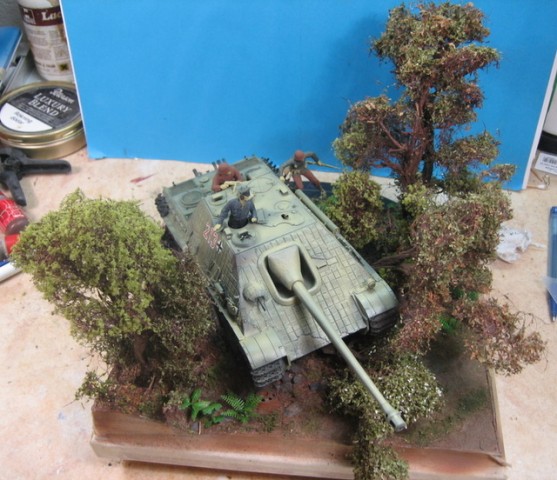 Lastly, the leaf work was airbrushed in shades of green and yellow followed by semi-gloss clear coat. 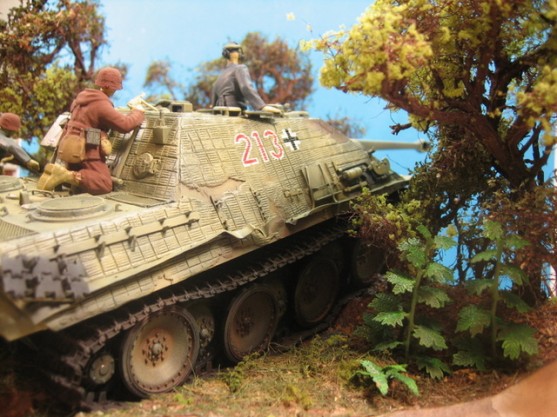 After some additional painting, shading, washing, dirtying and highlighting in too many stages to be followed in detail, the diorama was ready. I still deliberated if the lying wounded soldier is not too obliterated by the tree covering him. In the end, I left him as it was and let the surrounding items indicate to the spectator that something more was hiding underneath. 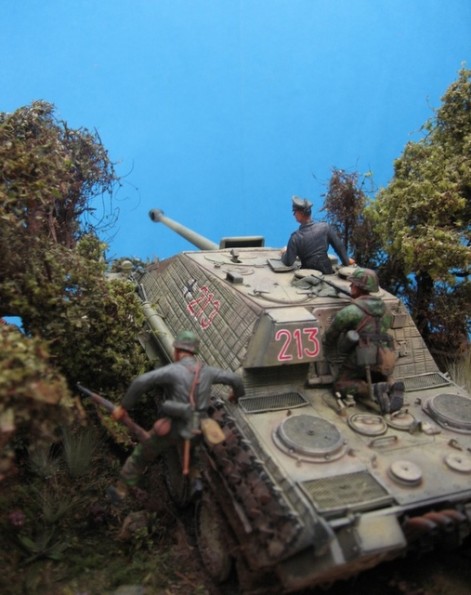 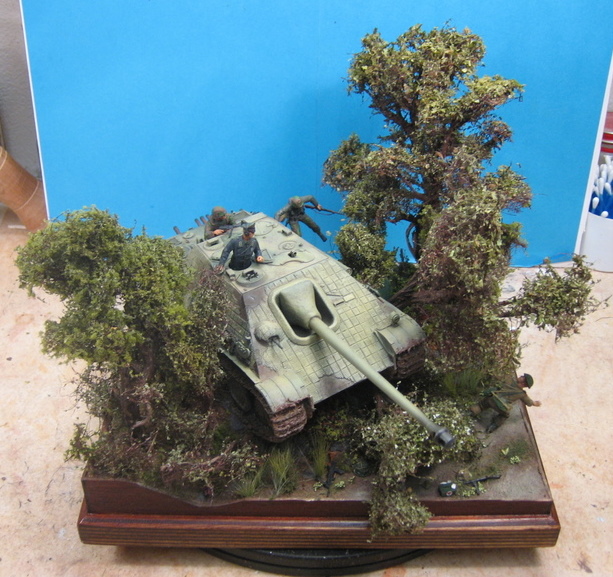 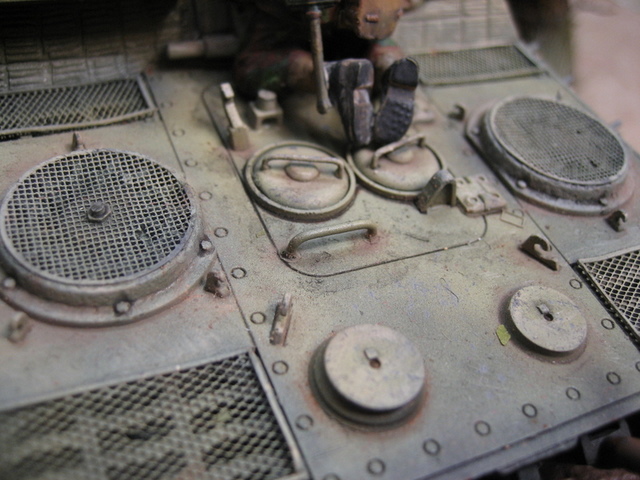 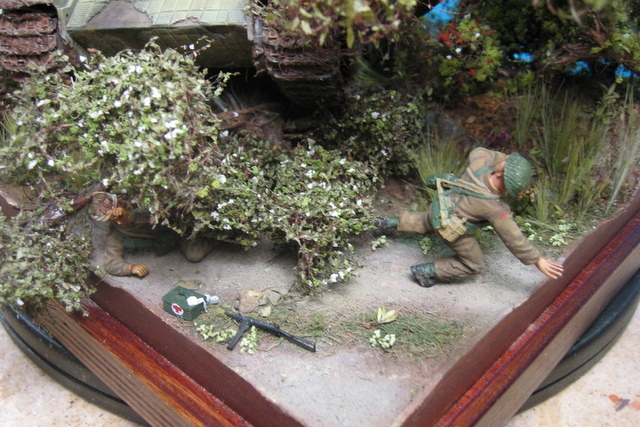