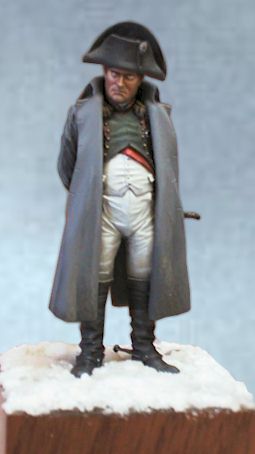 Napoleon Bonaparte, a French general, First Consul, and emperor of the French, is still one of the most celebrated personages in the history of the West. His revolutionary influence over warfare, military organization and training is too widely known to repeat it here.

Napoleon is often portrayed as a power hungry conqueror. An interesting thing is that Napoleon himself denied such intentions. He argued that his intent was to create a federation of free peoples in a Europe united under a liberal government. In the states he created, Napoleon granted constitutions, introduced law codes, abolished feudalism, created efficient governments and fostered education, science, literature and the arts. However, it cannot be denied that the emperor tried to achieve all this by concentrating all power in his own hands.

Andreas Bennwik picked this 54mm figure of Napoleon Bonaparte from Andrea Miniatures as his modelling subject. The finely sculpted face of the figure seems to reflect the sophisticated nature of the real person. As can be expected from this manufacturer, the standard of moulding and overall detail is very high. 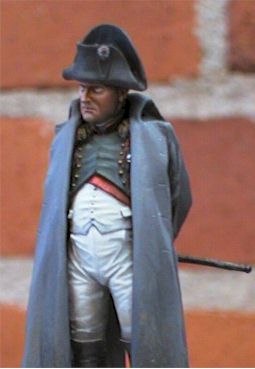 The snow-covered base suggests the ultimate faith of Napoleon’s military career: the winter of 1812 in Russia.

This article was originally published in IPMS Stockholm Magazine in May 2001.