With Focus on the Swedish Air Force Service

The Hercules has turned 50! On August 23 1954, test pilot Stan Beltz pushed the four throttles forward and YC-130 53-3397 took to the air for the first time after a remarkably short (855 ft.) take-off run. Together with his three-man crew he landed 61 minutes later at Edwards AFB. The two prototypes were the only Hercules aircraft to be built at Burbank in Californa, all aircraft has since then been built at the Martin facilities in Marietta, Georgia. The first Marietta-built aircraft took to the air less than one year later, in April 1955.

The Hercules in Sweden

The first Hercules to arrive in Sweden on March 4, 1965 was C-130 E1 serial 4039, it got the Swedish Air Force serial 84001. Initially it was leased from Lockheed but in September 1965 it was bought by the Air Force, receiving fin number 71. This means that Sweden was the first air force in Europe to operate the Hercules. 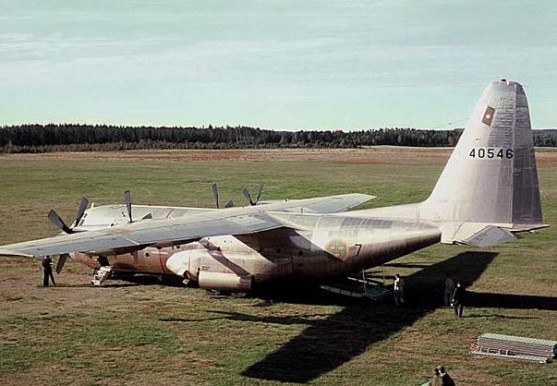 84001 in 1965 while it was leased from Lockheed, still with its USAF registration on the fin.
Photo by Åke Söderberg.

Since 1965, seven more have arrived making the total population eight aircraft all serving with the air transport unit based at F7 AFB at Såtenäs. The second aircraft to arrive came in May 1969, the third in November 1975 and the fourth in March 1981. The last four all arrived in one batch, in May 1981. The two earliest aircraft were E-models while the rest have all been H-models. During the years, all aircraft have been upgraded to H standard (more or less!). Other significant changes are new engines for the whole fleet and for 844 to 848 an extensive early warning and electronic warfare system. The most recent development involves only one aircraft, 842. This will be modified to a tanker aircraft, allowing JAS 39 Gripen to refuel in flight. Work started late 2003. For the future, a thorough avionics upgrade is planned for 2008 so we will probably see the Hercules fly for many more years!

Some of these aircraft have lived fairly adventurous lives. They were intended for military airlift but many have spent considerable time in human relief operations far outside the boundaries of Sweden. The first to go abroad was 84001, it was leased by the Swedish Red Cross for operations in Biafra in 1968. For a short time, it was registered as ”SE-XBT” and painted white with prominent red cross markings instead of natural metal. Since 1968, the Swedish Hercules aircraft have been involved in UN operations in Biafra, Angola, Eritrea/Ethiopia, Pakistan, Afghanistan, Bangladesh, Namibia, Saudi Arabia, Sarajevo, Somalia and maybe a few more countries! 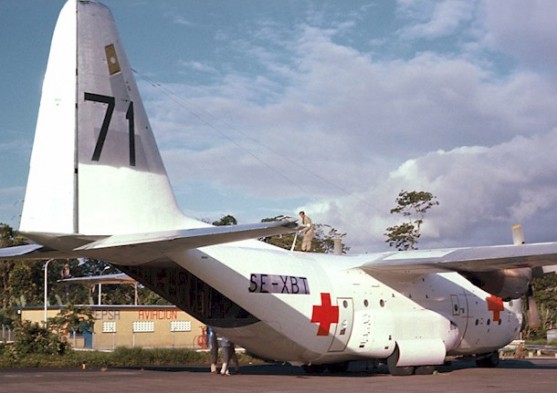 84001 in temporary civilian markings as ”SE-XBT” working for Swedish Red Cross in Biafra in 1967.
Photo by Åke Söderberg.

Old 84001, since 1980 with fin number 841, is the great artist of the Hercules fleet. It is the aircraft usually used for the Hercules air show routine. An unique feature is the part of the display where the aircraft is flown on the inboard engines only. Another spectacular treat are over-the-vertical turns and tactical landings, the display routine have been the high point of air shows all over Europe. 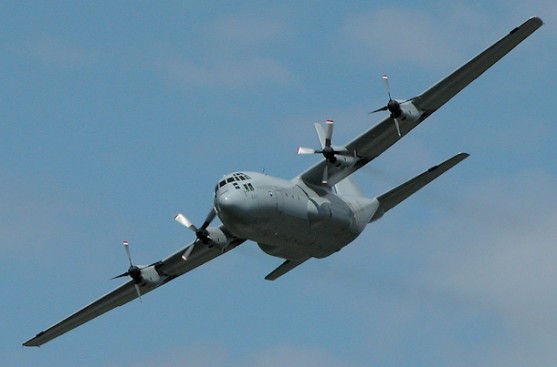 843 pulling its favourite party trick: Turning sharply with outer engines closed down!
Photo by Andreas Stöckl taken at Zeltweg in Austria in 2003.

Camouflage and Markings of Tp 84s

84001 and 84002 were flown in natural metal until about 1975 when they were repainted in green with grey lower surfaces. This lasted until the early 1990s when all aircraft were repainted in a darker green with less prominent markings. The next major change came in the late 1990´s when the worldwide low-viz trend finally caught up with them! Today all eight are low-viz grey overall with grey markings.

An excellent source for detailed profiles (and much more) of all the paint schemes is Anders Edbäck’s website covering the Hercules in Swedish service.

Henrik Bergman took the grand tour of Hercules 848 with his digital camera, the youngest in the family, the result of which can be seen below. Henrik works as a technician at the air transport unit at Såtenäs AFB, F7. 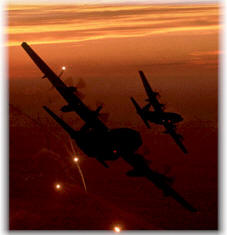 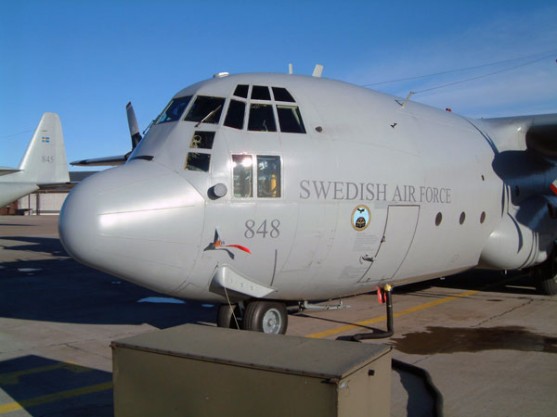 Starting from the front end, we get a good view of the low-viz markings. The box near the nose gear is a flare dispenser that was installed during the Electronic Warfare upgrade. The cylinders in front of the lower windows are sensors for the ALQ 156 SAM warning system. 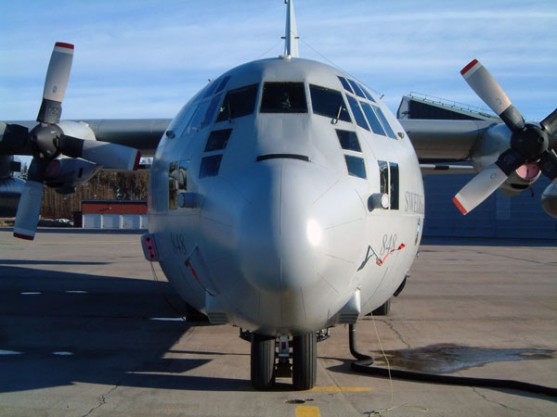 The nose from head-on. The lower flare dispensers and the ALQ 156 sensors are symmetrically placed. Also note the anti-lightning strakes on the radome, a detail worthy of inclusion in your next Hercules model! 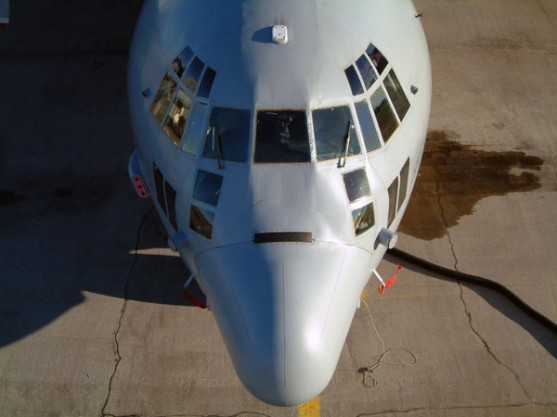 A good view showing the shape of the rather characteristic Hercules nose! Note the black strip protecting the hinges at the interface between radome and fuselage. The white antenna above the cockpit is for TCAS (Traffic collision avoidance system). 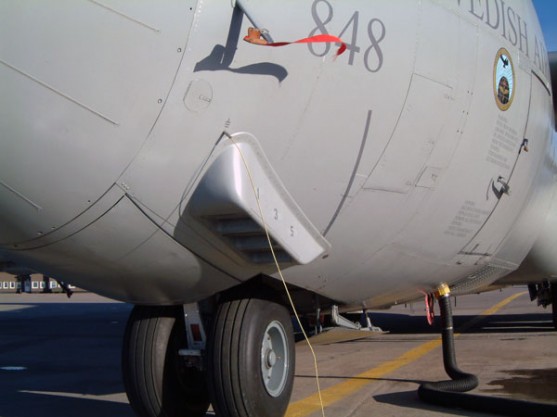 A close-up of the left hand flare dispenser. The thin cable is for grounding the aircraft electrically while the thicker hose supplies dry air to the airframe. 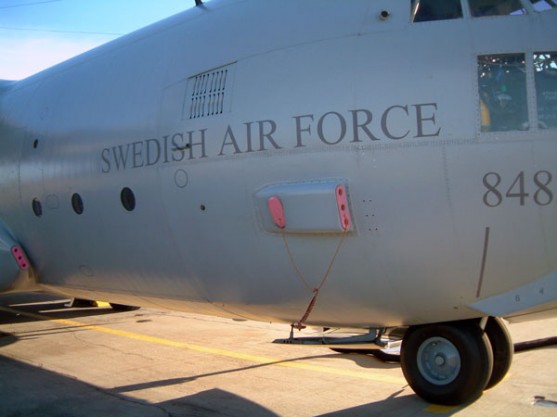 View showing the prominent flight station air-condition inlet. Also worth noting are the outlet gills for the cabin outflow valve located above the ”H” in the ”Swedish Air Force” text. 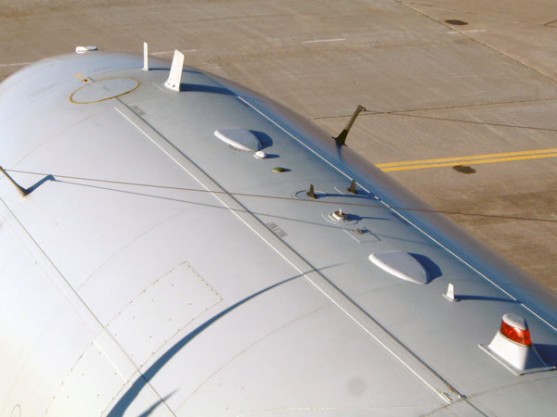 An impressive amount of lumps, bumps and antennae adorn the front fuselage! 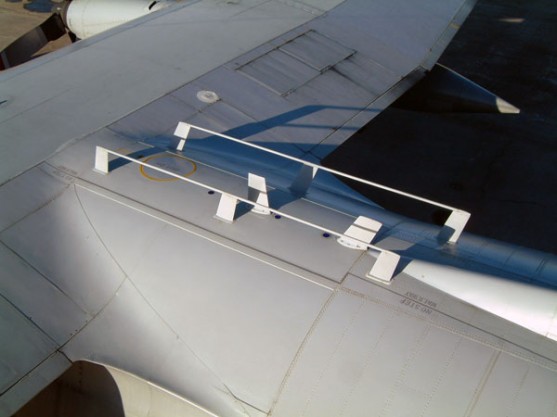 Not that many antennae behind the wing but still a few. Note that the very American-looking ”towel hanger”-antennas are not symmetrical to the fuselage centre-line. The no step demarcation lines are remarkably thin. 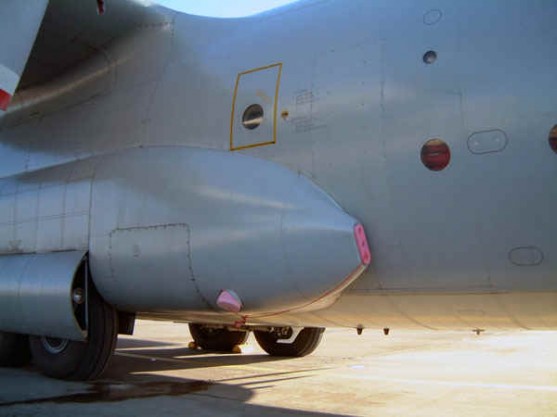 In order not to interfere with the cargo hold, the landing gear were located in external fairings on the fuselage. This is the right hand fairing seen from the front. Note that from the beginning, the prominent intake for the cargo compartment air condition on the front end was just present on aircraft 844 to 848. After a recent modification, all Hercules aircraft have been upgraded with this. 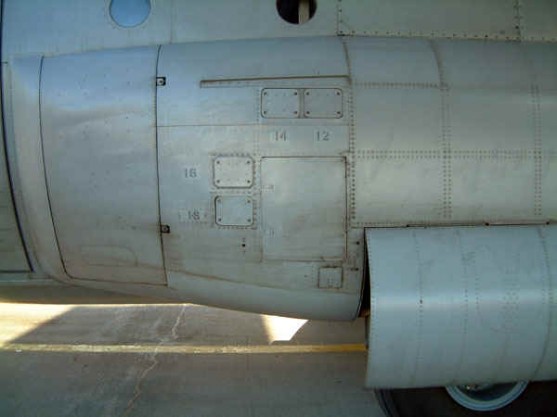 The aft end of the right hand fairing. Note heavy weathering around panels and rivets! The numbered hatches are in fact dispensers for chaff and flares while the large hatch at the rear end is an air stream deflector used when dropping paratroops through the rear doors! 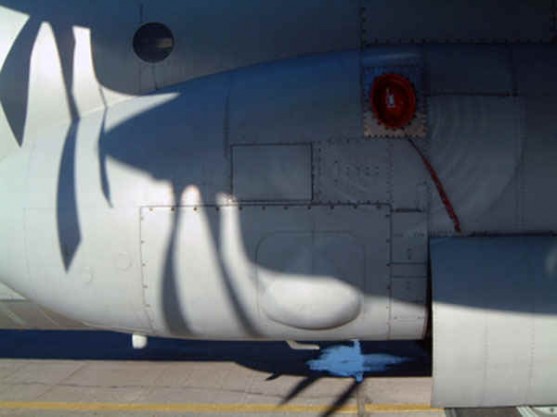 Front end of left hand fairing. Note how the RBF-tag have made circular patterns in the layer of soot and grime on the surface. The natural metal panel is the APU exhaust while the small hatch in the middle of the photo is the air inlet, which is closed while not in use. 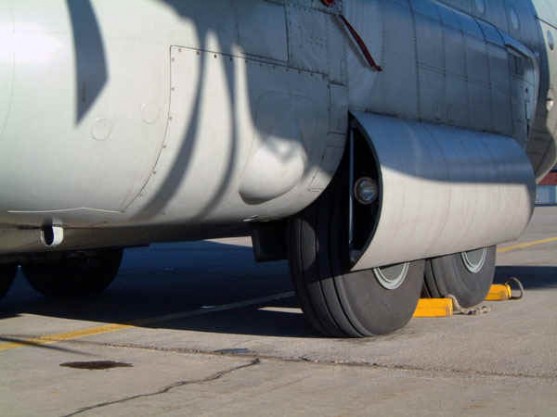 Left hand fairing seen from the front. There is one taxi light on each side. 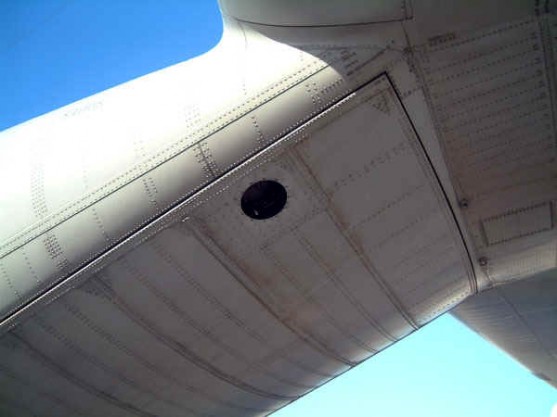 The rear end of 848. The aft part of the ramp swings upwards/inwards in the fuselage while the forward part of it is used to drive on while loading and unloading. The circular hole is the cabin pressure safety valve. 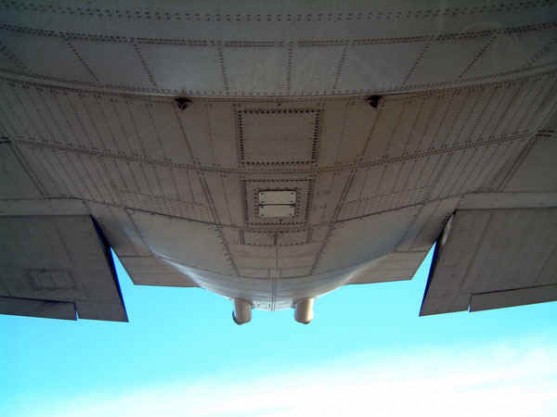 Who said that rivets and panel lines can’t be seen? The rivets make up a very interesting pattern! In the middle of the picture are two chaff dispensers and further aft are two more ALQ 156 sensors. 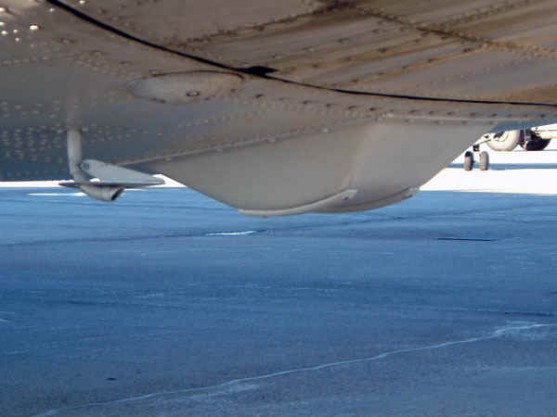 The tail bumper protecting the structure in case of landing in a nose-high attitude. The smaller bump is a support point used when loading heavy cargo and the small tube is an outlet for superfluous bodily fluids!

Our tour around Hercules 848 continues with the engines and a few overall views. 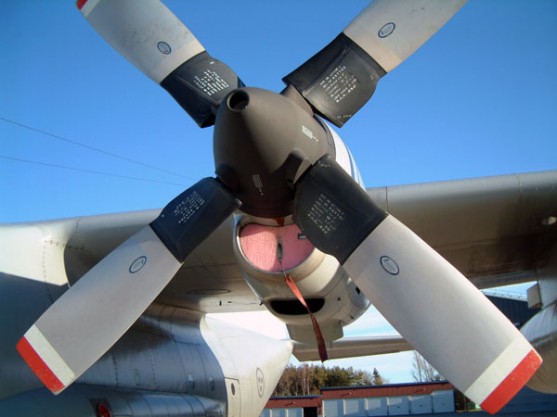 A detailed view of one of the large propellers. Note the amount of stenciling and logos. 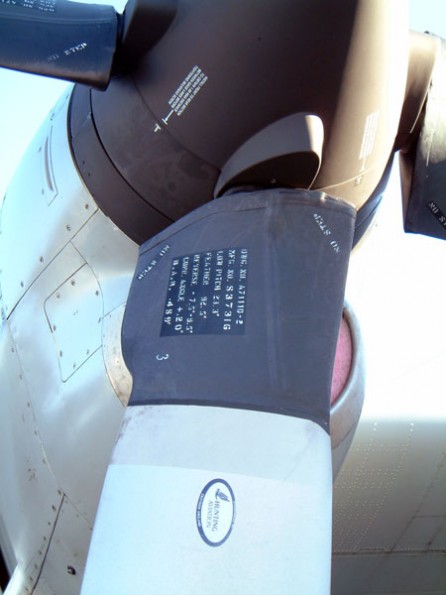 A close-up of the peculiarly shaped cuffs at the blade roots. 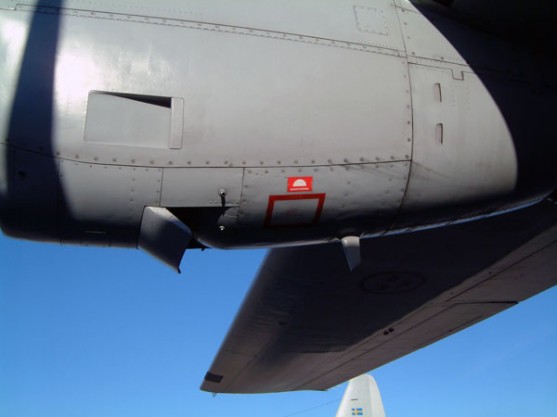 Detail of some of the inlets and outlets of the nacelle. The red square marks a spring loaded hatch used to access the nacelles in case of fire. 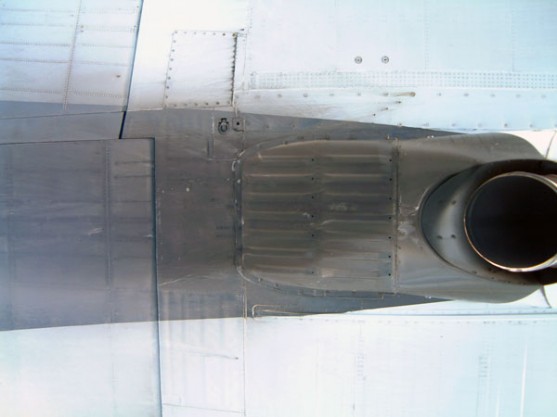 The jet exhaust and the area behind it. 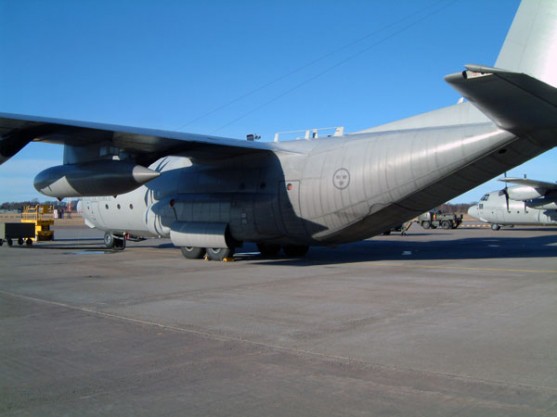 An overall view showing the contrast between a rather clean front end and a remarkably dirty rear! 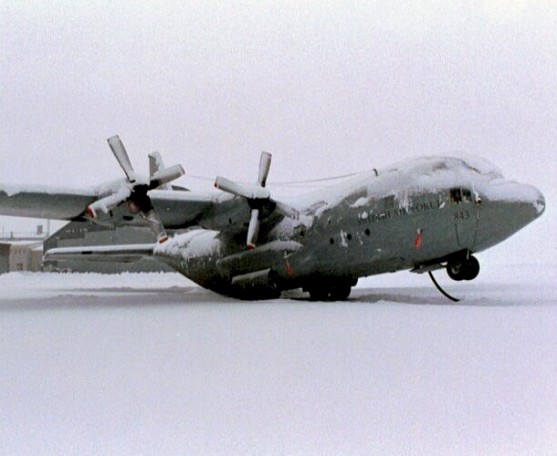 A final reminder not to forget to add nose weight! 843 was found in this condition one morning after a heavy snowfall!

A warm word of thanks to Anders Edbäck for permission to use photos taken by him and Åke Söderberg and to Andreas Stöckl of Austria for letting us use his dynamic air show photo!