Hoppa till innehåll
Hem » Artiklar » Lightnings, and Other Things

I recently visited the Flugausstellung Junior in Hermeskeil-Abtei, a place on the Hunsrück plateau south of the Mosel river (in Germany -Ed.). It is the largest privately owned air museum in western Europe, exhibiting 76+ planes on an area of 65,000 square meters.

Most of the planes stand in the open, unprotected from the notoriously 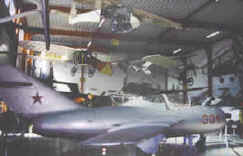 fierce climate and sadly showing it’s effects. The exhibition halls are filled to the brim with the rest of the museum´s vast collection of planes, engines and instruments. The end of the cold war has resulted in a collection being significantly expanded in recent years by the effects of eastern and western disarmament. The notable new acquisitions are Soviet- and British-built planes and helicopters.

Information provided by to the visitor could surely be improved, and the lighting conditions in the halls leave a bit to desire, especially for taking photos. But the collection is surely worth a visit!

One of the most distinctive post-war fighters is without doubt the English Electric Lightning. With its radical shape and remarkable performance it even partially outclassed its successors.

Even with no working afterburners, the prototype exceeded Mach 1on 4 August, 1954. Many years later, a modified Lightning still could win a climbing contest to 30,000 ft even against an F-15.

With its only serious factual setback being its meagre fuel capacity, the Lightning survived for 28 years in the RAF inventory, in spite of bureaucratic obstruction of varying intensity. These obstructions varied from preventing upgrades, secret talks with other countries to prevent the Lightning´s export (for example to Germany) to outright attempts to halt it’s construction.

The longevity of the airframe is even more remarkable if you consider it was originally planned as a mere stop-gap. It was to be the last British fighter before the replacement of manned aircraft by ground-to-air rockets, as proposed in the notorious 1957 paper by defence minister Duncan Sandys.

More information on how the British defence bureaucracy wreaked havoc on both the aircraft industry and the armed forces during this period, including a full account of the ill-fated TSR.2 program can be found on Damien Burke´s excellent page Thunder & Lightnings. This site has extensive material on British post-war planes, highly recommended!

With Airfix´s highly praised new 1/48 Lightning surely in high demand throughout the modelling community, let’s have a closer look at it! 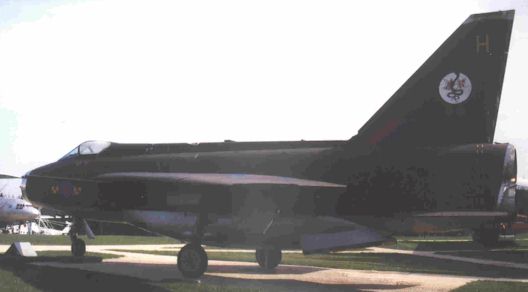 The museum owns two Lightnings, sadly only one of them complete, the other mainly a fuselage.

The complete example, XN 782, an F.2 A originally served with No. 92 Squadron in Germany.

The later designation F.2 A was applied to F.2 airframes upgraded to the F.6 standard. F.6 turned out to be the peak of Lightning development with an enlarged ventral fuel tank, relocated guns plus a completely redesigned wing.
Photo: Frank Spahr 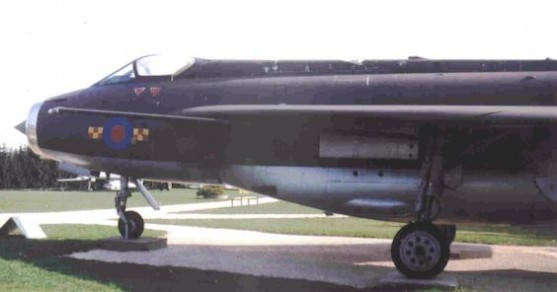 The plane´s formerly green paint has weathered to a chocolate brown, so it can´t serve as a model for color schemes… On the positive side, the aircraft standing in the open is easily accessible right from the air intakes to the tailpipes.
Photo: Frank Spahr 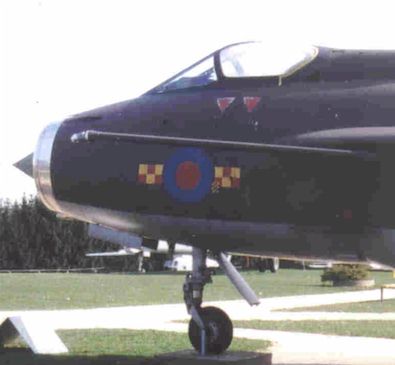 A feature prominent from this angle is the protruding refuelling probe. Photo: Frank Spahr 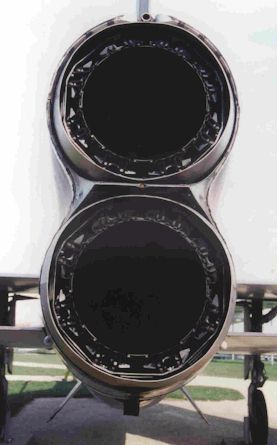 Speaking of tailpipes, here they are. The vertical layout of the Lightning’s engines only emphasises the powerful look of the machine. 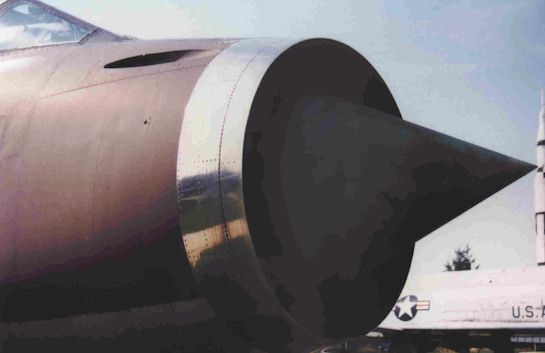 The highly polished bow ring is worth noting as well as the construction around the plane´s cannon ports.

Unfortunately, with the canopy being in bad shape and no ladder available, I couldn´t provide cockpit shots.
Photo: Frank Spahr 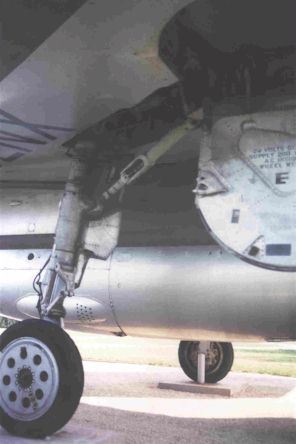 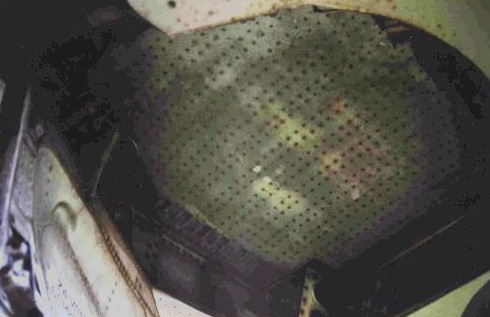 A view inside the wheel wells shows not only details but also the decay that has already taken place in the rough climate.

The wheel wells are surprisingly tidy in layout. The well roof is simply the wing’s upper skin. Photo: Frank Spahr 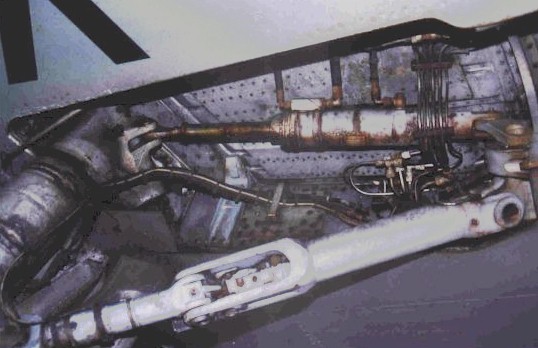 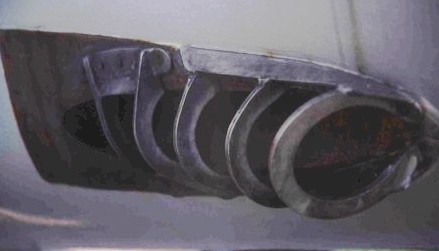 Completing this set of photos, an interesting guard on the fuselage’s underside. Perhaps somebody will know what is, or rather was, it’s purpose… Photo: Frank Spahr 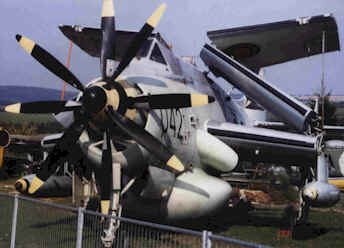 The Fairey Gannet is, to my own eyes, one of the ugliest aircraft I´ve ever seen. I´m sorry to say this, but I think the Gannet definitely lacks grace, especially in the bulged-out version as presented in the museum. Judge for yourself from the adjacent photo! Yet I think it would make a thankful modelling subject.

It’s roots go back to 1943 when Royal Navy expressed demand for a replacement of the Grumman Avenger for the ASW and maritime reconnaissance and surveillance role.

With the pace of technical development dropping at the end of hositilities and then raising again by the beginning of the Cold War, it was not until 1949 that the first, still nameless prototype took off. Only in 1950, after its first successful carrier landing, the plane was christened the Gannet.

Next to its slightly pot-bellied looks, the Gannet´s most distinctive 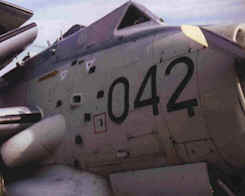 feature was its double counter-rotating props, driven by the twin Bristol Sideley Double Mamba 3700 SHP turbine engines. These engines were entirely independent, each having its own fuel, lubrication, and control system. Once the aircraft was airborne, it was usually flown on one engine,the starboard engine driving the front propeller.

In the mid-fifties, the Royal Navy sought to adapt the Gannet to the role of AEW (Airborne Early Warning). This was achieved by installing an American-built AN/APS-20 radar into a completely redesigned fuselage. A total of forty four AEW Gannets were built until 1963. The Gannet´s somewhat limited flying characteristics surely weren´t improved by the further enlarged fuselage, the extra weight and the bulky radome.

Whereas the ASW Gannets were soon replaced 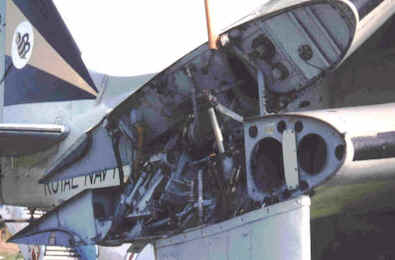 by helicopters, the AEW´s were still used by the Royal Navy on their (real, or should I say classic, or rather conventional) carriers until the decommissioning of the last of them, HMS Ark Royal, in 1978.

The museum´s Gannet is one of the AEW breed. The sheer size of the plane is amazing, plus the volume of the radome and the very small ground clearance. Also of note are the huge exhaust pipes for the turbo engines and the wing folding mechanism.

But the Real Surprise is…

I will conclude with one goodie from the museum´s collection. 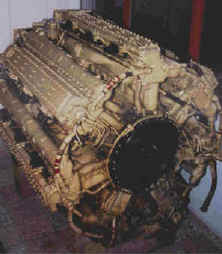 I was amazed to discover this hulking monster of an engine. Somewhat at a loss what it had to do in a plane museum, I luckily found that this item had an explaining note.

The monster is a 1948-vintage 42-cylinder 4-valve diesel engine intended for use in a Soviet bomber never completed. Instead, the engine, rated at 4,000 hp at 2,000 rpm, was used by the Soviet Navy for their torpedo boats.

I wondered how that bomber might have looked like, how many of these engines it might have utilised, how big a crater it would have left on crashing, and finally I remembered the tagline for the new Godzilla movie Size does matter.