This diorama pictures Canadian troops landing at the Juno beach in Normandy. Under heavy bombardment the landing craft is turning back to get another load of troops.

”Juno” was the code name for the second beach 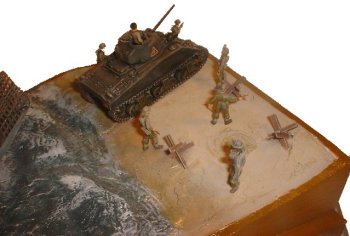 from the left of the five landing areas of the D-Day invasion. The beach was approximately 10 kilometres wide and stretched on either side of the small fishing port of Courseulles-sur-Mer. It was part of the invasion area assigned to the British 2nd Army. The German 716th Infantry Division was responsible for the defense of the area, and the seafront houses offered them excellent observation and firing positions.

The first assault wave landed fully three hours after the optimum low tide. The beach obstacles were already partially submerged, and the engineers were unable to clear paths to the beach. The landing craft were therefore forced to feel their way in, and the mines took a heavy toll. Roughly 30 percent of the landing craft at Juno were destroyed or damaged. At first there was only little opposition from the Germans, but the first wave took dreadful casualties as they moved further in on the shore.

My diorama in 1/76 scale is an attempt to recreate a snapshot of a small piece of the D-Day drama. The boat, boat crew and tank come from Airfix. Used kits were the L.C.M.III and Sherman, which represent the British Landing Craft Mk III and Sherman Mk II respectively. 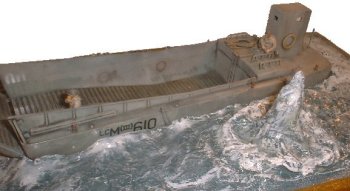 Nothing special to say about the boat, it came together pretty easy. Airfix kits are not really up to today’s standards, the boat was kind of lacking in details but the only thing I added was a piece of rope on the deck. Thorough weathering compensates the lack of detail to some degree.

Similarly, the Sherman kit was really basic, but posed no real problems in assembly. I added a driver (or maybe gunner, anyway it’s someone poking his head through a front hatch). Adapted for the role was a figre of an officer from Matchbox’ British Commandos set. For the tank commander I used the Montgomery himself from another Matchbox set of British 8th Army. 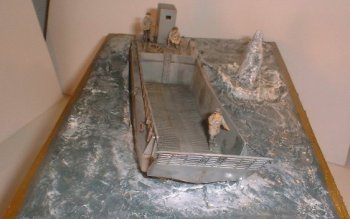 The sea and beach were built and shaped using fine-grade household filler. As the sea defines the scene, I paid special attention to recreating a realistic surface. I didn’t bother to make water transparent since its surface in my scene would be really troubled with heavy surf and all the activity going on. After some consideration I simply formed the waves from filler, pressing in the L.C.M. while still wet for correct float in the water. I also formed a splash from an exploding shell to add tension to the scene. The water was then painted with patches of white sea foam liberally applied all over its surface. I am quite happy with the result, even the water splash looks dynamically realistic.