I must admit that when I first saw a Dragon kit of Horten Ho IX (see the end of this article) a few years ago, I thought ”well, another one of those Luftwaffe 1946 paper aircraft”. Little did I realize at that time that this revolutionary flying wing was actually built and flown in wartime Germany! Having learned this at a later time, the Horten creation became definitely one of the aircraft of special interest to me.

The historians apparently haven’t agreed yet how to call this aircraft. I’ve met designations like Horten IX, Horten Ho IX, Gotha Go 229, Horten Ho-229. Personally, I believe that the designation Horten IX or Ho IX is proper for the development project (previous Horten gliders were called Horten I, II, III… and so on). The official production version (the production being assigned to Gotha factory) would be Go 229, not Ho 229.

Walter and Reimar Horten were pioneers of the tailless all-wing aircraft, and built a succession of beautifully graceful sailplanes with outstanding performance in 1936-40, followed by examples with two pusher engines. Their practical experience in building flying wing aircraft was at that time unique in the world. In 1943 Walter Horten became interested in constructing a high-speed aircraft of wooden construction. Reports from Prof. Lippisch’s DFS 194 (later Me 163) tests at Peenemunde convinced him that even wooden aircraft could carry jet or rocket engines. In August 1943 he met Hermann Göring, and the project was approved.

The first prototype Horten IX V1 was build in a glider configuration. It was completed in only six months, and test-flown for the first time in February 1944 in Göppingen.

Parallel to the fight tests of V1, a second prototype was being developed. The V2 was powered by two turbojets. Of mixed construction, it incorporated some improvisations. BMW 003 engines were used instead of planned Jumo 004. The large front wheel was fashioned from tail wheel assembly of Heinkel He 177, and main landing gear was borrowed from Bf 109 G.

Horten IX V2 being prepared for the first flight.

The first flight was made in Oranienburg on February 2nd, 1945. The test pilot was Erwin Ziller. It showed reportedly very good handling qualities, with only a shade of lateral instability (as we know today a typical deficiency of tailless aircraft). The second fight itself was equally successful, but the undercarriage was damaged by the brake parachute during landing. Two weeks later, on the third flight a disaster struck. Ziller took off as before to perform flight tests, when at 800m one of the engines stopped. The pilot was in control of the situation and pushed the aircraft into a shallow dive to help re-start the engine. Suddenly at 400 meters undercarriage retracted, after which the aircraft lost speed and went out of control. Erwin Ziller was killed in the following crash, and the prototype completely destroyed. 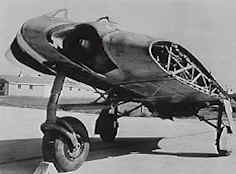 Almost-completed Go 229 V3 as found by the American troops in Fredrichsrode factory.

Despite of this setback the project continued with sustained energy. The prototype shop has been moved to Gothaer Waggonfabrik (Gotha) in Friedrichsrode. In March 1945 work commenced on the third prototype, the Go 229 V3. The V3 was larger than previous prototypes, the shape was modified in various areas, and it was meant to be a template for the pre-production series Go 229 A-0 day fighters, of which 20 machines had been ordered. V3 was powered by two Jumo 004C engines, and could carry armament of two MK108 30mm cannon in the wing roots.

Too late for the Luftwaffe, though, U.S. forces overran the Gotha factory on the 14th April 1945 and found an almost completed, but not yet flown, V3 there. Four more machines, Go 229 V4, V5, V6 and V7 were in various stages of completion, the V4 and V5 being two-seater prototypes of the projected night-fighter version.

The Americans took the V3 to the US, and it was obviously a great material to study. Amazingly enough, the V3 has been preserved to this day. The photos below show Gotha Go 229 V3 stored at NASM’s Paul E. Garber Restoration, Preservation & Storage Facility in Silver Hill, Maryland. 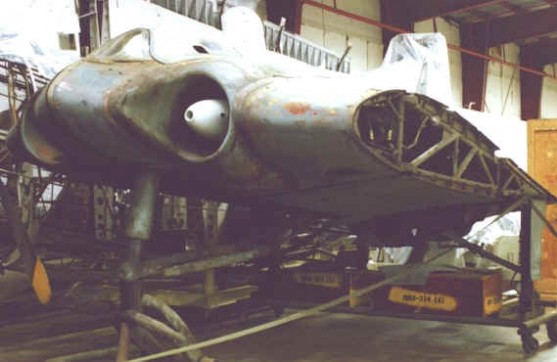 This is how the sole remaining Go 229 flying wing is stored today. It appears complete, but has been disassembled. Wings are detached, and wheels have been removed from all three undercarriage legs. Photo: The Virtual Hangar 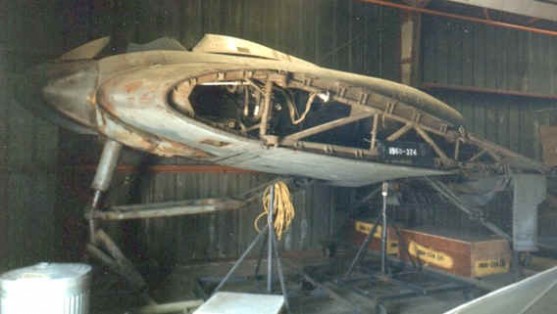 Side view of the fuselage (centerplane?) reveals a great deal of internal wing structure. Basically, Hortens designed their aircraft as they wood design a wooden glider.

This profile view also shows the way in which the two engines are ingeniously hidden within the wing. Photo: The Virtual Hangar

Looking at the same part of the aircraft from the rear. The author suspects that the swastikas were not a part of the original paint scheme.

The wooden-covered parts of the airframe are not in good condition. Hopefully the full restoration program for the Go 229 to be restored to display condition will commence soon. 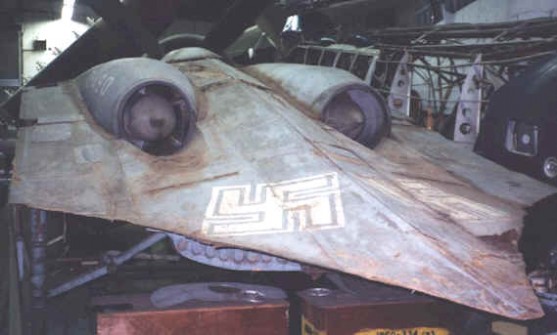 Another view of the tail shows a pronounced fuselage spine, and the blast tubes of two Jumo engines.
Photo: The Virtual Hangar 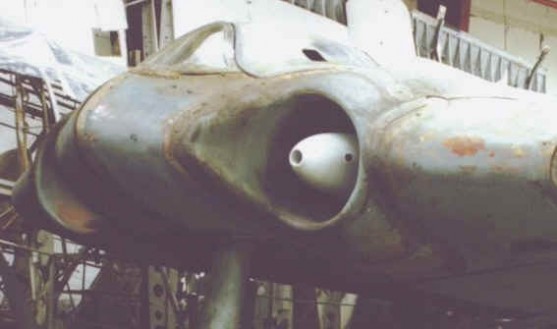 Two close-ups showing a distinctive profile of the nose, engine intakes and windscreen. 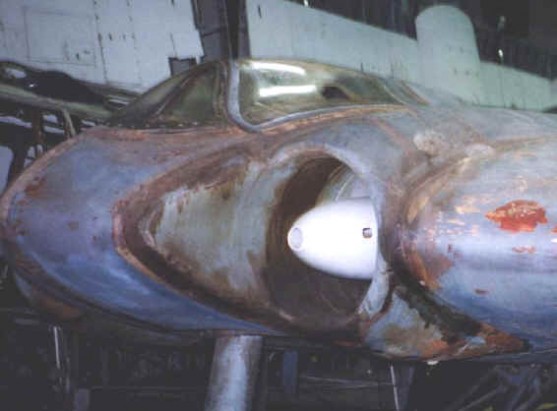 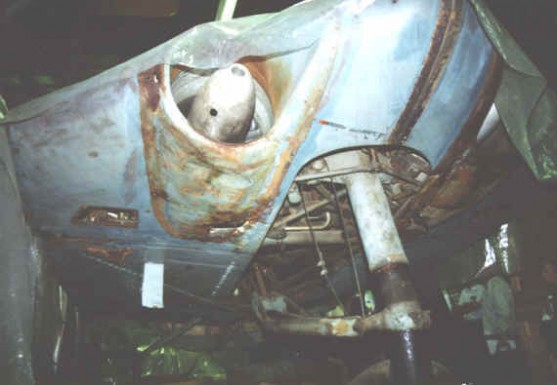 A glimpse into the main undercarriage well. The untidy layout is apparent. The front wheel was, unusually, of massive dimensions, designed to carry the bulk of the aircraft’s weight and landing stress. Photo: The Virtual Hangar 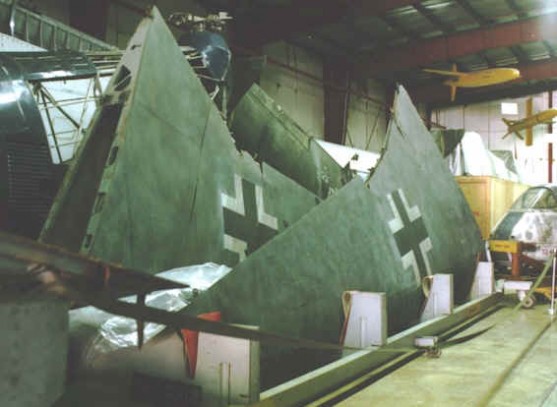 The aircraft’s swept-back wings are stored separately. The wings are entirely plywood-covered.

Of note is that the ailerons and flaps have been removed from their hinges. The hinges attachment points can be seen at the trailing edge of the nearer wing.

Even here, the author could not determine whether the Balkenkreutz markings and the camouflage are original, or have been added later. Photo: The Virtual Hangar 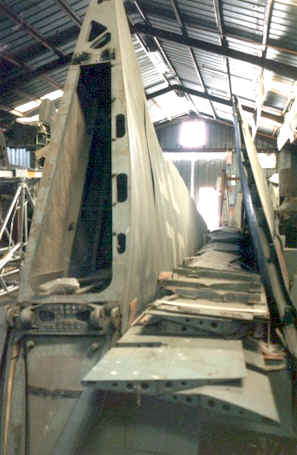 To the right of the wing there is also a set of ailerons and flaps mentioned above. 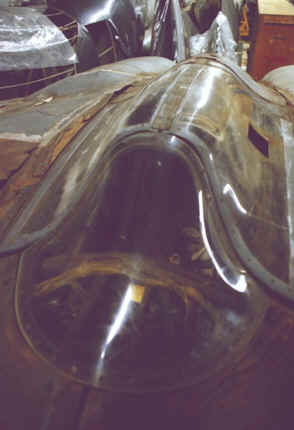 Everything about this aircraft was unusual, even the shape of the cockpit canopy. The armoured glass plate was to be built-in behind the curved windscreen, much in the way it was done on Me 163 rocket fighter. 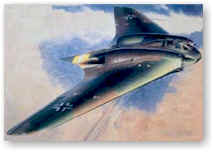 For the modeller wishing to build a scale replica of this unusual craft, thereare following options: