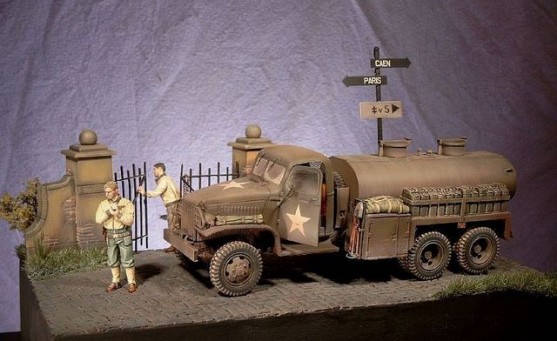 One of the true workhorses of WWII, the GMC “CCKW” went into production in February 1941, and when the last rolled off the production line in August 1945, more than 500,000 had been made. Approximately 1167 were converted to water tank trucks, to carry drinking water to the frontline troops, and is the subject choice of this feature.

Italeri continue to re-release some of their older kits and while this is more than 20 years old, it still holds its own today. The kit (#201) features the enclosed metal cab version and offers a nice alternative to the open-cab version from Tamiya.

The kit consists of about 180 parts in dark green plastic, while windows and headlights are offered in clear plastic. Moulding quality is good overall, with the ejector marks mostly in places that are not seen after assembly. The parts have remarkably little flash, considering the age of the kit, with fairly good detail all round. The lower chassis is made up of all separate parts, so care is needed when assembling the long side beams and chassis cross-members to ensure it is completely square and level, as this will determine the sit of the completed model. As usual with kits from Italeri’s “Golden Era”, the drive trains of vehicles are very well detailed. Leaf spring units, axle and differentials, drive shafts and steering rods are all separate parts. 10 wheels (all in plastic), fuel tank, pump compartment and front fenders as well as the exhaust pipe all build into a very busy chassis and suspension with nice detail definition.

The cab interior is pretty basic with front bench seat, driver’s levers and steering wheel, but no foot pedals. Both the doors are separate parts with clear window inserts as is the separate windscreen frame. The latter can be shown open if desired with the small side supports to add to the screen frame. The top of the cab and the engine hood are moulded as one piece with a separate lower rear cab wall. The engine bay side panels have nicely defined cooling vents, although solid. The fit of the assembled cab to the chassis can be tricky, so keep the front grill separate so it can be adjusted slightly at this point.

The water tank itself presents no serious assembly problems. Gluing both halves and forcing them together until some soft plastic squeezes out, ensures a solid fit and no gaps left. The same method was used to add the top and both ends. A quick brush over with Mr. Surfacer makes sure there are no gaps and hides any sanding work. The filling ports on top, the back hose compartment and spare wheel assembly gives the water truck it’s distinguishing features. A fun kit to build, and with a little care, makes for a very nice model. 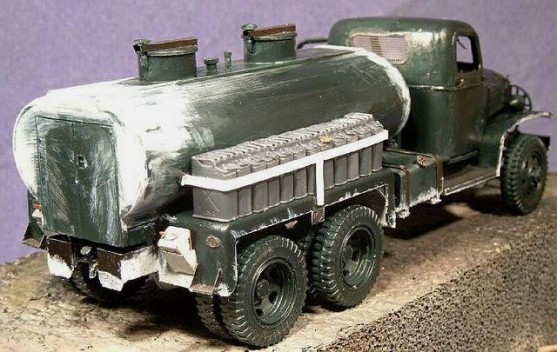 The only photo-etch specific for this kit is Eduard set nr. 35273. As with all etched sets, it’s up to every individual to decide what they will (or can) use. Some parts add a little finesse, like the fuel tank cap, meshes for the back window and radiator front, cab interior and other small details missing from the original kit. Some parts directly replace out of scale items around the vehicle and are a welcome addition considering the kit’s age and moulding restrictions of the time. Other parts like the steering wheel assembly and side grills for the engine, being only two-dimensional, offer no improvement at all.

Personally, I use the parts that are fun, and when it starts to become tedious, its time to leave the remaining frames on the pile, with all the other half-used etched sets. The Eduard’s set not as insane in detail as a typical Aber set, and could be used to the full by modellers with some etch experience. The entire front grill can be made with parts supplied, but some quick sanding of the original plastic part was both easier and quicker. The tool rack and straps included added a nice detail to the finished model, although there are no pioneer tools supplied in the Italeri kit. 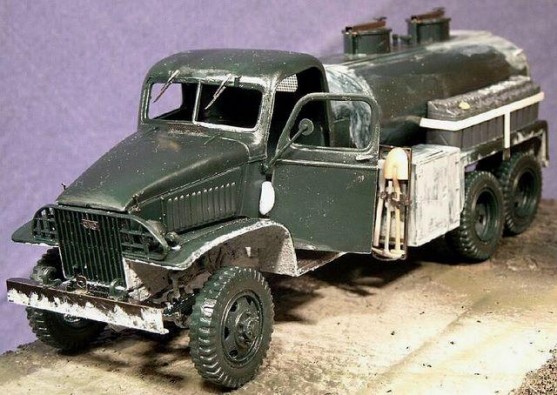 Surfing around the Internet I found an image of a reconditioned water tank truck that carried a row of jerry cans on each back mudguard. I thought this was a nice detail to individualise my model. 2 boxes of Italeri jerry cans were needed as 12 fits on each mudguard and there are only 12 American cans in each of the Italeri sets. The frame was made easily from suitable plastic profile strips.

To finish off the model, a few pieces like pioneer tools, tarps and a bedroll were sourced from the spare part bin.

The chassis and under the front mudguard are pretty visible on this model. To simulate the dirt build-up and give the dirt a three-dimensional appearance I used a product from Eberhard Faber called Granite Farbe. This is an acrylic paint with small specs of granite dust in the mix. Dabbed on with an old stiff bristle brush, It also hides any unwanted ejection points and location holes! Small details can be left clear, so there’s no risk of losing any details that are visible. 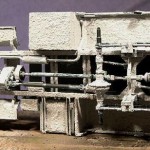 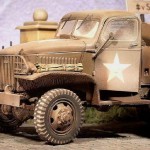 Application of dirt and mud to the chassis

The base model was primed firstly with a hobby-primer aerosol can from a local car accessory shop, to give a uniform base to the different colours and materials. Then the base colour of Tamiya Olive Drab (XF-62) was sprayed over the entire vehicle. Successive coats had increasing amounts of Desert Yellow (XF-59) added and spraying was now concentrated more in the middle of panels to show the fading of colour, due to wear and the conditions. The underneath was sprayed randomly with Flat Brown (XF-10), Earth (XF-52) and Buff (XF-57). Tyres were sprayed black (XF-1). Isopropyl alcohol was used as thinner for the Tamiya paints. 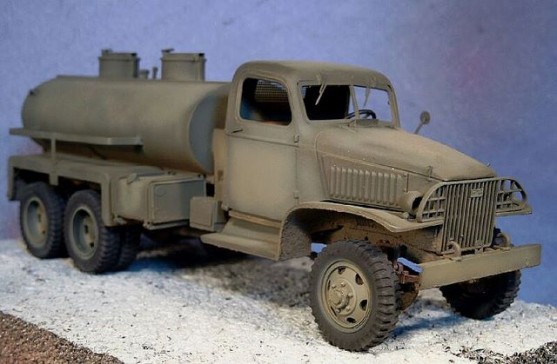 The model after the application of base coat.

Then details were painted using Humbrol enamels. The leather seats were first painted in a light buff colour and were then painted over with burnt umber oils. The oil paint was brushed on heavily and after 40 minutes brushed off again with a clean, dry brush. This resulting seat has a vibrant and natural, leather finish. Removing more paint around edges gives a realistic, worn look.

The wooden shafts of the pioneer tools were painted in a similar way but using burnt sienna instead. When the oils are brushed off again, scoring the still wet paint with a sharpened toothpick gives a nice, natural wood effect.

At this stage all raised detail received a light dry brush with a lighter version of the base colour and/or a metal and silver mix, to give a metal effect in some places. Dry-brushing at this stage means that the following steps will tone down the harshness of this method, but the raised detail will remain slightly exaggerated. The cab was also fixed permanently to the chassis at this stage.

To prepare for decals and washes, the entire model received a coat of Johnson’s Klear. This is an acrylic floor polish and acts as an excellent varnish. Can be sprayed or brushed on, direct from the bottle. When dry, the kit’s generic US decals were added, using some Micro Sol and Micro Set to help them settle down nicely. When fully dry, another coat of Klear was sprayed on to protect the decals. Taking time to prepare a good gloss surface for decals will help avoid any unwanted “silvering” effects. Silvering is the used term, where the carrier film for the decals is visible, usually caused by air bubbles trapped under the decal film.